One of the best things about this job is getting to meet some of the smartest people in the world of finance, and they don’t come much smarter than Dr Gerard O’Reilly.

After earning a doctorate in Aeronautics and Applied Mathematics from the California Institute of Technology, he joined Dimensional Fund Advisors as a Research Associate in 2004 and became Co-CIO ten years later. Last year he was appointed as Co-CEO, along with Dave Butler.

I recently caught up with Dr O’Reilly at Dimensional’s London offices, where he gave me a rare and wide-ranging interview. I’m running the interview in two parts. This is Part 1, in which he sets out Dimensional’s approach to investing; I’ll post Part 2 next week.

RP: Dimensional’s philosophy is very much based on academic evidence. Briefly, what sort of evidence are we talking about? And why is it so valuable?

GO’R: Academic finance is a discipline with a long and rich history. It’s been around for 50 to 60-plus years, and we at Dimensional have been involved with a lot of the great minds of academia over the past number of decades. What academics have really tried to do is understand the function of markets, how markets work, what drives prices, and what information you can get out of prices for publicly traded securities, and they’ve gone about answering those questions in a very theoretical, robust and empirically-driven way. So we can really address these questions with as many scientific methods as possible.

RP: What would you say to people who argue that academic finance is theoretical, but that financial markets are about the real world?

GO’R: I would agree. Academic evidence has to be, in some respects, theoretical. Academics come with models of the world, and those models are usually incomplete. But you gain insights about the real world from those models — insights about better ways to invest, better ways to structure portfolios — so that when you come to the real world you’re better equipped to make rational investment decisions. Academia, by its nature, has to simplify the real world, so that you can understand the real world better. But that’s the beauty of it. Academics simplify the world just enough so that it’s real enough to be interesting, but understandable enough that you learn something.

For Dimensional, I would say that pretty much everything we do has a theoretical and empirical foundation — for example, in terms of how we structure portfolios, how we identify differences in expected returns, and how we go about managing those portfolios from day to day. A lot of that is based on academic finance, but we couple that with very practical experience, because you have to interact with markets, you have to understand regulation and the various frictions in markets. I think Dimensional does a great job of pairing those academic insights with a very structured way of investing, and a lot of knowhow on how to execute efficiently in real markets. 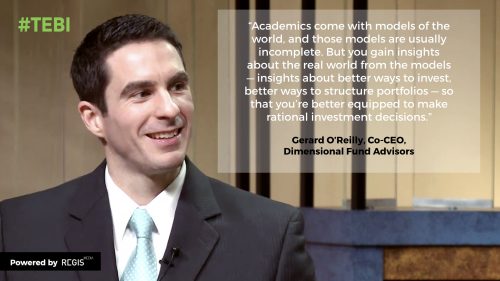 RP: For you, who are the most important academics you work with?

GO’R: There are a number of absolutely outstanding names in academic finance we work with. I won’t name them all but I’ll mention a few. Gene Fama, who won the Nobel Prize a few years ago, is an academic that we have been very closely related to since the founding of the firm, along with Ken French, who is a co-author and a very close collaborator with Gene Fama. What we’ve used from their work is the intuition that it’s given us about prices. Security prices reflect information, and in particular we think that different stocks have different expected returns, and different bonds have different expected returns. French and Fama’s work has helped us tremendously in using real-time security prices to say which assets have higher expected returns and which have lower expected returns.

Other academics we’ve worked with are Robert Merton and Myron Scholes, both of whom have also won a Nobel Prize. Their work has also given us tremendous insights, whether it’s in life-cycle finance, or how to structure portfolios.

So that’s to name just a few of what I call the greatest academics in finance, and there are many more that we’re associated with and work with. The work that they have done has really led to some big innovations in the field of practical investing that Dimensional has been able to use to the benefit of our clients. 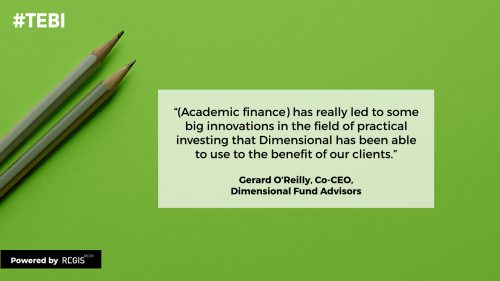 GO’R: We look at up-to-the minute research, and how we approach research is like this. We need to have a good rationale to expect something in the data. How do academics answer problems? They pose the problem, they set up a model to help study the problem, they get empirical data to test the model, and then they determine if the data rejects the model. If the data does not, they may have a good working hypothesis that allows them  to learn something about the problem they posed. That’s the scientific process we use.

When it comes to differences in expected returns, what the Three-Factor Model did was it helped organise the historical data to show systematic ways to pick up differences in expected returns across stocks. So, should you use a new model every year? Well, there are some things that stay the same, and some things that change. So Dimensional changes where we need to change, and where we don’t need to, we don’t.

We don’t think investors are suddenly going to stop demanding differences in expected returns. We think it’s very unlikely that every stock in the world will have the same expected return at some point in the future. Unless that happens, you’re always going to have size, value and profitability premiums.

But what changes is how you go about identifying which stocks have low relative prices, and how you go about identifying which have high expected cash flows. Those things evolve as accounting practices evolve, as data evolves, and as you get better and better data. But the underlying principle of the Three- and Five-Factor Model has been around for hundreds of years and will be around for hundreds of years.

RP: As you say, Dimensional’s focus is on delivering higher expect returns through exposure to specific risk factors. But as Fama has himself said, the broad, market-cap-weighted index is still an excellent starting-point, isn’t it?

GO’R: I would agree with Gene 100%. If you are investing in an entire market in a cap-weighted portfolio, that’s a pretty good investment. There’s nothing wrong with that investment.

When it comes to increasing expected returns, you want to do so in a very careful way. Because the market is a very good portfolio to own, as you go about increasing expected returns by pursuing size, value and profitability premiums, you don’t want to end up with a portfolio that’s inferior to the market, that’s a lot less diversified, that has much higher turnover, or that has much higher costs. And what we’ve been able to do at Dimensional is pursue those premiums in a very diversified, cost-efficient, low-turnover way, so that people can expect to consume more in the future by investing in funds that pursue these premiums than they would by just investing in the market. That’s really what we’re about. We’re enabling people to retire either earlier or with a better standard of living in retirement, and I would say that’s the main reason for anyone to pursue higher expected returns.

RP: If people do go down the factor investing route, should they be looking to capture one particular risk premium, or a combination of them? And how many is too many?

GO’R: That’s a great question. You really have to examine what each new variable brings to the table. Does it improve your understanding of expected returns and, in particular, differences in expected returns across stocks? And does that enhanced understanding allow you to build a better portfolio? That should be considered case by case.

So, as an example, Dimensional started off with small-cap portfolios back in the early ‘80s, and added value in the ‘90s, and then in the 2000s we added profitability. Each one of these enhanced our understanding of what drives differences in expected returns, and enabled us to build portfolios that were still diversified but that were better and more reliable, as you added a new premium.

Ultimately, the more premiums you pursue, the marginal impact they’re going to have on the portfolio is going to diminish. It’s all about expected cash flows and differences in prices. That’s the motivation for all those premiums. Then, for us, the question is, how can I say something more precisely about the expected cashflows, or differences in prices? That’s where the evolution comes along.

If you’re into 30 or 40 or 50 factors, they’re all interacting with each other, and it’s not clear what you’re getting in that sort of portfolio. As few as possible to describe the world well is Dimensional’s preferred position.

In Part 2 of this interview, I’ll be asking Gerard O’Reilly:

Why is patience so important for investors, and factor investors in particular?

What, if anything, should investors be doing in response to recent all-time market highs?

Finally, should investors use a financial adviser? And how does an adviser add value? 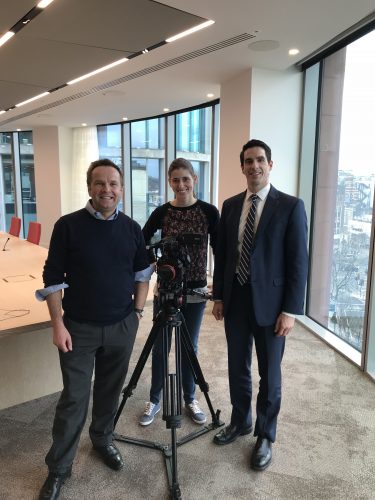 Gerard O’Reilly, on the right, with Robin Powell and Regis Media’s Christina Waider

Are you a financial adviser who shares Dimensional’s evidence-based approach to investing?

Then why not subscribe to regular, high-quality video content, customised for your firm, that’s designed to help you attract, retain and educate clients? You’ll find details and prices on the Regis Media website and explanatory videos on our YouTube channel.