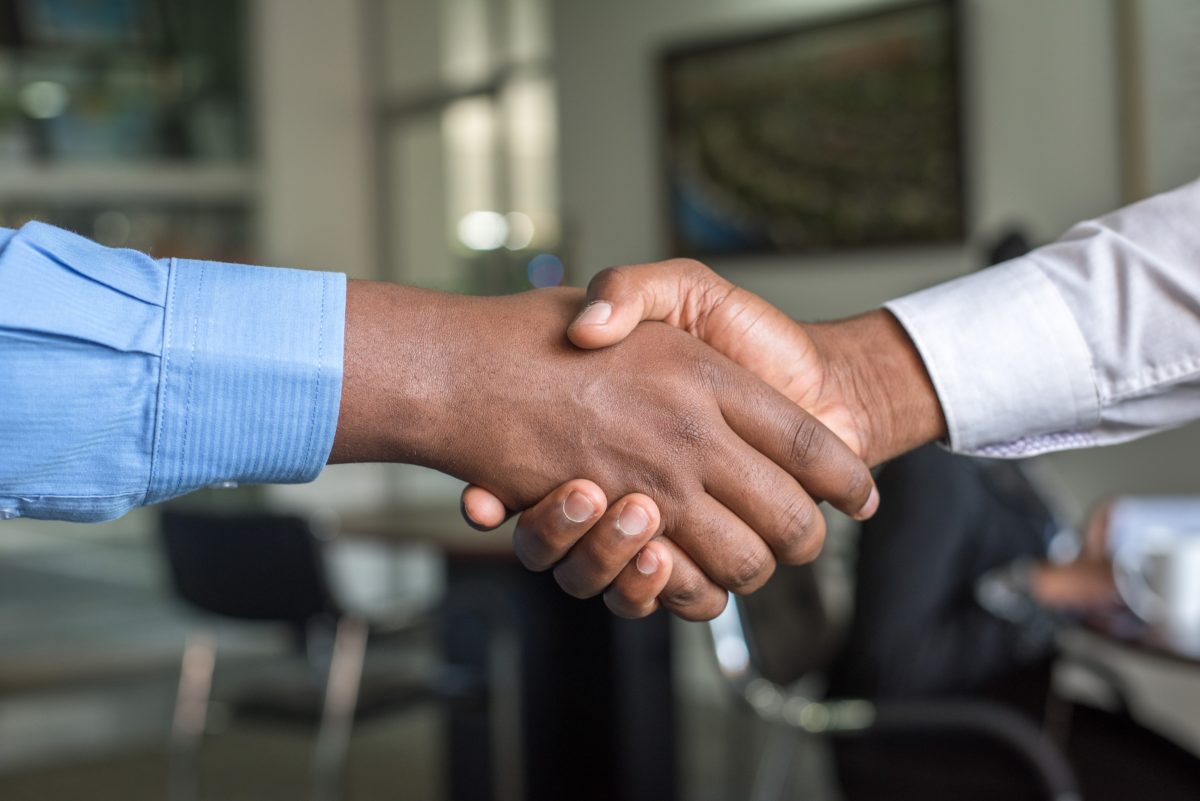 TEBI readers often ask me if I can recommend a trustworthy financial adviser. I always try to help them. I know of good advisers all over the world, so there’s usually someone not too far from where they live whom I can suggest they talk to.

The problem is, I can only help them so far. That’s because there are two aspects to choosing the right adviser:

1. establishing whether they are competent; and

2. deciding whether you can trust them.

The first component is relatively straightforward. As John De Goey explained on this blog the other day, it’s largely a matter of asking the right questions. If you aren’t 100% satisfied with the answers, you should steer well clear.

Carl Richards recently weighed in on this issue too, in a series of posts on Twitter. “How do I find a real financial adviser?” he asked. (Real financial advisers, I should explain, is the term Carl uses for advisers who don’t sell financial products and don’t claim to have a market-beating edge.) 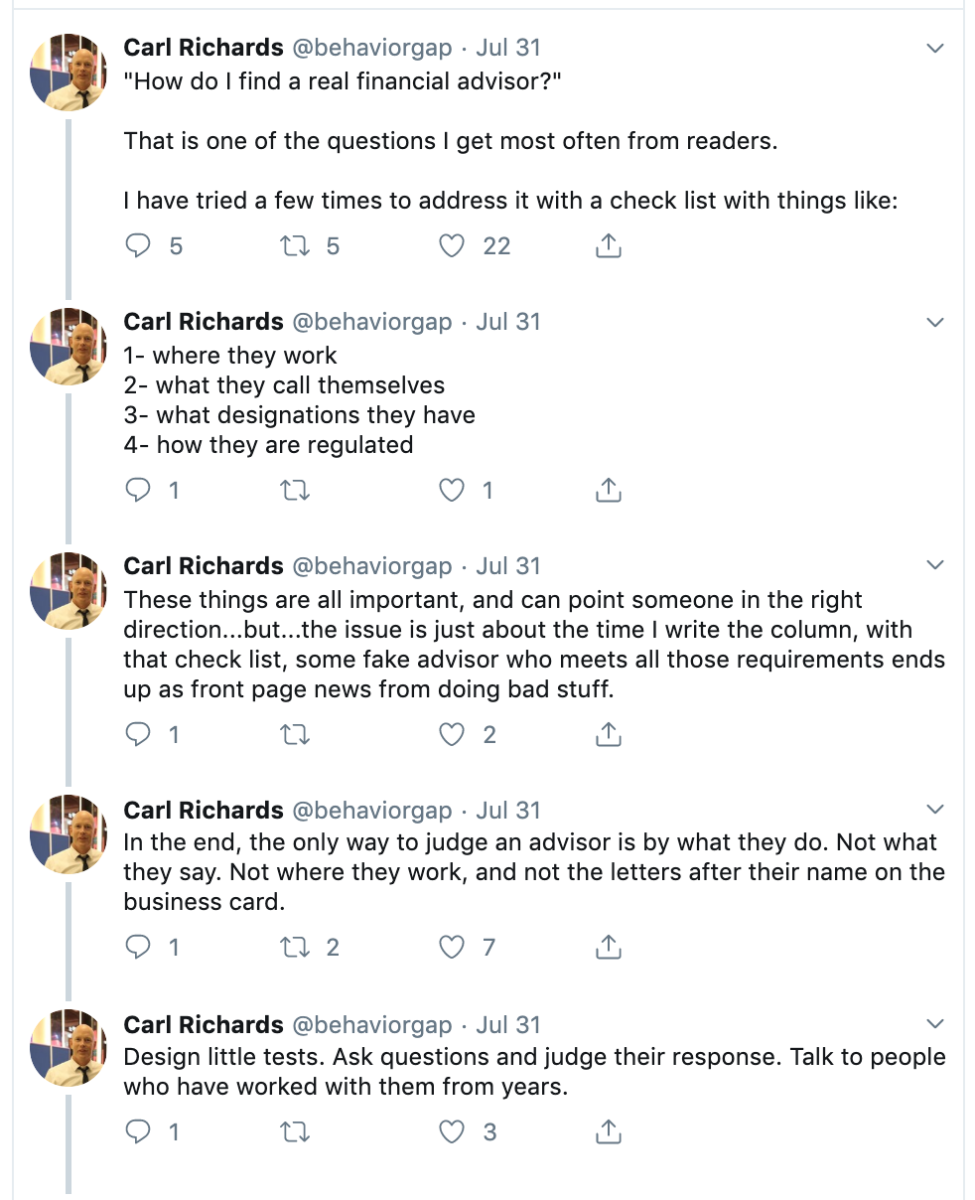 Then, one final instruction, and probably the most important of all:

But, as I mentioned, there are two components to this decision. We’ve so far only dealt with the first. The second component is very much more subjective. You and I — and Carl Richards for that matter — may have a very different impression as to whether a particular person is trustworthy.

Either you instinctively feel comfortable entrusting your financial affairs to someone or you don’t. Ultimately, only you can decide.

We recently interviewed a very smart guy by the name of Herman Brodie. Herman is an author and consultant who specialises in the subject of trust in financial services.

In this four-minute video, Herman explains what you can do to help you find a trustworthy financial adviser who you feel comfortable with.

There are two aspects to choosing an adviser, says Herman Brodie. The first — establishing their competence — is relatively straightforward. But the second — deciding whether you can trust them — is much more subjective.

This video was produced for Index Fund Advisors in California by Regis Media. An evidence-based financial planning firm, IFA is a strategic partner of TEBI’s in the United States.

If you haven’t yet visited the IFA.com website, I strongly urge you to do so. It’s an amazing resource, loaded with every academic paper, article and chart you could possibly need to become a thoroughly informed investor.

Financial author and consultant Herman Brodie is an expert in adviser-client relationships.

Trusting your adviser, he says, will give you much more peace of mind.

Herman Brodie says: “So, if I trust my adviser or I trust my asset manager, the riskiness of the whole enterprise we’re doing together is actually diminished. So my level of anxiety is reduced.

“Now, a lot of bad things can result when we are overanxious about the engagements we are involved in. And financial markets are fraught with all of the kinds of things that we as human beings find the most disagreeable. And this often leads us to do precisely the wrong thing at the wrong time.

“Now if we perceive the whole riskiness of the engagement to be reduced because we trust the person who we’ve confided with our assets, then, of course, this brings an enormous amount of reduced stress for clients.”

Sadly, some advisers in the past have proved themselves to be far less worthy of trust than others.

If trust in your existing adviser has broken down, it’s very different to rebuild.

Herman says: “When you get advisers, for example, pushing products that are very expensive when there are cheaper alternatives, or because they are tied to a particular product issuer. Or even in medical professions, where doctors have been seen to be prescribing particular medicines because they are taking kickbacks from the pharmaceutical company.

“It’s evidence therefore that they are actually not acting in my interests at all, they are acting in their own selfish interests. And this damages the perception of benevolence. And those perceptions are very very difficult to recover.”

Herman Brodie says there are two components to trusting an adviser. The first is a conscious decision: Is the adviser competent? The second is more sub-conscious: Does the adviser have my very best interests at heart? Ultimately, though, you have to trust your gut instinct.

Herman says: “At least with the conscious part of that evaluation, in terms of, you know, the skills and training, and let’s say the fiduciary responsibilities that that adviser takes on board. On paper, that adviser must stack up, so the competence measure must at least be satisfied. But, whether you are going to perceive that person as benevolent or not, it’s largely non-conscious, I cannot tell you how you are going to feel about somebody.

“Who I’m going to be able to be open with is probably going to be somebody different to you. And as a consequence, you just have to go with your gut. There is no secret formula for identifying benevolence. Everybody sees benevolence in a slightly different place.”

So, you should choose a trustworthy financial adviser who is clearly competent, but also one who will put your interests ahead of their own. Only you can decide if someone ticks both boxes.