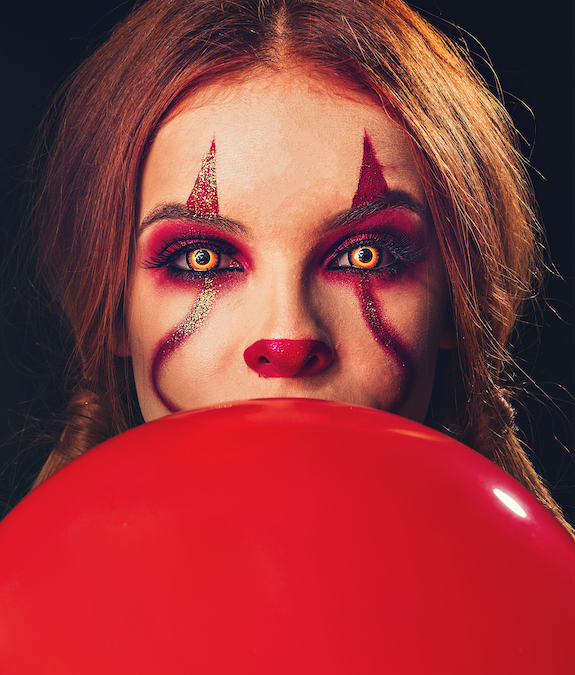 Nearly 80% of fund managers, according to a recent Bank of America survey, think stock markets are overvalued.

Are they right? Or does this simply mean that around four out of five managers missed the market rebound and are desperately hoping to be vindicated? Or perhaps they’re hoping for another opportunity to get back in if markets fall again?

CHRIS BENNETT from S&P Dow Jones Indices has been analysing a number of factors, including the outperformance of growth stocks, lower interest rates and other stimulus measures. When you look at the bigger picture, he says, stock markets are nowhere near as overvalued as some commentators are suggesting.

Stock markets continue to rally globally, ascending a wall of poor economic data and significant negative sentiment. Concern that current price levels are unjustifiable is widespread: 78% of respondents to the most recent Bank of America Global Fund Manager Survey believe that the market is overpriced, the highest level since the survey began in 1998. Are current levels truly that far off base?

One response to this question is a relative one: with benchmark yields near all-time lows, the growth potential of equities has become more attractive. Stocks are up, in other words, because rates are down.

This affirms financial theory: the lower the discount rate, the greater the present value of future earnings, and thus the greater value of company equity (all else equal). And while individual company discount rates differ, the overall interest rate environment drives them all. 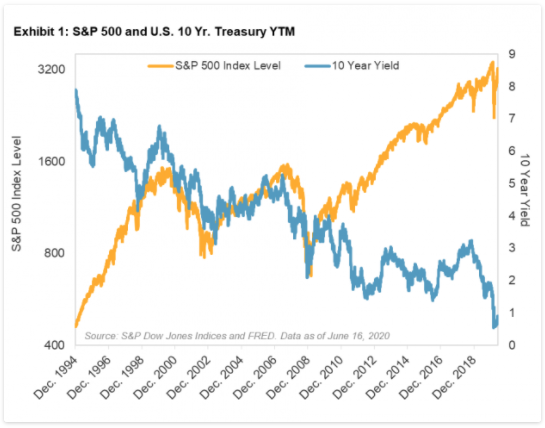 Growth’s outperformance of Value offers further support for a yield-based perspective on valuations. Since July 6, 2007, when the ten-year U.S. Treasury closed at 5.19%, yields have plummeted. So has Value’s relative performance.

Valuations of growth stocks, by definition, rely on earnings projections in the distant future, which gives them a higher sensitivity to discount rates. That Growth’s relative performance seems to be following U.S. Treasury yields offers another indication of the wider equity market’s current sensitivity to rates. 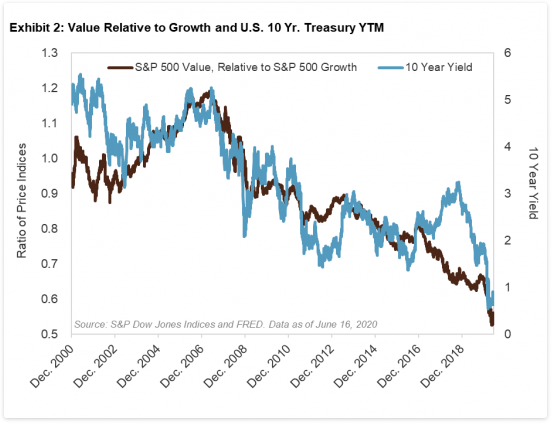 Stimulus efforts have also been fundamental to the recovery in equities. In the U.S., the Federal Reserve’s balance , and is poised to continue to grow until the economy is firmly back on track. Other central banks have taken a similar approach, including the Bank of Japan (BoJ), the European Central Bank (ECB), and the People’s Bank of China (PBoC).

Combined, those four central banks have added ~$4T to their balance sheets since the end of February; that’s more than Germany’s annual GDP.  These efforts have propped up the valuations of riskier assets, including stocks, by pushing investors up the risk curve in search of returns. 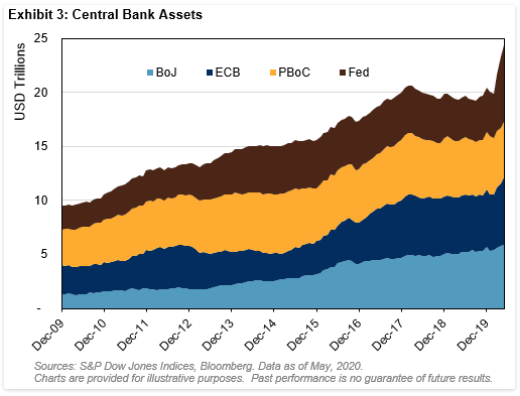 Markets look forward, not back

Central bank efforts have mitigated, but not erased, the impact of the global lockdown: historically weak data have poured in, highlighting the economic (and human) impact of the pandemic.

While troubling, these data are inherently backward looking; they highlight the past, in part because they are often reported with a significant lag. Equity valuations, on the other hand, are forward looking, attempting to encompass the value of all future cash streams generated by a business. It is possible, in other words, to believe that the future is bright despite being surrounded by dismal current data.

Of course, current valuations are unlikely to be perfect. Prices are generally wrong; they fluctuate more widely than the flow of new information would require. More importantly, it is famously difficult to tell what the right price should be, and on what timescale the market might “correct”.

It’s arguable that declines in yields, coupled with fiscal and monetary stimulus, have produced a justifiable current valuation for the equity market.

This article was first posted on the Indexology Blog and is republished here with permission.

The economy and the stock market are not the same thing?

In recent weeks, the researchers at S&P Dow Jones Indices have been reporting on the performance of active fund managers during the coronavirus crisis. Here are their findings: