“One of the greatest frustrations for me,” writes the investment author Larry Swedroe in his latest post for ETF.com, “is that, given the overwhelming amount of evidence against active management, a majority of investors keep playing a loser’s game.”

I’ve written about this on TEBI many times, but what is Larry’s take on it? He actually presents four explanations.

The first, he suggests, is that “the education system has totally failed the public”. Ideally, young people would learn about investing and the financial markets in school and college. In the event, “many obtain their ‘knowledge’ about investing from the very institutions — Wall Street and the financial media — that don’t have their interests at heart, because the winning strategy for them is when investors play the game of active investing.”

Secondly, Larry blames people’s unwillingness to invest the time and effort to learn what they need to know. So instead of reading a book by, say, William Bernstein or Jack Bogle, they prefer to listen to the financial gurus trying to predict the future on the likes of CNBC. “There’s an all-too-human need,” says Larry, “to believe there is someone out there who can predict the future and thus protect us from uncertainty.”

The third explanation Larry gives for why investors continue to ignore the evidence is “the Lake Wobegon effect — the need and/or desire to be above average”. Of course, we all like to think of ourselves as being above average. High net worth investors, in particular, want to feel special.

“Wall Street plays on that need,” says Larry. “You hear the repeated lie that goes something like this: ‘Indexing is a good strategy, but it gets you average returns. You don’t want to be average. We can help you do better than that.’

“The truth is that indexing doesn’t get you average returns; it gets you market returns. And because it does so with lower costs and greater tax efficiency, by definition, you earn above-average returns.”

I agree with Larry Swedroe on all three of those points. But it’s his fourth and final explanation for why people continue to use active funds that I found most interesting. It’s to do with self-justification. 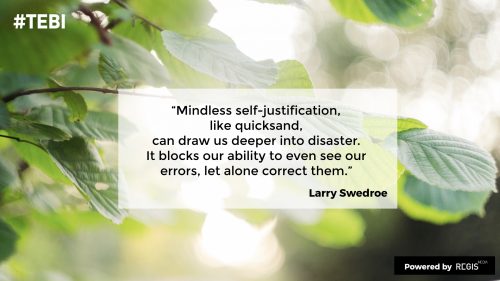 In his post, he quotes a book by social psychologists Carol Tavris and Elliot Aronson called Mistakes Were Made (But Not By Me). “Most people,” the authors wrote, “when directly confronted with proof that they are wrong, don’t change their point of view or course of action but justify it even more tenaciously. Politicians, of course, offer the most visible, and often tragic, examples of this practice. We even stay in an unhappy relationship or merely one that is going nowhere because, after all, we invested so much time in making it work.”

As Tavris and Aronson point out, self-justification, by itself, is not necessarily a bad thing. “It lets us sleep at night,” they write. “Without it, we would prolong the awful pangs of embarrassment. We would torture ourselves with regret… We would agonise in the aftermath of almost every decision.

“Yet mindless self-justification, like quicksand, can draw us deeper into disaster. It blocks our ability to even see our errors, let alone correct them. It distorts reality, keeping us from getting all the information we need and assessing issues clearly.”

We’re seeing plenty of self-justification at the moment from the active fund industry and from advisers and another investment professionals who advocate active strategies. The figures for active fund performance are bad and they’re getting worse. But because livelihoods and profit margins are threatened, the industry will continue rehearsing the same old myths, and refuting the evidence ever more vigorously.

Active investors, on the other hand, both retail and institutional, have a choice. You can carry on repeating the same old mistakes, or you can admit those mistakes, change course and increase your chances of achieving your investment goals.

Be honest. This is a relationship that promised much but has probably delivered little. It may have worked for your adviser and the different fund managers they’ve recommended over the years, but it hasn’t worked for you. It’s time to walk away.

Admitting you’ve got it wrong isn’t easy. But it’s liberating, and active investors will almost invariably find themselves better off financially for doing so.