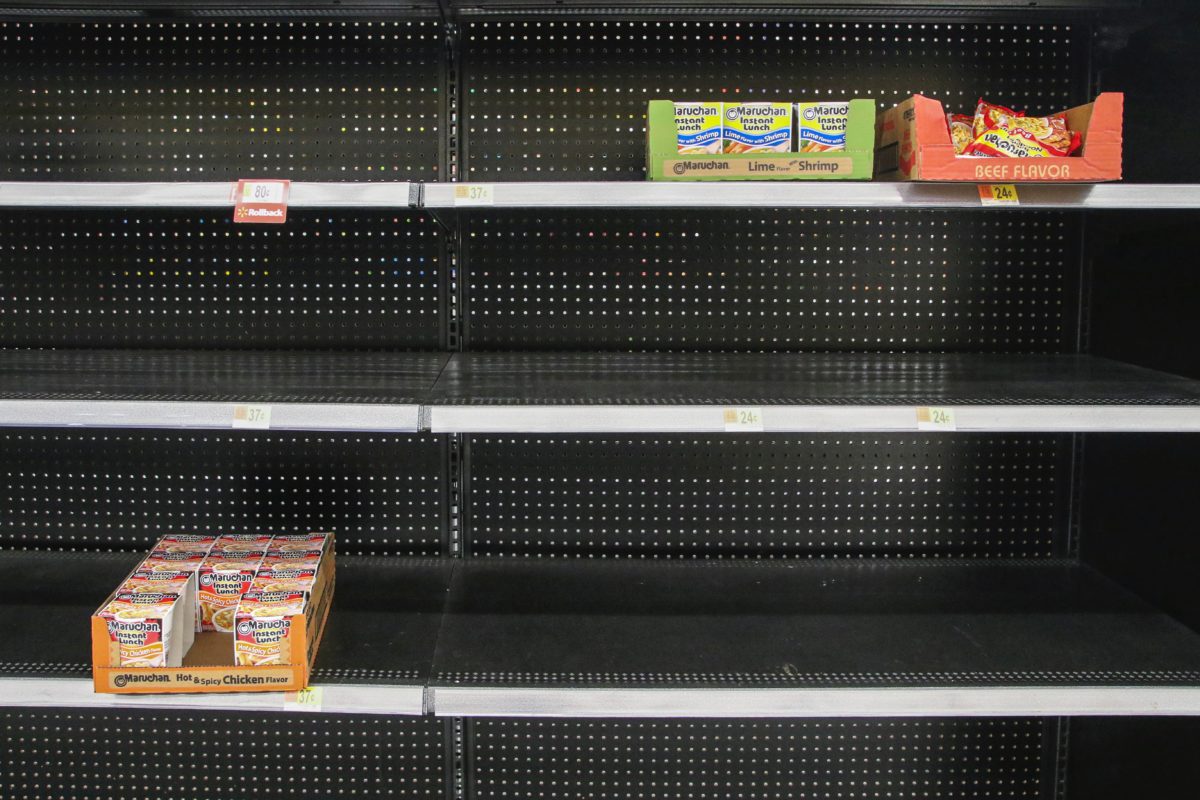 Periods of extreme market volatility can be very uncomfortable. It can be hard, after significant market falls, to stay rational and level-headed. But it’s very important at times such as this to see the bigger picture.

GARRETT QUIGLEY is Managing Partner of Global Systematic Investors. He has more than 25 years’ experience of managing quantitative investment strategies, and previously enjoyed a long career as a senior portfolio manager with Dimensional Fund Advisors.

In this quest post for TEBI, Garrett puts recent market falls into an historical context and discusses the implications for investors now.

The effect of the coronavirus crisis on the economy and society in general around the world has already been profound. Governments have announced the closure of schools, universities, restaurants, bars and other social venues.

In many countries, severe restrictions have been placed on freedom of movement in an effort to limit the spread of the virus. Many businesses have ceased activity in response to a drastic reduction in demand. Overall, the downturn is expected to be at least on a par with that during the Global Financial Crisis of 2008-9 with some forecasting an even deeper contraction.

Central banks have made a co-ordinated effort to mitigate the economic impact. On March 15, the Federal Reserve announced a reduction in the Fed funds rate to effectively zero, a drop of 1%, having already cut it by 0.5% two weeks previously. It also announced a major $700 billion bond buying program to help stabilise the market. Other central banks around the world have also cut rates, including the Bank of England, which cut the base rate to 0.5% and then again to just 0.1%. Numerous additional measures have been announced in an attempt to deal with the inevitable shock to demand and the risk to financial stability. In the UK, the government has promised to pay the wages of private sector employees affected by the downturn.

Markets have reflected this with significant falls in equity prices and also by exhibiting very high levels of volatility across equity indices, with steep falls followed by a partial recovery, followed by yet more falls while the market tries to establish a level consistent with new information as to how the virus is impacting the economy.

Some specific industries have felt the impact of the coronavirus more than others. For example, hotels, cruise lines and airlines have been badly affected to name a few. On top of this, there has been a dispute within OPEC related to managing the supply of oil in order to mitigate the effect of lower demand. The outcome has been that Saudi Arabia has significantly increased its supply of oil just when the market is facing a major demand shock, which is already putting pressure on the oil price. The consequence has been a slump in the oil price leading to severe declines in the share prices of oil and energy-related companies.

Faced with these conditions, the market is pricing in much higher levels of future volatility. A key index of expected volatility in the US market is the VIX index which is listed on the Chicago Board of Options Exchange (CBOE). This index is derived from listed options contracts on the S&P 500 index and is designed to estimate the implied level of volatility that is being used to price those options. A chart of the history of the closing price of the VIX index is shown below. The data covers the index as far back as 1986. 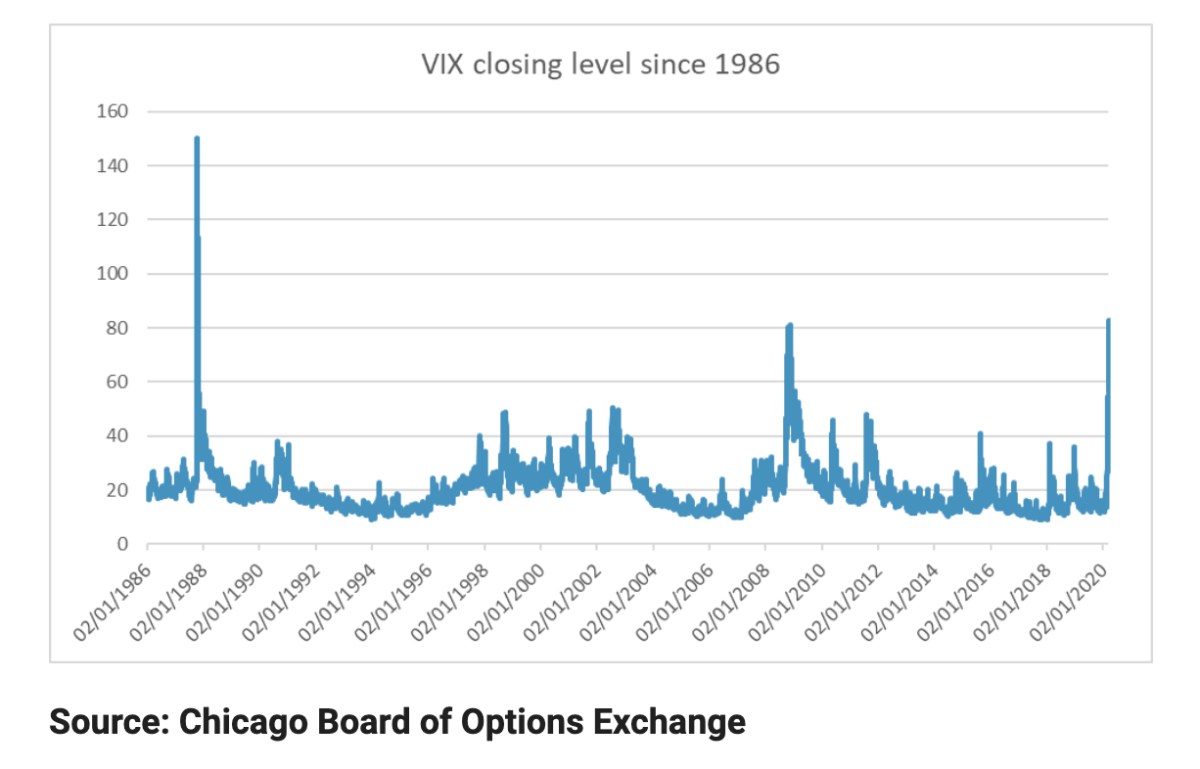 As can be seen from the chart, the average of the index is around 20 and it rarely goes below 12. There are many times that the index has gone above 40, which is an indication of significantly heightened stress in markets. Periodically however, it spikes up to even more extreme levels as economic shocks have arisen such as the October 1987 crash or the Global Financial Crisis of 2008. On March 16 this week the VIX closed above 80 despite the efforts of the authorities to calm markets. Indeed, Wall Street trading was suspended again on March 18 after another fall of more than 5%. Markets are therefore exhibiting very high levels of stress commensurate with previous periods of extreme turbulence in financial markets.

In the past, stock prices have adjusted to these levels of risk and the chart below tracks the closing price of the S&P 500 index over the same period as shown in the VIX chart. Note that the scale of the y-axis is logarithmic since this shows proportional changes in return as similar in scale through time. During the crash of October 1987, the market fell by 112 points from its previous peak of 337 on August 25, 1987, which was a 33.2% fall. On March 20, 2020 the S&P 500 closed at 2304.9, a fall of 1081 points from its recent peak of 3386 on February 19, just 22 days before. However, whilst this drop is almost 10 times larger in terms of points compared to the crash in 1987, on a percentage basis it was 31.9% since the starting level of the index was so much higher. As the chart also shows, the percentage falls from peak to trough during other major bear markets were greater still. During the tech crash from March 2000 through October 2002, the peak to trough fall was 49%; and during the GFC the peak to trough fall between October 2007 and March 2009 was an even greater 56.8%. 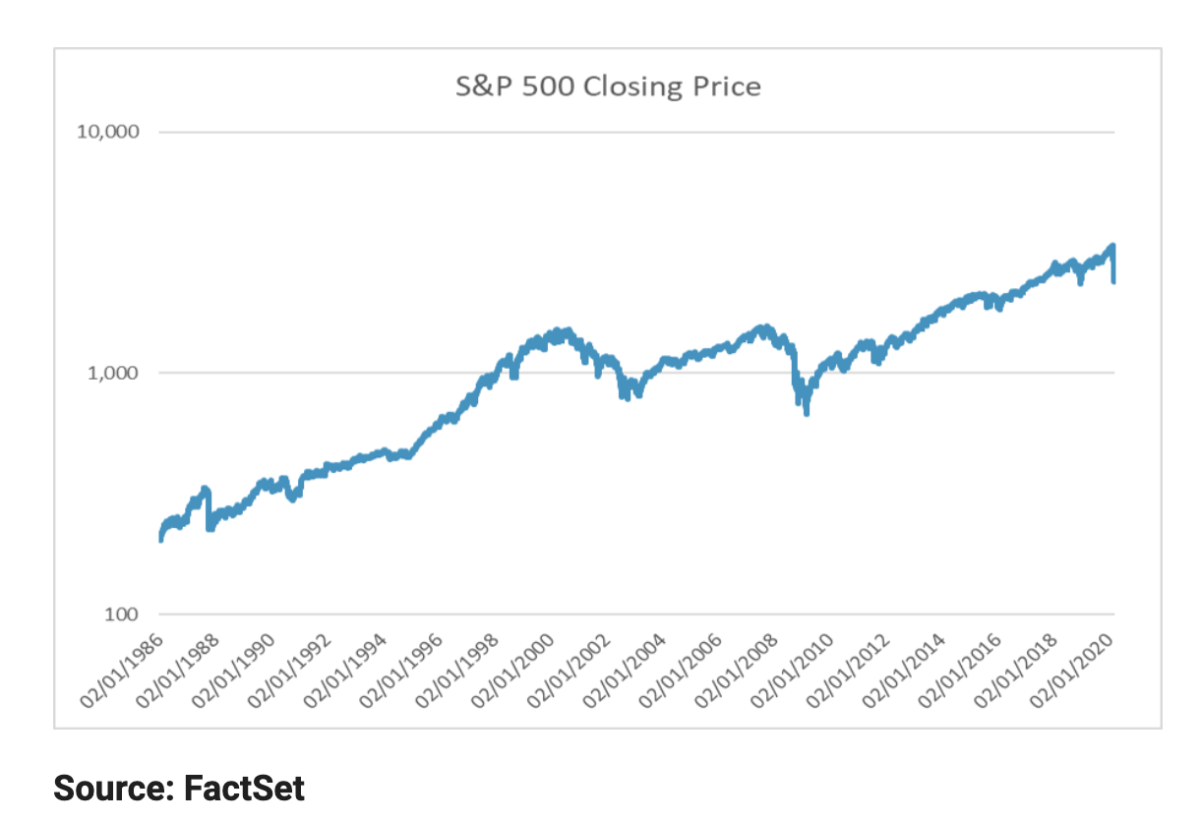 In the 1987 crash, the market fall was relatively quick, and the recovery started almost immediately. The fall after the peak of the tech bubble was rather more drawn out, but that period also covered a short recession as well as the events of 9/11. After 9/11 (in 2001) the market recovered again from its fall, through to 2007/2008 which was the onset of the GFC. The spike in the VIX during the peak stress period of the GFC was similar to the level reached this week. That is not to say that that the market may yet fall further, as it did during the GFC, although that is clearly possible. It is safe to say, however, that the market is already pricing in severe disruption to the economy and financial markets. As we have seen, in previous cases when the market was in this state, prices subsequently recovered. Those investors who held on and rode out the turmoil were eventually rewarded. Moreover, trying to time the onset of recovery would have been extremely difficult at the time – just as it is now.

For an even longer-term perspective, we turn to an authoritative academic source which is compiled by Elroy Dimson, Paul Marsh and Mike Staunton who studied the returns of key asset classes over the last century in their classic study Triumph of the Optimists which they update every year. The chart below shows the cumulative returns (in US dollars), adjusted for inflation, from 1900 to the end of 2019 for a composite of World equities, World Bonds and US T-Bills. 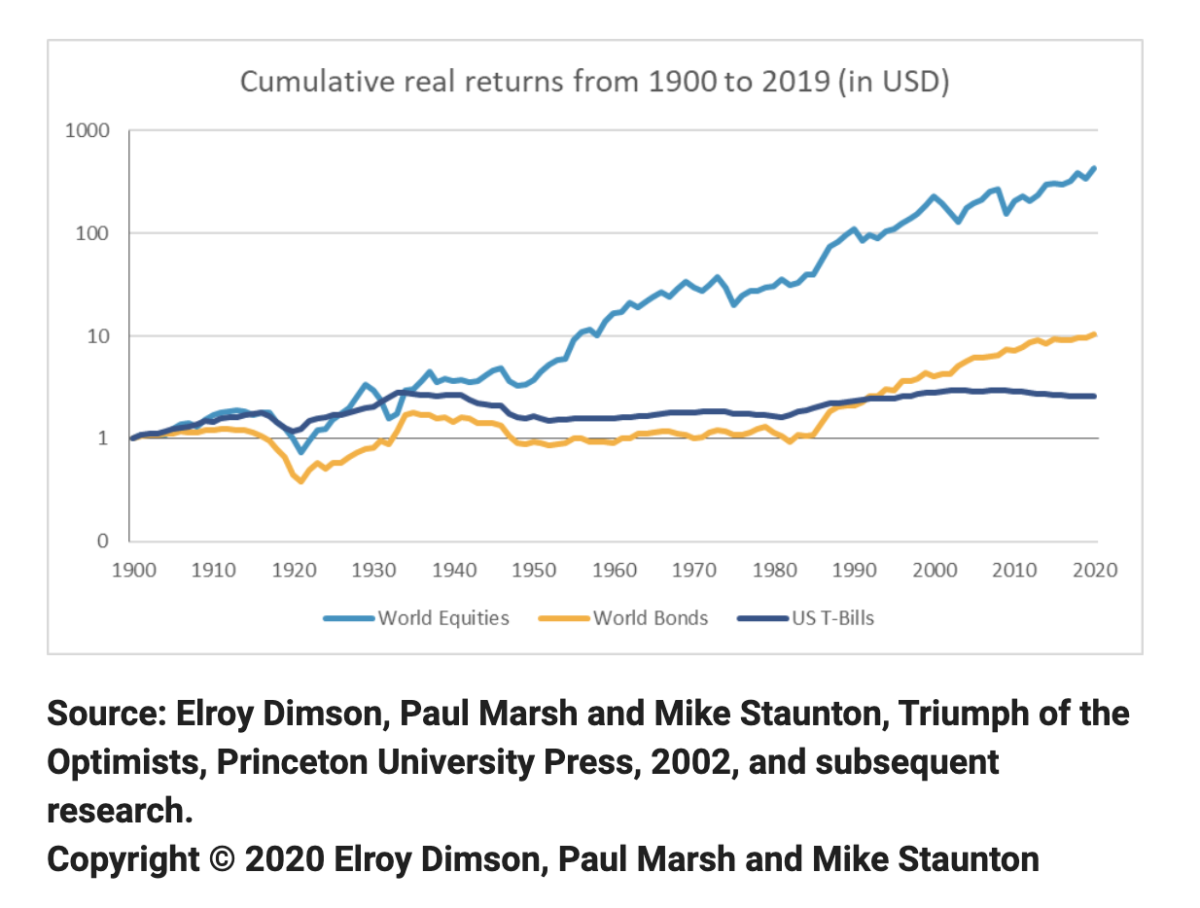 From the chart, we can see periods throughout the last century where markets have fallen significantly during, for example, US depressions in the 1920s and 1930s, the two world wars, numerous recessions and the Oil Crisis of 1973, as well as the more recent downturns we’ve covered already. The compelling message from this chart is that despite sometimes uncomfortably long periods of negative or flat returns, investors who stuck with equities eventually reaped the reward. The returns from “safer” asset classes were relatively meagre. While bonds may have benefitted since the 1980s, this was mainly due to the efforts of central banks to rein in inflation. The prospective nominal returns from government bonds today are very low indeed.

It is worth remembering that at times like this, trading is likely taking place between investors who may be stressed, or are forced to sell, and those who have a longer-term perspective and a disciplined approach to asset allocation. Investors therefore benefit from ensuring that their exposure to riskier assets is consistent with their appetite for risk in general. This highlights the key role that financial advisers can contribute in helping clients navigate the markets in these turbulent times.

This post was first publishes on the Global Systematic Investors blog and is republished here with GSI’s kind permission.

If recent market falls have left you feeling confused or anxious, you may find these other articles helpful:

The prescription for living in a time of uncertainty

Nine points to consider on the outlook for equities

The only option is to keep buggering on