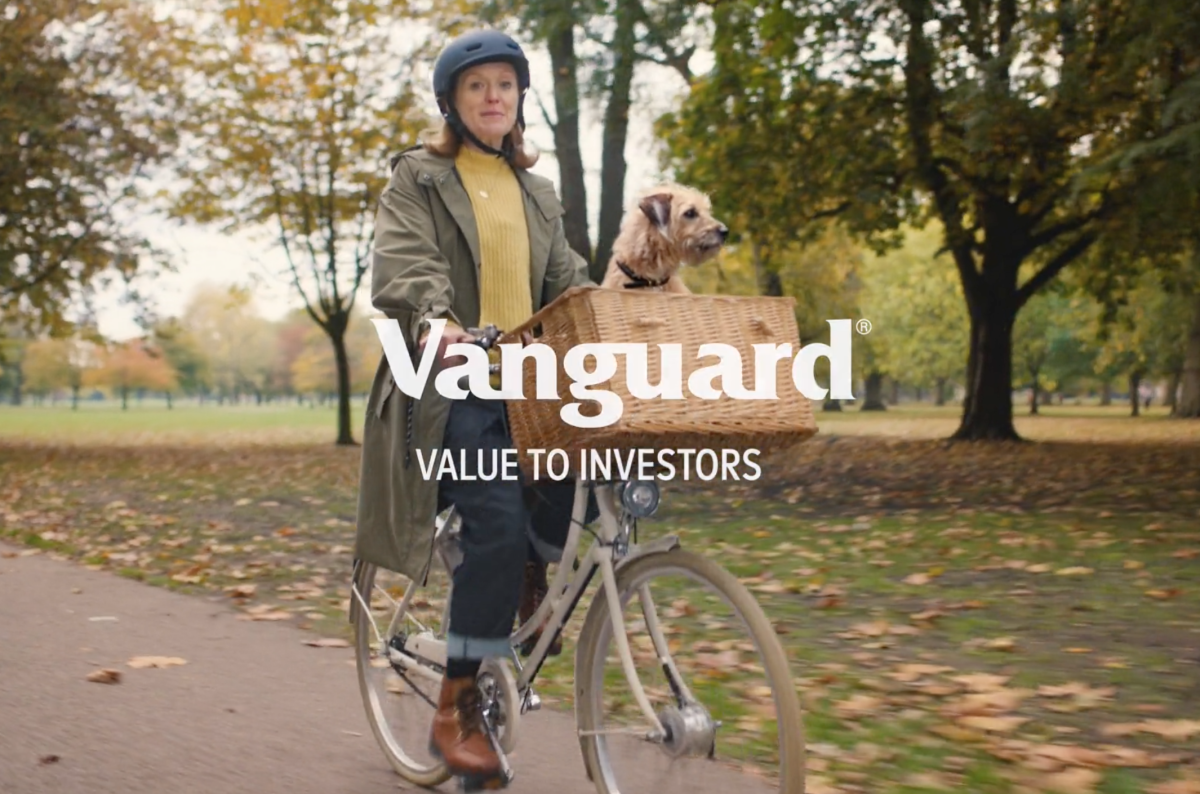 Arguably the most reliable predictor of future fund performance is cost: the less you pay, the higher your net returns are likely to be. The fact that most active funds underperform comparable index funds is largely down to the extra fees and charges entailed. But there are some fund managers which charge less for active management than others; Vanguard is a prime example. As a result, many of its active funds have performed relatively well. So are you better using an active fund from Vanguard or the equivalent index fund? Morningstar’s JOHN REKENTHALER assesses the evidence of the last 30 years.

This is the third and final instalment of a series on Vanguard’s two style-based passive mutual funds, Vanguard Growth Index VIGRX and Vanguard Value Index VIVAX, which were innovations when they were launched in 1992. For the first time, investors could buy half of the S&P 500 index. Growth Index held the benchmark’s more glamorous but pricier companies, while Value Index contented itself with its potential bargains.

The first article inquired if Vanguard’s customers have used those funds wisely or if they have attempted to time the stock market by buying the fund with the highest recent return. Happily, the answer is the former.

To both shareholders’ credit and Vanguard’s — through their marketing, organisations can influence how their investments are used — cash flows into each fund have been steady. Aside from one early stretch, their shareholders have not chased performance.

The second article evaluated rebalancing. In theory, investors who own two securities with similar long-term returns — as has been the case with the Growth and Value Index funds — should benefit from periodically resetting their portfolio to its original allocation. That principle indeed has held for the Growth and Value indexes, with a five-year rebalancing schedule supplying the highest profits.

This article addresses the investment alternatives. In 1992, Vanguard already managed two actively run large-growth funds and three large-value funds. Vanguard shareholders who wished to divide their monies between blue-chip growth and value stocks therefore had a choice. They could have used either the existing active funds or the newly created Growth and Value Index funds.

You surely can guess what happened. Over the ensuring three decades (almost), the Growth and Value Index funds have enjoyed healthy net inflows, summing to $115 billion over the years. Meanwhile, three of the five actively managed funds have suffered net redemptions. Passive in, active out.

The funds’ total returns, though, have been less predictable than their sales results. As the following table indicates, Vanguard’s active large-company funds have performed much like its index funds. (In addition to the growth- and value-style funds, the table also shows how the company’s active large-blend funds have fared.) From this admittedly small sample size, there is no evidence of index-fund superiority. 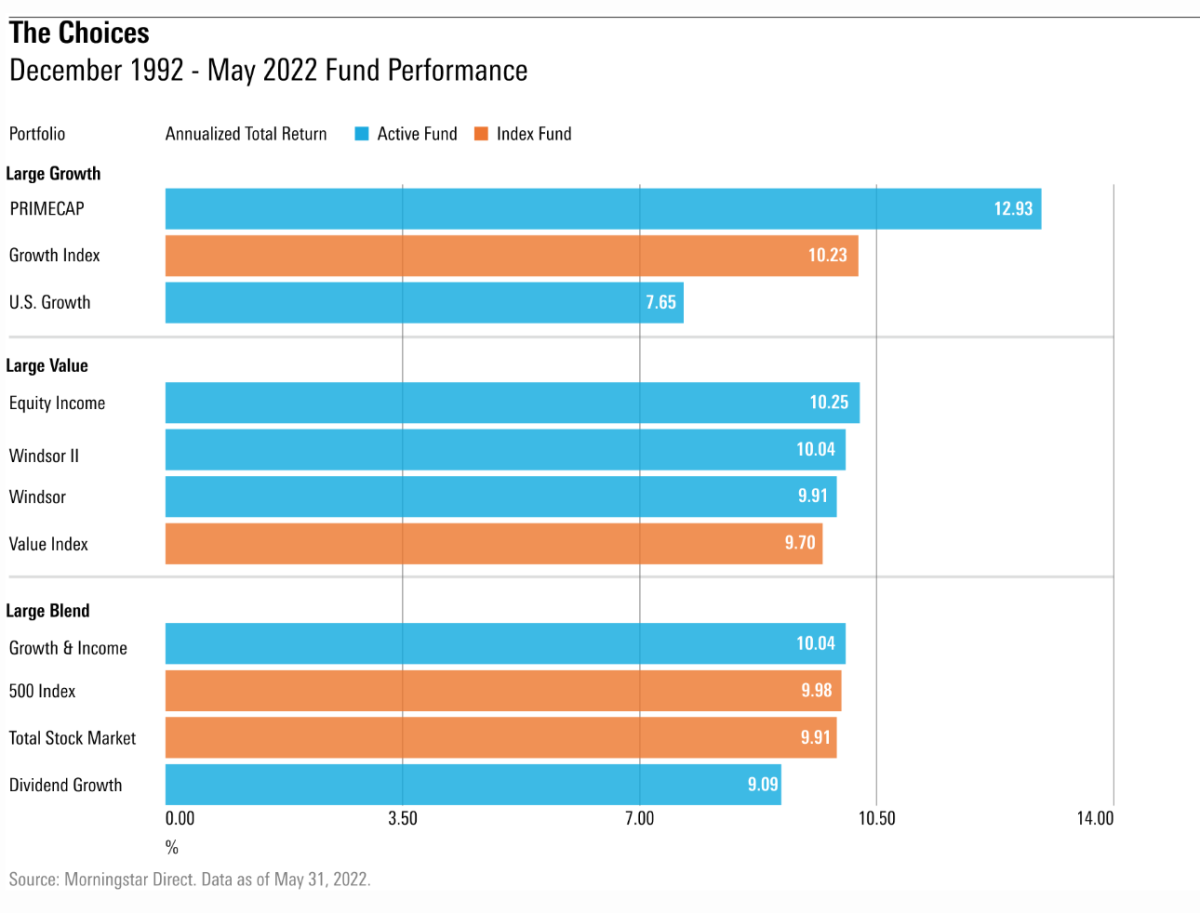 By themselves, these results do not invalidate the sales trends. Index funds have not become popular solely because of their returns. To justify attention from would-be indexers, Vanguard’s active funds must satisfy two additional criteria.

First, are they consistently managed? If not, they cannot adequately substitute for funds that invariably deliver what the tin promises. Second, could investors have identified the winning active funds in advance? Hindsight yields no profits.

The first objection poses no hardship. Vanguard’s active funds are among the industry’s most reliable. Year after year, they follow the same investment strategies. Along with keeping fund costs low, Jack Bogle’s fundamental management principle was to avoid surprising shareholders. Consequently, he structured Vanguard’s funds with rigorous mandates. That tradition continues to this day. (I recently wondered if Vanguard had “lost its way” — but that concern does not extend to how the company oversees its mutual funds.)

However, the second argument is trickier. Aside from expenses, which can be set aside because all Vanguard offerings are relatively cheap, and from organisational issues, which are immaterial since Vanguard sponsors each fund under consideration, there are three simple methods for choosing funds within an investment category: returns, risk-adjusted returns, and asset size.

That is, one could select those investments with the highest returns, or the best risk-adjusted returns (which is how the Morningstar Rating, or “star rating,” operates). Or, deciding that past performance provides no clue whatsoever for future results, investors could have bought instead the biggest funds, believing that those funds became popular for good reason. (For the most part, that is a sound premise.)

I tested all three approaches by creating two-fund portfolios that invested half their monies in one of Vanguard’s actively managed large-growth funds and the other half in a large-value fund.

The first portfolio held the funds with highest trailing returns for their categories as of December 1992, while the second bought the funds with the highest Sharpe ratios. The third owned each category’s largest funds. The subsequent returns for each portfolio, along with the performance of the equivalent index-fund portfolio, appear below. 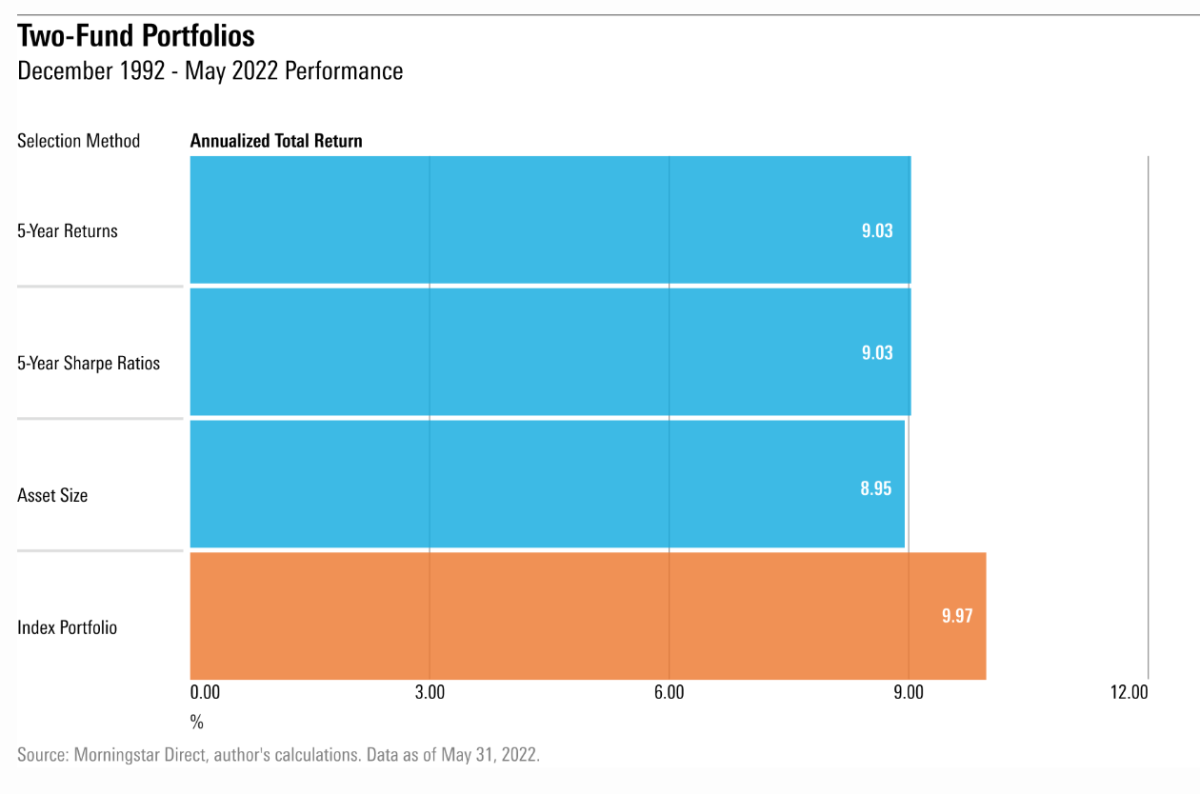 A disappointing outcome for active managers. The problem lies not with the active large-value funds. Rather, the three active fund portfolios would each have held Vanguard US Growth VWUSX instead of the vastly superior Vanguard Primecap VPMCX. By all common measures, Vanguard U.S. Growth seemed the better fund in 1992. It had trounced Vanguard Primecap during 1989′s bull market, through 1990′s downturn, and again when the bull market resumed in 1991. It boasted three times its sibling’s assets. Yet over the next 29½ years, it trailed its sibling badly.

No doubt, there were clues for the savvy. Morningstar was almost 20 years away from awarding its Morningstar Analyst Ratings. Had the company produced those reports in 1992, perhaps its analysts would have spotted both Primecap’s potential and US Growth’s weaknesses. (Then again, since I led the mutual fund research team in 1992, probably not.) That would, however, have been a difficult assignment.

Readers sometimes accuse me of disparaging active funds. That is not strictly correct. If actively-run funds are accompanied by low expense ratios, as with Vanguard’s offerings, their expected returns are fully competitive with those of index funds. Many investment commentators claim that the reason to own index funds is for their superior performance. I do not.

However, I do worry about being able to identify successful active funds before the event. In 1992, I understood the differences between US Growth’s and Primecap’s investment approaches. In addition, if presented with a specific stock market scenario, I likely could have predicted which fund would perform better. But that’s a far different and easier task than recognising which scenario will actually occur.

The percentage of outperforming funds fell again in 2021

What should investors look for in an index?