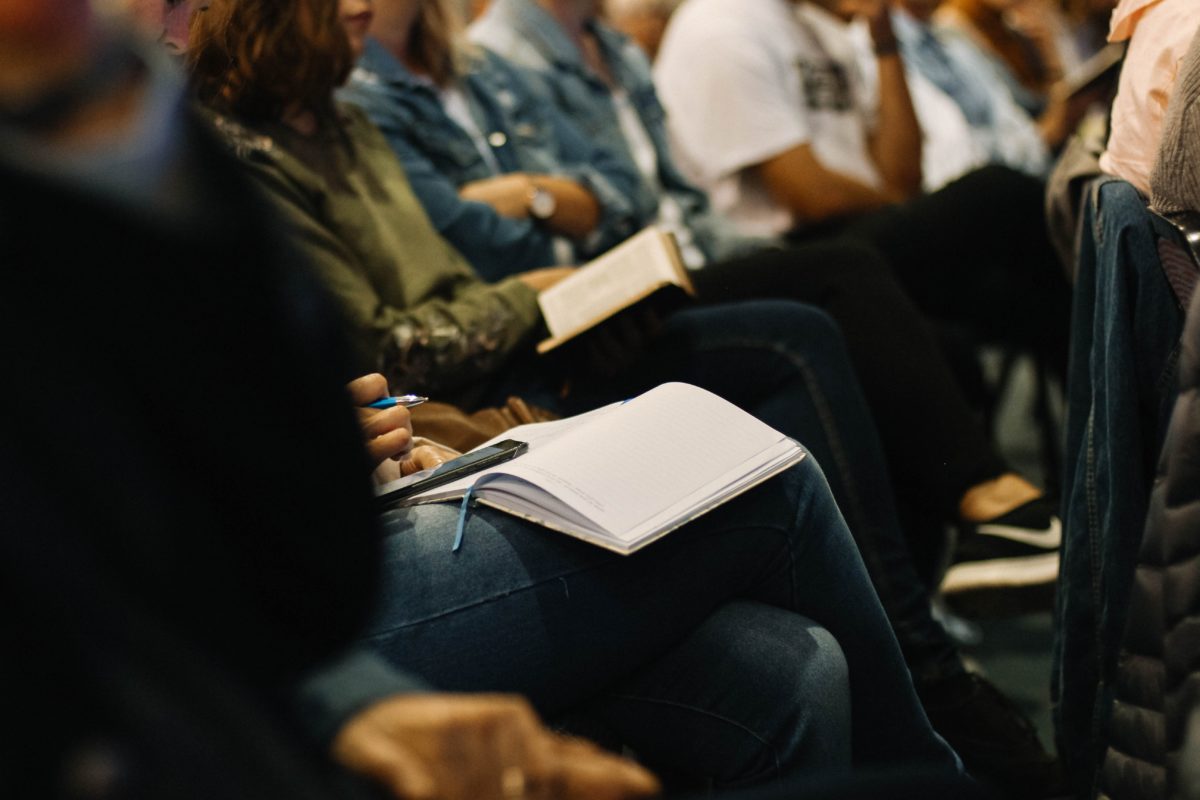 “What did people invest in before passive funds came along? The answer in many cases is simply: “closet tracker funds”… So passive funds are not displacing fund managers who spent all their time haranguing corporate managements to do a better job. They’re really just displacing overpaid versions of themselves.”

“Big passive providers such as Vanguard and BlackRock are already very aware of this corporate governance issue… This is good news for the markets as a whole.”

It may surprise you to hear that I’m a bit cynical about ESG – that is, environmental, social and corporate governance-focused investing.

(When I were a lad, it was called ethical investing, but that’s not confusing enough for the finance industry.)

But that said, there are some bits that I’m more keen on.

The growing tendency of big passive funds to at least pretend to care about corporate governance is one of them.

Why objections to passive investing and governance are flawed

We all know by now that passive investing is booming.

Passive funds don’t try to do anything clever. They just track a market, rather than aim to beat it. However, they end up being better than most active funds because they charge less, and because most active funds can’t beat the market either.

To be clear, I have nothing against active management. I believe that there is room in most investors’ portfolios for genuinely active management (which I’d access via investment trusts). Heck, some of my closest friends are active fund managers.

But if you don’t have the knowledge, advice or inclination to hunt for decent active managers (who do exist), then defaulting to passive makes a lot of sense.

Obviously, the fund management industry doesn’t like having its lunch pulled out from under its nose in such a brutal fashion. However, it can’t really argue with the fact that passive tends to beat active – which is, of course, the core attraction of passive.

So the critiques of passive tend to be more philosophical, such as: “How many active managers does it take to maintain the market’s price discovery mechanism?” (If you can think of a good punchline to this question, send it to me via Twitter.)

One such complaint about passive is about corporate governance. You see, as passive funds have grown ever larger, they’ve also ended up owning ever-increasing chunks of companies. This has a number of implications, but we’ll focus on just one today – stewardship.

The people who own companies are meant to at least keep an eye on what the people who manage companies are doing. I mean, if you invest your money in a firm, you want to make sure that it sticks to the game plan and that it’s responding to future threats and all the rest of it.

If you have lots of companies that are effectively owned by algorithms, then who’s keeping an eye on the management teams?

This looks like a reasonable point. But there are two big objections to it.

The first is this: what you need to remember is, what did people invest in before passive funds came along? The answer in many cases is simply: “closet tracker funds”.

A closet tracker fund is a fund that tries to hug its benchmark – ie, track the market. A fund manager knows they’ll get fired if they massively underperform the market for too long. But they won’t get fired for broadly being in line with the market.

This understanding – also known as “career risk” – incentivises them to play it safe. Unfortunately, that also prevents them from taking the bold decisions necessary to beat the market.

As a result, closet trackers don’t do much that’s different to passive funds in reality. A FTSE 100 closet tracker might own a bit more BP and a bit less HSBC than passive funds. But the aim is basically the same – don’t diverge from the index. And don’t kick up trouble.

So passive funds are not displacing fund managers who spent all their time haranguing corporate managements to do a better job. They’re really just displacing overpaid versions of themselves. 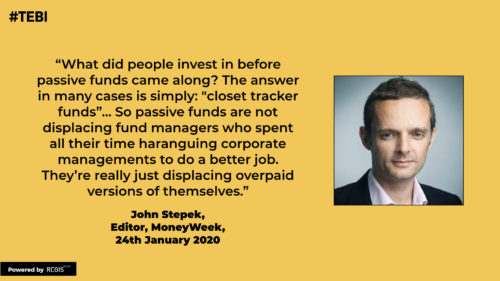 The second objection is that big passive providers such as Vanguard and BlackRock are already very aware of this corporate governance issue. They are also aware that, with fees pretty much as low as they can go, they need to find other sources of differentiation.

In a world where “issues” are never far from the headlines, a focus on taking active stances and acting as the shareholders’ champion is definitely one way to differentiate yourself from the competition.

BlackRock boss Larry Fink realised this a long time ago. Every year he sends a letter to chief executives shouting at them about the latest trend and how he’s going to make sure that BlackRock invests accordingly. This year, for example, he said that the company plans to drop thermal coal producers from its actively-managed funds, and creating ESG versions of its passive funds.

My point here is not to bang the drum for any particular cause. Honestly, I’d rather see Fink start talking about rewards for failure and clarity on CEO pay packets. But what I am pleased about is that stewardship is becoming an obvious battle ground for financial services companies to compete on.

And this is good news for the markets as a whole. One thing we often complain about is the distance between end investors and the managers of corporations. Shareholder capitalism has been undermined by intermediaries waving through grossly disproportionate rewards for chief executives, and failing to hold managements to account sufficiently.

If passive funds are realising that kicking up a fuss about bad management behaviour is a way to gain competitive advantage, then that puts pressure both on company managements to behave better, and on active funds to go even further, and to prove that they can be better stewards of capital than passive funds.

And that should be good news for all of us as investors. 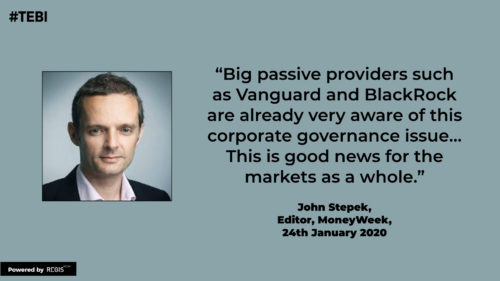 JOHN STEPEK is the Executive Editor of MoneyWeek, and he edits MoneyWeek’s daily investment email email, Money Morning. He is also the author of a new book called Sceptical Investor, which you may recall our colleague Larry Swedroe referred to in his recent article on resulting. John’s article is republished here with his kind permission.

How do you know if you can trust your adviser?

It’s very important that you have absolute trust in your financial adviser. But how do you go...

My last job in mainstream journalism was in 24-hour TV news. When a big story broke, we...

Why you shouldn’t join the endowment club

By PRESTON McSWAIN   A message like the following is being delivered over and over to individual...