Active managers would deliver far greater value to investors and to the wider economy if they were, well, rather less active.

I don’t mean passive; the only way an active manager can do what we actually pay them to do, i.e. beat the market after costs, is to break away from the market consensus and show genuine conviction.

No, what I actually mean is we need them to be more inactive. That’s right. Do less. Take more holidays, play sudoku, stare out of the window, talk about the weather or Arsenal’s indifferent start to the season.

The evidence is categorical: the less funds trade, the better they perform. It’s not so much that they’re bad at picking stocks and market timing, though the data shows they generally are. It’s mostly down to costs. Quite simply, buying and selling incur fees and charges that erode their net returns.

As TEBI readers know, there are very, very few managers who actually add value over any meaningful period of time, and the one thing that almost all of them have in common is that they rarely trade. They buy and hold.

Take Neil Woodford, for instance. He’s having a bit of a mare just now but, in the past, it’s his long-term approach that’s delivered the goods. Nick Train is another manager who understands the value of doing less. His recent Manchester United purchase, as far as I can make out, is his only major trade in two years.

An “active” fund in the US, the Voya Corporate Leaders Trust Fund, hasn’t bought a single stock for more than 80 years and has outperformed all but around 2% of its competitors. 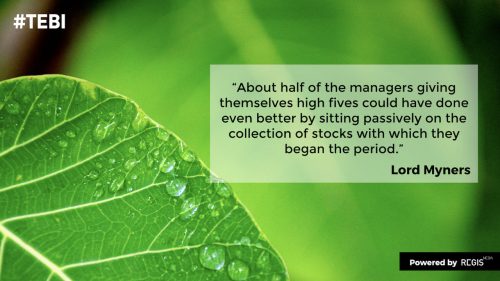 In an article in the FT two years ago, Lord Myners recalled his time as head of a big City fund house, where he challenged his colleagues to trade less frequently.

“This measure, which I called the inertia index,” Lord Myners wrote, “revealed thatMeanwhile, half of those at the bottom of the performance pile had contributed to their own injuries, and could have done better if they had stayed away from the telephone.”

Why, then, are our money managers quite so hyperactive? Why do they see the need to turn over their entire portfolio, on average, every 1.7 years? Why don’t they truly invest in companies, and really get involved in corporate governance, rather than just buy and sell stocks?

One of the biggest problems, of course, is that they’re paid a fortune. It wouldn’t look good if they whiled away their hours dunking custard creams into endless cups of tea. They need to be seen to be doing something.

Another issue is that pay structures incentivise managers to focus on relative rather than absolute value. They have to keep trading, keep throwing the dice, to earn their annual bonus; for some struggling managers, it’s the only chance they have of staying in a hugely well-paid job.

Personally, I would love to see a new generation of active funds that don’t employ full-time managers at all — that simply hire a consultant once a year, or even every five years, to review the portfolio and, only if it’s deemed strictly necessary, to reposition it slightly.

In the meantime. I agree with Lord Myners. The FCA should introduce an industry-wide inertia index, so everyone can see who the genuine long-term investors, and the obsessive pack-shufflers, are.

This game of hot potato endangers all our futures