Our five-part explanation of the basics of investing is almost complete. Last time we looked at how to choose an investment strategy. But there’s one final, and very important, issue to explore — you, and maintaining your discipline.

Once you have built a diversified portfolio around your goals, risk appetite and circumstances, the most important contribution you can make beyond regular saving is just keeping your nerve in the face of volatility.

The fact is that it is in the nature of markets to go up and down. But we know that over time, there is a return on capital. If there weren’t, no-one would invest in the first place. So, just sticking with the program can make a big difference to your outcome.

There is significant evidence that people’s biggest obstacle to reaching their long-term investment goals is usually not so much the market itself, but their own errant behaviour.

Some of the most common errors include failing to sufficiently diversify (taking bets on individual stocks or sectors), underestimating the effect of costs in trading, trying to time the market and, most of all, acting on daily market headlines.

It’s natural for investors to feel anxious when markets are volatile and when the future seems particularly uncertain. We can feel that the safest thing at these times is to get out of the market altogether and wait till the “coast is clear”. Alternatively, when markets are going up and up, we may feel the urge to pile in and take even more risk. Either way, this rarely works.

In fact, there is an entire field of study called behavioural finance, which looks at the phenomenon of investor panics and herding. Psychologists have identified a host of inherent mental “biases” in which our rational mental processes are short-circuited.

These biases are instinctive and often primeval automated responses buried deep in our brains. Think of the flight-or-fight response. But what served us well when we were being chased around by sabre-toothed tigers does not work so well with investment. Behavioural finance has been described as the study of the influence of psychology on, firstly, the behaviour of market participants and, secondly, the effect of that on markets themselves.

On the first point, there is much agreement among academics. People are often their own worst enemies and can make decisions with their money that fly in the face of reason.

On the second point – what this means for markets – there is more of a debate. On the one side, there is a school of thought that markets are efficient and that prices incorporate all known information. On the other, is a view that markets can be as irrational as individuals.

Of course, the detail is more nuanced than that. But both sides agree that rational or irrational, markets are still hard to beat. In the words of the great British economist John Maynard Keynes, “markets can stay irrational longer than you can stay solvent”.

For everyday investors, however, it doesn’t really matter who is right. Markets can only know what is in front of them. When there is a great deal of uncertainty, volatility tends to increase. Is this irrational? Or just a reflection of a wider range of potential outcomes?

In the meantime, you can deal with volatility by examining some of the common biases or shortcuts identified by behavioural finance. These include:

Hindsight Bias: This is the tendency to be wise after the fact. Think of all the experts who said they foresaw the global financial crisis. If that was the case, ask them whether they were selling their stocks beforehand!

Confidence Bias: Just as many people think they are better drivers than they are, many investors think they are smarter than average. This is related to self-serving bias, where people tend to attribute their successes to their own skill and their failures to the system.

Loss Aversion: This is where we put a greater weight on the possibility of a loss than we do on a gain. An example is someone who worries more about the risk of losing money in the market than of not having enough to retire on.

Narrative Fallacy: Humans like stories. We are tempted to force random events into tidy narratives and mistake correlation for causation. ‘The market fell today because…’. Who knows why it fell? It often relates more to prior expectations than any one thing.

Recency Bias: This is where we are overly influenced by recent events and extrapolate them into the future. You see it when investors act on whatever has been dominating the media. By the time they sell, the markets are worrying about something else.

Many of these mistakes stem from a lack of appreciation among investors of how competitive financial markets are and how quickly information is built into prices. This leads to a tendency to try to outguess the market and profit from perceived errors in prices.

Now, of course, markets aren’t perfect and not every price is “right”. But that doesn’t mean you can profit consistently from how they are wrong. Of course, everyone has a right to opinion about what the value for a stock should be, but all those opinions are already reflected in its price. As investors we can either bet against the market or work with it. The former approach can be a costly, hit and miss affair. You’ll win some of the time but lose most of the time.

A better approach is to work on the assumption that prices are fair. Not perfect, but fair. Then you can focus on what you can control, which is building a portfolio around risks that are related to a long-term return, diversifying across and within asset classes, watching costs and taxes, and rebalancing as markets change and as your needs evolve. That may not be a particularly exciting approach, but it is the right one for most people.

At this point, Warren Buffett’s name usually comes up – the argument being that his record in picking stocks shows that it can be done. But Buffett is a businessman. He buys businesses, transforms them and sells them. In any case, his advice is most people are better off in an index fund. In 2017, Buffett collected on a $1 million bet he made a decade earlier that an index fund would outperform a collection of hedge funds over 10 years. He gave the winnings to a charity.

So, the rules around investing are counter-intuitive. Whereas in other areas of life, constant activity and hard work are the keys to success, investing is about getting your portfolio right at the beginning, keeping trading (and cost) to a minimum, and exercising discipline.

By the way, this is not a set-and-forget approach. You still review your portfolio regularly; you can still rebalance. But you’re doing so deliberatively, in the context of your needs and circumstances, not as a knee-jerk response to whatever is happening in the markets.

The science around behavioural psychology is a rich and fascinating one, extending back to the late 19th century and a study by a French scholar, Gustave Le Bon, called ‘The Crowd: A Study of the Popular Mind’.

But the landmark research and one that formed the basis for behavioural economics, came in the late 1970s from two Israeli psychologists Daniel Kahneman and Amos Tversky.

Their work, which earned Kahneman a Nobel Prize in 2002 (Tversky had died several years before), revolves around a concept they called ‘Prospect Theory’. This focused on how we manage risk and uncertainty, showing that people often make decisions based on emotion and routinely misjudge the probability of certain outcomes.

For a layperson’s guide to their work, see the celebrated writer Michael Lewis’ book ‘The Undoing Project: A Friendship that Changed Our Minds’. Kahneman himself also popularised his life’s work in recent years in the best-selling ‘Thinking, Fast and Slow’.

Heavily influenced by Kahneman is Professor Richard Thaler, a professor at the Booth School of Business at the University of Chicago, who wrote a magisterial overview of the many ways we fool ourselves – ‘Misbehaving: The Making of Behavioural Economics’.

Another influential voice in behavioural finance is Professor Robert Shiller of Yale University, who wrote the book ‘Irrational Exuberance’ in 2000 (and updated it in 2015 after the crisis).

Interestingly, Shiller in 2013 shared the Nobel Prize in economics with Professor Eugene Fama, who as the architect of the efficient markets hypothesis, is often characterised as sitting on the complete opposite side of the table to the behaviouralists.

In reality, Fama and Shiller agree on a lot of things, including that there is variation in stock returns and that there is some predictability around that. Where they disagree is whether this variability is rational or irrational.

But whoever is right, that doesn’t really change the calculus for most investors. Markets are hard to beat, there are no free lunches beyond diversification, and you are better offer starting with the assumption that prices are fair and staying disciplined. 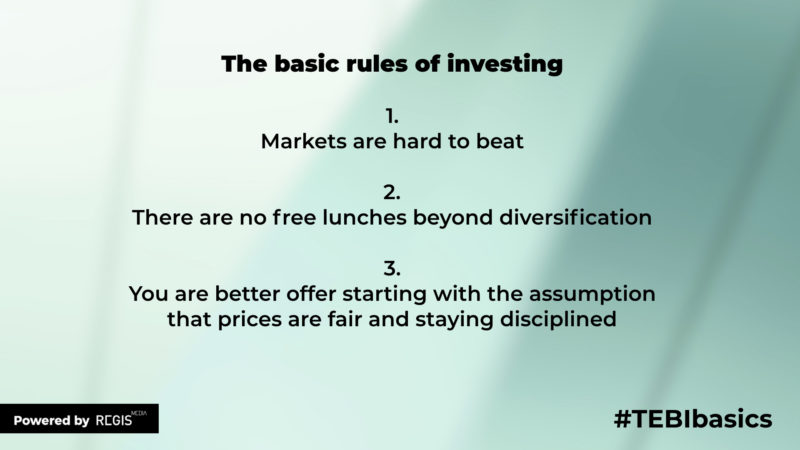 Looking for a financial planner with an evidence-based investment philosophy? We may be able to help you. Click here for more details.

This content, and indeed all of the content you will find on The Evidence-Based Investor, is for informational, entertainment or educational purposes only and should not be construed as investment advice. While the information provided is believed to be accurate, it may include errors or inaccuracies.