Money and happiness. OK, this one’s is a little more philosophical than most TEBI posts, but please bear with me.

We all need to invest, but investing without a plan is a bad idea. And you can’t come up with a plan until you know what you want from life. In short, you need to understand yourself and what makes you happy.

Chris Budd is an expert on the relationship between money and personal happiness. He’s the author of The Financial Wellbeing Book and producer of a regular podcast on the same subject. I recently visited him at his home near Bristol and spent a fascinating hour or so, listening to his philosophy.

In this interview, Chris discusses the importance of self-awareness and the value of having a third party, such as a financial planner, to help you work out your priorities. He also outlines some of the academic research on the part that money plays in our sense of well-being.

In your book, you emphasise the importance of self-awareness. Why is self-awareness so critical from a financial planning point of view?

The key to financial well-being is “know thyself”. Financial planning is very simple — work out what you want from life and spend your money on that.

But of course, working out what you want from life isn’t that easy. The best way to do it, I would argue, is to use a third party. You can’t really challenge your own assumptions. We go through life with lots of self-limiting beliefs, with lots of things we assume to be true, but we need a third party to challenge us.

Give me an example of a common false assumption.

Let’s say there’s a 55-year-old who says they want to retire at 65 and they want a financial plan. The first question a financial planner should ask them is, how did you come across the age of 65? Why did you choose that? Quite often people haven’t really thought about why. They just think that’s the age when they’re supposed to retire. Actually, for some people, the right age may be 75; for other people it might be earlier. Another question to ask is, on the day after retirement, what do you want to do? What will life look like?

For a financial planner, helping clients to spend time thinking about that sort of stuff is the very important first stage before you start talking about investing at all. 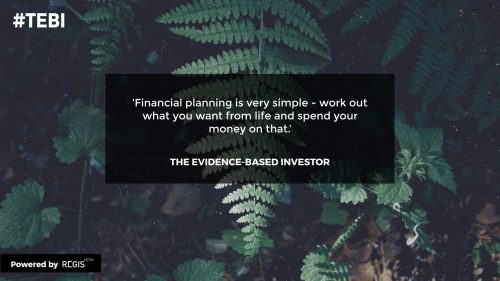 It’s one of life’s big questions, but what’s your view on the link between money and happiness? Does many make us happy?

Money is important. But it’s an enabler. It makes us happy by enabling us to do things. It’s a tool. If we work out what will make us happy, we can direct our money in the right ways.

I’m not one of these people who says that money doesn’t buy you happiness. It does. If you’re somebody who doesn’t have a great deal of money, and you get a bonus from work that enables you to go on holiday, that’s going to make you happy. Of course it is. But there’s a level at which more money won’t make you any more happy. If you give Bill Gates a tenner, he’s not going to notice.

There are loads of studies about money and happiness. In one study, they asked a bunch of lottery winners and a bunch of people who had suffered a very serious and life-changing accident, were they happy before the incident and were they happy after the incident? Actually, whoever said they were happy before, in either group, were also happy afterwards. In other words, the event made no difference.

So the amount of money we have can help. But actually, knowing yourself, working out what you want from life and spending your money on that is a much better way of increasing long-term well-being than seeking short-term happiness.

So, if money isn’t the most important contributor to people’s happiness, what is?

Well, my favourite study on this is a Harvard study. They asked 900 or so young people what would make them happy in the future. They all said two things — money and fame. That’s what they predicted would make them happy. That was 75 years ago and they’ve been going back to this group every two years. Overwhelmingly the answer the group has come up with for what makes us happy is the quality of our social relationships — not the quantity, the quality — even to the extent that they’ve seen that lonely people die earlier. That proves the point that financial well-being is just part of our overall well-being. 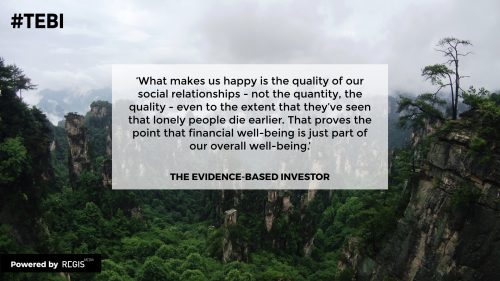 From a personal well-being perspective, is it better to spend money on physcial possessions or on experiences?

We sometimes call buying things to make us happy retail therapy. You’re feeling a bit fed up so you go out and spend some money on something to cheer you up. And it does. It works. I think everyone will have experienced that. But the happiness you get from buying something is short-lived. Whatever it is that you bought, once you’ve read it, looked at it, eaten it, or whatever it might be, the well-being tails off.

If you spend that money on an experience, then that creates memories, and well-being from memories is much longer lasting. There’s nothing wrong with buying stuff. I buy guitars and it makes me happy because it enables to play in a band. But experiences have been shown to give much longer lasting well-being.

What evidence is there on the link between happiness and giving money away?

But although philanthropy is a good source of well-being, there are some important rules to follow. We did a podcast on this and we talked to charities like Oxfam. Charities do things like trying to tell you where your money is going, so you can see the end result. That gives you more well-being from your giving.

It’s also important to give your money on the basis of joy rather than reaction. It might feel like a good thing to do to give money to someone on the street who’s homeless. But if you give to a homelessness charity, you’re giving through a feeling of joy rather than a feeling of guilt. It’s also important to give to a cause that you have personal experience of. An example would be people who run the London Marathon for a cancer charity because one of their friends has died of cancer. Finally, it’s good if your giving that is planned and organised.

The Evidence-Based Investor is produced by Regis Media, a boutique provider of high-quality content and social media management for evidence-based advice firms. For more information about what we do, visit our website or YouTube channel or email Sam Willet or Christina Waider.