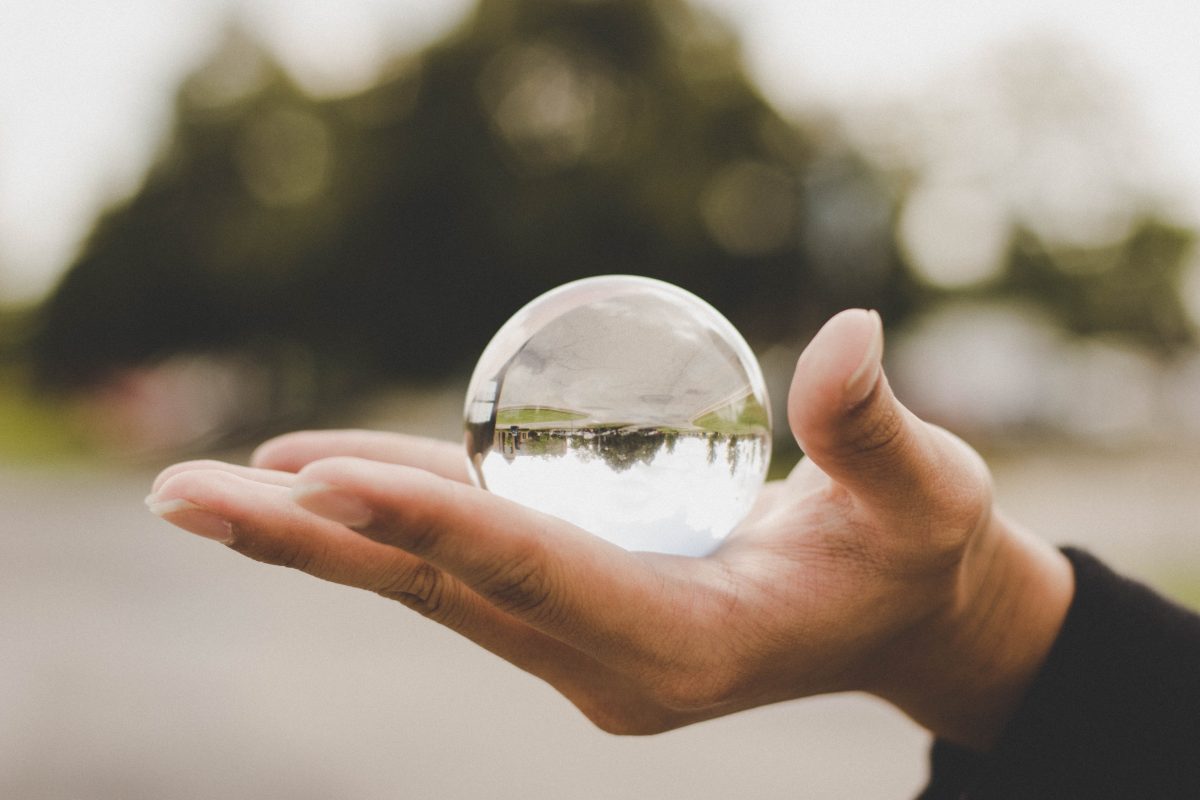 I’ve noticed a tendency in the financial media to talk about the failure of active funds to outperform the market net of costs as if it’s something we’ve only recently discovered. In fact, for those who were prepared to look for it, the evidence behind evidence-based investing has been around for a very long time.

You could argue that it was the French mathematician Louis Bachelier who started it. In his 1900 PHD thesis, The Theory of Speculation, Bachelier demonstrated that security prices move in such a random fashion that “the mathematical expectation of a speculator is zero”.

It was, however, an American named Alfred Cowles III who was the first person to measure the performance of stock market forecasters empirically. 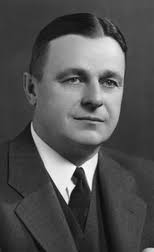 Born in Chicago and 1891 and educated at Yale, Cowles became a successful businessman. But his true passions were economics and statistics. One question in particular exercised his mind — is it possible to beat the stock market? — and in 1927 he set out to find the answer.

Over a period of four-and-a-half years, Cowles collected information on the equity investments made by the big financial institutions of the day as well as on the recommendations of market forecasters in the media. There were no index funds at the time, but he compared the performance of both the professionals and the forecasters with the returns delivered by the Dow Jones Industrial Average.

His findings were published in 1933 in the journal Econometrica, in a paper entitled Can Stock Market Forecasters Forecast? The financial institutions, he found, produced returns that were 1.20% a year worse than the DJIA; the media forecasters trailed the index by a massive 4% a year.

“A review of these tests,” he concluded, “indicates that the most successful records are little, if any, better than what might be expected to result from pure chance.” 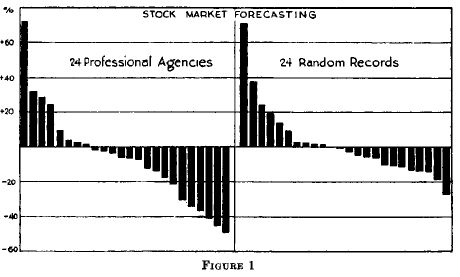 A hand drawn chart by Alfred Cowles from his paper Can Stock Market Forecasters Forecast?, published in the journal Econometrica in July 1933

11 years later, in 1944, Cowles published a larger study, based on nearly 7,000 market forecasts over a period of more than 15 years. In it he concluded once again that there was no evidence to support the ability of professional forecasters to predict future market movements.

What is so extraordinary about Alfred Cowles’ work, and the techniques he used, is how ahead of his time he was. Even among students of academic finance, the common perception is that it wasn’t until the mid-1970s that the value of active money management was seriously called into question, most famously by Paul Samuelson and Charles Ellis. In fact it was Cowles, more than 30 years previously, who first provided data to show that it was, to use Ellis’ phrase, a loser’s game.

So why wasn’t Cowles’ research more widely known about? Why did it take until 1975 for the first retail index fund to be launched? And why is active management still the dominant mode of investing even now, in 2018?

There are probably many reasons. The power of the industry lobby and the large advertising budgets at the disposal of the major fund houses have undoubtedly played a part, as has the growth of the financial media.

But it was Alfred Cowles himself who put his finger on arguably the biggest factor behind the enduring appeal of active management. Late in life, Cowles was interviewed about his research into market forecasters. In Peter Bernstein’s 1992 book, Capital Ideas: The Improbable Origins of Wall Street, he is quoted as saying this:

“Even if I did my negative surveys every five years, or others continued them when I’m gone, it wouldn’t matter. People are still going to subscribe to these services. They want to believe that somebody really knows. A world in which nobody really knows can be frightening.” 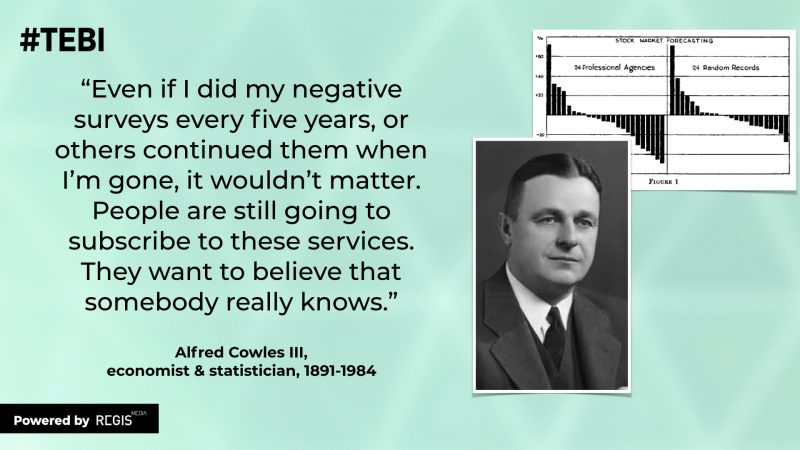 Cowles’ prediction has proved to be spot on. Both active management and market forecasting are far bigger industries now than they were when he died in 1984. Investors, it seems, still want to believe that the market can be beaten, despite all the evidence that no more fund managers succeed in doing it than is consistent with random chance.

#SFTW: Biting the hand that feeds — journalism and fund management

SOMETHING FOR THE WEEKEND Journalism As a journalist who now works mainly in the investing space, I’m fascinated...

#SFTW: Financial journalists — part of the problem, or the solution?

SOMETHING FOR THE WEEKEND Financial Journalists The reputation of British journalism may have taken a knock in recent...

If I had my time again, I would probably study economics at university. It’s a fascinating subject and...