Broadly speaking, evidence-based investors fall into three categories when it comes to the type of funds they prefer to use.

First there are traditional indexers — the Bogleheads, if you like — who love the simplicity of market-cap weighting. Second, there are those who prefer factor-based investing — in other words, tilting their portfolios to risk factors which academics have shown to outperform the broader market over the longer term. Then there’s a third group, to which I belong, who frankly like both and prefer a combination of the two.

I’ll be honest, I’m not a factor wonk. If the bulk of your portfolio is cap-weighted, and the rest of it tilted to size and value, then for me, that’s as complicated as you need to make it. But, if you really do want to squeeze out some more excess return, then yes, there is a case for focusing mainly on factors.

There is, though, a very important caveat. You have to be willing to be very patient and to accept a higher degree of volatility. 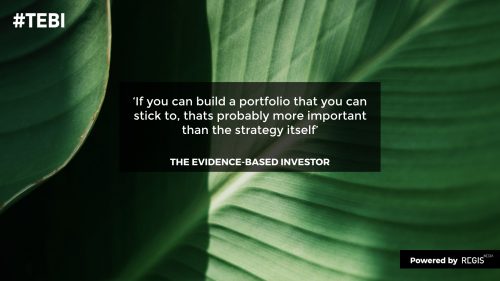 Investment blogger Michael Batnick sums it up perfectly in Part 3 of our new documentary Investing: The Evidence, when he says:

“Any of the smart beta strategies work on their own over a reasonable period of time, but to think that you’re going to beat the market over a one-, two- or three-year period is really misunderstanding what the products do. So if you can build a portfolio that you can stick to, that’s probably more important than the strategy itself, whether you want to equal-weight, tilt to value, or whatever you’re comfortable with.

“But I think one of the issues is that people who had been chasing mutual fund managers might experience similar behaviour with these smart beta products. So I think therein lies the danger.”

You can watch Part 3 here:

There's active investing on the one hand and passive on the other. But there is a third kind, sometimes known as factor investing, which sits somewhere in between

Still not seen Parts 1 and 2 of Investing: The Evidence? Here they are:

Regis Media, which produces The Evidence-Based Investor, has a wide range of videos and articles that can be branded for financial advice firms that share our investment philosophy. You’ll find details and prices on our website and explanatory videos on our YouTube channel.

So far we’ve looked at two types of investing. On the one hand, there’s active investing — actively trying to beat the market through stock selection and market timing. This is known in the industry as trying to generate alpha.

On the other, there’s passive investing — simply capturing the market return, often referred to as beta, at a much lower cost.

But there is a third way — a sort of halfway house — called factor investing. Sometimes referred to as smart, strategic or alternative beta, factor investing is based on the multi-factor model developed by two American academics — the Nobel Laureate Eugene Fama and his colleague Kenneth French.

Financial adviser and author Mark Hebner says: “The multi-factor model took the equity returns of stocks and carved them up into slices — basically looking at the size of the companies, and a value-growth metric. So, by dividing the market into these slices, and looking at the returns of these different slices, academics, and primarily Fama and French, uncovered that there had been higher returns among small companies and among value companies. And when you blended those, you even had a combination of these factors for even higher returns.”

Investment author Larry Swedroe says: “Factors are nothing more than a characteristic, a trait or a style of investing that can be expressed even across asset classes. So you could buy value, which is buying what’s cheap, in stocks, bonds, commodities or even currencies. The problem for investors today is that in the academic literature, over 600 factors have been discovered. So, how is an investor to know which of the 600 are worth investing in?”

In a book called Your Complete Guide to Factor Investing, Larry Swedroe and his co-author Andrew Birkin set out some relevant criteria, and found that just eight factors met them all.

Larry Swedroe says: “The ones that we looked at that pass all of our criteria — and we present the evidence the evidence from the academic literature, citing 106 papers — are market beta, obviously, size, meaning that small-cap stocks outperform over the long term, value, momentum, profitability and quality, something that’s called the carry trade, and last is term premium. And we throw out the rest.”

Seeking exposure to different risk factor is known as tilting your portfolio. So, are factor tilts a good idea? Factor-based funds are slightly more expensive than conventional passive funds, but if you’re willing to be patient, then yes, they can make sense.

What you have to remember is that although they are expected to deliver higher returns, there is a price to pay in the form of greater risk. Many investors are too impatient. They expect outperformance far more quickly than is reasonable.

Investment blogger Michael Batnick says: “Any of the smart beta strategies work on their own over a reasonable period of time, but to think that you’re going to beat the market over a one-, two- or three-year period is really misunderstanding what the products do. So if you can build a portfolio that you can stick to, that’s probably more important than the strategy itself, whether you want to equal-weight, tilt to value, or whatever you’re comfortable with. But I think one of the issues is that people who had been chasing mutual fund managers might experience similar behaviour with these smart beta products. So I think therein lies the danger.”

Some say there’s another danger — that factor investing is becoming too popular. As more and more people tilt to different factors, might the premiums that those factors are expected to deliver disappear?

Ben Johnson from Morningstar says: “So what you could see is a form of observer effect, whereby people crowd into, say, the value factor, through one or multiple funds that set out to exploit that value factor, and by doing so, they squeeze out any excess performance that might have existed in there. Now, ultimately what I think you will see is that behaviour will take hold — people are still people — and that newly minted value investors will get fed up with market-like or sub-par performance, they will go out of that fund, or that factor, as quickly as they entered it, and value will magically reappear.”

So, when deciding how to invest, the most important thing is to avoid high-cost, actively managed funds. The evidence clearly shows that the best approach is a combination of passive and factor investing. By choosing the evidence-based route, you are far more likely to have a successful investment experience.