Investment consultancy is big business. In the UK alone, the institutional advice sector advises pension funds, insurers and charities on how at least £1.6 trillion of assets is invested. It’s also very lucrative, particularly for the “big three” firms — Mercer, Willis Towers Watson and Aon — that dominate the sector.

But how much value do investment consultants actually add?

In March this year, the Competition and Markets Authority announced that its quantitative analysis had found no evidence that investment products rated as ‘Buy’ by investment consultants have outperformed, net of fees. This held for all consultants, and for all significant asset classes.

A new study, Investment Consultants’ Claims About Their Own Performance: What Lies Beneath?, raises further questions as to the wisdom of institutions using consultants at all. The research was conducted by Tim Jenkinson and Howard Jones from the University of Oxford, in conjunction with Jose Vicente Martinez of the University of Connecticut and Gordon Cookson from the UK regulator, the Financial Conduct Authority.

In fact, once fees were factored in, all of the recommended products combined produced returns 0.30% per year lower than a portfolio of all the products available to plan sponsors that weren’t recommended.

Most worryingly of all, when the researchers examined the claims that investment consultants made about their recommendations, they found that they exaggerated their performance by a whopping 2% a year.

The paper concluded that “investment consultants appear, on average, to have no systematic skills in manager selection… (and) tend to overstate their ability to select fund managers.” 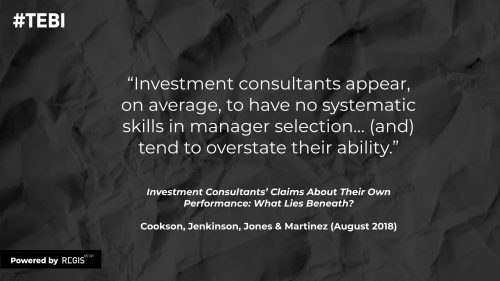 This lack of value provided by investment consultants is certainly not just a UK phenomenon. Several US studies have shown that consultants there also struggle to identify outperforming funds in advance.

For example, a 2008 study by Amit Goyal and Sunil Wahal, The Selection and termination of investment Management Firms by Plan Sponsors, showed that, in most cases, consultants recommend funds that have produced three years of strong returns but which fail to deliver excess returns thereafter.

To add insult to injury, Goyal and Wahal found that the fired beat the hired; in other words, the fund managers whose services plan sponsors dispense with on the advice of consultants then go on to outperform.

First, “those responsible for the selection decisions (i.e. the plan sponsors) sought primarily to minimise the risk of losing their jobs by choosing managers who had been demonstrably successful in the past.”

Secondly, Jones and Martinez found, the consultants had a vested interest in appearing to be active. “The consequence of this activity,” they found, “is a constant churn of hires and fires that, by any easily measurable metric, adds no value, but nonetheless necessitates the continuous establishment of new business relationships.”

For me, studies such as these should make fund trustees extremely wary of the claims made by investment consultants. Increasingly, trustees in the US are being sued by plan members for poor performance and excessive fees. I expect that trend will accelerate, and that trustees elsewhere in the world, including the UK, will start facing legal action as well.

In managing other people’s money, trustees have a huge responsibility. Hiding behind the advice of consultants is simply unacceptable, and ignorance of the academic evidence is no excuse either.

I’m pleased to announce that, in conjunction with the Cheltenham-based financial planning firm RockWealth, I’m going to be addressing all of these issues in two breakfast seminars, entitled Evidence-Based Investing for Trustees.

The first seminar is in Cheltenham on Wednesday 3rd October, and the second in London on Wednesday 17th October. Among the other speakers will be Charles Payne, formerly Investment Director at Fidelity, and the hedge fund manager turned indexing advocate Lars Kroijer.

Trustees of pension and investment funds of all kinds are welcome to come., and attendance is free. However, places at both events are strictly limited, so if you’d like to attend I suggest you email Sarah Horrocks at RockWealth as soon as possible at sarah@rock-wealth.co.uk.

Finally, once again, I’d like to thank Larry Swedroe from Buckingham Asset Management for all his research on this subject, and investing more generally. Anyone interested in evidence-based investing should read Larry’s excellent column for ETF.com.