Imagine you’re at a village fête, and you decide to have a go at guessing the number of jelly beans in a jar. How confident would you be of guessing exactly right or, say within one or two of the actual number? Chances are, it’s a bit of a long shot.

From my limited experience of these sorts of guessing games, the spread of guesses is huge; some come in way under and some way over, and it’s actually very unlikely that anyone’s guesses the precise number correctly.

But, if you add up all the guesses and then divide the total by the number of people taking part, it’s amazing how close the resulting number is to the actual number of jelly beans.

This is a brilliant analogy for the financial markets. We should view the markets rather like a giant super-computer. Every time we buy or sell a stock we express a view as to what a particular security is worth. Some will think a stock is underpriced and buy, and others will think it’s overpriced and sell. Individually, our opinions may be way off mark, but who can possibly argue with the collective wisdom of millions of people, including all the experts? 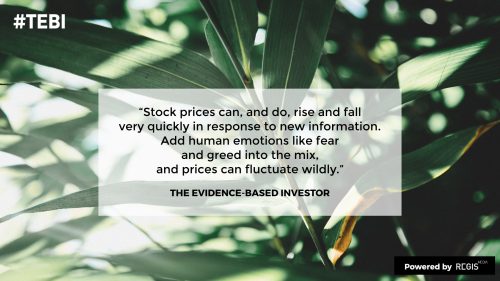 Does that mean, then, that all prices, at all times, are 100% “correct” — a perfect reflection of a stock’s actual value? No, it doesn’t. But prices do reflect all known information, and all new information is absorbed into prices in seconds (indeed, today, in fractions of seconds).

Stock prices can, and do, rise and fall very quickly in response to new information. Add human emotions like fear and greed into the mix, and prices can fluctuate wildly. But that doesn’t detract from the fact that the current price is by far the most reliable indicator as to what a particular stock is worth at any moment in time.

Do you really know something about a specific company which will have a significant impact on its future earnings that millions of others don’t? Do you honestly think you have a better grasp of where the economy’s heading than anyone else? If you do, you possess something truly valuable; but, with respect, the overwhelming likelihood is that you don’t.

There is a name that statisticians give to this phenomenon — the wisdom of crowds. In short it means that when it comes to problem solving, decision making or predicting, people are collectively smarter than individual experts. Sensible investors harness the wisdom of crowds by buying and holding index funds, and all investors would do well to remember it every time they are tempted to trade, or to put their trust in a professional “expert” to trade on their behalf.

The wisdom of crowds phenomenon was first observed in 1907 by the British statistician Francis Galton at a competition at a country fair to guess the wight of an ox. In this, the second in a series of three videos about Galton’s work, I tell the story and, with the help of Mark Hebner from Index Fund Advisors, explain the significance of the wisdom of crowds for investors today.

The wisdom of crowds is the name given to a statistical phenomenon whereby people are collectively smarter than individual experts. It's an important concept for investors to understand.

If you missed the first video in the series, here it is:

Stand by for the third and final video, which focuses on anther important lesson that investors can learn from Francis Galton.

He wrote, among other things, about sociology, psychology, anthropology and meteorology. He was also an explorer and inventor.

But he’s best known as a pioneer in the field of eugenics, a term he himself invented.

So, why is it important to remember the work of someone who died more than a hundred years ago, and who had some pretty reprehensible views on improving the human race.

Subhadra Das, curator of the Galton Laboratory at University College London says: “It’s not useful, really, to think of any historical figure as purely good or bad, but to look at their work and the context of their work, and their influences.”

More than anything else, Galton was a statistician; hence his motto, When you can, count. Arguably it was Galton who invented the notion of big data. One of his most famous experiments demonstrated what’s now commonly known as the wisdom of the crowd.

Subhadra Das says: “There was a guess-the-weight-of-the-prize-steer competition. He took all of the entries for that competition, the little slips of paper that people had written their guesses on. He took them all home, tabulated them, and realised that even though the individual guesses were not accurate, the average of those guesses was only off by something like 20 ounces. So what he propounded was that there is wisdom in crowds, because even though no individual person was able to guess the correct weight, altogether they were very close to what the correct weight was.”

A good example of the wisdom of the crowd in action is the stock market.

Mark Hebner, a financial adviser and investment author, based in California, has had an interest in Francis Galton’s work for many years.

Hebner says: “Investors should think of the market as this huge processing machine, collecting the information and knowledge and forecasts of some ten million traders and some 44 stock exchanges around the world, trading some ten billion shares a day.

“What this does is, it sucks up and embeds all this information into the prices that a willing buyer and a willing seller are willing to trade at. And through this process we end up with the best estimate of the value of all of these securities, both stocks and bonds, all over the world.”

So, the first of two key lessons Francis Galton can teach today’s investor is the wisdom of the crowd.

Yes, markets go up and down, very quickly, in response to new information. But all known information is already baked into prices, and the market is a pretty good judge of how much a particular stock is worth at any given time.

We’ll look at Galton’s second lesson for investors in our third and final video.