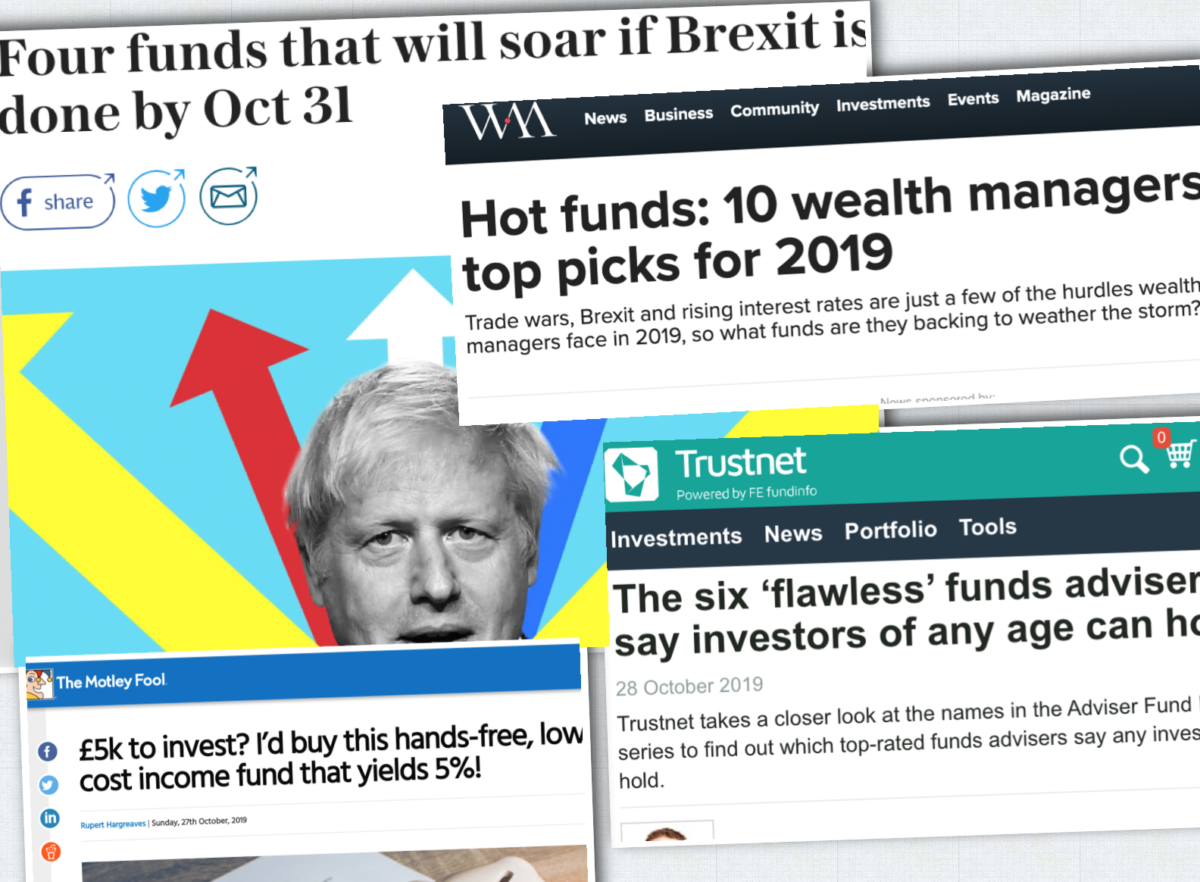 If you have ever acted, like I have, on a fund tip in the media, please take a few minutes to read this article. Believe me, it could save you a fortune.

Funds are promoted in the media all the time. Journalists love them, not least because their readers do. The financial markets are vast and complex. We instinctively want to believe there’s someone who knows what’s going on. Someone who can predict the future and invest our money accordingly.

But there’s a problem. Fund performance is extremely random. Over the long term, only a tiny fraction of fund managers outperform the index on a cost- and risk-adjusted basis. What’s more, says Professor David Blake at Cass Business School, who’s devoted much of his career to analysing fund performance, picking the winners in advance is “impossible”.

Many of Blake’s fellow academics have reached a similar conclusion. To quote the author (and former fund manager) Charles Ellis, “extensive, undeniable data show that identifying in advance any one particular investment manager who will — after costs, taxes, and fees — achieve the holy grail of beating the market is highly improbable.” 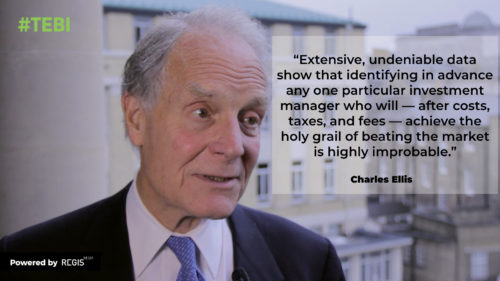 Nor is this anything new. Ellis has been trying to draw attention to the peer-reviewed evidence on fund performance since the mid-1970s.

And yet the charade continues. I must say, I hoped the spectacular demise of “Britain’s Warren Buffett” Neil Woodford might put he brakes on the constant promotion of “star” managers the media. No British stock picker has attracted more publicity than Woodford has.

Sadly, if anything, the touting of funds appears to have intensified. It seems everyone wants to suggest an alternative home for Woodford investors’ money — even before they’ve got what’s left of it back. Unsurprisingly, few publications are suggesting the most logical option, to avoid active managers altogether and invest instead in low-cost index funds.

In the four years since I launched The Evidence-Based Investor, I’ve written many times about the danger of acting on media fund tips. Time and again I’ve seen funds tipped on the back of a year or two of strong performance, and then succumb to mean reversion once the “smart money” has piled in.

The problem is that very few publications bother to monitor the performance of funds they have tipped in the past. If they did, the vast majority would find that far from helping they readers, they have unintentionally misled them, potentially costing them large sums of money.

I’d like to present a case study that demonstrates what I’m talking about. Alan Steel Asset Management is a financial advice firm in West Lothian in Scotland. It manages around £1.3 billion in assets.

ASAM and, in particular, its founder Alan Steel, have been outspoken advocates of active fund management for many years. They have also been dismissive of evidence-based investing and the growing popularity of index funds. Their investment philosophy seems to be summarised in an article in The Scotsman in December 2015, entitled Academics know nothing about investing.

ASAM has been a prolific recommender of funds. You’ll see what I mean if you Google it. But just how useful have those recommendations been?

I could have picked any one of many, but to illustrate my point, I decided to base my analysis on an article, apparently written by Alan Steel himself, which was published in Portfolio Adviser and on the ASAM website in November 2010. In it, Steel writes about what he calls a “fantasy fund management company”, made up of fund managers that he expected to outperform.

As TEBI readers know, nine years is too short a time period to come to a firm conclusion about a particular fund manager. Even still, I was curious to know how each of the funds performed relative to the appropriate benchmark.

I’ve ranked the fund tips included in the article as follows, depending on how well or badly they’ve turned out since: DECENT, DUD and DISASTER. 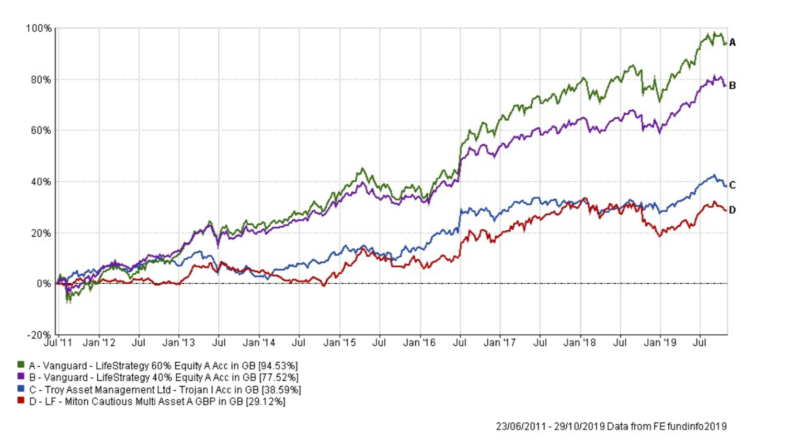 The Investec Cautious Managed fund has been thrashed by Vanguard LifeStrategy 60% and 40% Equity, which have delivered more than double the return of Mundy since they launched, from a comparable asset allocation and with lower volatility. DUD.

The Franklin Templeton Global Bond funds holds primarily Investment Grade Bonds and has been highly volatile. It has underperformed both the Investment Association Global Bond, IA Strategic Bond and IA Sterling Corporate Bond sectors, which have delivered superior returns with about half the volatility.  DUD.

Invesco Perpetual High Income has fared better, but has been still eclipsed by the low-cost Vanguard UK Equity Income fund. In the eight-year period ending 30/09/19, the Vanguard fund has produced a total return of 83%, compared to 65% for the Invesco Perpetual fund. DUD.

M&G Global Dividend, described by ASAM as “our Gareth Bale”, has underperformed both the IA Global Equity Income Sector and the MSCI World Index by a significant margin since September 2010. It has also been one of the more volatile funds in the sector. DUD.

Neil Woodford set up his own investment company in 2015, and ASAM has continued to promote him. Woodford’s performance, however, has been dire and the company is being wound down. It remains to be seen how much of their money his investors will recover. DISASTER.

While Invesco Perpetual Global Smaller Companies has outperformed the UT Global sector average since 2010, it has lagged the MSCI World Index, which has returned 171% relative to 141% from the Invesco fund over the period. DECENT/ DUD.

Neptune Global Alpha has substantially unperformed the MSCI World Index — 141% compared to 171% for the index. Again, the Neptune fund has been very volatile and suffered large drawdowns. DUD. 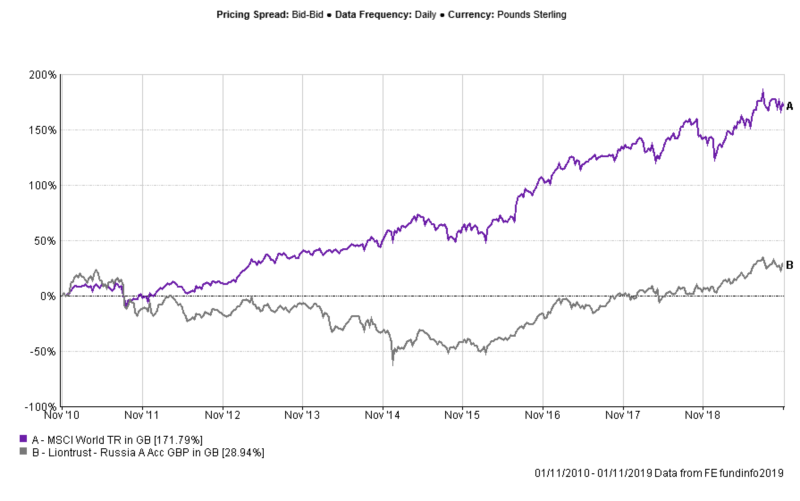 M&G Global Basics has also produced shocking performance. From 2010 (when French was included in the line-up) to 2013 it only grew by only 4.7 per cent — worse than a High Street savings account. Over this 3 year it was among the worst of nearly 300 funds investing in global company shares, while global stock markets rose sharply. Graham French subsequently left M&G, and the fund was merged with another fund, removing its dismal record from the statistics. DISASTER.

First State Global Emerging Markets Leaders is another rare success. Since 2010 the fund has outperformed its benchmark of the MSCI Emerging Markets Index, although it is worth noting that much of that performance was in the early part of the period. Performance has been much less impressive over the last few years. DECENT.

Not much data exists on CF Richmond Core but it was wound up by Capita in 2016. Capita said at the time it was closing the fund “due to its small size and there being no foreseeable growth”. DUD.

Schroders US Mid Cap has underperformed both its IA Sector and the Vanguard US Equity Index by a wide margin. The fund has essentially tracked the sector average, less fees. DUD.

ASAM likened Henderson to Didier Drogba, but JPM Natural Resources has been a complete donkey, falling 40% since November 2010 versus a 171% gain from the MSCI World Index. Over the five years from its inclusion in the ASAM’s dream team, it lost investors more than 70% of their money. DISASTER. 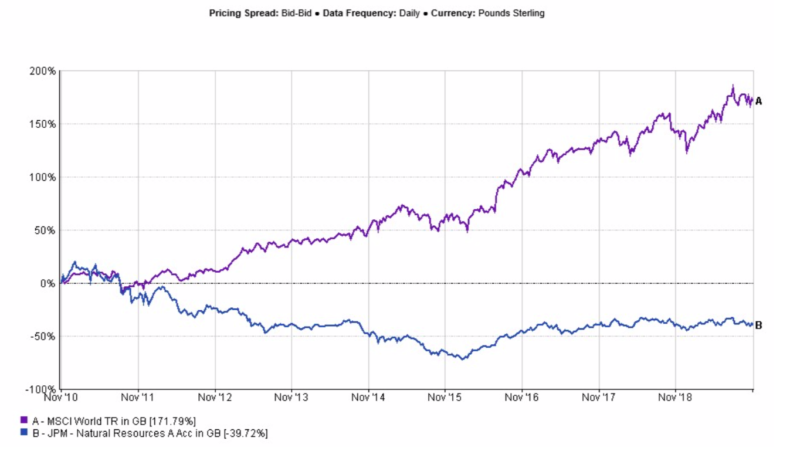 Rathbone Income has proved another creditable pick. It has outperformed the FTSE All Share by 101% to 89% since November 2010. DECENT.

The deep value approach of the M&G Recovery fund has been heavily out of favour since this fund’s inclusion in the team. It has lagged the FTSE All Share by a mile since 2010 and has had some awful periods of performance. By 12/02/2016 it was down almost 10% compared to the FTSE All Share, which was up 27%. DUD.

JPM Global Consumer Trends was merged away to the JPM Global Unconstrained Equity fund in 2015. The merger followed lacklustre performance and a review which identified significant redemptions and limited prospects of attracting new investments into the fund. DUD.

So what are the key takeaways from my research?

First, there are clearly far more DUDs than anything else. Yes, there were a few funds that ASAM tipped in November 2010 that have delivered DECENT performance, as you long as investors stuck with them. But any returns those funds produced over and above the index would have been completely dwarfed by the substantial losses sustained in backing the  DISASTERs — Ian Henderson, Graham French, Robin Geffen and Neil Woodford.

This was no dream team. It looked, on paper, like Barcelona. It performed like Brechin City. If you had followed the recommendations contained in that article instead of investing simple, low-cost, passive portfolio, you would, in relative terms, be nursing substantial losses.

I don’t mean to single out Alan Steel Asset Management for criticism. By all accounts it’s a firm that’s well respected and charges reasonable fees. It clearly has a large number of contented clients. There were many other advisers who repeatedly backed Woodford investment Management, including far bigger advice chains like St James’s Place and Hargreaves Lansdown.

Nor am I trying to suggest that ASAM is any better or worse at identifying outperforming funds in advance than anyone else. There are literally thousands of articles online, tipping various UK fund managers over the last ten years. Pick any one, and whichever tipster you look at — the same names crop up again and again — the vast majority of recommendations have not worked out well. Go on, try it. You’ll see what I mean.

I’m not suggesting either that people who tip funds in the press are deliberately trying to mislead. We’re all human; we remember our successes and avoid dwelling on our failures. I’m just the same. Most financial advisers, in my experience, simply don’t realise quite how much their clients are lagging the market until they have their returns properly and independently benchmarked.

I’m sure as well that, most of the time, editors publish these tips in good faith and the sincere belief that they’re somehow doing us a favour. Most of the time they’re simply generating profits for fund managers, brokers and platforms at their readers’ expense.

I’ll say it again: the investing industry is built on a fairy tale. Like the emperor’s “new clothes”, the inconvenient truth that nobody can pick winners in advance is staring us in the face.

Am I being fair? Is there something I’m missing? If you’re an adviser, a fund manager or a journalist and you disagree with anything I’ve said, please get in touch via the Contact page. We always welcome feedback. 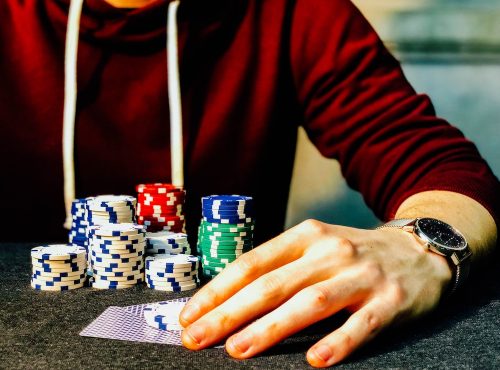 Manager risk and the impossible art of fund selection

One of the main advantages of indexing is that it eliminates, at a stroke, one of the biggest...