In an industry built on PR and marketing, Neil Woodford is box office. He’s photogenic, he always has something interesting to say and, most important of all, he’s got a decent record as a fund manager. No wonder he’s loved by the money sections, and by brokers, like Hargreaves Lansdown, who’ve profited hugely from his stellar status.

But Britain’s most celebrated stockpicker is having a bad run. Woodford Investment Management lost £200 million in just one day of trading when shares in Provident Financial dived on Monday. Another stock he’s heavily exposed to, the tobacco group Imperial Brands, is down 21% over the past 12 months, and the drugs company AstraZeneca is down 12.4%.

Investors in both the flagship Woodford Equity Income Fund and, even more so, the Woodford Patient Capital Trust, are starting to ask the unthinkable: Has Neil Woodford lost his magic touch?

As regular TEBI readers know, I’m pretty sceptical about the whole notion of active manager skill. It’s not that fund managers are unskilled; in fact, absolute skill in active management has probably never been higher. The problem is that relative skill — the type of skill that really matters — has been in steady decline.

Leaving aside his disappointing performance over the last year or two, the key question is this: Is Woodford’s historic outperformance down to luck or skill? The answer is that we simply don’t know. No one does. Not even Woodford himself. 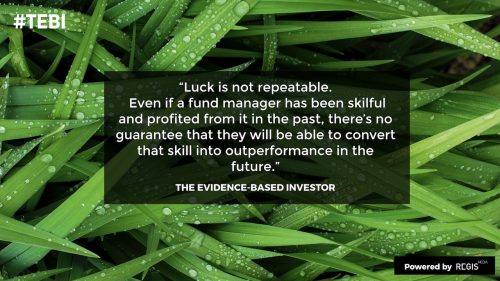 But think about it. If you spend hours on end flipping a coin, the chances are, sooner or later, you’ll flip ten heads in a row. There are oodles of funds — more funds than individual securities. Simply by the law of averages you would expect a few funds to outperform over long periods, even after costs. Very few funds actually do — even fewer, in fact, than you’d expect from random chance — which is why Woodford is the only British fund manager that many people have heard of.

What, then, should we make of Woodford’s recent sticky patch? First, let’s put this in context. People should be investing for the long term. If  Woodford manages to return to winning ways, this current wobble will appear a mere blip 20 years from from now.

But that’s a very big “if”. To quote financial adviser Brian Dennehy in a recent article in FT Adviser, Woodford “made the biggest and longest bet in fund management history and did so with extraordinary success” — the bet being that stocks perceived by the market as defensive (tobacco and pharmaceuticals, for example) would outperform.

“He appeared to wish to continue this with Woodford Equity Income,” Dennehy went on, “but nothing works forever, especially in fund management.”

For me, Dennehy nails it. No one knows the relative contributions of luck and skill to Woodford’s past success. But luck is not repeatable, and even if a fund manager has been skilful and profited from it in the past, there’s no guarantee that he or she will be able to convert that skill into outperformance in the future.

No, what we’re seeing with Woodford now is plain and simple mean reversion, once famously described by Jack Bogle as the iron rule of stock investing.

Sorry, Neil. It catches up with the best of us.