One of my father’s friends is a Scottish immigrant named Bill. He doesn’t have time for fools. “Could you talk to Bill about investing?” my father had asked. “He just fired his financial advisor.”

At the time, I was visiting my parents. After dinner, Bill dropped by. As Bill poured himself a beer he said, “I’ve had three different investment guys in the past five years.  I fired the third guy last week.”

Bill runs a company that repairs heavy-duty machinery. If one of his mechanics isn’t performing, he knows right away. “Investing is different,” I explained to Bill. “You’ll have to be more patient with your investments than you are with your mechanics. Even the world’s best investment strategy doesn’t win every year.”

I gave him a copy of my book, Millionaire Teacher, recommended a portfolio of low-cost index funds. That was three years ago. I wondered, at the time, whether Bill had the patience to manage a portfolio of index funds. This week, I got my answer when my father brought me up to speed on Bill and his portfolio.

“He gave up on the index fund account after about a year,” he said. “He wasn’t happy with its performance. He met a guy who promised stronger returns if he invested everything in oil.”

I wasn’t surprised. After all, plenty of people are a lot like Bill. They have unrealistic expectations. When their money doesn’t deliver, they often change their strategies.  That makes sense when we aren’t talking about investing. After all, most things in life provide an immediate feedback loop. If, for example, we’re trying to change a tire or bake a loaf of bread and our method isn’t working, we need to change our method.

But how would you feel about an investment manager who earned a compound annual return of 29 percent per year? Most of us would jump at an opportunity for such mouth-watering profits. But Bill might fire the guy. Plenty of others would do the same.

Let me explain. In February 2016, Wes Gray published a story for Alpha Architect, Even God Would Get Fired As An Active Investor. The former Drexel University finance professor wanted to see what would happen if a money manager could see the future. He assumed that an omniscient money manager started his brilliant work in 1927.

This divine manager looked at the S&P 500. He then selected the 50 stocks that would perform best over the next five years. Remember, this manager wouldn’t be guessing; he could see the future. Five years later, the infallible manager would change the portfolio to represent the stocks that would do best over the next five years. Every five years, he would build a new portfolio based on the future’s best stocks.

But our God-like manager would have crushed those returns, averaging a compound annual return of 29 percent. That would have turned the same $1 into almost $9 billion. My father’s friend, Bill, might have been happy for a while. But if he ran true to form, he would have eventually fired this guy.

After all, the year-to-year results would have sometimes looked horrific. For example, between 1927 and 1932, Bill’s portfolio would have dropped almost 76 percent.

This portfolio would have dropped at least 20 percent on ten separate occasions.  Each time, Bill would have likely given up and invested his money somewhere else. 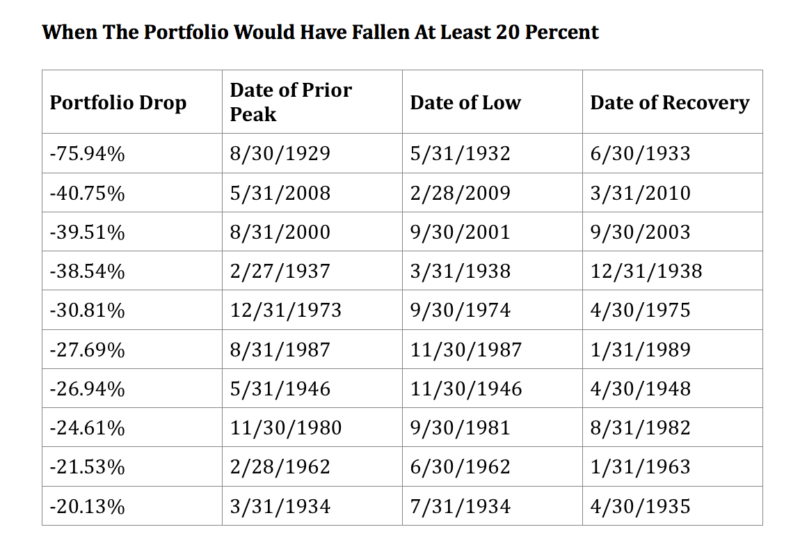 This story isn’t really about a God-like money manager. It isn’t even about my dad’s friend, Bill. Instead, it’s about human nature. We want results right away. That’s why the typical investor underperforms the funds they own.

For example, Morningstar reports historical fund performances. But it also reports how investors in each of those funds performed. If humans were rational, we would earn the same return as the funds that we invest in. But that doesn’t happen. Like my father’s friend Bill, we often jump ship when we think it’s going to sink, or when another ship passes that we think will sail faster.

Nobody can predict the market or the direction of a mutual fund. That doesn’t, however, stop many of us from trying. Such delusions blow holes in investment boats.

Instead, investors need to build diversified portfolios of low-cost index funds. They need to accept that stocks will sometimes sink. Nobody can predict the future, so when stocks fall, we need to stay invested and wait for better times. After all, God is much too busy to manage your portfolio. And even if He weren’t, many of us – including my dad’s friend Bill — would probably still find a way to mess things up.

ANDREW HALLAM is a personal finance columnist and former school teacher who famously built a million-dollar investment portfolio on a teacher’s salary. He has also written two best-selling books, Millionaire Teacher and Millionaire Expat. You can catch up with all of Andrew’s latest content on his blog.