It is, apparently, a good time to be managing a private equity fund. According to the alternative assets data provider Preqin, it currently takes PE firms 11 months on average to raising a fund, compared with the 19 months it took them in 2010.

And as well as spending less time raising money, they’re also raising more of it. PE funds raised $484bn in 2017, Preqin says, compared with $414bn 2007, before the global financial crisis.

The FT puts this interest in private equity down to “yield-starved investors desperately seeking a place to park their cash”.

But is investing in private equity funds really such a good idea? Ludovic Phalippou is Associate Professor of Finance at the University of Oxford’s Said Business School. He has recently written a book called Private Equity Laid Bare in which he challenges the assumption that private equity is the no-brainer investment that many institutional and high-net worth investors believe it to be.

Even more than the mutual fund industry, Professor Phalippou claims, the private equity sector is riddled with conflicts of interest. He says there are also serious issues around transparency, both in terms of fees and the reporting of fund performance.

If you’re thinking of joining the rush to invest in private equity, this interview is essential reading.

RP: Thank you your time, Ludovic. Tell me, how did you first become interested in the private equity space, and what did you set out to achieve with your book?

LP: Private equity is a perfect research topic. It’s a huge market, with huge sums at stake, and huge consumer welfare implications, and yet there’s relatively little research done on it. I managed to obtain unique data on private equity investing 15 years ago and I haven’t stopped working on private equity since.

There are very few textbooks on PE, and they tend to focus on war stories, and how partners succeeded in increasing significantly the earnings of the companies they managed. Those books are not really academic; they don’t tackle the topic through the lens of decades of academic research in financial economics.

My book is academic, yet also, I hope, accessible and entertaining. It is based on facts and rigorous studies. Each page took me two days to write. Everything is thought through and yet constantly revised, based on the feedback I receive. Also, half of the book is about the investors in PE funds, which is part of the business that’s neglected in other books.

RP: As we all know, mutual funds are regulated — not always especially well — by, for example, the FCA in the UK and the SEC in the US. What regulation, if any, is there of the private equity sector?

LP: There’s basically nothing. There are no rules about how to compute your track record, how to present it, and no standard contract. You can have as many vague and twisted footnotes as you want. Just the general rules apply — that you shouldn’t lie, for example. With all the creative and smart individuals working in PE, this is a rather low bar. 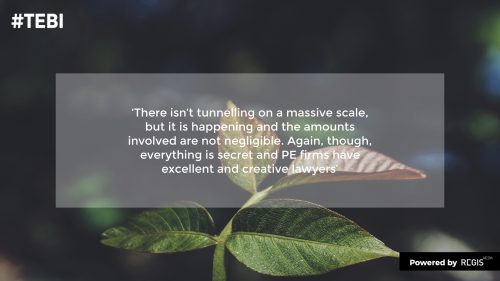 RP: You argue in your book that fees and charges for PE funds are even more opaque than they are for mutual funds. Give me an example.

LP: The contract might stipulate a management fee of, say, 2%, which seems standard. But the computations are not trivial. For example, from year 5 of the fund, it may be 2% of the cost of all the investments that are not exited (called the basis). But you need to check how everything is defined. For example, if you partially exit an investment, do you reduce the basis pro-rata or not (many do not change it at all)? Does the basis include transaction costs? Each definition changes the actual cost. The headline figure is therefore useless. In addition, there will be room for interpretation.

RP: In the book, you also warn about the conflicts of interest in the PE sector. Again, give an example.

LP: There are so many conflicts of interest, but here’s an example. A fund manager (let’s call him Joe) uses $80m from Pension Fund X, plus $400m from Bank Y, to buy Company Z.

Joe can, entirely at will, decide to open the cash tilt of Company Z to pay himself whatever he wants with the money that belongs to Bank Y and Pension Fund X is quite remarkable. Joe can do that by invoicing directly Company Z, which he controls, for services, which may be real or not, or be excessive.

Joe can be more subtle though. Joe could create a Company C and have that company charging all kind of services to Company Z (again, real or not).

The bottom line is that there are myriad ways to tunnel money in PE. There are some laws about this, and some investors may well be monitoring what’s going on. But I am not aware of any law suits won by the plaintiffs on any related matters.

There isn’t tunnelling on a massive scale, but it is happening, and the amounts involved are not negligible. Again, though, everything is secret and PE firms have excellent and creative lawyers.

LP: There are no rules when it comes to reporting performance. There is at least some oversight in the mutual fund space, and there’s misleading information there. But in PE there is no oversight at all.

Here is an example of misleading reporting. A PE firm launches a fund and shows the track record of the current team. They don’t actually lie; they just omit to say that they decided, ex-post, that most of the bad deals were down to a couple of individuals who have since been fired. It’s that simple.

The most pervasive practice though is the use of internal rates of return, which are easy to manipulate in PE because fund managers control the timing of cash flows. You see returns of 20% or 30%, but they all are IRRs. In other words, they are completely meaningless numbers, disconnected from the investor experience. 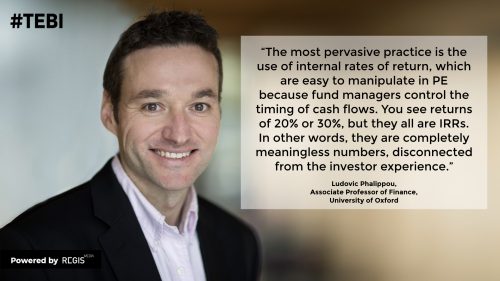 RP: We are finally starting to see more attention given to fee transparency and alignment of interests in traditional asset management. Are we gradually seeing more awareness of these issues in private equity?

LP: I have been writing about this for over ten years. I always emphasised that this was a first-order issue in PE. No one cared.

In the US, as a side product of the financial crisis, the Senate asked the SEC, among a long list of things, to look into PE. The SEC did and publicly mentioned that they saw weird things. Immediately it was all over the newspapers. When trustees and CIOs heard the news, they asked their PE division guys for an explanation, and they in turn questioned the fund managers.

As a result of this momentum, the Institutional Limited Partners Association, or ILPA, got some traction. It’s now well organised, and it’s bringing in concrete changes. It’s important to realise however that this is a long and difficult road. If they succeed it will take them a while, and I don’t see them succeeding without massive help from regulators.

RP: Why do think it’s taken so long — several decades, in fact — for the PE sector to start addressing these sorts of issues?

LP: Agency conflicts are the main reason. Most investors in PE knew about most of these things, or at least were suspecting it was happening. But for trustees and CIOs, this is way too specialised and difficult for them to understand. If you work in PE in a pension fund and make a noise about these practices, all you will end up with is PE being terminated and losing your job.  As investors in PE you need to promote the asset class even if you know that the arguments are based on shaky information.

RP: In traditional asset management, there’s a small number of firms, notably Vanguard, that are trying to be more transparent and keep costs down for consumers. Are there firms that are trying to do the right thing in private equity?

LP: There is a whole spectrum, but there isn’t a non-profit PE firm which would be a Vanguard equivalent. I think it would be a great business model. Many PE firms seem to be ethical and try to minimise conflicts of interest, even if that costs them money. But I am not aware of any firms banning the use of IRR as a measure of performance, for example. Usually, emerging market PE firms don’t have strong bargaining power, they can’t manipulate IRR easily due to the nature of the markets they operate in, and often have large anchor investors. As a result they tend to be the cleanest in my experience.

RP: Finally, how confident or otherwise are you that PE investing will eventually be given the same sort of scrutiny that we’re seeing in the mutual fund sector?

LP: As I’ve said, there’s now a strong momentum towards greater transparency. But, on the other hand, there’s also enormous lobbying and resistance. So we may get there, but it will take some time.