That’s what diversification is for. It’s an explicit recognition of ignorance.

Investment strategy should be based on the following few core principles. First, the market is highly, though not perfectly, efficient. Second, it therefore follows that all risky assets should have similar risk-adjusted returns (including accounting for the risk of illiquidity). Third, it then follows that you should diversify your portfolio across as many unique sources of risk that meet the criteria established in Your Complete Guide to Factor-Based Investing — persistence, pervasiveness, robustness, implementability and intuitiveness.

The reason we want to diversify across many independent sources of risk is that investors live in a world of uncertainty (not risk). There is an important distinction between risk and uncertainty. The difference is that risk exists when probabilities are known. For example, when we roll the dice, we can calculate precisely the odds of any outcome. And using actuarial tables, we can calculate the odds of a 65-year old living beyond age 85. Uncertainty exists when we cannot calculate the odds. An example would be the uncertainty of another attack like the one we experienced on September 11, 2001. How should investors address the issue of uncertainty? As Ron Ross, author of the The Unbeatable Market  explained, “the safest port in a sea of uncertainty is diversification.”

Paul Samuelson, winner of the Nobel Memorial Prize in Economic Sciences, summarised his thoughts on diversification: “I’m a big believer in diversification, because I am totally convinced that forecasts will be wrong. Diversification is the guiding principle. That’s the only way you can live through the hard times. It’s going to cost you in the short run, because not everything will be going through the roof.”

While diversification has been called the “only free lunch in investing”, it doesn’t eliminate the risk of losses. And diversification does require accepting the fact that parts of your portfolio will behave entirely differently than the portfolio itself and may underperform a broad market index (such as the S&P 500) for a very long time. In fact, a wise person once said that if some part of your portfolio isn’t performing poorly, you are not properly diversified. The result is that diversification is hard. As Cliff Asness noted in his thought piece Liquid at Ragnarök?, “losing unconventionally is hard.” I would add that because misery loves company, losing unconventionally is harder than failing conventionally. Asness also observed that living through hard times is harder than observing them in backtests. That difficulty helps explain why it’s so hard to be a successful investor. It’s our behavioral biases, and the mistakes we make because we don’t know the historical evidence, that explain why it’s so hard.

One of the more common mistakes both individual and institutional investors make is the tendency to equate the quality of a decision with the quality of its outcome. Poker players call this trait “resulting”. Nassim Nicholas Taleb, author of Fooled by Randomness, provided this insight into the right way to think about outcomes: “One cannot judge a performance in any given field by the results, but by the costs of the alternative (i.e. if history played out in a different way). Such substitute courses of events are called alternative histories. Clearly the quality of a decision cannot be solely judged based on its outcome, but such a point seems to be voiced only by people who fail (those who succeed attribute their success to the quality of their decision).”

In my book Investment Mistakes Even Smart Investors Make and How to Avoid Them, this mistake is called “confusing before-the-fact strategy with after-the-fact outcome”. The mistake is often caused by “hindsight bias”: the tendency, after an outcome is known, to see it as virtually inevitable. As John Stepek, author of The Sceptical Investor, advised: “To avoid such mistakes, you must accept that you can neither know the future, nor control it. Thus, the key to investing well is to make good decisions in the face of uncertainty, based on a strong understanding of your goals and a strong understanding of the tools available to help you achieve those goals. A single good decision can lead to a bad outcome. And a single bad decision may lead to a good outcome. But the making of many good decisions, over time, should compound into a better outcome than making a series of bad decisions. Making good decisions is mostly about putting distance between your gut and your investment choices.”

In his 2001 Harvard commencement address, Robert Rubin, former co-chairman at Goldman Sachs and Secretary of the Treasury during the Clinton administration, addressed the issue of resulting. He explained: “Individual decisions can be badly thought through, and yet be successful, or exceedingly well thought through, but be unsuccessful, because the recognised possibility of failure in fact occurs. But over time, more thoughtful decision-making will lead to better results, and more thoughtful decision-making can be encouraged by evaluating decisions on how well they were made rather than on outcome.”

Unfortunately, as Ken Fisher and Meir Statman noted in their 1992 paper A Behavioral Framework for Time Diversification, “three years of losses often turn investors with thirty-year horizons into investors with three-year horizons: they want out.” Because investors don’t know investment history, they fail to understand that, when it comes to risky assets, three-, five- and even 10-year returns can be nothing more than noise. That leads to the mistake of “recency”, the tendency to overweight recent events/trends and ignore long-term evidence. This leads investors to buy after periods of strong performance—when valuations are higher and expected returns are now lower—and sell after periods of poor performance—when prices are lower and expected returns are now higher. This results in the opposite of what a disciplined investor should be doing: rebalancing to maintain their portfolio’s asset allocation.

Over the last 10 calendar years, we have seen a wide dispersion in returns, with US large growth stocks outperforming other equity asset classes by wide margins. 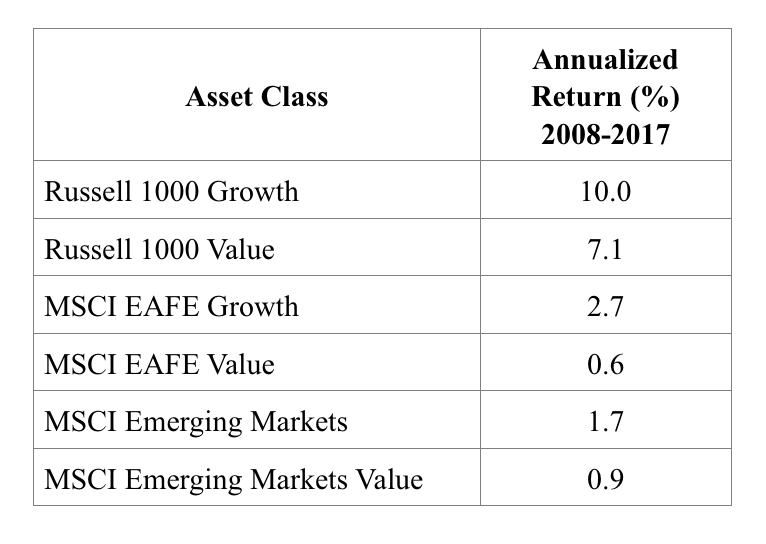 This dramatic underperformance of value and international stocks has led many to question their strategy. Before jumping to any conclusions, you should consider some other dramatic examples of underperformance, which demonstrate that even 10 years is likely noise when it comes to risk assets.

— Japanese large company stocks provided no nominal return over the 29-year period from 1990 through 2018.

As you consider the last example, keep in mind that Japanese investors also exhibit home country bias and dramatically overweight their home country equities. You should also consider how the world looked to investors at the start of that period—exactly the opposite of how it looks to today’s investors. Over the prior two decades, from 1970 through 1989, while the S&P 500 Index provided a total return of 750 percent, Japanese large stocks provided a total return of 5,623 percent, 7.5 times as great! Recency bias and resulting in 1990 would have proven to be very costly mistakes.

Here’s another example. As seen in the table above, international stocks have dramatically underperformed over the last 10 calendar years. However, the world looked very different to investors subject to recency bias at the start of the period. The following table shows the returns over the prior five years. 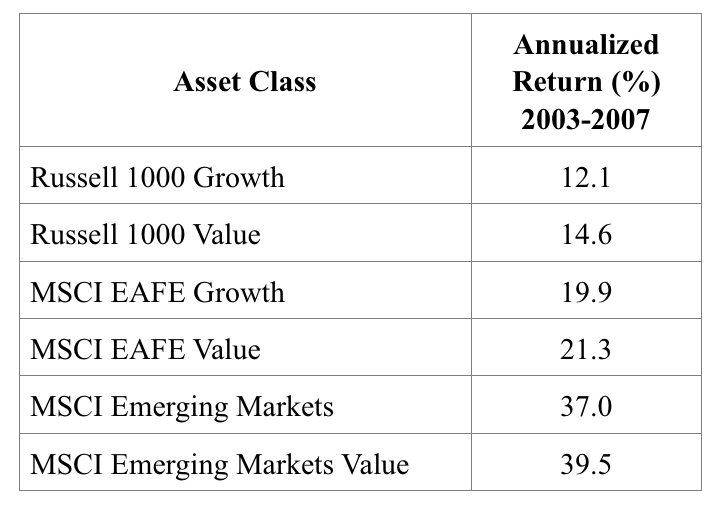 I hope these examples will help you avoid the mistakes of recency, home country bias and resulting. That said, it is always a good idea to be a sceptical investor. Thus, there is nothing wrong with questioning a strategy after a long period of underperformance. With that in mind, you should ask if any of the assumptions behind the strategy are no longer valid. Or did the risks just happen to show up? Seek the truth, whether it aligns with your beliefs or not. For investors, the truth lies in the data on persistence, pervasiveness, robustness, implementability and especially intuitiveness. For example, the three periods of at least 17 years when the S&P 500 underperformed five-year Treasuries should not have convinced you that US stocks should no longer be expected to outperform the far less risky five-year Treasury note.

Recognising that there is no crystal ball allowing us to see which asset classes, factors or sources of risk and return will outperform in the future, the prudent strategy is to diversify across as many of them as we can identify that meet the aforementioned criteria. The aim is to create more of a risk-parity portfolio — one whose risk is not dominated by a single source of risk and return. Unfortunately, that is the case with the traditional 60/40 portfolio, where the vast majority of risk is concentrated in market beta, typically 85 percent or more. And the problem of risk concentration is often compounded by home country bias (leading to vastly underweighting international equities).

To help you stay disciplined and avoid the consequences of recency, I offer the following suggestion. Whenever you are tempted to abandon your well-thought-out investment plan because of poor recent performance, ask yourself this question: Having originally purchased and owned this asset when valuations were higher and expected returns were lower, does it make sense to now sell the same asset when valuations are currently much lower and expected returns are now much higher? The answer should be obvious. If that’s not sufficient, remember Buffett’s further advice to never engage in market timing. But if you cannot resist the temptation, then you should buy when others panic.

Active investing is becoming harder, not easier, as passive grows

Be careful how you frame the problem