By our staff reporter

Catherine Howarth is one of the leading names in sustainable investing in the UK. ShareAction, the London-based charity and lobby group of which she’s been Chief Executive since 2008, campaigns for responsible and ethical investment, specifically using shareholder activism as a tool for transforming business behaviour. ShareAction works with major shareholders and NGOs to demand action on human rights, the environment and the Living Wage. Recently it was one of a group of NGOs that successfully filed a resolution at Shell’s AGM to set targets aligned with the Paris Climate Agreement.

Howarth was also a prominent advocate for the new regulations that come into force in October 2019, requiring all UK pension fund trustees to publicly demonstrate how they are factoring environmental, social and governance (ESG) factors into their investment decisions. Considering ShareAction was only set up in 2006, and has just 50 staff, it truly punches above its weight.

“For pension savers, we’ve got materials to support people becoming more aware of what’s going on in their pension fund and how they can influence it”, explains Howarth. “We provide free training to anyone that wants to attend a company AGM to put a question to the board. That’s such an empowering and effective thing to do, and we’re proud of bringing diverse voices and topics into company AGM season.” 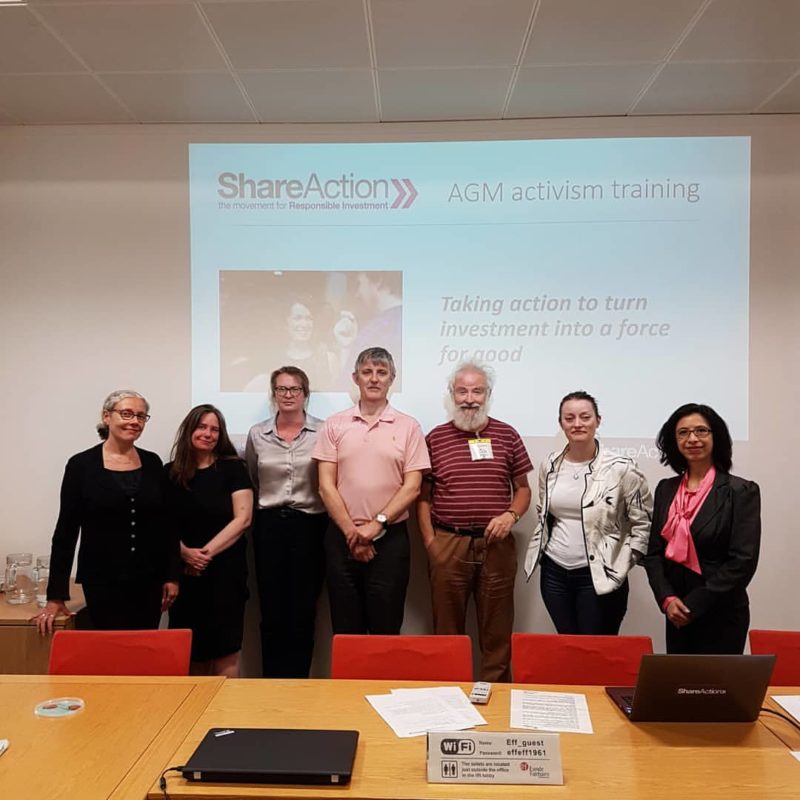 When asked what she sees as ShareAction’s biggest win to date, she has a personal favourite: “Tesco’s decision to commit to source 100% of its electricity from renewable power followed our AGM question challenging the board to take this step and an investor-backed letter we co-ordinated to make the same case. We were pretty thrilled when Tesco announced they’d go for it six months after their AGM.” It was, she says, a very sensible business decision. “Dave Lewis [Tesco CEO] looked at the business case and agreed it made total sense to switch away from fossil fuels… with those fridges and freezers, Tesco is one of the FTSE 100’s biggest electricity users.”

Shareholder activists are not always pushing on open refrigerator doors, however. Most ESG or ‘impact investment’ portfolios steer well clear of the likes of mining and oil companies. Given that ShareAction advocates buying shares to enact change from within, can this work together with ‘divestment’, or are they two opposite strategies?

“The two strategies can absolutely work together”, argues Howarth. “We firmly believe that if engagement is getting nowhere and there’s on-going financial risk to an investor from holding a company that refuses to reform, then the time has come to divest that holding. However, we also know that if enough investors in a company send a co-ordinated signal to its board that they want to see change, and those investors are willing to back that demand with use of their voting power, powerful results can emerge.”

A recent example saw Howarth involved in co-ordinating investors in Glencore earlier this year, leading to a major announcement to markets from the mining giant that it would cap coal production at current levels, stop harmful lobbying against environmental regulation, and start to align the business with the goals of the Paris Agreement. The Church of England led the dialogue with Glencore’s board but success was predicated on Glencore knowing there was a serious group of investors ready to file a resolution for the company’s AGM if concessions on coal and climate issues were not given.

Does she share the concerns of some that ESG investing – without any clear certification – can lead to greenwashing? Despite the many benefits of ESG investing, she concedes, they can “lead unavoidably to greenwashing, which is major problem in the industry now. Ultimately, the solutions to that must include well-enforced regulations that require of companies and investors robust disclosures made to a common standard. Only that will really restore and build confidence. The EU is serious about raising the quality of both investor and corporate ESG disclosures and alert to the risks of greenwashing. We are following their legislative agenda very carefully.”

Much of this comes down to open and reliable datasets. Here again ShareAction is taking a leading role. “I’m particularly excited about our programme, the Workforce Disclosure Initiative”, says Howarth. “In generating a new dataset for investors on the people employed in companies’ direct operations and supply chains, this programme has potential to give new prominence to the ‘S’ of ESG. ‘S’ issues are every bit as financially material, and indeed ethically concerning, as ‘E’ issues but the lack of robust data on ‘S’ themes has held investors back from paying them attention. This programme aims to change that and the early signs are that investors are as excited as we are. We just passed $14trillion of assets under management signed up to the WDI.”

To date, she says, “most impact investing has been confined to relatively small, unlisted firms doing some pioneering work but not, frankly, operating at the scale needed to tackle the world’s biggest challenges. If we take impact thinking into the public equities space, we could achieve impact at far greater scale.” How is that done? “Through what I’m calling impact-driven stewardship”, she continues. “This sees public equities investors taking a highly intentional approach to dialogue with the boards and management of public companies about dialling up the positive and dialling down the negative impacts generated by these businesses on people and planet. The outcomes need to be measured pretty rigorously and openly for this to be credible but we know at ShareAction just how effective shareholder activism can be in driving corporate behaviour change that has a positive impact. I’m excited to see pension funds and mainstream asset managers starting to embrace impact thinking in their capacity as stewards.”

Anyone with an interest in ESG issues should follow Howarth’s and ShareAction’s next steps closely. Currently, she says, she is “considering setting something up for individuals too as we’re aware that many more people with a bit of personal wealth want to be smart and proactive on ESG these days.”

ShareAction lit the blue touch paper in the UK for ESG awareness and activism. The next logical step is to make it a viable, practical option for the personal, evidence-based investor.

Calling UK-based financial advisers with an interest in sustainable investing

TEBI Editor Robin Powell will be compèring an event in London on 25th October called The Values-Based Adviser. It’s aimed at financial advisers, planners and investment consultants who want to learn more about sustainable investing —and about providing clients with investment solutions that reflect their personal values.

The keynote speaker is David Pilling, Africa Editor for the Financial Times. Andrew is going to be talking about his new book, The Growth Delusion, in which he argues that we need to learn how to value what makes economies better, not just what makes them bigger.

There are a limited number of FREE places left. To book your place, just follow this link: 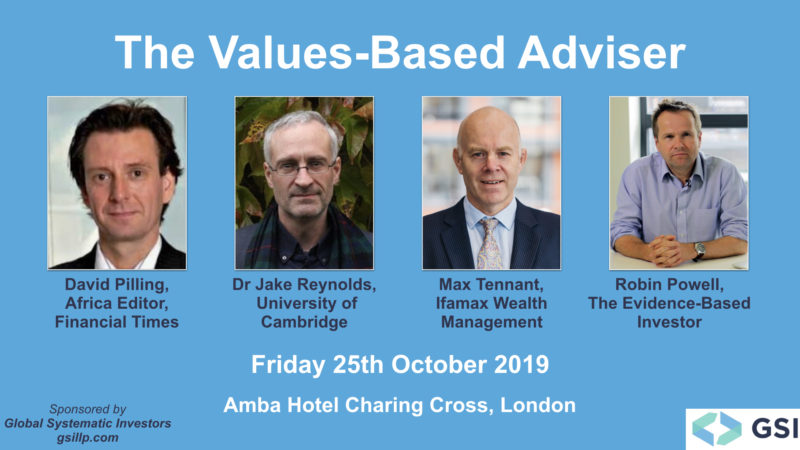 You can’t escape risk, so best get used to it

There’s no escaping the fact that being invested in the stock market involves a degree of risk....

By ROBIN POWELL   Investing Are you prepared for the next market downturn? (Mark Hebner)  How bull...