Robin writes: Warren Buffett has often commented that it’s less-well-off investors who are most likely to heed his advice to keep investing simple and stick to low-cost index funds.

“It seems so elementary,” Buffett said at Berkshire Hathaway’s annual shareholders’ meeting in 2016, “but I will guarantee you that no endowment fund, no public pension fund, no extremely rich person (wants to take my advice).

“They just can’t believe that because they have billions of dollars to invest that they can’t go out and hire somebody who will do better than average. I hear from them all the time.”

“Problems arise,” says Ben, “when ultra-wealthy people assume the normal rules don’t apply to them. (They think).. I don’t need to pay attention to the tried and true common sense investment principles. I’ll just hire the best people. I have connections. You get what you pay for. I can get access to exclusive deals and investments.

“There is no secret club that gets all of the best investment ideas, strategies, and funds. Adding degrees of difficulty to your investment plan doesn’t make your life any easier.”

I’ve had this same conversation a few times now with the team at Sparrows Capital. Sparrows is one of very few firms in Europe providing evidence-based investment strategies to wealthy families and institutions.

In this interview, MARK NORTHWAY, Investment Manager at Sparrows, spells out the company’s approach and the progress it’s making.

RP: Tell me briefly about the history of Sparrows Capital and where you see your place in the market.

MN: Sparrows Capital has its roots in academic studies. We implemented our evidence-based investment philosophy in 2008, and have followed a consistent, rule-based strategy across the global financial crisis and thereafter. We look to offer the benefits of our experience to other investors.

The Sparrows Capital approach is aligned with that of some of the largest and most successful investment pools in the world, perhaps most notably the Norwegian sovereign wealth fund (Norwegian Government Pension Fund Global), and we bring these proven concepts to UHNWI and smaller institutions.

You tend to deal with high-net worth clients and with institutions. In your experience, how receptive are the very wealthy to the evidence-based approach? And what about institutional investors?

MN: High-net-worth and ultra-high-net-worth clients tend to have made their money through skill and tactics, and the strategic, rule-based approach of evidence-based investing is appealing to this audience. Increased press interest and the outcome of the FCA Asset Management Market Study have been instrumental in highlighting many false assumptions around traditional asset management.

Institutions are generally receptive to the concepts of evidence-based investing, but they are often beholden to advisers and intermediaries whose business model relies on traditional manager selection processes and associated fees. This model is unlikely to change rapidly, although we are pleased to note the recent emergence of a small number of progressive investment consultants. 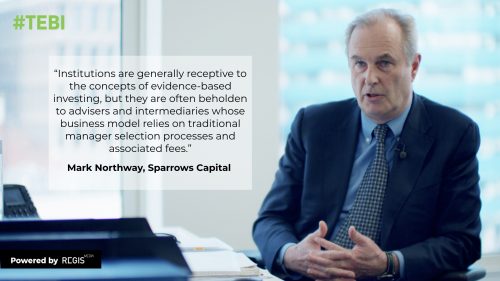 RP: Something that’s impressed me about Sparrows is the importance you attach to academic evidence. Indeed, the esteemed market historian Elroy Dimson is on your advisory board, isn’t he?

MN: That’s right. Everything we do is based on evidence, but only where that evidence is supported by robust academic studies. We are very honoured to have Professor Dimson as a consultant to our board. In addition to his distinguished academic credentials, Elroy brings priceless industry experience as a former chair of the Norwegian Government Pension Fund Global’s Strategy Council. We regard his involvement with Sparrows Capital as a validation of our approach, and we value his input into our philosophy and approach hugely.

RP: Sparrows has produced some interesting case studies of wealthy families and institutions, haven’t you? Tell me about those and what they demonstrate.

MN: We have analysed a series of traditional, actively managed portfolios for family offices and institutions. Our approach is to review the mandate since inception, graph the theoretical performance of the relevant opportunity set or benchmark, then overlay the simulated performance of an ETF implementation of that benchmark and the actual performance of the client portfolio (both net of fees). We offer this analysis to prospective investors.

The conclusions from these case studies have been both consistent and informative. The traditionally managed portfolios have underperformed the benchmark by significant margins, while the ETF implementation of course captures the full opportunity set, minus its minimal associated costs.

It is evident that most managers fail to add value through stock picking and that tactical allocation, intended to preserve portfolio value in difficult markets, in fact significantly reduces performance relative to a rule-based approach.

RP: Although, as a company, you passionately believe in evidence-based investing, I notice you don’t make a big song and dance of it. Has it been a conscious decision not to be too strident in expressing your opinions?

MN: We believe that the rhetoric around evidence-based investing has moved on from the rather adversarial language of the past. Our focus is on defining how the approach can be incorporated into overall portfolio design with a view to increasing overall portfolio efficiency.

Private assets, illiquid and emerging markets are examples of portfolio components which can benefit from a traditional active approach, and which may improve portfolio diversification and efficiency.

We do advocate that all portfolios should incorporate an evidence-based “core” component, to act as a tangible benchmark and to highlight the relative performance of other “satellite” portfolio components.

RP: You’ve recently produced an Wealth Preservation Suite for trustees. Talk me through that.

MN: Sparrows Capital generally provides a bespoke portfolio solution for each investor. However we have identified that trustees have a fairly consistent investment criteria, and that they look for the reassurance of a productised approach. We have therefore put together our value preservation suite for trustees.

On the back of feedback collected from trustees, whose main concern is preserving and enhancing wealth, we designed the suite comprising two “protect” portfolio and two “enhance” portfolios – in GBP and USD – all toward the lower end of this risk spectrum. The portfolios are designed specifically for trustees, with limited target volatility and drawdown characteristics. Underlying investments are through high efficiency ETFs to control costs.

RP: Like me, Mark, you’re a supporter of the Transparency Task Force. Are you hopeful that, in the UK at least, we’re at last moving towards a fairer, more transparent investing industry?

MN: The industry is being dragged, kicking and screaming, towards a lower cost, higher transparency marketplace. Initiatives such as the TTF are very helpful in this process, as are regulatory interventions (MiFID II, FCA Asset Management Study) and pressure from the media and from ETF providers. Nevertheless, reporting remains highly opaque at this point, in terms of both performance and costs.

Investors undoubtedly benefit from lower costs and higher efficiency, but these in turn reduce competition in the marketplace over time. The merger of Standard Life and Aberdeen is a classic example of market consolidation in the search for economies of scale.

An element of uncompetitive market behaviour that is often overlooked is the process of switching manager. Portfolio transfers are often very, very slow and involve arcane documentation and verification processes. The FCA needs to monitor portfolio handovers between participants and to take action where processes are intentionally delayed or obstructed.

RP: One of the criticisms levelled at MiFID II is that it creates a higher barrier to entry for smaller firms like your own. Is that a view you share?

MN: MiFID II represents a massive regulatory barrier to new market participants, and favours the very large incumbents who are able to distribute their compliance costs across their whole asset base. There is no easy solution to this, other than a move to a tiered, proportionate approach to the regulation of smaller firms. But I see no evidence of such an approach on the horizon.

RP: Finally, what are your hopes for Sparrows Capital? Where would you like to see yourselves in, say, five or ten years’ time?

MN: I would like to see Sparrows Capital as the “core portfolio manager” of choice, possible with model-based implementations for IFAs and retail clients. Over time the management of client’s core portfolio using an evidence-based approach is likely to shift from an ETF implementation to a single-stock implementation allowing more granular design of multi-factor portfolios.

Regis Media, which produces The Evidence-Based Investor, recently made a this video about Sparrows Capital’s Wealth Preservation Suite for fund trustees: