I love Vanguard. No company has done more to drive down costs for investors. The inflows it’s seen in recent years, particularly in the US, are truly remarkable. But will Vanguard go on, as many commentators predict, to dominate the global asset management industry? I wouldn’t be unhappy if it did, but I’m not convinced that it will.

I’ve just written a piece for Kurtosys about the prospect of a rival to Vanguard emerging in the form of the technology firm Apple. To be honest, Amazon, Facebook or Google are probably likelier challengers — I chose to write about Apple as it’s the brand I’m most familiar with — but I expect at least one major tech or media firm to announce its intention to disrupt this industry in the next two or three years.

So, why isn’t global domination by Vanguard a nailed-on certainty? 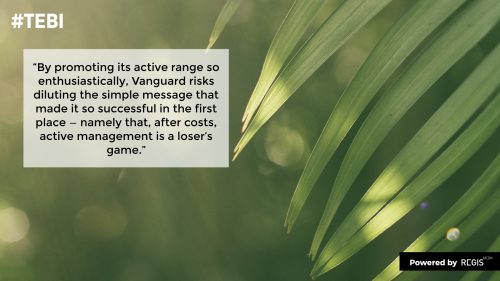 For a start, BlackRock is currently the world’s largest asset manager, by some distance, and its assets under management continue to grow, only not quite as fast as Vanguard’s. Analysts say it could be another four years, if current trends continue, before Vanguard overtakes it.

Another factor, as Owen Walker explained recently in the FT, is that the ferocious fee-cutting we’ve seen from Vanguard can’t go on indefinitely. Unless it creates its own indexes (as I would like to see it do), the scope for further cost reductions to its passive and smart-beta products is very limited. True, the cost of its active fund range could fall further, but again, most of the fee-cutting has already been done.

I also have reservations about Vanguard’s messaging. The active funds I just mentioned are a case in point. Vanguard has clearly taken a commercial decision to hang its hat on low fees, and it’s true that the most important thing an active investor can do to increase their chances of outperforming is to choose cheaper funds. But by promoting its active range so enthusiastically, Vanguard risks diluting the simple message that made it so successful in the first place — namely that, after costs, active management is a loser’s game, and that you are far more likely to achieve  a better outcomes by investing, for the long term, in low-cost index funds instead. 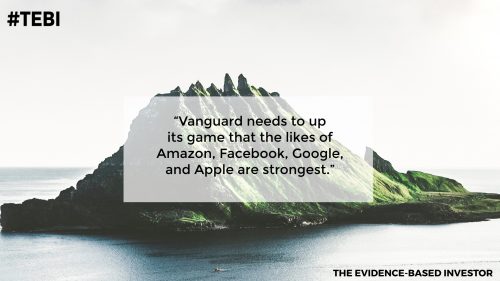 Another issue, related to the last one, that makes me wonder whether Vanguard will continue on such a steep trajectory is how it markets itself. As a company, Vanguard isn’t big on marketing at all. That’s been a good thing in the past; after all, a large proportion of active management fees are used to fund expensive PR and ad campaigns. Also, as its former chief executive, Bill McNabb, used to say, there’s little need to splash out on marketing when the media talks about Vanguard in such glowing terms without it.

But, as with fee-cutting, Vanguard can’t expect the media honeymoon to last, especially with other players increasingly looking to compete with it for control of the moral high ground. It particularly has its work cut out in markets outside the US where most consumers have frankly never heard of Vanguard. To replicate its US success in other markets, it will need to invest far more than it has done in telling its story, in producing content that strikes a chord with end investors, financial advisers and other intermediaries, and in engaging with clients, prospective clients and financial professionals on social media.

It’s in precisely those areas where Vanguard needs to up its game that the likes of Amazon, Facebook, Google, and Apple are strongest. All of those firms have built vast audiences of largely loyal fans right around the world. As recent revelations about Facebook have shown us, they know far more about us than most of us ever realised. They also have the ability to produce and curate relevant content in every language and deliver it to us, whenever they want, wherever we are and whatever we’re doing.

Yes, Vanguard may indeed become the world’s biggest fund manager somewhere around 2021, but how long it stays there is quite another matter. By then, I’d be surprised if at least one of the Silicon Valley giants hadn’t declared its hand. The disruption of asset management has barely started.

Here’s my article on Apple. Please do share it if you find it interesting: