Victor Haghani is a most unlikely convert to index funds.

Born in New York and educated at London School of Economics, he followed his Iranian father into trading securities. He was an arbitrageur at Salomon Brothers, and then at the hedge fund company, Long Term Capital Management.

Famed for its highly leveraged trading style, LTCM collapsed spectacularly in 1998 and became the subject of one of the biggest bailouts in Wall Street history. Haghani was later described, in Roger Lowenstein’s book, When Genius Failed, as “a natural trader” possessing “an intuitive feeling for markets, and a volatile, impulsive streak”.

How things have changed. About 15 years ago, during a long sabbatical from the financial industry, Victor Haghani underwent a conversion. Beating the market, he realised, was exceedingly difficult, especially after costs, and a far better way to invest is via low-cost index funds.

In 2011, he founded the online investment manager Elm Partners. Based in London, it serves high-net-worth investors globally, including the US, and it charges a fee of just 12 basis points. 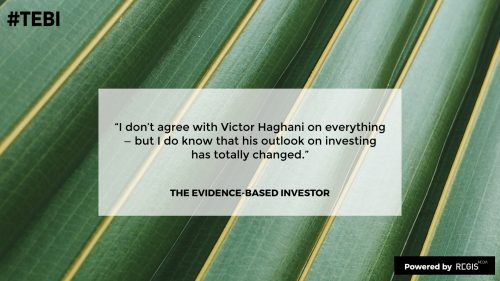 I must say, I’ve had some interesting conversations with him about his background. LTCM famously counted Nobel Prize-winning economists Myron Scholes and Robert Merton among its board members — a fact that, as an advocate of investment strategies based on academic evidence, I’m often reminded of by those who disagree with me.

Without claiming to be an expert on the subject, it seems to me that the strategy at LTCM had very little to do with what I would call evidence-based investing at all. It was, in many ways, the complete opposite of it.

As anyone who’s seen his TedX presentation, Where are all the billionaires? And why should we care?, will know, he’s an extremely articulate advocate for long-term, low-cost, highly diversified investing.

I’ve recently made a video with Victor called Sensible Investing in a Nutshell, in which he revisits the issues raised in that TedX talk. At the last count there were just over 500 billionaire families in the US; but, if the 4,000 millionaires alive in 1900 had invested their money passively in the US stock market, and the money had simply been left there to grow, there would be 120,000 billionaire families today — in other words, 240 times as many as there actually are.

So, why are there so few billionaires amongst us today? Two reasons, says, Victor. The first is the cost of active fund management. The second, and even more important factor is behaviour — in other words, the way we can’t help ourselves tweaking our portfolios, buying this and selling that, and trying to dip in and out of the market at just the right time.

The video concludes with some simple, no-nonsense advice for young people on how to invest for the future.

I hope you enjoy watching it as much as I enjoyed making it. And if you know someone who’s starting to think about investing, please show it to them; you’ll be doing them a big favour.

According to Forbes Magazine, there were, at the last count, just over 500 billionaires in the US.

But the former hedge fund trader turned index investor Victor Haghani says therein lies a puzzle that has important implications for how we invest. Here’s a clip from a TedX video he presented called Where are all the billionaires? And why should we care?

Victor Haghani says: “Let’s start with this fact. $1 million, invested passively in the US stock market, in 1900 would have grown to $30 billion today. Ka-ching! Now, you might say, wait a minute, $1 million was a lot of money in 1900, and you’d be right, it was. However, historical records indicate that we had 4,000 millionaires in the US in 1900.

The question then is, why haven’t investors been able to match the returns delivered by the stock market?
Well, aside from consumption and taxes, Victor says there are two main reasons. The first is the cost of investing — in other words, the commissions, fees and spreads that the financial industry extracts from investors.

There’s a very simple way to reduce those costs — use low-cost index funds. But most investors continue to favor more expensive, actively managed funds instead. What are the reasons for that?

Victor Haghani says: “One is that there’s just a feeling that we as humans have of exceptionalism, that we all think we’re a little bit above average in whatever we do. So the idea that hope springs eternal among people in whatever it is that we’re doing I think also applies to investing. So despite knowing that, on average, actively managed funds are not going to do very well, we hope that we can identify the ones that will do well.

“The second thing is that, as consumers, we’re conditioned to feel that when we pay more we’re getting something that’s better. Investing is the exception to that, where paying less is actually giving us a better outcome and a better product.”

So, how much is it costing investors to use actively managed funds?

Victor Haghani says: “Today, on average, investors who are not indexing are probably costing themselves one to two per cent, when you add up all of the costs in terms of the frictions and the fees.”

But, says Victor, there’s a bigger reason why investors fail to capture market returns, and it may surprise you. In the words of Pogo, “we have met the enemy and he is us.”

Victor Haghani says: “I think the culprit here, very simply put, is return chasing. It’s investors moving their money slowly into whatever it is that’s doing best at any moment in time, taking their money away from whatever has been doing worse. And that return chasing is real cause of a shortfall in investor returns.

Three per cent a year is a huge drag on your investment returns — especially when you add it to the one or two per cent you’re losing by using active funds. What, then, does Victor Haghani recommend that young people do?

He says: “Try to save as much as you can. Try to save 15% of your income. Put it into a low-cost global equity index fund. Put most of it into that, because you’re your and your human capital is more than your financial capital, so maybe put 90% of your money into that. Do it in a tax-efficient way if possible, if you have the ability to put it in a tax-advantaged retirement account. And just stay the course. Keep putting money in there until you’r either old or rich. And then you can drop your 90% lower.”

So, there you have it — sensible investing in a nutshell.

If more people start investing this way now, we’ll have a much better chance of avoiding the looming pensions crisis. And, come the turn of the next century, there’ll be far more billionaires around than there are today.