A previous note of ours looked at the question “Where has the Value premium gone” (here). There have been many similar research notes circulating on this topic. Two interesting recent contributions come from Fama and French, who studied the value effect in their landmark paper in 19921, and Arnott et al. 2019, some of whom work at Research Affiliates.In the latest paper by Fama and French, “The Value Premium”2, the authors examine the question whether the expected value premium (which they define here as the difference between value portfolio returns and a market-weighted portfolio) declines or even disappears entirely after the period they originally studied between 1963 to 1991 (their “in-sample” period). For example, during this period, value stocks across the US market (large and small) returned 0.42% per month with a t-statistic of 3.31 i.e. a highly statistically significant result. This (amongst other such studies) is a key reason why researchers and practitioners consider value to be an important return factor in equity markets. Since then however, returns to value stocks have been lower. In the period 1991 to 2019 the market-wide value premium was just 0.11% per month (t-stat 0.60), much lower than in the first period. Over the full period up to 2019, the corresponding return premium was 0.26% (t-stat 2.37)) – still a statistically significant result. The issue is whether we can say that the premium is meaningfully lower in the period since 1991 (their “out-of-sample” period) and that the expected premium is also lower.

Fama and French note that the spread in book-to-market (B/M), i.e. the difference in the respective B/M ratios of value and growth portfolios, has declined over the two periods. They also show a statistically significant relationship between the prior B/M spread and the value premium each month over the full period. Since on average the spread has declined in the post-1991 period, that explains some of the decline in the value premium. However, they caution that in their analysis, the remaining volatility of the value premium is high after controlling for the B/M spread. Hence, they state “the high volatility of monthly value premiums clouds inferences about whether the declines in average premiums reflect changes in expected premiums.” Moreover, they state that there is insufficient statistical evidence to argue that the expected value premium in the latter period is any different from what it was in the first “in-sample” period. So, from this analysis, there is no reliable evidence to argue that the expected return of the value factor may be lower going forward – although it does not exclude the possibility that it might be. As French whimsically comments here: “There are a lot of questions one would like to know the answer to, but you just can’t tell…If I get to ask God a question, I’m probably not going to ask this one.”

The second paper mentioned above takes a different perspective on the issue and provides a stronger case for why we might argue that the value premium is likely to reassert itself in the future. Among the authors are Robert Arnott and Campbell Harvey. By way of background, Robert Arnott is a distinguished quantitative practitioner and founder of Research Affiliates where he and his colleagues developed the value-oriented Fundamental IndexTM strategy. Campbell Harvey is a highly regarded academic at Duke University who has also recently written a well-known critique on the academic proliferation of factors and recommends setting the bar much higher before recognising a factor as having statistical validity.

In their paper “Reports of Value’s Death May Be Greatly Exaggerated”3, the authors examine various reasons for why the value premium has been negative in the period after the Global Financial Crisis (GFC), which they take as mid-2007, compared to the period before (from 1963). Among other issues, they investigate whether there is evidence that a/ investors have crowded into value stocks, potentially diminishing the premium going forward; b/ there is less migration from value to growth (an important source of the value premium historically); c/ there has been a change is the profitability of either value or growth stocks to the detriment of value and/or benefit of growth stocks. In a careful analysis, the authors decompose the difference in returns between value and growth stocks into three components:

The migration and profitability components are central to the value premium. On average, the returns associated with migration exceed those of the returns linked to profitability differences. However, the effect of the revaluation of value and growth portfolios will buffet their relative returns from period to period and is a considerable source of risk – as is currently in evidence – since it can trend in one direction for extended periods (see the dotted line in the last chart below). Revaluation cannot persist for ever otherwise there would be an excessive bubble in growth stocks that would eventually revert.

Subtracting the revaluation component gives what the authors call the “structural” component of the value premium which comprises the profitability and migration components. In their analysis, they show that both components are similar in the post- 2007 period compared to their respective levels in the period before the GFC. As before, the migration component is stronger than the profitability component. In fact, the revaluation effect explains more than 100% of the difference in returns between value and growth stocks since 2007 mainly because growth stocks have become more expensive. This is clearly not an outcome driven by investors crowding into value stocks – quite the opposite and, if anything, seems to reflect herding into stocks with high growth opportunities. This is not to say that growth stocks will not deliver higher profits compared to value stocks in the future, they almost surely will. However, they are priced at a level that reflects that and more. History shows that they eventually revert from these elevated levels.

Another topic that Arnott et al. examine in their paper is whether price-to-book is still meaningful as a metric of value, especially as we have moved into an information and technology driven economy. They suggest that it makes sense to incorporate intangibles when considering the fundamentals of companies. At the least they support the use of other metrics other than just book-to-market when evaluating whether companies are value or growth. We will revisit this issue in a subsequent post.

Below we update the charts we showed before that show the relative returns of value and growth stocks globally. The details of portfolio construction are in the notes at the end5. A chart of the returns is shown in the figure below as the growth of £1 invested in each portfolio. Note that the period covered in our charts below only covers the later of the two periods that Fama French consider, as we do not have data for global developed markets going back to the 1960s. 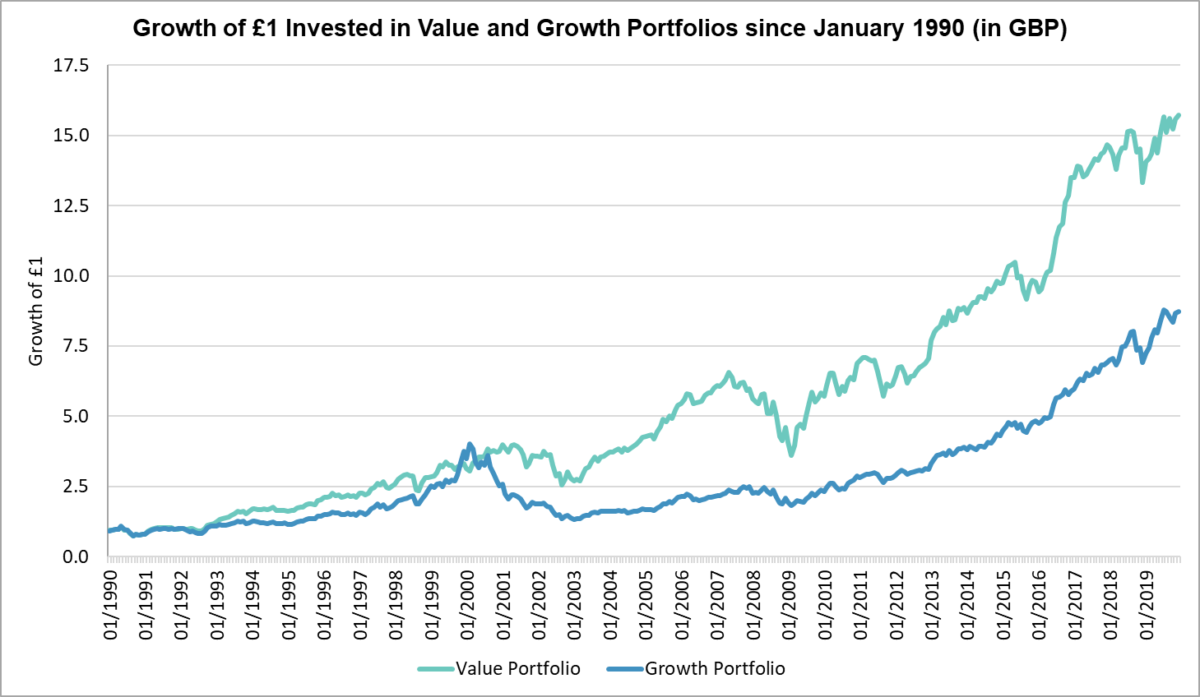 To track the relative returns of value vs. growth, each month we subtract the return of the global growth portfolio from the global value portfolio, and we cumulate that sum through time as shown in the chart below. 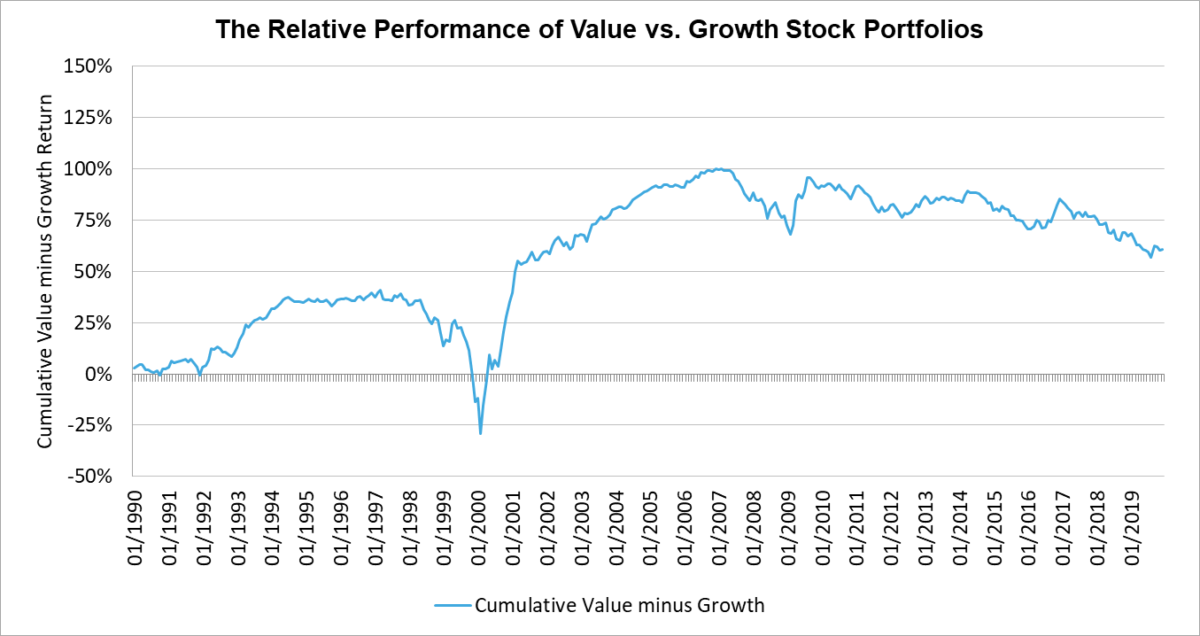 The third chart below shows the P/B ratio of the growth and value portfolios constructed as above as well as that of the overall market, all as solid lines using the left-hand scale. Note that, as Arnott et al. also show, the relative P/B level of growth vs. value has been climbing since 2007. At the end of 2019, using our portfolio construction procedure, growth stocks traded at a P/B level of 10.59 vs 1.19 for value, and therefore the ratio of their respective P/B levels was 8.92 – a level last reached in 2000. 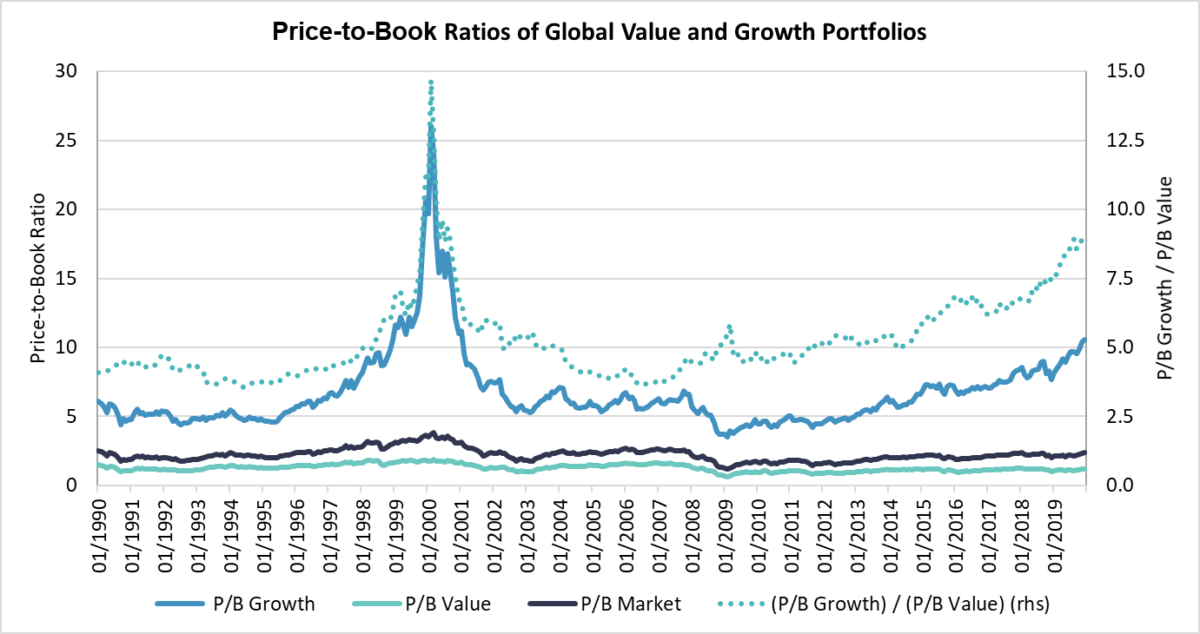 Even a relatively limited reversal of the valuation spread between value and growth stocks should provide a benefit to the future relative returns of value stocks. However, there’s no telling when such a reversal could occur, or how much wider the spread could get in the meantime.

If you are a UK-based financial adviser or planner, and you would like to hear Garrett Quigley speak, why not register for The Values-Based Adviser in Birmingham on Thursday 23rd April?

The event will be compered by TEBI founder Robin Powell.

There’s an excellent line-up of speakers, and we’re going to be looking at:

— the growing interest from clients in sustainability issues;

— the difference sustainable investing can make to the world around us;

— how to engage with clients and prospects about their personal values; and

— how to invest clients’ money sustainably in an evidence-based way.

It costs £25 per adviser. If you or any of your colleagues would like to come, here’s the link to register: