The most important question investors need to ask themselves, says Lars Kroijer, is whether they have a market edge. If you don’t, he says, you shouldn’t be trying to beat the market — or paying anyone else to try to beat it in your behalf. Here he explains how it’s very unlikely that you do have an edge.

This is Part 2 of a three-part series. Last week Lars gave us his opinions on how to respond to stock market volatility. We’ll be publishing Part 3 next week.

In your book, Investing Demystified, you counsel against people trying to manage their own investment portfolio. Why do you feel so strongly about that?

There’s one certain way to lose a lot of money, and that is to trade a lot. You’re sure to lose, so don’t do it. I hear stories of people who day-trade futures on the markets; it’s a miracle to me that those people stay in business.

I look at general retail investors and see people trading on the basis of not very much information, and not very good information. They certainly don’t have an edge over the market. Not only that, it also takes a ton of time. They get up and devour all the financial websites, chat rooms and financial pages. Sometimes they haven’t read the annual report, and they certainly don’t have access too professional research. So not only are they at a huge financial disadvantage, with all the costs of trading, and the lack of information and robust analysis, but they also have a day job. To me it seems incredibly naïve to think that you can sit there in your boxer shorts on a Saturday morning and outperform the markets. There’s overwhelming academic evidence that you can’t.

So that’s what you’re up against. You have to think that you can beat the market to play the game. You also have to think that it’s worth your time. This is something people fail to understand. Let’s say you have a portfolio of £100,000. On the one hand you can buy an index tracker, and let’s say, historically, the markets have gone up 4% a year above inflation. On the other hand you can say, I’m going to do better than the market. What you’re getting paid for your time is only what you outperform the markets by, after all your costs and expenses. You can get the market pretty much for free by going to Vanguard, iShares or any other index fund provider. You’ve got to price your time. A lot of people forget to do that. OK, some people see it as a hobby, or, I don’t know, they do it instead of going to a casino. I would just argue that most people would be far better off if they just stayed away.

I get emails daily from readers and people who’ve watched my YouTube videos, and a surprisingly large proportion of the comments are about the joy of not having to read the financial news every day. They don’t have to read every new article about Google because Google is now only 1% of their overall exposure. This is a huge side benefit to indexing that is often not appreciated enough. 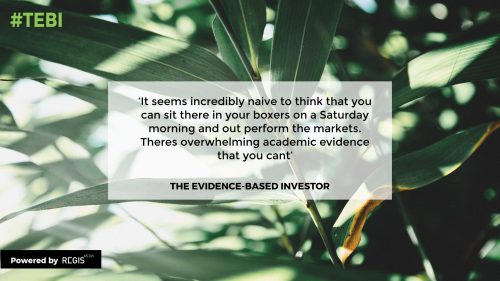 OK, so if an investor doesn’t have a market edge (and that’s most of us), they shouldn’t buy and sell stocks themselves. But what about paying active fund managers, who might have a market edge, to try to beat the market for you?

Well, you’ve got to take a step back and ask, what do the statistics say? The statistics say that over a ten-year period, one or two managers in ten will outperform their benchmark index. What does that mean? That means that if you’re looking at a smorgasbord of hundreds of active managers, 10 to 15% of those will outperform the market over a ten-year period. Can you pick those winning active managers ahead of time. Almost certainly no. The ones that have done best in the past statistically don’t do better in the future. And remember, it might look as though all the funds are still standing after ten years, but many have died because they underperformed.

So, you shouldn’t manage your own money and you shouldn’t use an active manager — in both cases because, before the fact, you can’t predict who the winners are going to be. So there’s a very compelling argument for accepting that you cannot beat the market and should instead buy an index tracker.

An important theme in your book is the cost of using active funds. What costs do investors incur, over and above the annual management charge?

Imagine you have two people and they both have £100 to manage. One buys a tracker fund, and the other buys an actively managed fund. An active manager is someone wearing an expensive suit who gets paid a lot to pick stocks, who goes and sees all these businesses, and talks to management. They have a whole team around them. And when they’ve done their analysis they’ll go into the market and buy shares, often frequently. And when they do that they incur commission. They also incur the price impact of the stock; in other words, some of these stocks are illiquid and they move the price by buying or selling it a lot. And then there are audit fees and accounting fees. And whenever you see a big billboard advert for a fund, that’s paid for indirectly with the fees you pay. So it’s not just the headline number. There are all sorts of other fees which the manager incurs managing your money. Now those fees are much higher for active managers than they are for passive managers.

Another problem is that you don’t know how often your fund manager is going to trade in any particular year.

Yes, it varies a lot from manager to manager. They’ll often give you a good idea, but you have to get into quite detailed knowledge of the fund manager to figure it out. Even then, it’s not entirely precise because they obviously want some leeway to act in the market as they see best.

You were, yourself, a hedge fund manager. Hedge funds seem to be suffering an identity crisis. What are they actually for?

Oh, I wish they knew! Hedge funds are investment funds. They’re essentially offshore vehicles that hedge movements in the markets. There are many different types of hedge fund. There about 10 to 12,000 of them in the world today, and they do all sorts of stuff. Some will do long-short equity, which means they might be long Facebook and short Google, and therefore the returns you make from investing in that fund is not dependent on the market; that’s a market-neutral hedge fund. Others might be long French government bonds and short German government bonds. So there are many different types of hedge fund. But the overriding theme is that they’re very expensive to buy, and very often the return profile that you get from them is not like that of the market.

So, is there ever a case for using hedge funds?

I think hedge funds can be a great investment, but they’re often not! The premise of hedge funds can be great. Say you could invest in ten hedge funds, and let’s say that you expect the return from each of them to be 10%. Let’s further say that none of them is correlated to the market, or to each other. Having a return of 10% a year, regardless of what happens in the markets, would be the nirvana of investing, but the reality has not been like that. When 2008 hit, hedge funds did worse, just like everyone else, so returns are not as uncorrelated as they at first seem. And of course there’s an asymmetry that if a hedge fund does really well, because of the performance fee that they earn, they get paid a lot. When they don’t do well, they don’t give the money back — or most of them don’t give the money back. So that’s an asymmetry that’s costly for the investor over time. 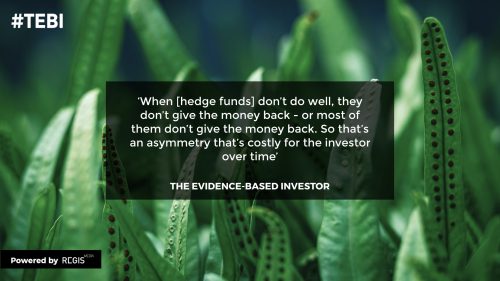 The obvious example is the global financial crisis. Why did the subprime market go pear-shaped? There were were lots of reasons, but one of them was this perception that the US housing market couldn’t all decline at once, because the Miami, Denver, LA and Las Vegas markets, for example, were uncorrelated. It turned out they were not. How did people get hurt by that? They said, I’m going to buy an awful lot of these bonds that indirectly have exposure to the US housing market, because it’s a diversified investment, when really it was not. So that’s a case of people thinking they’re  diversifying, but they’re not, and as a result they put much too much into a concentrated portfolio, and it all goes pear-shaped all at once.

Another example I like to give is this. Imagine you’re an insurance salesman in Florida and you insure oceanfront condos against hurricanes. You get the premiums and with them you invest in oceanfront condos. That would be the worst thing you could possibly do. Why is that? It might go well, and there may be no storms, so not only do you not pay out for insurance, but the investments also go well. But if it goes poorly, it’ll go terribly poorly all at once and for the same reason. That’s the kind of thinking people don’t do enough of in their own private lives.

Something else you strongly warn against in the book is being too heavily concentrated in one particular geographical region.

Yes, there are lots of examples of where local stock markets go bust when there are problems in the local economy. Latin America and Asia have a lot of examples like that.

The Japanese stock market was a great example. I remember when I went to university, all we could do was talk about the Japanese market, and the “miracle”, and how Japanese production techniques were going to dominate into the future. This was in the early- to mid-1990s. Since then the Japanese market is down 75%. And this is now 25 years later. If you look at that from the perspective of Japanese investors — which incidentally is an interesting case of people who don’t look outside their own universe of opportunity — wouldn’t it have been great to have been in that small number of investors who diversified internationally? If you look at the local banks, the local real estate market, local insurance companies and people’s local savings, they all went down at the same time and for the same reason, namely the Japanese economy. The ones who had diversified globally would actually have been part of a rising market.

Next time: In the third and final part of this series, Lars Kroijer discusses property investing, cryptocurrencies and the financial media. He also explains the value of using a financial adviser.