One of the many hilarious definitions in Jason Zweig’s The Devil’s Financial Dictionary is his explanation of the term plate-lickers. Yes, you read that correctly — plate-lickers.

It is, Jason explains, “the financial industry’s contemptuous term for retirees who attend brokers’ educational’ seminars and ravenously eat the free food while sagely refusing to swallow any of the lousy investment advice that is also on the menu.”

Retirees — and those, like me, who aren’t quite so advanced on their investment journey — are invited to these sorts of events all the time. I wrote a few weeks ago about turning down an invite to a “complimentary” event near me, prompting suggestions from several TEBI readers that I should have gone anyway to ask some awkward questions.

RICK FERRI recently received an invite to a “free dinner and retirement discussion”, and he and his wife did decide to accept. This description of what they found there is amusing and depressing in equal measure.

I was so excited! It was our first “free dinner and retirement discussion” since moving into an over 55 community last summer. The flyer came a few weeks ago. The restaurant looked great and it wasn’t far away. I sent an RSVP and we were confirmed, three times.

My wife and I arrived a few minutes early and were directed to a private room where the dinner and seminar were being held. I thought we’d have to wait for other guests to arrive, but to my surprise, we were the last couple to be seated. The other ten couples were already eating their salad and skimming through the glossy brochures.

Everyone looked to be in their 60s or 70s, which was expected because they live in the same retirement development that’s routinely trolled for business by banks, financial firms, and insurance companies. I learned by reading the speaker’s bio that he was an expert in retirement planning, although his credentials were from the insurance industry, and he had a financial planning certificate.

The host introduced himself to the room shortly after we took our seat and started eating our salads. He welcomed us, introduced his staff, then said, “We can’t serve the main course until you complete the questionnaire in your package. Then came Lie #1, “Please understand that we are a fiduciary, registered with the SEC, and we are required to have this information before giving you this presentation.”

Say that again? The SEC says what? I’ve given hundreds of presentations in my 30 years in the business and know the SEC doesn’t require any information on who gets a free meal.

The staff walked around the room to ensure everyone was filling in their personal contact information, listing their financial concerns in retirement, and scheduling a time to meet face-to-face. The form even suggested concerns like running out of money, inflation, government debt, taxes, and healthcare. It was a prep for what was coming next.

The delicious main course was served only after everyone in the room turned in their form. I had already provided my name and phone number, so I gave that information again but didn’t provide any other information. No one came back and asked us to leave.

The presentation began after the main course. Dessert would have to wait – darn! The adviser started talking about his life, how his father had passed away several years ago, and his widowed mother was taken to the cleaners by an adviser in 2007. He claimed she was investing in a “risky” portfolio that held 60 percent in stocks and 40 percent bonds, which was entirely inappropriate for his 61-year old mother who needed absolute safety. He added, “Advisers are foolishly taught to put every retiree into a 60 percent stock and 40 percent bond portfolio.” Lie #2.

He continued, “I fixed her portfolio and put her in safer investments, and she got back all her money in four years. Now she is happy and living her dream with her grandchildren.” A red light came on in my head – the numbers don’t add up.  How could any portfolio gain 67 percent in four years without taking a sizeable risk? That’s the return needed to recoup a 40 percent loss. He didn’t put his mother in safe investments. Lie #3.

Social Security was next, “Why do those people at Social Security want you to delay taking benefits until age 70?” About five people in the room spoke up and said because that’s how you maximize your benefits. Wrong. “The real reason is they don’t want you taking money out of the system because they know there isn’t going to be any money left if people take it earlier.” Lie #4.

Then came inflation. “Do you remember your first mortgage at 12 percent?” Someone in the back put fuel in the fire by shouting 17 percent! “That’s right, 17 percent. And you know why? Inflation! We are VERY LUCKY inflation has been so low. Do you think it’s going to last? How are you going to be able to afford to live?”

He then rolls right into healthcare. “How are you going to be able to afford a nursing home? And what if the stock market crashes at the same time? You need to protect your retirement portfolio. We have software that will show you where the risks are.”

Last was taxes. “You’ll have to pay income tax on the money you take out of your IRA account, but taxes haven’t been this low in 50 years. In 2026, current tax rates sunset and higher tax rates are coming back unless Congress stops it. I’ll show you how you can take your IRA money now at a low tax rate, create guaranteed income with it, and then your family gets the tax money back when you pass.” He said nothing about the 6 to 10 percent commission he would earn if anyone in the room were gullible enough to pay up to 35 percent in federal taxes and then buy his insurance products.

I have a lot of experience working with many endowments. They don’t put one-third of their money in safe income-producing investments like guaranteed insurance products. Lie #5.

The presentation ended with another widow grandma story. An older woman came to his office last summer but chose not to invest. He claims she came back this January, devastated by what had happened, “The woman lost 18 percent of her money in the 3rd and 4th quarters of 2018. She had to cancel a vacation to Costa Rica in the fall and couldn’t afford to fly to her grandchildren at Christmas time.”

Red lights went off everywhere in my head. The stock market went up in the 3rd quarter of 2018 and hit an all-time high. No Costa Rica trip would have been canceled for this excellent performance. There was a sell-off in the 4th quarter, causing prices to bottom the day before Christmas. However, if this woman was flying to her grandchildren for Christmas, wouldn’t she already be there or on the way? Last, by the time the alleged disturbing second visit took place, stock prices had rebounded and made back more than half the loss. So, why would she be in the office saying her finances were ruined? My bet is this story never happened.

I looked up the adviser’s regulatory filing to find out how he gets paid. He charges financial planning fees, money management fees, commissions for insurance, and there is even an incentive arrangement where he takes 2 percent per year in fees plus 20 percent of client profits. I figure a retiree with a single $1 million IRA account would create at least $25,000 in adviser revenue the first year and at least $15,000 per year after that, and this is after paying the IRS for unnecessary IRA distributions. That money could be better spent doing things that make us happy, like getting the family together.

Let me sum up what I heard this adviser say: Be very afraid. Advisers manage money badly, Social Security people lie to you, the stock market is risky, inflation is around the corner, healthcare costs will kill you, and taxes are going up. Last, if you’re a grandma, you had better schedule an appointment now or you may never see your grandchildren again.

Retirees do need financial protection — from advisers like this.

RICK FERRI runs Ferri Investment Solutions, a pay-by-the-hour financial advice service, and is based near Austin, Texas. You can follow him on Twitter @Rick_Ferri.

Going to one of these “free food” events yourself? TEBI would love to hear your experiences. Remember, take any advice you’re given with a sizeable pinch of salt… and don’t forget to lick your plate. 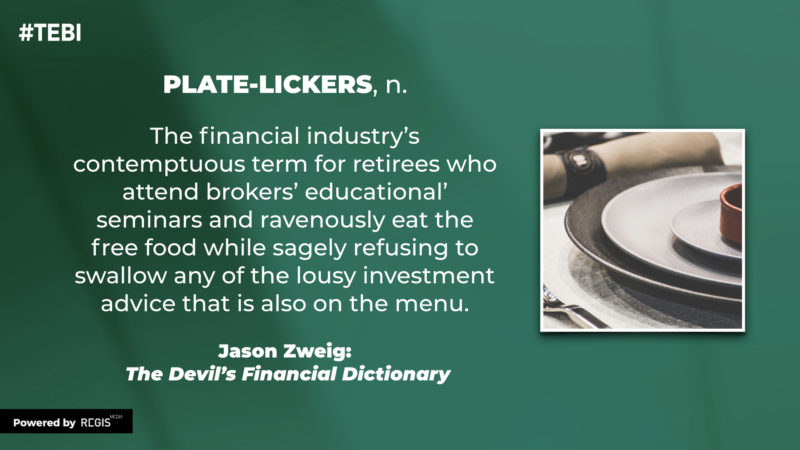 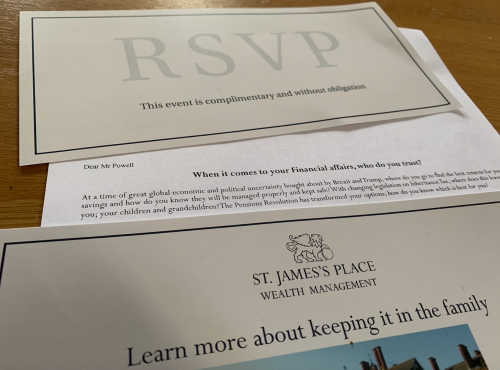 The problem with SJP

A letter landed on my doormat the other day from St James’s Place Wealth Management. “At a...