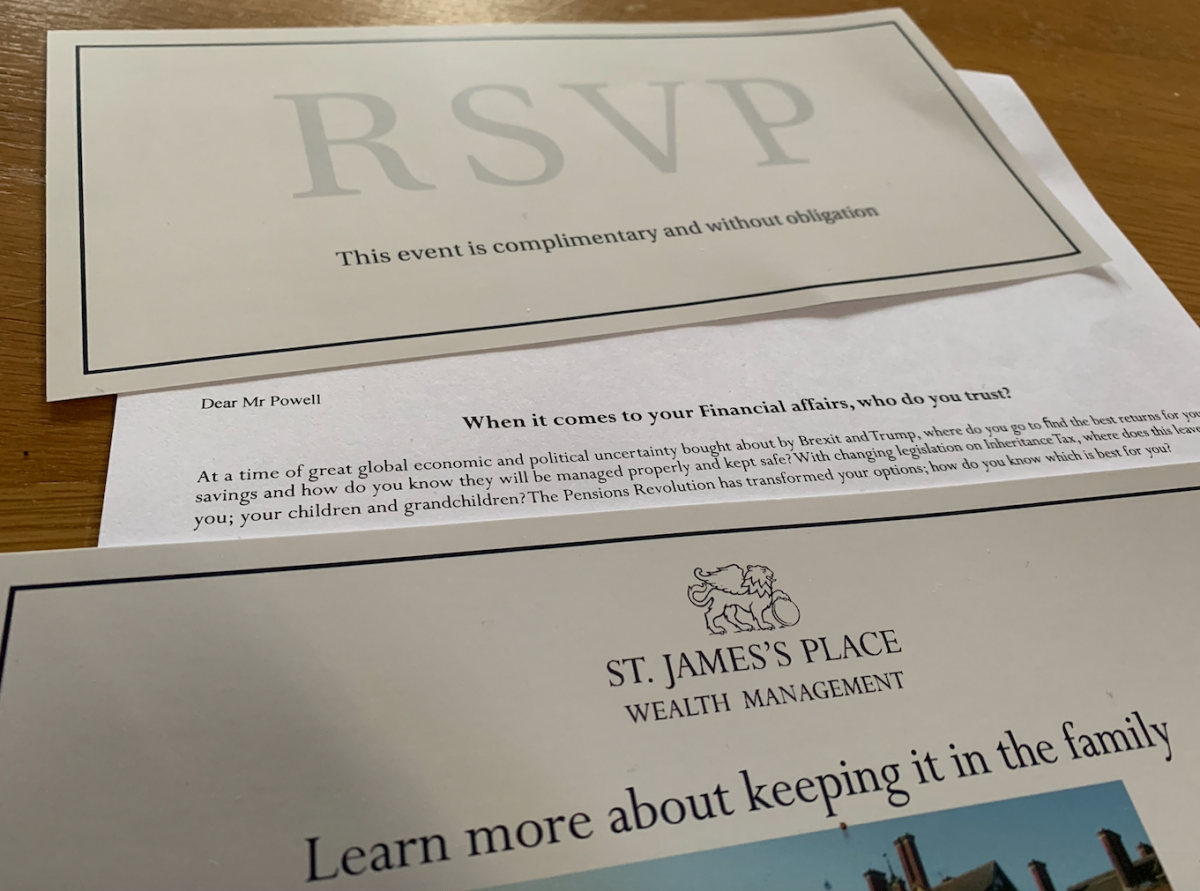 A letter landed on my doormat the other day from St James’s Place Wealth Management.

“At a time of great global and political uncertainty,” the letter began, “bought (sic) about by Brexit and Trump, where do you go to find the best returns for your savings and how do you know they will be managed properly and kept safe?”

Along with the letter came an invitation to a “complimentary” event at a local country hotel, where I could “learn more about keeping it in the family”.

Judging by the SJP’s extraordinary success — it is Britain’s largest and most successful restricted advice business — I’m guessing that a large number of people who receive these direct mail shots agree to go along.

But for anyone who knows about SJP’s charging structure, and the devastating impact that compounding costs can have on long-term net returns, firms like these are about the last people you would want to entrust with your hard-earned life savings.

Great business, shame about the VFM

Don’t get me wrong. I hugely admire St James’s Place as a business. Its impressive branding and marketing leaves most of its rivals in the shade. I’m told, as well, their advisers are generally friendly and agreeable. Yet while these personal characteristics are ideal for salespeople, they don’t necessarily make for good financial advisers.

The investment research firm Yodelar has just released a review of SJP’s value proposition, which highlights the very high charges its customers pay and the dismal performance of SJP’s funds. First things first: I have little knowledge of Yodelar, and I don’t know how robust its data analysis is. But the key findings of the report are these:

— Initial advice costs between 5 and 6% of your initial investment, compared to a UK industry average of 2.06%.

— Fewer than 2% of SJP funds have maintained top-quartile performance over the past one, three and five years.

— 80% of SJP’s funds have performed worse than the sector average over the last five years.

Expressed as percentages, these fees seem relatively insignificant. What investors need to understand, however, is that, over time, all of these little numbers combined will claim a massive chunk of their potential returns. As my fellow Brummie, the US chat show host John Oliver once put it, investors should “think of fees like termites. They’re tiny, barely noticeable, and they can eat away your f—ing future.”*

Warren Buffett touched on this same subject in his latest letter to Berkshire Hathaway shareholders. Paying just one per cent in costs, he explained, can halve the value of your investments over the very long term. When all the different fees and charges are added up, the total cost of investing for clients of SJP comes to several times that amount.

Yodelar isn’t the only organisation to raise concerns about the value for money provided by St James’s Place. In 2017, the consumer watchdog Which? found that some SJP advisers misled their clients, exaggerating investment performance and failing to disclose fees and charges. Sky News and The Sunday Times have both reported on a perceived lack of transparency.

I don’t want to single out SJP for criticism. There are hundreds of firms in the UK investing industry whose products and services are effectively priced to fail. It’s not because they’re bad businesses, nor that bad people run them or work for them. It’s that the interests of the client and those of staff and shareholders are fundamentally misaligned.

There are, thankfully, a growing number of advisers, in Britain and elsewhere, who want nothing more to do with the traditional asset management business model. They don’t want to be salespeople. They give advice that is genuinely in your best interests. And when they talk about keeping your money in the family, they really do mean your family and not theirs.

A good financial adviser who truly has your interests at heart is the most important link in the asset management value chain. If you don’t yet have one, you should look into the benefits of working with one. But, whatever you do, choose your adviser carefully.

You can read the Yodelar report here:

*If you haven’t yet seen John Oliver’s frightening but hilarious explanation of the impact of fees on net returns on HBO’s Last Week Tonight from June 2016, do watch it. There’s nothing funny at all about what’s happening here, but humour can be a very effective way of conveying a serious and important message.