Hedge funds collectively manage about $3 trillion and form an integral part of the portfolios of pension funds, sovereign wealth funds and university endowments. Unfortunately, the performance of hedge funds over the decade ending 2019 was abysmal. As you can see in the following table, their aggregate performance was so bad that, in returning just 1.1 percent per year, they managed to underperform every major asset class with the exception of virtually riskless one-year Treasuries, which they outperformed by just 0.3 percent. 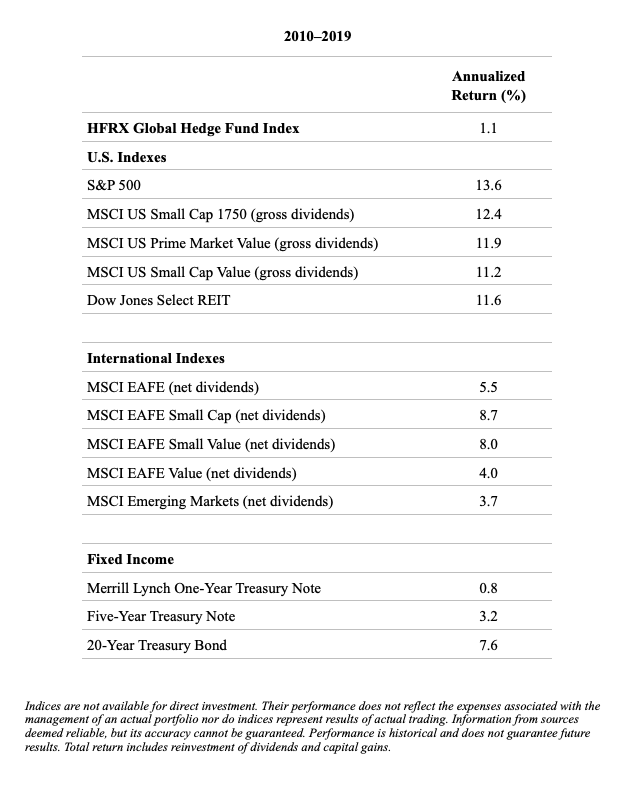 A major contributor to the underperformance is their high fees. Those fees typically include not only a 2 percent expense ratio, but performance-based fees that are typically 20 percent of returns. Unfortunately, those fees can often be just the proverbial tip of the iceberg, as hedge funds often tack on additional charges for such items as administrative fees that cover expenses for accounting services, trader bonuses, operating expenses and so on. A study by LJH Global Investments, a firm in Naples, Florida, that advises hedge fund investors, found that for about a hundred hedge funds, the average bill for “other” expenses was 1.95 percent.

The impact of performance fees

Itzhak Ben-David, Justin Birru and Andrea Rossi contribute to the literature on hedge funds with their June 2020 study The Performance of Hedge Fund Performance Fees. They began by noting that “one of the tenets of modern economics is that agency conflicts can be mitigated by implementing compensation contracts that align the agent’s interests with those of the principal. Hedge fund fees are considered a prime example of such a pay-for-performance compensation structure, as contract features are appealing to both managers and investors. Managers receive a fraction — often 20% of the gains earned. And investors are typically protected by provisions meant to ensure they pay incentive fees only on profits that exceed a predetermined benchmark, which often includes the previous highest portfolio valuation (high- water mark) and sometimes a hurdle rate.” The performance-based nature of the fee structure may align interests (though the asymmetric sharing of risks, with hedge funds sharing in the gains but not the losses, may lead to excessive risk-taking) and incentivise effort.

While that may be the case in theory, Ben-David, Birru and Rossi sought to answer the question: How do incentive fees fare in practice? Their sample combined data from the BarclayHedge database and the Lipper Trading Advisor Selection System database and covered the 22-year period 1995-2016. There were 80 funds at the beginning of the sample and about 1,500 funds at the end. Here is a summary of their findings:

— Due to the asymmetric risk structure, investors paid 49.6% of their aggregate gross profits as incentive fees compared to the average contractual incentive fee of 19.0%.

— There was a considerable disconnect between returns generated and incentive fees earned across all but the worst-performing 5% of funds.

— Management fees amounted to 1.51% of aggregate assets under management (AUM) per year. Incentive fees added an additional 1.93%. Of the latter fees, only 0.74% were justified by the amount of aggregate gross profits actually earned by investors over the full life of investments. The remaining 1.19% paid for gains that were offset by losses.

— After including management fees, investors collected only about 36 cents for each dollar of gross excess return generated by funds on their invested capital. The other 64 cents were paid as management and incentive fees.

— The bottom 45% of funds failed to deliver net lifetime returns higher than the risk-free rate and often produced substantial losses.

— Investors in graveyard funds paid a ratio of fees to gross excess returns of 118%.

— The effective cumulative fee rate has been trending up over time and tends to increase sharply after periods of poor performance. For example, during 2008 and 2009, cumulative fees comprised 259.5% and 94.1% of gross excess returns, respectively.

The true cost of membership of the hedge fund club

To determine the scale of the economic impact of hedge fund fees, the authors calculated that between 1995 and 2016 investors earned $228.2 billion in aggregate gross profits on their hedge fund investments. They also paid $113.3 billion in incentive fees. That is $69.8 billion more than the amount they would have paid if the compensation structure had been completely symmetrical. Extrapolating these figures from their sample to the total universe of funds that report hedge fund data, they found that investors paid almost $200 billion more than they would have paid if incentive fees had been symmetrical.

Highlighting the problem of asymmetric risks, the authors noted: “The lack of cross-fund performance netting also gives hedge funds an incentive to offer multiple investment strategies using separate vehicles (i.e., become fund families) rather than consolidating them into a single fund.” In other words, while incentive fees are supposed to address agency risk issues, they can actually increase them.

Ben-David, Birru and Rossi also noted the “protection” offered by the high watermark (no incentive fees can be charged until losses are recovered) in most cases doesn’t exist in practice because hedge funds that are underwater have the incentive to discontinue their efforts, shutting down funds. They noted the high attrition rate of hedge funds: “Of the 5,917 funds that are in our sample, only 1,217 are live at the end of the sample, with the remaining 80% of funds being in the graveyard.”

They added: “Moreover, if the liquidating fund earned incentive fees at some point in its life, then the act of liquidation leads to the crystallisation of ‘underwater incentive fees’, i.e., fees paid for past gross profits that have been offset by subsequent same-fund losses.” The problem is magnified by the return chasing behavior of investors—funds experience larger outflows following losses. They concluded: “Therefore, outflows will often occur precisely when investors have accrued fee credits and when previous incentive fees paid have gone underwater.”

Ben-David, Birru and Rossi also noted that their estimate of the true impact of performance fees is conservative, as they assumed that all funds have a full clawback clause for incentive fees within each calendar year. They added: “However, anecdotal evidence suggests that, historically, funds collected incentive fees more frequently, e.g., semiannually or quarterly.” Thus, their estimates should be viewed as a lower bound of the fees collected by hedge funds.

Their findings led Ben-David, Birru and Rossi to conclude: “There is a substantial disconnect between lifetime performance and incentive fees earned. These poor outcomes stem from the asymmetry of the performance contract, investors’ return-chasing behavior, and underwater fund closures.” They added that the evidence “suggests that the prevailing hedge fund compensation structure fails to protect investors from paying fees to fund managers that perform poorly in the long run. In fact, there exists a sizeable disconnect between long-term fund performance and lifetime fees earned. This disconnect is in stark contrast with the ‘promise’ of the prevalent hedge fund compensation contract that only outperforming managers will be rewarded with substantial fees.”

Ben-David, Birru and Rossi demonstrated that the hedge fund industry’s standard incentive contract has significant and misunderstood consequences. First, they demonstrated that the expected incentive fee on a diversified portfolio of hedge funds is materially higher than the contractual fee rate. In fact, more than half of the profits that the subset of profitable hedge funds have generated have been offset by losses—subsequent losses experienced by those funds and losses of other funds. An important contributing factor accounting for this is that investors cannot offset gains and losses across funds. Another is that entry and exit decisions of investors and managers are path-dependent and tend to undermine the effectiveness of high watermark provisions by destroying fee credits. Second, they found a lack of a clear relation between incentive fees and performance. Third, they found no clear relationship between management fees and performance.

A particularly compelling data point demonstrating the asymmetric nature of performance fees is that by the end of 2008 the hedge fund industry had generated cumulative gross losses of $1.3 billion, yet it had earned cumulative incentive fees of nearly $51.9 billion. It’s great being the croupier!

The bottom line is that the hedge fund industry has been destroying returns for over a decade. The results beg the questions: Given such poor returns, along with exorbitant fees, why is there still about $3 trillion invested in hedge funds? And why is there not a rebellion against performance incentive fees that have asymmetric risks? Surely these are among the biggest anomalies in finance. They can only be explained as the triumph of hype and hope over wisdom and experience.