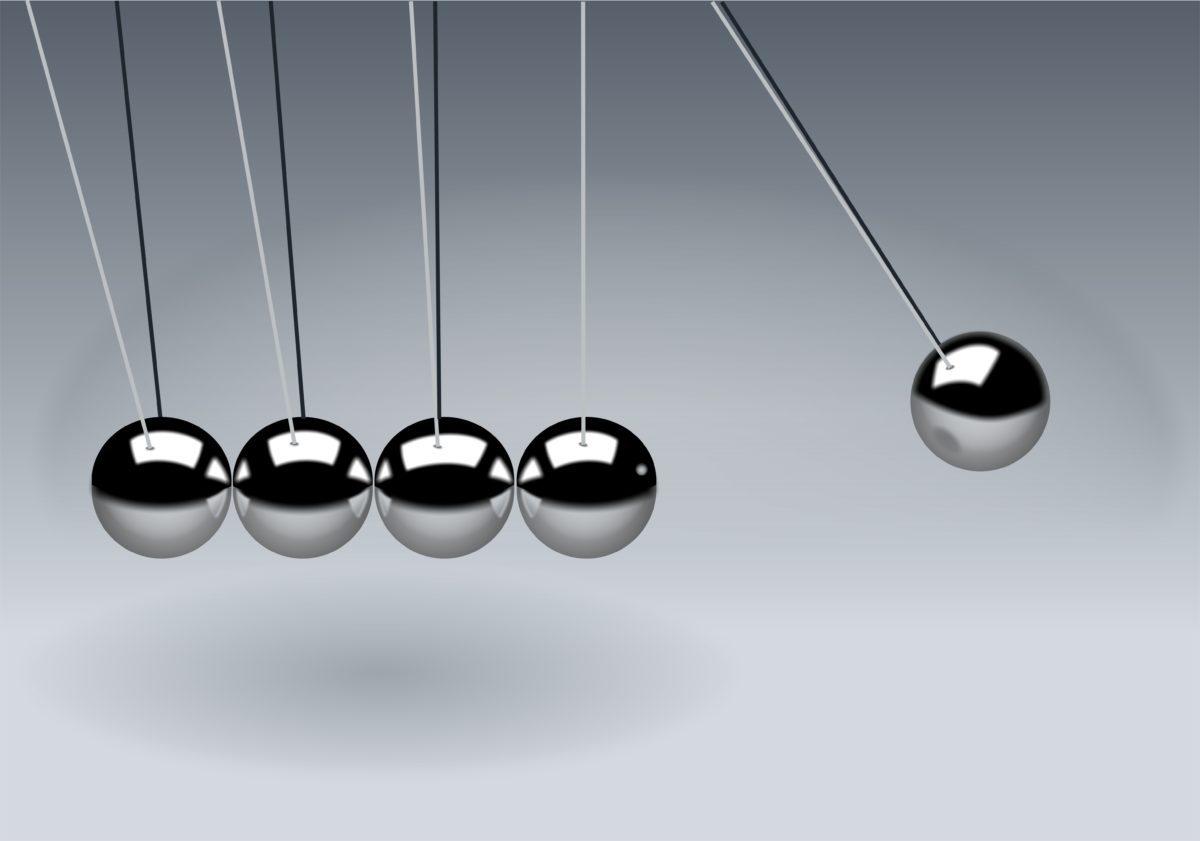 If I had a nickel for every time I’ve heard someone say that market-cap weighting is a momentum strategy because investors in cap-weighted index funds “buy more of the biggest stocks as their price goes up,” I’d be writing a FIRE (Financially Independent Retire Early) lifestyle blog right now. Alas.

This argument has curb appeal. But is it right? Are investors in cap-weighted index funds just riding momentum?

At the risk of oversimplifying, the market is… well, the market. A market-cap-weighted index fund that captures a significant majority of the investable market cap of its target market, such as Vanguard Total Stock Market ETF (VTI), has no inherent biases. It captures virtually every U.S.-listed stock and weights them based on their free-float-adjusted market cap. Its movements are driven by investors’ collective opinion of the worth of its constituents. Sometimes we, as a group, get the price “right”—for a fleeting moment. More often, we get it wrong—as markets spend most of their time on one side or another of fair value, though it’s hard to recognise where prices are relative to that mark in real time.

The claim that market-cap weighting is a momentum strategy gathers steam as markets rally. Ten-plus years into the current bull market, it has a full head of steam. Proponents point to rising levels of concentration within cap-weighted indexes and the degree to which a small handful of sectors and names have driven the market’s gains as evidence.

Exhibit 1 shows the percentage of total assets in Vanguard Total Stock Market Index (VITSX) that was invested in its top 10 holdings from the time the fund’s Institutional share class incepted in September 1997 through the end of 2019. The level of portfolio concentration for this cap-weighted index fund clearly ebbs and flows with the market’s performance. The amount of assets invested in the fund’s top 10 holdings has averaged roughly 16.5% since the Institutional share class’ inception. It peaked just shy of 22% (nearly 3 standard deviations above its since-inception average) at the height of the tech bubble and most recently clocked in at nearly 19% (1.25 standard deviations higher than its since-inception average). 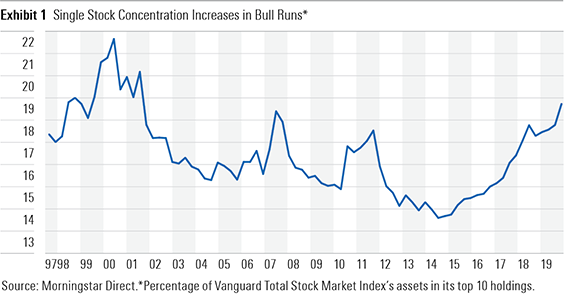 Exhibit 2 measures portfolio concentration through the lens of GICS sector exposure. It shows the evolution of the Vanguard fund’s sector allocations since 1997. At the height of the tech bubble, the fund had nearly 37% of its assets in tech stocks. In the run-up to the global financial crisis, its allocations to financials and energy stocks both crested. The subsequent wreckage experienced in each of these sectors is pointed to as further evidence of cap-weighted indexes’ momentum-following tendencies. 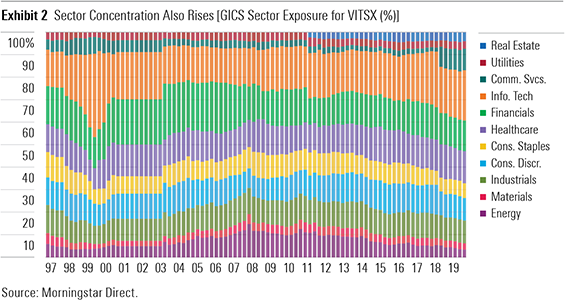 Exhibit 3 provides a more granular example of how just a handful of sectors and stocks tend to do most of the heavy lifting in bull markets. The table shows the percentage contribution to the post-financial-crisis performance of iShares Core S&P 500 ETF (IVV) from the top five GICS sectors and top 10 stocks. The tech sector accounted for one fourth of the fund’s gains from March 2009 through the end of 2019, and Apple (AAPL) alone represented 6.3% of a decade-plus worth of returns. 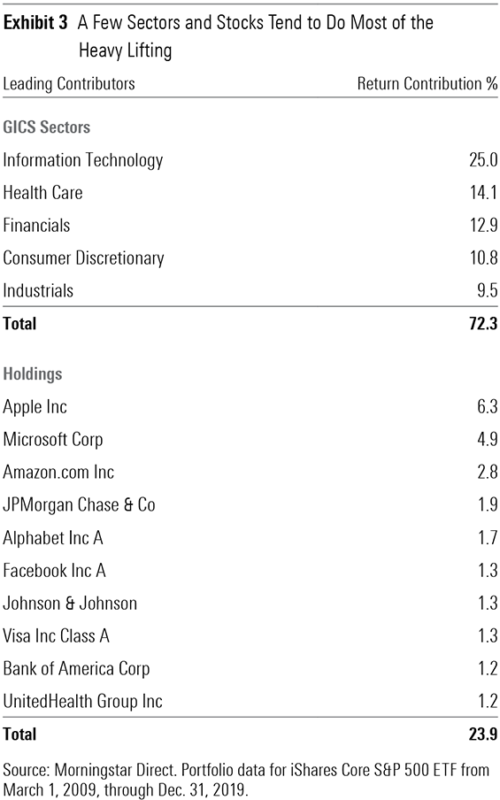 Is this an open-and-shut case for the “cap weighting is a momentum strategy” crowd? The facts are the facts. As bull markets run, cap-weighted indexes tend to become more concentrated in a handful of sectors and stocks. These same sectors and stocks tend to account for a disproportionate amount of the market’s gains. But these are features of market-cap weighting, not bugs. And they’re certainly not indisputable evidence that market-cap weighting is a momentum strategy — at least not in the traditional sense.

Whether or not market-cap weighting captures momentum depends in part on how you define momentum. Few would argue that markets don’t experience momentum. But that doesn’t mean that the market itself is a momentum strategy.

The most common measures of momentum anchor on price changes. They look for the stocks whose prices have been going up (or down) the fastest. The most widely accepted measure of momentum in academia looks at returns over the past 12 months, excluding the most recent month (because returns over the past month have a tendency to reverse over the next month). The academic momentum factor (MOM) goes long those stocks showing the strongest positive momentum and shorts those showing the strongest negative information.

Exhibit 4 contains the results of a handful of regression analyses I ran to assess whether the market, proxied by Vanguard Total Stock Market Index, exhibits any evidence of exposure to the academic momentum factor. The first row represents the regression results for the period from January 2003 through December 2019 using the standard academic definitions of the market, size, value, and momentum. As you can see (and as I said before), the market is the market. This regression shows that the Vanguard fund showed no significant exposure to any of these non-market factors during this period. Of course, I’ve regressed a market proxy against the market itself here, so the result is unsurprising.

But what if we define the market differently? The second and fourth rows of Exhibit 4 contain the results for a pair of regressions where I swapped in a pair of different market measures: the MSCI All Country World Index and the S&P 500 Equal Weighted Index. Using the former can give us a sense of whether the U.S. market has shown momentum versus the broader global stock market. The latter can tell us something about whether weighting stocks by market cap introduces a momentum tilt. The regression result using the ACWI as a market proxy shows a touch of momentum in the mix, though it is statistically insignificant. The regression that uses the equal-weighted S&P 500 as a market measure shows a modest and statistically significant loading to momentum, perhaps lending some credence to the argument that market-cap weighting is a closet momentum strategy.

These regression results will vary across time periods. The third and fifth rows in Exhibit 4 show the Vanguard fund’s factor loadings as measured against the ACWI and equal-weighted indexes, respectively, from the market’s post-crisis trough through the end of 2019. In this case, both regressions show a statistically significant loading to the standard momentum factor.

Does this further bolster the notion that market-cap weighting is a momentum strategy? Maybe. There’s no changing the fact that the two are definitionally different. The market is the market. Momentum strategies own a smaller subset of the market, weight stocks by measures other than price, and turn over far more frequently. As you can see in the final row of Exhibit 4, a more-focused momentum strategy (as represented here by the MSCI USA Momentum Index) will likely show a far greater weighting to the standard momentum factor. Aside from definitional differences, there are more fundamental questions about momentum that need to be addressed before reaching a verdict.

More recent research on momentum has linked the phenomenon to fundamentals. In a 2015 research paper, Robert Novy-Marx uncovers the explanatory power of earnings momentum, as proxied by earnings surprises. [1] He concludes, “After controlling for fundamentals, past performance does not provide significant additional information regarding expected returns. Fundamentally, momentum is fundamental momentum.” 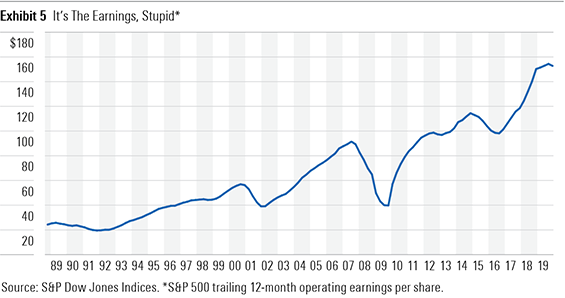 Market-cap weighting is a form of momentum strategy — just not in the way that many think. Under certain circumstances, a cap-weighted index can show slight loadings to the standard academic definition of price momentum, but that’s insufficient evidence. The case becomes much stronger when we link the manner in which market-cap-weighted indexes evolve over a market cycle back to fundamentals. In my opinion, fundamentally, market-cap weighting is, more intuitively, a means of leveraging fundamental momentum.

Ben Johnson is director of global exchange-traded fund research for Morningstar. For more insights from Morningstar, take a look at a few more of the recent articles below:

Active versus passive in Europe is no contest