It’s been a bad month for high-profile fund managers. Here in the UK we are witnessing the meltdown of the man once dubbed Britain’s Warren Buffett, Neil Woodford. Meanwhile, across the pond, one of America’s best known stock pickers, Ken Fisher, is having a PR nightmare of his own.

Fisher, whose personal wealth is estimated at around $3.8 billion, runs Fisher Investments, one of the world’s most successful asset management companies. But he courted controversy two weeks ago by making disparaging remarks about women at an industry event. Since then, unsavoury tweets about sex and slavery have come to light. Former employees have also complained about the work culture at his firm.

As a result, some of Fisher’s biggest clients have taken their custom elsewhere. New Hampshire has become the third state to take its money out of Fisher Funds, following similar moves by the Michigan and Iowa state pensions, and by the Board of Pensions at the City of Philadelphia. Fidelity has also terminated contracts it had with him.

Fisher’s comments, and his admission that he has said similar things many times before, have raised personal questions about his personal character. But, for me, an even more important question is this: Why do so many investors, including big institutions, put their faith in him? Even after recent withdrawals, the firm still manages a staggering $110 billion of other people’s money.

I’ve done some digging around over the past couple of days and this is what I’ve found.

Fisher Funds was founded in the US in 1979, but Fisher has also operated in the UK and several other European countries for many years.

People familiar with the working environment at Fisher Investments UK tell me the overriding emphasis is on sales. Employees tend to be young — for many it’s their first job out of university — and staff turnover is relatively high.

The company’s online presence is huge. It has a brilliant content marketing strategy and a vast online advertising budget, enabling it to deliver leads on an almost industrial scale. As a content strategist myself, I’m in awe of what the firm has achieved.

Leads are contacted by telephone, with the aim of setting up face-to-face meetings. Staff are encouraged to emphasise Ken Fisher’s market-beating expertise, his high-conviction investment style and, more than anything, his ability to spot bear markets before they actually happen.

This certainly chimes with what Fisher has said in public. To say that he’s a strong proponent of active money management is an understatement. I’ll never forget an article he wrote in the FT five years ago in which he referred to those (like me) who question the value of active management as “deliverers of drivel… communists at heart, (who) disbelieve in markets and will surely rot in hell.” Credit where its due, he doesn’t shy away of saying what he thinks.

But does Fisher’s record actually match his claims? Is he really an expert and picking stocks and timing the market? Has he delivered better returns for his clients than they would have received if they’d simply invested in low-cost index funds?

The figures are hard to find

As I mentioned, there’s a plenty of content online about Ken Fisher and his funds. Nevertheless, it’s not at all easy to find out how Fisher has performed from an investment point of view. It took me several hours to ascertain that Fisher’s investment vehicle in the UK is called the Purisima Global Total Return in Europe OEIC, which stands for open-ended investment company.

What’s interesting, looking through the fund prospectus, is how hard it is find any reference to Fisher. In fact there are three of them, in 57 pages. Here’s one, confirming that the fund is indeed managed by Fisher Funds.

So, how has the fund actually performed?

Well, it opened in June 2002 and, within a few weeks, lost 32% of its value. If Ken Fisher is indeed able to protect clients’ money by anticipating bear markets, it certainly didn’t work on that occasion.

What about the global financial crisis? Did Ken Fisher see that coming?

Again, the evidence suggests he was taken by surprise as much as anyone. 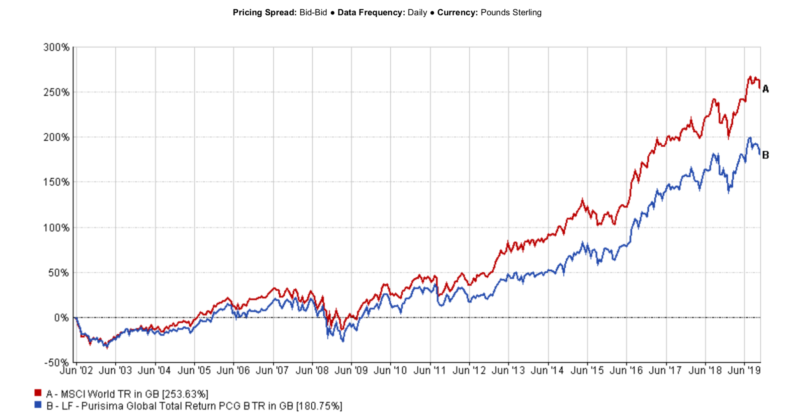 To my untrained eye, the Purisima fund doesn’t look anything like a high-conviction active fund. It looks, on the contrary, like a fund that bears a remarkable resemblance to the index itself.

In other words, investors might as well have chosen a simple index tracker, which would have been very much cheaper. The Purisma fund has an annual management charge of 1.5%. You can now buy a comparable index fund for about a tenth of the price.

And what about the return the fund delivered? Over the 17 years and three months it has so far been in existence, the Purisima fund has returned 180.75%. The MSCI World Index has returned 253.63%. To put in another way, Fisher hasn’t just been beaten by the market; he’s been absolutely thrashed by it.

Look, I’m not a statistician, or even a financial professional. I’m a humble journalist. And I’ve only looked at Fisher’s performance in the UK, not elsewhere. I’d love to hear from anyone who interprets this data differently. And, if I’m wrong, I will happily publish a correction.

But the evidence looks pretty categorical to me. Ken Fisher is a first-rate marketer and businessman. But, as a money manager, he emphatically hasn’t shown sufficient skill to warrant paying to invest with him over a low-cost index fund.

No one said investing was going to be easy

I’m often asked whether people actually need to use a financial adviser. The simple answer, strictly speaking, is... 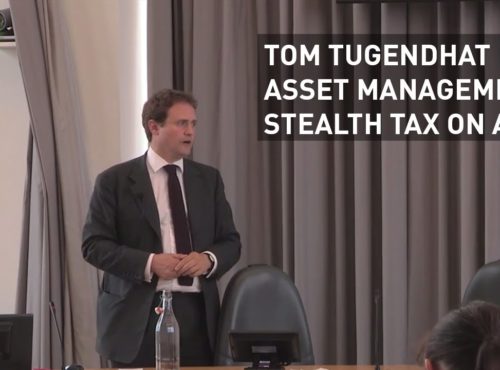 Tugendhat: Asset management fees are a stealth tax on all of us

Advocates of indexing like myself have been given all sorts of labels over the years, but the one...