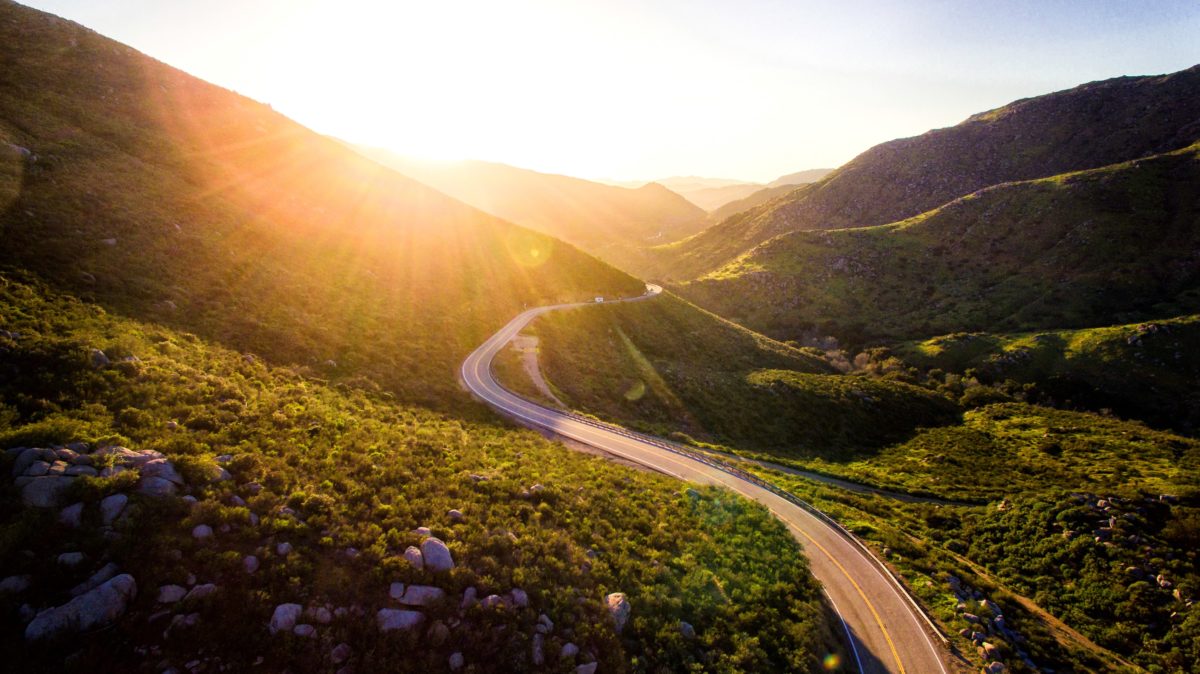 It’s been an eventful few days on global stock markets. There will doubtless be more drama to come in the coming days, weeks and months. This is certainly a time to stay calm.

I wrote the other day about three questions to ask yourself if you’re anxious about the impact of recent volatility. Jonathan Clements has also reminded us not to stress about things we have no control over.

One other article I’ve read on the subject that I felt really hit the spot is the following piece from our friend The Investor at Monevator. It is republished here with their kind permission.

Feels like only a couple of weeks ago I was reminding everyone via Weekend Reading that shares can go down as well as up.

Actually that’s because it was on a couple of weeks ago. Twice.

I needn’t have bothered. The past ten days – and most especially the past week – has provided an exhilarating reminder that stock markets can fall faster than you can say “no, for the hundredth time, UK government bonds are not riskier than shares.”

Indeed this has been the fastest decline from a high for the US stock market of all-time. UK shares are down 11% for the week, too, and the average UK pension fund has lost a whopping 5% to 6% of its value since Monday. Put that into your SWR calculator and smoke it.

Things were definitely feeling freaky by the fourth day of 3-4% declines. When the US market bounced higher into the close on Friday – perhaps on the expectation that central banks will make some sort of statement about interest rate cuts this weekend – you could almost feel the relief, even though all the main indices still ended the day in the red.

UK government bonds, for the record, are up.

Just in case you’ve been living in a bunker – which is where we’ll all be in a few weeks, according to some – the cause is the novel coronavirus. COVID-19, as we groupies have started to call it.

This pesky not-quite-a-critter has been causing traders to second-guess their portfolios since it came onto the radar early this year. Only a few weeks ago I spoke with The Accumulator and revealed that I’d moved to my largest ever cash position in my portfolio, naughty active trader that I am. But in case that sounds clever, know that I’d halved this horde by the middle of the month when I saw the log graph of Chinese infections flattening out and thought, like many, that the end was possibly in sight.

Below are two resources I’ve been glued to for weeks. You can take what you want out of the data they present — squint and it’s still possible to be optimistic — but for me that’s the beauty of them. Just the facts, ma’am:

I’ll keep checking in with those sites, but I suspect we’re in new phase now.

Everything changed for me (and many others, it seems, given the market sell-off) when it became clear that Italy had a major outbreak on its hands, almost overnight.

Italians are a warm, sociable, and tactile people with a beautiful country that people like to visit. I felt it was potentially game over for containment after that.

I won’t bore you with too much of my pound-shop epidemiology. Suffice to say I have come to see the logic behind medical views like this:

Lipsitch predicts that within the coming year, some 40 to 70 percent of people around the world will be infected with the virus that causes COVID-19. But, he clarifies emphatically, this does not mean that all will have severe illnesses.

“It’s likely that many will have mild disease, or may be asymptomatic,” he said.

As with influenza, which is often life-threatening to people with chronic health conditions and of older age, most cases pass without medical care. (Overall, about 14 percent of people with influenza have no symptoms.)

The whole article is worth a read if you want to know more lore about COVID-19.

Perhaps the coronavirus will be with us for a year or longer, until it burns itself out.

Three months ago it didn’t exist in humans.

What does this mean for the world, for its economy, and for the future earnings of companies?

Markets are not falling because teenage traders are scared witless of a bogeyman. This seems much bigger than SARS and much deadlier than swine flu. To my mind the declines are a rational response, as investors try to discount three aspects of this health scare:

Only a market actually has any hope of figuring this out, because it’s so darn complicated.

For example, people may think it’s a practical idea to close airports and send everyone home from work. But that would have a massive economic impact, with long-term consequences.

Tax receipts would be lower, for instance, and so spending on other deadlier illnesses stretched. The supply of food, drugs, and other essentials would be disrupted. You might kill hundreds of people out of sight in an effort to avoid a couple of hundred people catching COVID-19 and a dozen dying a month before they would have anyway.

This is a nasty virus and any death it causes is a tragedy for that person and their friends and families. We should take reasonable steps to slow it.

But look at who is most likeliest to be killed by the virus: 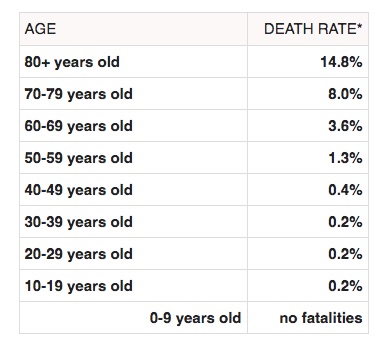 The blunt economic truth is many if not most of the small minority (c.2%) of infected people who may ultimately be killed by COVID-19 would probably have died of something else before too long, anyway2. It’s horrible to think in these terms, but this is exactly the sort of choice governments are forced to make when deciding how to respond.

It’s also what the market is trying to guesstimate. Actual deaths will probably not be too insanely disruptive in a strict economic sense, even if it becomes a pandemic. (Most of its victims aren’t working, and most of their consuming is done.) But trying to slow the rate of deaths could still cost global GDP at least a trillion dollars, according to one estimate by economists today. That’s a high price to pay for something that may not even be effective.

Singapore and China have seemingly had some success in containing the virus. However it’s hard to imagine Western populations following their protocols.

Slowing down the rate of transmission could get us to a vaccine with fewer COVID-19 deaths. That would be desirable, notwithstanding my earlier comments about unintended consequences.

But keep in mind this kind of virus mutates. So a vaccine may not be fully effective, and would probably need continual updating. Or it may arrive when the virus is close to extinguishing itself anyway, and ultimately be of little practical use.

To my mind then the market declines have been orderly and pretty logical, in the face of the potential disruption. Outside some extremely expensive-looking glamour stocks and some clearly threatened individual sectors (especially tourism), most markets have declined by about 10-12%. Sectors have similarly declined about 10-12%. Everything has de-rated a notch, in other words, mostly from high levels.

The market seems to be saying we’re all in this together. Not quite the spirit of Brexit Britain or Trump Towers, I understand, but probably true. So its best response is to knock a year or twos of profits off the spreadsheet and wait to see if there’s a reason to put them back on, or else to get more aggressive.

So much for the wisdom of crowds. What should individual investors do?

I can tell you what investors have been doing, which is trade. Retail investor favourites like investment trusts plunged on Friday morning before recovering as the day went on. And in the US, Friday saw the first ever $100 billion trading volume day in a single security – the S&P 500 ETF with the ticker SPY.

At least one UK broker/platform seems to have frozen with today’s torrent of selling and is currently unable to execute trades. 2008 vibes. Please don’t panic. There are bad scenarios but there are also many scenarios. Hopefully your diversification is working. Take a breath.

At least one UK broker/platform seems to have frozen with today’s torrent of selling and is currently unable to execute trades. 2008 vibes. Please don’t panic. There are bad scenarios but there are also many scenarios. Hopefully your diversification is working. Take a breath.

I understand it is easier said than done. Passive investing has delivered tremendous gains over the past decade, but when markets fall it can feel like you’ve set up your sun lounger in front of a combine harvester.

But weeks – or months or even years – like this are part of the deal when it comes to risk assets. We wouldn’t get those great returns without pain along the way, because if there was no pain then everyone would be at it and the gains would go away.

The COVID-19 pandemic has not just sparked a revolution in working from home. It has also triggered...

By JOACHIM KLEMENT   I recently wrote about the research of Henrik Bessembinder, who investigates the extreme...

By LARRY SWEDROE        There is one thing stronger than all the armies of the...