In a recent research paper entitled ‘How to increase the odds of owning the few stocks that drive returns‘, global asset manager Vanguard revealed a telling statistic. Between 1987 and 2017 just under half of the 3 000 largest stocks listed in the US delivered a negative return.

Over this 31 year period, 47.4% of companies in the Russell 3000 Index saw their share prices decline. Some of those went bankrupt, delivering a negative 100% return.

What’s more, the return of the median stock over these three decades was just 7%. In other words, if you picked the average stock, your return was insignificant.

This was over a period when the total return from the Russell 3000 Index was 2 100%. As the chart below illustrates, this performance was driven entirely by just 7.3% of stocks that returned over 1 000%. 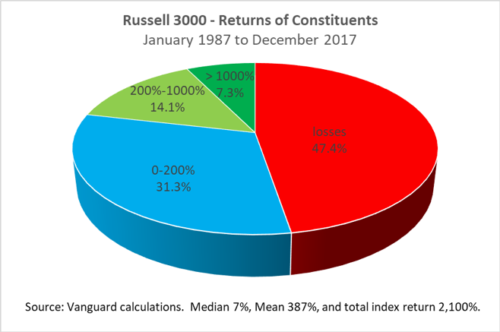 Needles in the haystack

Of course, this is something of an over-simplification. Just because a stock declined over a full 31 year period, doesn’t mean that it didn’t make significant gains in between.

For instance, Superdry’s share price may be 80% down from its 2018 peak, but an investor who bought the stock in mid-2012 and sold out of it before it collapsed could still have earned a return of 700% or more. It was, therefore, still possible to make a big return, even though Superdry’s performance since listing is ultimately negative.

However, the broad lesson holds – there is an extremely small pool of persistent winners in the stock market. An investor picking a share at random is far more likely to under-perform the market over the long term than to out-perform it, and has almost a 50% chance of losing money.

This illustrates how difficult it is to be a successful stock picker. There are very few companies that are going to deliver a long term out-performance. It may be possible to beat the market through buying and selling stocks like Superdry at the right time, but that comes with additional risk. If you get it wrong, the consequences can be severe.

Research from the National Bureau of Economic Research (NBER) in the USA also suggests that not only are the ‘winning’ companies rare, but they are becoming even more so. A 2016 paper entitled ‘Is the U.S, public corporation in trouble?‘ found that, on average, listed companies in the US have become larger, but they have also become less profitable.

Profitability is one of the key factors in share price returns, as investors are effectively buying a share of the company’s future earnings. The higher those earnings are likely to be, the more investors will be willing to pay.

What the NBER found, however, is that the profitability of the market as a whole is being driven by a smaller and smaller concentration of companies.

The growing concentration of not just earnings, but many measures of corporate strength amongst listed companies is illustrated in the table below:

Compare this against the table below, which shows how, on average, profitability has fallen significantly over this 40 year period:

“Though performance has worsened for the average firm, the winners have done very well,” the study points out. “One way to see this is that four new firms entered the list of the top five firms by market capitalisation in 2015, relative to 1995. Specifically, Apple, Google, Microsoft, and Amazon replace AT&T, Coca Cola, General Electric, and Merck. In 2015, these four firms combined had earnings of $82.3 billion, representing 10 percent of the earnings of all public firms combined.”

This shows just how small the pool of ‘winning’ stocks has become. Successfully identifying them beforehand would be extremely profitable, but it is also becoming more and more difficult to do.

If you’re interested in reading more of his work, here is his most recent article for TEBI:

What is the value that fund managers are selling?