The Shiller cyclically adjusted (for inflation) price-to-earnings ratio, referred to as the CAPE 10 because it averages the last 10 years’ earnings and adjusts them for inflation, is a metric used by many to determine whether the market is undervalued, fairly valued or overvalued. As of April 25, 2022, the CAPE 10 stood at 33.82, virtually double its historical mean of 16.94, leading many forecasters, such as Jeremy Grantham, to predict a severe market, calling it a “superbubble”,

Employing a ten-year average for earnings instead of the most current 12-month earnings was first suggested by legendary value investors Benjamin Graham and David Dodd. In their classic 1934 book Security Analysis, Graham and Dodd noted that traditionally reported price-to-earnings ratios can vary considerably because earnings are strongly influenced by the business cycle. To control for the cyclical effects, Graham and Dodd recommended dividing price by a multiyear average of earnings and suggested periods of five, seven or 10 years.

Then, in a 1988 paper, economists John Campbell and future Nobel Prize winner Robert Shiller, using a ten-year average, concluded that a long-term average does provide information in terms of future returns. This gave further credibility to the concept and led to the popular use of the CAPE 10. Providing further support for the CAPE 10, in his 2016 study Predicting Stock Market Returns Using the Shiller CAPE — An Improvement Towards Traditional Value Indicators?,  Norbert Keimling concluded that it was possible to forecast potential long-term returns in the S&P 500 for periods of more than 10 years (he examined periods of up to 15 years) using the CAPE 10 and that the relationship also existed internationally in 17 MSCI country indexes: “In all countries a relationship between fundamental valuation and subsequent long‐term returns can be observed.”

However, as Graham and Dodd noted, there’s really nothing special about using the 10-year average. Other time horizons also provide information on future returns. In his latest 2022 paper, Equity Risk Premiums (ERP): Determinants, Estimation, and Implications, Aswath Damodaran found that the best predictor of future equity returns is valuations—whether using measures such as the earnings yield (E/P) derived from the Shiller CAPE 10 or the current E/P — not historical returns. A review of the evidence led Damodaran to conclude: “Equity risk premiums can change quickly and by large amounts even in mature equity markets. Consequently, I have forsaken my practice of staying with a fixed equity risk premium for mature markets, and I now vary it year to year, and even on an intra-year basis, if conditions warrant.”

Why forecasts of returns are important

It is impossible to build an investment plan without estimating the returns to stocks (as well as to bonds and any alternative investments). One reason is that the estimate of returns determines your need to take risk—how high an allocation to equities and other risky assets you will need to reach your goal.

If your estimate is too high, it’s likely you won’t have sufficient assets to reach your retirement goal. If it’s too low, it could lead you to allocate more to equities, which means taking more risk than necessary. Alternatively, it could lead you to lower your goal, save more or plan on working longer.

Unfortunately, many mistakes are made when looking at the historical record of the CAPE 10 in terms of its forecasting accuracy. Perhaps the most common error is to consider the CAPE 10 not useful because there is much error in the forecast—the R-squared value is only about 40 percent.

In their 2017 paper The Many Colours of CAPE, Robert Shiller and Farouk Jivraj found that the CAPE 10 was a better predictor than any of the alternatives considered, and it provided valuable information. As you can see in the table below, they found that 10-year-forward average real returns dropped nearly monotonically as starting Shiller P/Es increased. They also found that as the starting Shiller CAPE 10 ratio increased, worst cases became worse and best cases became weaker. Additionally, they found that while the metric provided valuable insights, there were still very wide dispersions of returns. 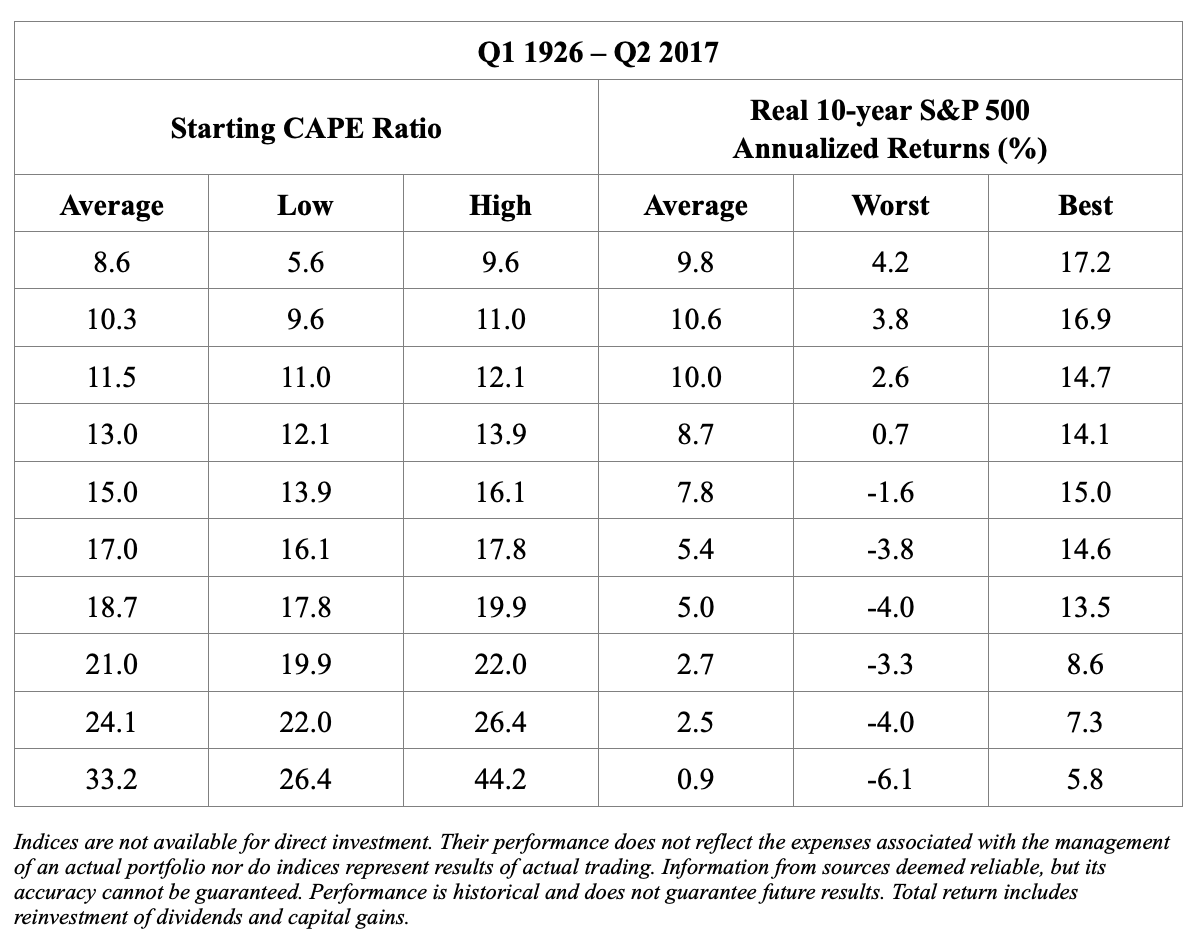 As tests of robustness, Shiller and Jivraj also found that the CAPE 10 had explanatory power for both sector and individual stock returns.

What can we learn from the preceding data? First, starting valuations clearly matter, and they matter a lot. Higher starting values mean that not only are future expected returns lower, but the best outcomes are lower and the worst outcomes are worse. The reverse is true as well—lower starting values mean that not only are future expected returns higher, but the best outcomes are higher and the worst outcomes are less poor. However, it’s also extremely important to understand that a wide dispersion of potential outcomes, for which we must prepare when developing an investment plan, still exists — high (low) starting valuations don’t necessarily result in poor (good) outcomes. In other words, investors should not think of a forecast as a single point estimate, but only as the mean of a wide potential dispersion of returns. The main reason for the wide dispersion, as Damodaran noted, is that risk premiums are time varying (if they were not, there would be no risk in investing!). It is the time-varying risk premium, what John Bogle called the “speculative return,” that leads to the wide dispersion in outcomes.

The fact that a wide dispersion of returns occurs around the mean forecast is why a Monte Carlo simulation is a valuable planning tool. While the input includes an estimated return, it also recognises the risks of that mean forecast not being achieved — which is why volatility is another input. Because most simulators allow you to examine thousands of alternative universes, they enable you to test the durability of your plan — you can see the odds of success (such as not running out of money or leaving an estate of a certain size) across various asset allocations and spending rates.

The time-varying risk premium is also why an investment plan should include a Plan B, a contingency plan that lists the actions to take if financial assets were to drop below a predetermined level. Actions might include remaining in, or returning to, the workforce, reducing current spending, reducing the financial goal, selling a home and/or moving to a location with a lower cost of living.

The bottom line is that 40 percent explanatory power provides significant information that investors can use to build plans. However, you must not make the mistake of overestimating the forecasting power of the CAPE 10 metric and treat that forecast as what will happen. Instead, it should be used to help determine your need to take risk and then, with the understanding that risk premiums are time varying and a wide dispersion of potential outcomes is likely, to help build a Plan B.

Another mistake investors make when criticising the use of the CAPE 10 is that it doesn’t work as a timing tool. You would think Grantham would have learned that, as he has been predicting a severe bear market as far back as 2013.

Timing the market using the CAPE 10

While valuations do provide information on future returns, the research has found that they do not provide information that allows investors to profitably time the market. For example, Cliff Asness, Swati Chandra, Antti Ilmanen and Ronen Israel, authors of the study Contrarian Factor Timing Is Deceptively Difficult, which appeared in the 2017 Special Issue of The Journal of Portfolio Management, found “lacklustre results” when investigating the impact of value timing (in other words, whether dynamic allocations can improve the performance of a diversified, multi-style portfolio). They wrote: “Strategic diversification turns out to be a tough benchmark to beat.”

Despite the evidence, many investors ignore the findings and try to use CAPE 10 valuations to time markets. They might shift from stocks to bonds when the CAPE 10 is above its long-term average, and shift from U.S. to international when international valuations are lower (as they have been for a number of years now). As we just discussed, this has not worked well. However, blaming the CAPE 10 for its failure as a timing tool is like blaming the fork for its failure as a useful tool to eat soup. It is not intended to be used to time markets, only to forecast mean expected returns. Consider the following example.

Using data from AQR Capital Management, as of the end of the first quarter 2022, the CAPE 10 earnings yield was 2.7 percent for the U.S., 5.1 percent for developed non-U.S. markets and 6.3 percent for emerging markets. Some investors take this to mean you should underweight U.S. stocks and overweight emerging markets. This is the wrong use of the CAPE 10 for the simple reason that doing so ignores risk. It’s the equivalent of saying junk bonds with higher yields are better investments than U.S. Treasury bonds with lower yields. The information provided is that investors believe international stocks are riskier, and thus they have higher expected (not guaranteed) returns as compensation for that risk. It’s important to always keep in mind that the efficiency of the markets means that all risky assets should have similar risk-adjusted returns. Thus, your starting point when determining your asset allocation should be the global market capitalisation, which is currently about one-half U.S., three-eighths developed non-U.S., and one-eighth emerging markets. Having set your asset allocation, you should stick with it, rebalancing as needed.

The bottom line is that the CAPE 10 does provide us with valuable information (as do other current valuation metrics). However, it’s important that the information be used in the right way, as misusing it can lead to bad outcomes and the failure of plans. You should not use a valuation metric in a deterministic way (i.e., “I’m going to earn x percent”). Instead, the forecast should only be used in a probabilistic manner. And you should not use valuations to time the market, shifting allocations toward higher expected returning assets.

For informational and educational purposes only and should not be construed as specific investment, accounting, legal, or tax advice.  Certain information is based upon third party data which may become outdated or otherwise superseded without notice.  Third party data is deemed to be reliable, but its accuracy and completeness cannot be guaranteed. By clicking on any of the links above, you acknowledge that they are solely for your convenience, and do not necessarily imply any affiliations, sponsorships, endorsements or representations whatsoever by us regarding third-party websites. We are not responsible for the content, availability or privacy policies of these sites, and shall not be responsible or liable for any information, opinions, advice, products or services available on or through them. The opinions expressed by featured authors are their own and may not accurately reflect those of Buckingham Strategic Wealth® or Buckingham Strategic Partners®, collectively Buckingham Wealth Partners. LSR-22-288

How profitable is retail options trading?

A tale of two small-cap universes

What insider trades (and non-trades) tell us about future returns