Glamour stocks, or “hot stocks” as they’re sometimes called, are shares that investors believe will increase in value faster than the rest of the market. They exhibit a tendency to create their own momentum or “lift”, as investors chase recent outperformance and fear missing out, which leads the price ever higher. The danger is that prices move so far away from fundamental values that they eventually fall sharply, which results in value stocks outperforming. The evidence suggests that’s precisely what has happened over the last year or so. And, as LARRY SWEDROE explains, value stocks still look very cheap, relative to historic levels. So are we seeing a regime shift, away from glamour stocks, towards value stocks?

As the authors of the study Clairvoyant Value and the Value Effect demonstrated, even though growth stocks have historically produced faster growth in earnings than value stocks, a systematic value strategy relying on perfect foresight of future earnings, cash flows or book values would have paid handsomely over the long term. In other words, great (faster growing) companies don’t necessarily make the greatest investments.

In addition, systematic value strategies that rely on a diversified set of simple valuation metrics such as price-to-book, price-to-earnings or price-to-cash flow based on current prices and earnings, cash flows and book values have performed as well as those that replace current earnings, cash flows and book values by the analysts’ forecasts of those metrics.

However, the years 2017 through 2020 were a “dark winter” for value investors as value stocks endured a period of severe underperformance that resulted in their largest historical drawdown. This period tested the patience and discipline of value investors and caused many to question the future of the value premium, asking: Is this time different? Has there been a regime change?

Despite the existence of the value premium over the long term, there have been other periods when value underperformed, with the late 1990s setting the previous record for a value drawdown. Value drawdowns can happen either for fundamental reasons or if investors become overoptimistic about the expected growth rates of glamour stocks and/or too bearish about growth rates for value stocks. Either way, the result is a widening of the gap in their valuations. Investor sentiment and herd behaviour can extend the expansion of value spreads for periods longer than many investors have the patience for.

The source of the dark winter for value stocks

Benoit Bellone and Raul Leote de Carvalho, authors of the study Value versus Glamour Stocks: The Return of Irrational Exuberance?, published in the February 2022 issue of The Journal of Investing, examined the evidence to try to identify the source of value’s underperformance during the 2017-2020 drawdown. To understand the drivers of such poor recent performance, they considered a decomposition of the value premium into a sum of three different terms: 1) the change in value spreads, 2) the difference in growth of fundamental measures between value and expensive stocks, and 3) the difference in dividend yields between value and expensive stocks.

The authors explained: “The first term is positive when value spreads compress, resulting from prices converging toward fundamentals. The second term tends to detract from performance, because value stocks tend to have lower growth rates than their expensive peers, even after neutralising sectors. The third term tends to be positive, because value stocks tend to pay higher dividends than expensive stocks.”

Bellone and de Cavalho also investigated the returns of other factor styles conditional to changes in the valuation spreads of value stocks relative to glamour stocks. To investigate how prices of stocks behaved relative to their fundamental values, they created a composite measure of value spreads calculated from a diversified selection of common value factors: book equity-to-price, tangible book equity-to-price, free cash flow yield (excluding financials), EBITDA-to-enterprise value (excluding financials) and forward earnings-to-price. Their data sample covered the period July 31, 1995-April 30, 2021. Following is a summary of their findings: 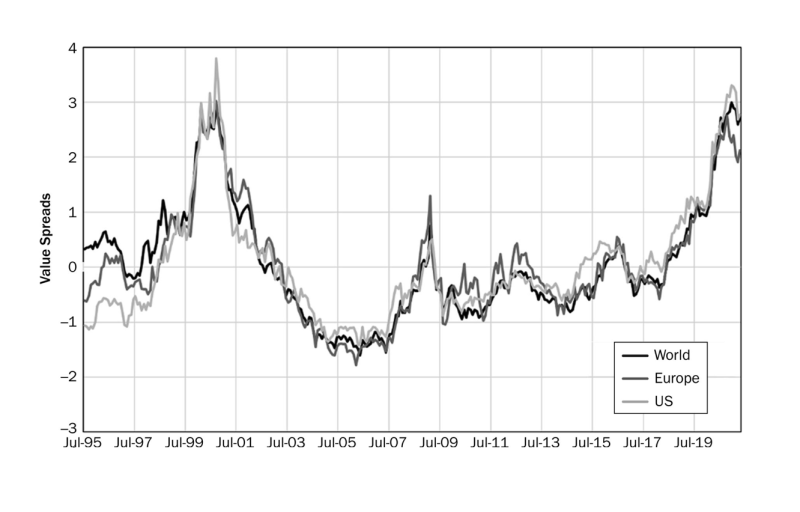 Their findings led Bellone and de Cavalho to conclude: “Value spread changes have detracted from the value premium since 2018 and are the likely key explanation of the underperformance of value stocks in every region and macro sector. Prices moved away from fundamental values, and value spreads reached extreme levels everywhere by the end of 2020.”

The fact that value spreads and earnings growth forecast differences peaked in 2020 and that value spread compression periods have been characterised by strong outperformance of value stocks relative to expensive peers is good news for investors, as both value spreads and differences in earnings growth forecasts still have a long way to go if they are to fall back to historical averages. According to AQR’s research, as of year-end 2021, their measure of valuation spreads for global value stocks were still at the 99th percentile of cheapness for the period beginning in 1994. In addition, and perhaps more importantly, they noted that “current value spreads imply that expensive companies will outgrow cheap companies by ~120% over the next 5-years,” which is “a rate that is 2-3x higher than ever realised in the past.” AQR also noted that if value stocks were to repeat their outperformance over the period 2000-03, they would outperform by 108 percentage points.

The bottom line is that while growth stocks in particular, and market indices in general, are quite expensive relative to historic levels, relative to growth stocks, value stocks are very cheap.

For informational and educational purposes only and should not be construed as specific investment, accounting, legal, or tax advice.  Certain information is based upon third party data which may become outdated or otherwise superseded without notice.  Third party information is deemed to be reliable, however its accuracy and completeness cannot be guaranteed. Indices are not available for direct investment. Their performance does not reflect the expenses associated with the management of an actual portfolio. Information from sources deemed reliable, but its accuracy cannot be guaranteed. Performance is historical and does not guarantee future results. Index total return includes reinvestment of dividends and capital gains. By clicking on any of the links above, you acknowledge that they are solely for your convenience, and do not necessarily imply any affiliations, sponsorships, endorsements or representations whatsoever by us regarding third-party websites. We are not responsible for the content, availability or privacy policies of these sites, and shall not be responsible or liable for any information, opinions, advice, products or services available on or through them. The opinions expressed by featured authors are their own and may not accurately reflect those of the Buckingham Strategic Wealth® or Buckingham Strategic Partners®, collectively Buckingham Wealth Partners. Neither the Securities and Exchange Commission (SEC) nor any other federal or state agency have approved, determined the accuracy, or confirmed the accuracy of this article.LSR-22-234

Are stocks bought by noise traders at greater risk of crashing?

As goes January, so goes the year?

Is there a case for investing in private real estate? 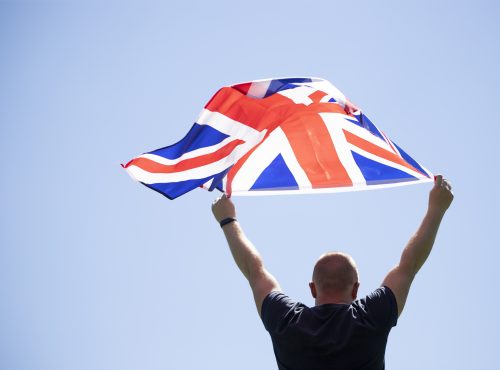