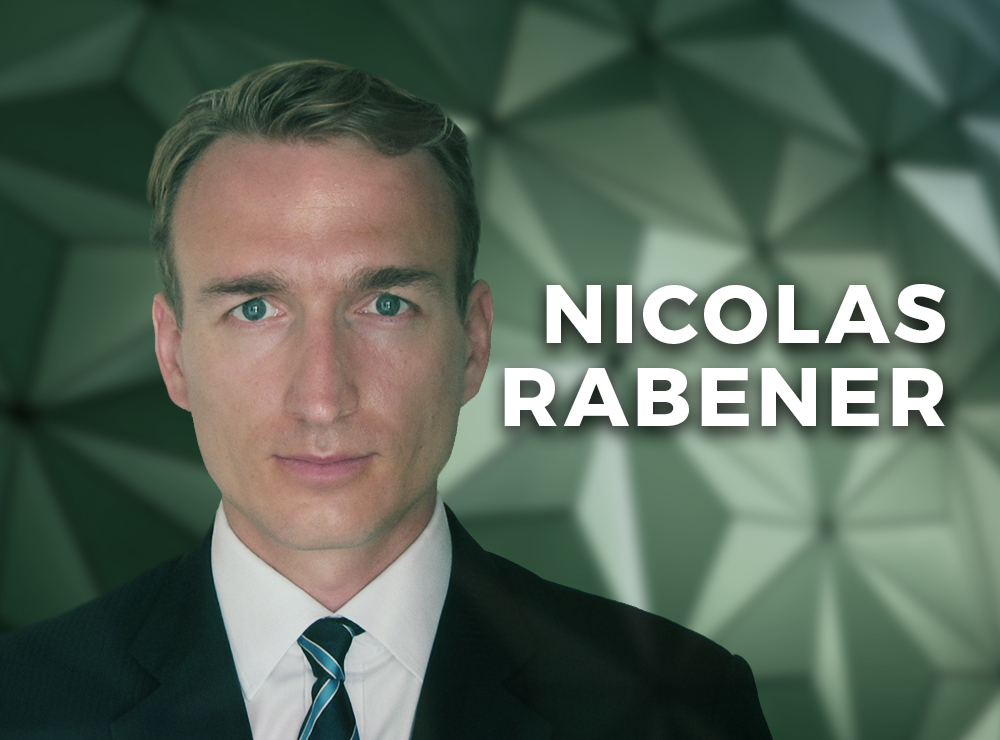 The biotechnology sector was billed as the next big thing in the early 1990s, and it remains one of the most popular investment “themes” today. Although the potential for growth is indisputable, returns have so far been unimpressive, and the sector still accounts for just 4% of the Nasdaq Composite Index. Also, as NICOLAS RABENER explains, active fund managers specialising in biotech have failed to generate alpha.

Most technological change today is an evolution rather than a revolution. Naturally, it is great to have a mobile device that allows instant access to the global knowledge depository, entertainment, shopping, and so on, but most of these innovations have been predicted decades ago by science fiction authors. Reading such novels actually makes human progress seem awfully slow. Human colonies amongst the stars and interstellar travel still seem ages away.

Aside from building better machines to help us in work and life, changes to our bodies and genes are also frequent topics of science fiction. The progress there seems even slower.

Although the life science industry did manage to create COVID-19 vaccines in a short time period, we still suffer from cancer, tooth decay, and obesity. It is obvious that most of such conditions can be fixed with genetic modifications at some point.

Investors focused on long-term themes often include an allocation to this genetic revolution. There are plenty of broad indices that provide exposure to biotechnology or pharmaceutical stocks, as well as strategies specialised in cancer, gene editing, and Chinese biotechs.

In this research article, we will evaluate the track record of the biotech sector in the US stock market.

Most of the large listed biotech companies are not known to the public, except perhaps Moderna, which was one of the earliest companies to offer a COVID-19 vaccine. The obscurity of biotech companies is partially explained by many of these having distribution agreements with the large pharmaceutical companies, which puts their own brands into the background. Furthermore, the biotech sector acts as an incubator for the pharmaceutical industry where startups with attractive drugs in development are often acquired, thus ceasing to exist as publicly traded stocks.

Theoretically, the significant amount of M&A in the biotech sector should make it attractive as large premiums are frequently observed. However, when we contrast the performance of the Nasdaq Biotech to the Nasdaq Composite Index, we observe that the total return was almost identical in the 30 years between 1993 and 2022. Albeit, there was meaningful outperformance between 2011 and 2015, but underperformance thereafter. 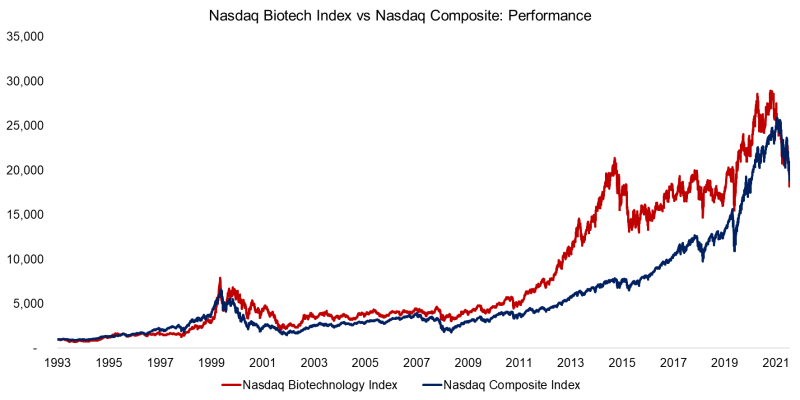 Significance of biotech stocks in the the stock market

Considering the breakdown of the Nasdaq Composite, which is a market capitalisation-weighted index, highlights the small contribution of the biotech sector with a mere 4%. There are six industries that each contribute more, where software stocks lead with 15%. Given the complexity of analyzing biotech companies, investors could conclude that they can safely ignore them.

However, it is worth highlighting that industries fall and rise, eg railway stocks were once the dominant sector. Given the potential for biotech companies to change our lives, at some point, these will be the most important stocks. Naturally, the question is when. 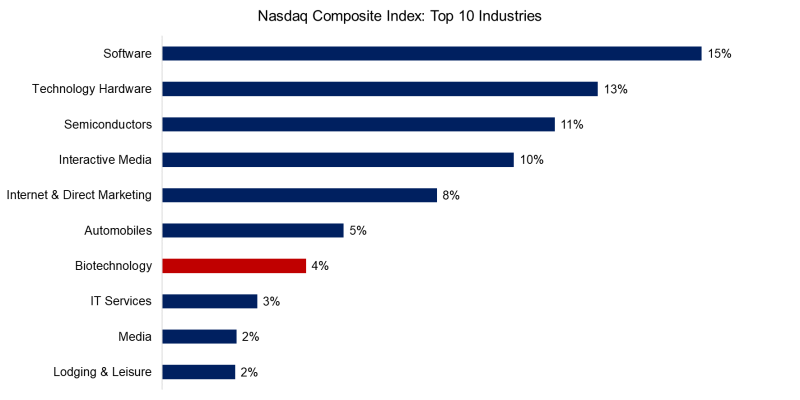 Next, we run a factor exposure analysis on the Nasdaq Biotech Index that reveals negative exposure to the value factor, positive exposure to the size factor, and low betas to momentum, low volatility, and quality. These results are rather intuitive as most biotech companies are small and have negative earnings that make them expensive.

The financial data for many of these companies will not be meaningful while they are developing drugs as they will not have any revenues. Once a drug passes some initial tests, the distribution rights are usually sold to a pharmaceutical company for an upfront payment and royalties. Before that, it is largely about evaluating the probability of a drug moving from inception to prescription, which is challenging as it is rather binary. Either a drug passes clinical trials, or it does not, but it can’t be modified like software via trial and error to find product-market-fit. 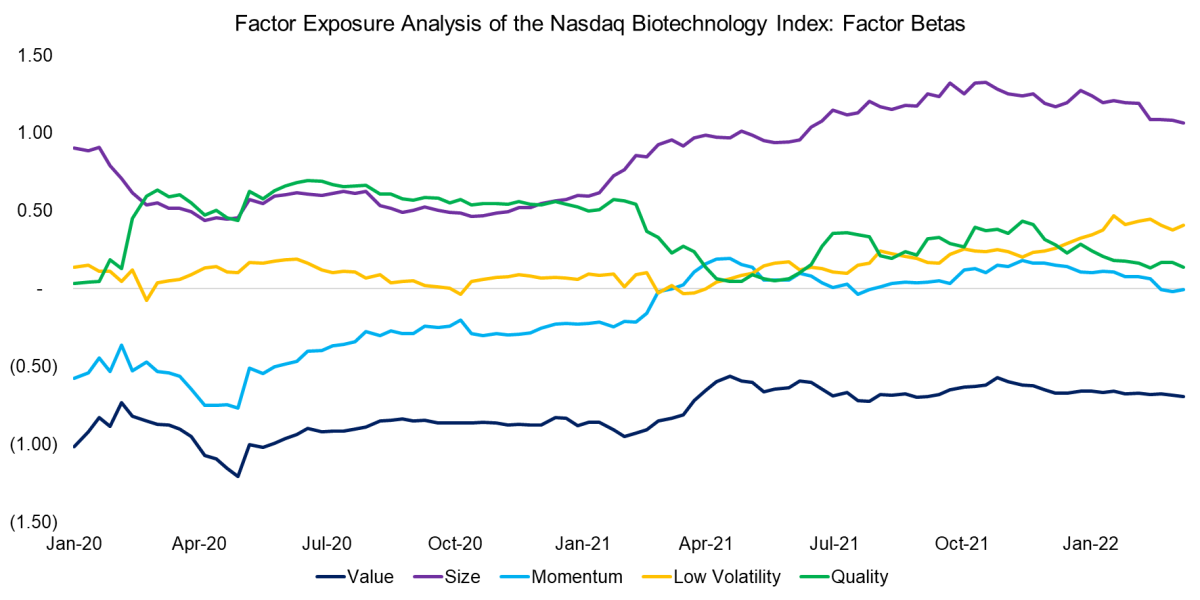 Given the complexity of analysing the stocks, capital allocators might speculate that these are interesting for using active managers rather than passive index exposure.

Fidelity has been running a biotech mutual fund (FBIOX) since 1986, which is the largest mutual fund in this space with $6.7 billion of assets under management. However, its managers have failed to generate alpha over the last 25 years and its performance is almost identical to that of the Nasdaq Biotech Index.

In contrast, hedge fund managers focused on biotech stocks have outperformed the index significantly over the same time period, as measured by the BarclayHedge Biotech Hedge Fund Index. However, it is worth mentioning that performance reporting is voluntary and hedge fund managers that underperform tend to stop reporting, which leads to returns being overstated. 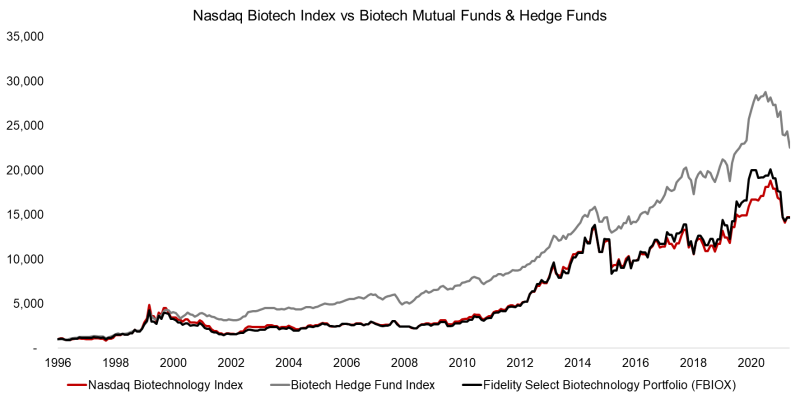 If we measure the alpha generated over the last decade by hedge fund managers, then this is negative as the index underperformed the Nasdaq Biotech Index significantly since 2012.

Naturally, hedge fund managers might argue that they provide more than long-only exposure, but that is not true in the case of these biotech hedge fund managers. Their performance shows the exact same trends as the Nasdaq Biotech Index, which highlights little to zero short positions, and can be replicated easily through a simple combination of equity exposure via an ETF and cash. 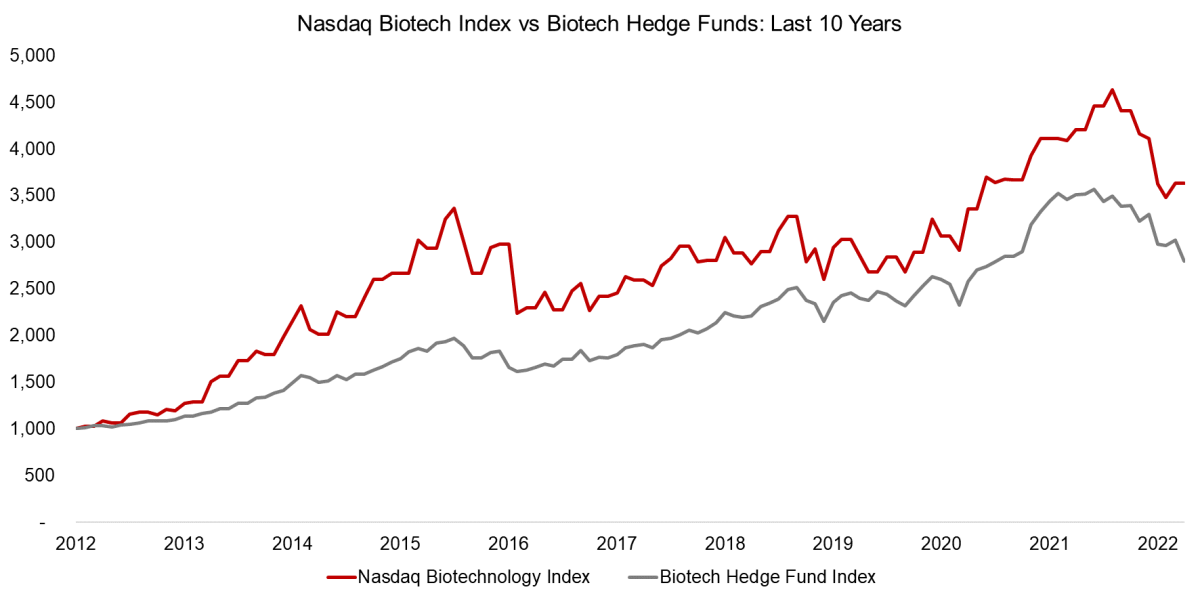 Biotechnology will have an increasingly larger impact on our lives as innovations incur, which can range from stopping or reversing hair loss to extending our natural life spans to centuries. The potential is there and has always been, but it has not been a great bet for investors so far.

It is interesting to consider why active management has not created value in this sector. Many mutual and hedge fund managers have outside advisors that are experts in drug development, for whose advice they pay thousands of dollars. This should create a competitive advantage compared to a generalist portfolio manager or retail investors, but it has not. Financial experts are overrated given the general lack of alpha generation by active managers, but it seems scientific experts fare no better.

Intuitively, you’d think that an easy way to make money in stocks would be to identify, in advance, a sector that’s going to grow massively and invest heavily in it.

Unfortunately it’s not that simple. People who invested in railway stocks in Britain and Ireland in the 1840s, for example, or in dotcom stocks in the 1990s, were on one level absolutely right: both were game-changing technologies which went on to have a huge impact on people’s lives.

But making money from that accurate prediction was altogether more challenging. Most of the benefits of rail travel and the internet accrued not to shareholders but to consumers. Indeed, the vast majority of companies went bust. Of course, it was possible in theory to pick one of the very few long-term survivors ex ante, but the odds were very heavily stacked against you.

So although Nicolas Rabener’s findings on biotech stocks might seem surprising, they are actually anything but.

As Nicolas rightly says, biotechnology has the potential to help us live longer, healthier lives, and it’s fair to assume that, one day, biotech stocks will account for a much larger share of the stock market than they do today. But knowing when to invest, and which stocks to invest in, is extremely difficult; specialist professionals have mostly failed to beat the market.

A far more sensible strategy is to diversify across every sector, paying particular attention to factors such as size and value which have historically produced higher returns.

Biotechnology may well have a very positive influence on your life and mine in the years ahead; but it’s unlikely to make either of us spectacularly wealthy.

How to spot a financial fraudster

The takeover effect: what it is and how to benefit