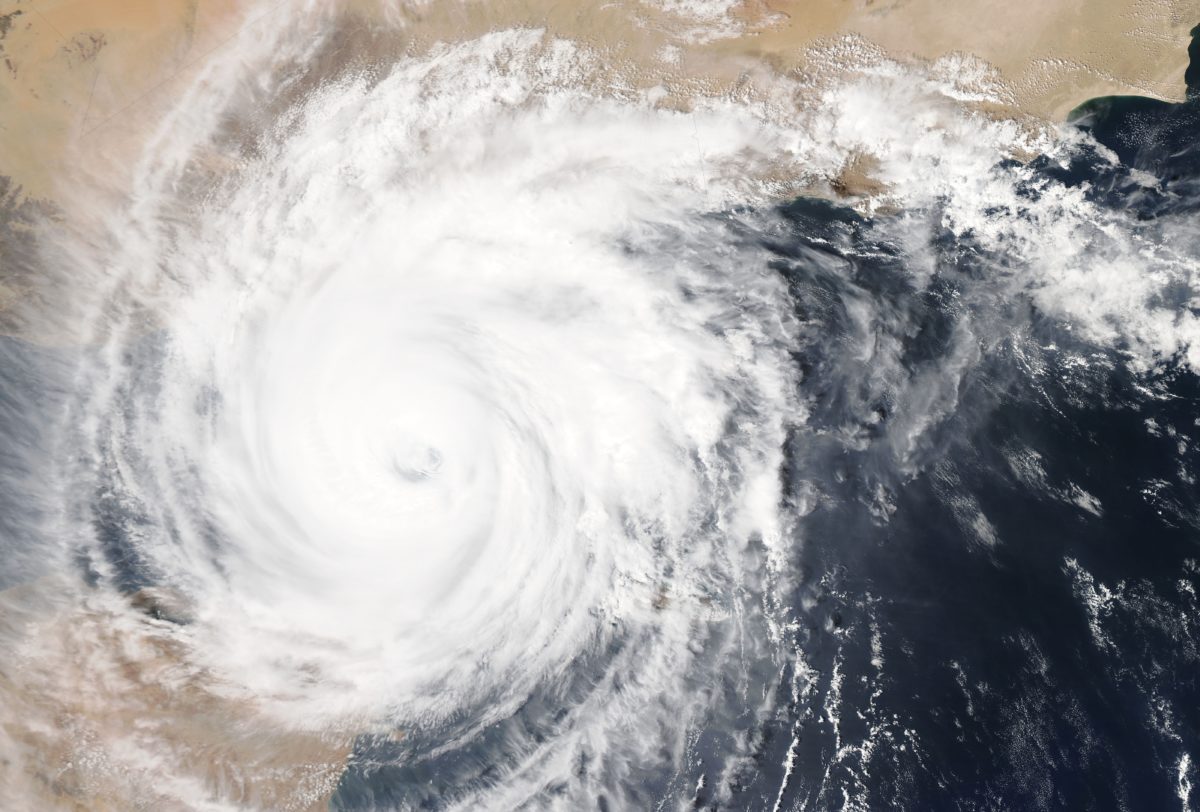 The financial industry believes part of giving advice is providing market outlooks and each calendar quarter-end is prime time for prognostications.

Just Google the name of any big bank and “market outlook” and you’ll be able to see the latest forecasts and tactical market calls from the likes of Goldman, Morgan, Merrill, J.P Morgan, etc. (no – you don’t need a “special” or large relationship to get this information anymore).

Countless studies show that economic and market forecasting tend to have worse than coin-flip odds.

And, you certainly don’t want to follow market headlines.

If you had, you would’ve likely missed out on the incredible run in the stock market over the past decade (see the chart below).

A recent article in The Guardian, Why Economic Forecasting Has Always Been A Flawed Science, helps shed light on this with these quotes:

“…analysis revealed that economists had failed to predict 148 of the past 150 recessions.”

“Not only have we been bad at forecasting, but there is not much sign of improvement.”

Government officials and investment analysts don’t seem to be much better.

The US Congressional Budget Office released an update of their forecasting record in 2017.

What did it show? 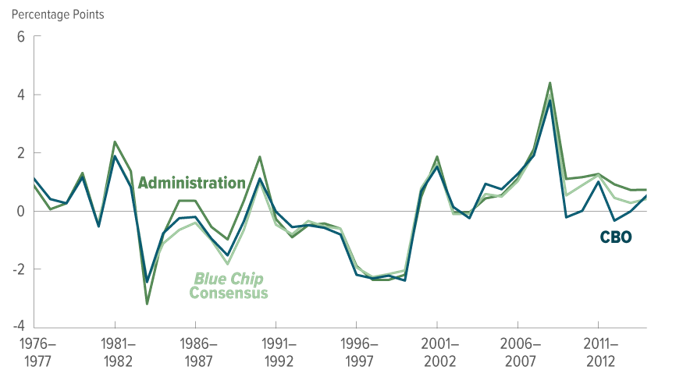 As this graph illustrates, their Real GDP forecasting errors have been real.

Given that Real GDP over this time period averaged around 2-3%, their forecast errors of ~2% are quite different than reality. In addition, the CBO’s report showed that their track record for other economic measures, like inflation and bond yields, have been off.  As they said:

“large errors [in their] forecasts tend to reflect challenges faced by all forecasters.”

A research paper published by the Boston Federal Reserve in 1992 reported similar results, summarised as: “[forecast] errors were enormous in the severe recessions, … and business cycle turning points.”

The forecast did not anticipate the Great Recession that started in December 2017.

It underestimated the severity of the downturn once it began.

It consistently over-predicted the speed of the recovery that started in June 2019.

“[We] didn’t see any of that coming until it happened.”

How about Wall Street gurus or analysts?

Charts like this from McKinsey, which date back a decade, point to why we often hear that many in the industry don’t place much faith in their projections anymore. 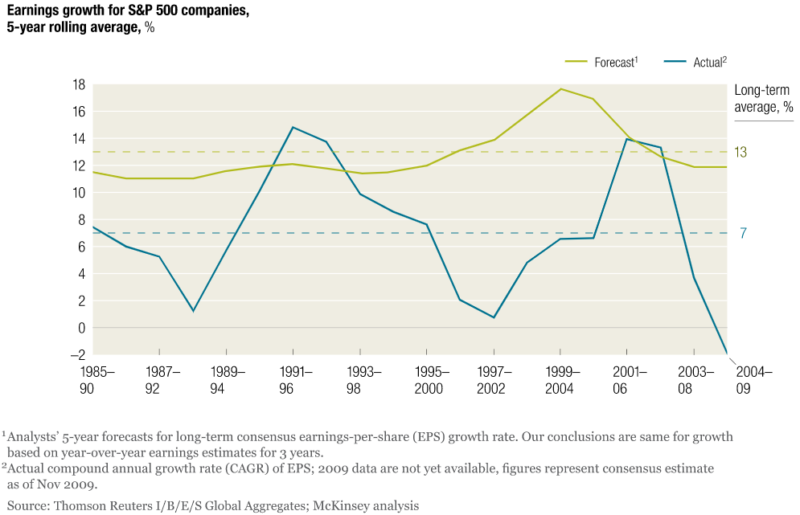 More on Gurus’ average accuracy of only “47.4%” can be found here, with charts like this. 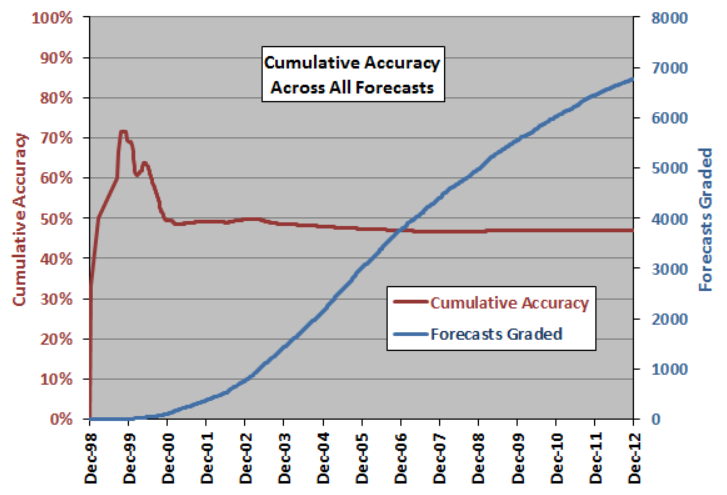 A recent article by Institutional Investor, No You Almost Certainly Can’t Time Markets, did a nice job exploring this lack of success.

The title kind of says it all, but please consider a read.

As we’ve said in previous posts, “the evidence suggests that market forecasts aren’t worth much, but this doesn’t mean you shouldn’t look at data. Data can absolutely help you develop a long-term plan you feel comfortable enough to stick with and not change based on short-term predictions.”

The problem with forecasting is that it is not only notoriously unreliable, but it is also difficult to connect projections to future market outcomes.

Financial markets are forward-looking mechanisms that work to build in future expectations of all participants.

Markets incorporate the views of the millions of market participants on economic and political events every second of the day. It is a complex system that is also driven by human emotion, which contributes greatly to its unpredictability.

History has consistently shown that by the time economists predict or call recessions, markets have already priced it in, or they might already be over.

It should be backed by logic and theory. And, it is.

Chaos Theory explains why complex systems like markets are not predictable but other complex systems, like weather can sometimes be (no jokes please).

When you measure the weather, the act of measurement does not change it. This is called a Level 1 chaotic system. This makes weather at least somewhat predictable.

Unfortunately, economies and the stock market are not driven by physics and things that can be accurately measured like barometric pressure.

Markets are driven by humans and their emotions, which can change as humans make changes based on emotions.

This is a Level 2 chaotic system.

The difference is how measurement of the system, or interaction with it, impacts the system.  This is one of the key reasons why theory says economic and market forecasting often fails.

If someone thinks a stock is cheap or expensive, they might buy or sell.  These very acts, however, can change the stock price.

Even Phil Tetlock, an expert on academic research on forecasting and author of the book Superforecasters, suggests that time shouldn’t be wasted on predictive systems ruled by randomness, like long range economic forecasting.

With so much evidence against the use of forecasts, why do investors waste their time listening to them?

Maybe the reality is that some of the best investors don’t.

Warren Buffett, Howard Marks, Peter Lynch, Benjamin Graham, and other leading investors have repeatedly stated that they don’t put much faith in economic or market forecasts when making investments.

“In reality, no one knows what the market will do; trying to predict it is a waste of time, and investing based upon that prediction is a speculative undertaking.”  – Seth Klarman, Margin of Safety

What do we see great investors consistently do?

Build a margin of safety and prepare for an unpredictable future.

Thoughtful diversification, combined with a disciplined approach, can be one way of building in this safety.

This is why we recommend all investors have a written Investment Policy Statement (IPS) in place before any investment plan or product is implemented (emphasis on “before”).

A simple IPS can set long-term targets for various asset classes, and maximum and minimum risk control ranges around the targets. This way, regardless of the emotion of the market, you can keep yourself from making big bets that could turn into big mistakes.

It doesn’t have to be complicated

As an example, an investor having a long-term IPS target of 60% in equities, might consider having a low-end range of 50% and a high-end range of 70% (tighter bands can equal greater risk control).

If the market drops significantly and the equity allocation goes below the minimum range, the IPS mandates that an investor buy. On the other hand, if the market has run up significantly, the maximum IPS ceiling forces selling to take some chips off the table.

Trying to buy cheap, high quality assets, or find managers who can, are other ways, but as we have noted before , both of these games are hard to consistently win over time.

Whichever path you choose, keep this in mind:

The best investors understand that they will be wrong — often — they don’t make big bets on economic and market forecasts.

MANEESH SHANBHAG is the founder of the New York City-based wealth management firm Greenline Partners, where he is responsible for research and the investment process.

More evidence that passive funds are superior to active

It’s not over till it’s over