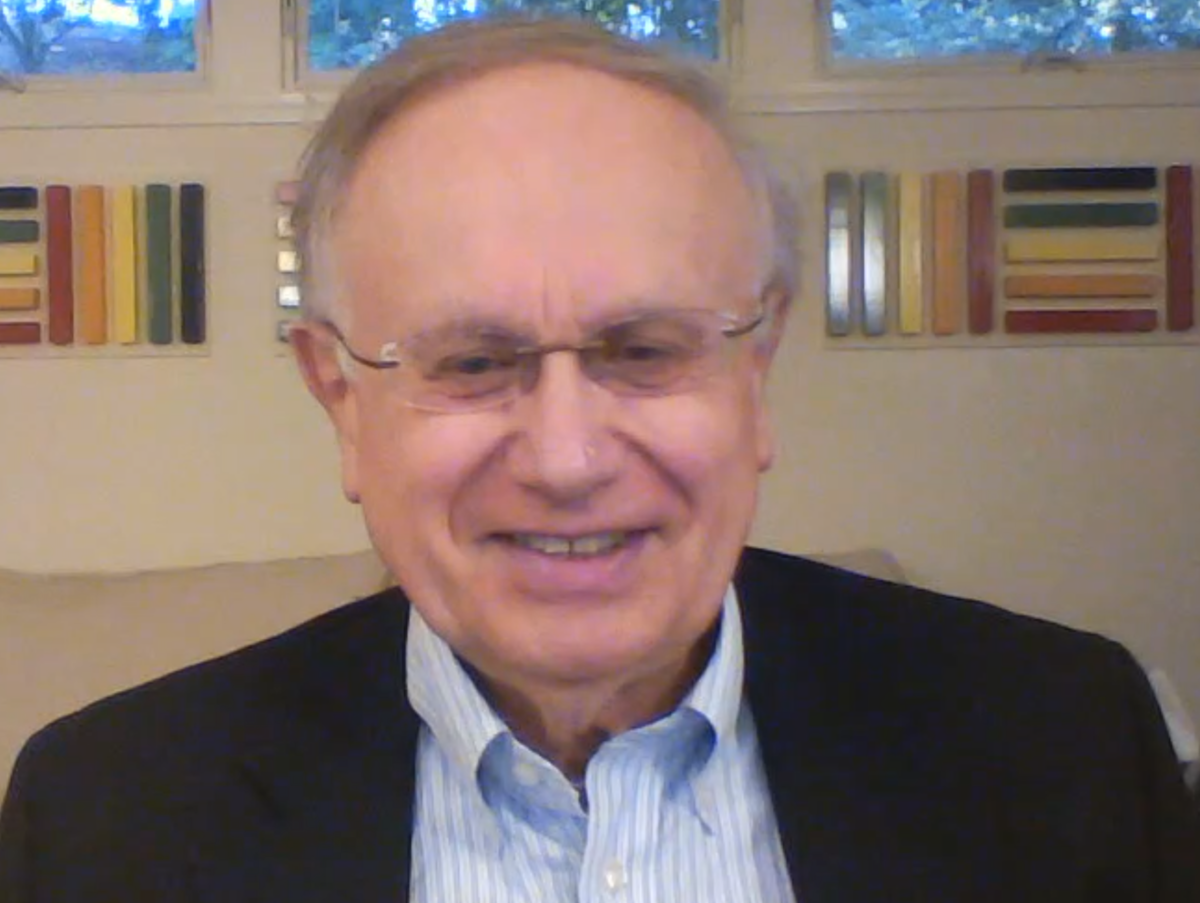 With the UK and other parts of Europe experiencing record-breaking temperatures this week, the papers are full of ideas on handling the heat. But what about keeping your cool in a global bear market? Where do you look for advice on that?

Well, ROBIN POWELL been speaking to the world-renowned behavioural finance expert MEIR STATMAN for the latest episode of The Investing Show.

Even Professor Statman admits to feeling anxious in recent months about rising inflation and interest rates, for example, and the continuing war in Ukraine. But he’s never once been tempted to reduce his market exposure. So what’s his secret?

Here are some more highlights from Robin’s interview with Meir Statman:

In reality, how many investors do actually panic in a market downturn?

I think that the proportion of the people who panic and just sell all the stocks they have is relatively small. Most people by now have surely realised that it is not a wise thing to do, especially in retirement saving. I think most investors now see investing as a way to save for retirement rather than to play the market, and that really is a good thing.

We assume that professional investors are more disciplined than the rest of us, but that’s not necessarily the case, is it?

You’re right. Professionals are just like amateur investors in a number of ways — they’re subject to the same emotions. One key difference though is that the professionals are observed by others. I don’t have to disclose my portfolio to anybody, but they have no choice but to disclose theirs. And people expect the professionals who manage their money to do something — you know, not just stand there — and if they’re being paid to act, they do act more often than not. I don’t really know why so many investors trust these professionals to do what is right for them.

You’ve written in the past about hope and fear actually being quite useful emotions, but the problem is that they sometimes become exaggerated. What do you mean by that?

Well, God or evolution planted emotions in us to help us, not to spite us.  They interact with cognition and they help us, rather than hinder us. Take fear, for example. When you see a snake, you recoil; that is the reaction prompted by fear. You do not engage your cognition to figure out whether this snake is poisonous or not; you just move back. You slam on the brakes when the car in front of you stops; again, there’s no time for cognition here.

So emotions are really quite useful, as is hope. It is really important to see that, in every product or service or activity, there are three kinds of benefits. There are the utilitarian benefits — what does it do for me? — but there are also expressive benefits and emotional benefits. Think about lotteries, for example. Standard finance says people buy lottery tickets because they don’t know statistics and mathematics, and so they don’t understand that the odds are smaller than they think. But I would say that everyone who ever bought a lottery ticket enjoys the emotional benefits of hope between the time we buy the ticket and the time we find out that we lost again, and in this sense hope is really a useful thing.

So, if you are fearful enough to dump all your stocks, that is bad; and if you are so hopeful that you invest in something that promises ten per cent per week, that is bad too. Generally speaking, hope and fear are very useful. Exaggerated emotions, however, are not.

So what can ordinary investors then do if they feel they’re starting to panic and may be in danger of making an irrational decision? Are there some simple rules that you can recommend?

I think so. I’ve heard from from other behavioural finance experts and psychologists that those cognitive errors and emotions in us are impossible to overcome even if you know about them. Personally, I think that is an exaggeration.

Think of the standard advice when you get angry, for example. It says, count to ten before you open your mouth. That is a way to withstand that anger and prevent it from becoming a real danger.

I like to say, whenever you think about trading, about buying or selling other than for liquidity reasons, you should always ask yourself: who is the idiot on the other side of my trade? In every trade there is an idiot. People in behavioural finance will say investors are overconfident, but before overconfidence comes framing errors.

So, every time you feel like now is the time to sell or buy more, you have to ask yourself: what do you know that other people, including the professionals, do not know? And the true answer for most people, most of the time, is nothing!

It’s not that I do not feel anxious; I do. But I just don’t act on it; in the same way that I count to ten when I’m angry before I open my mouth.

Does it make sense to distract yourself? How about turning off CNBC and going for a walk, or doing some gardening or reading a book?

Well, distraction might be a remedy, but there is another. You can still watch CNBC, but vaccinate yourself against it, so to speak. If you’ve watched CNBC, have you noticed that there are always two experts? One says the market is going to go up, and the other says the market is going to go down. And so you know that neither of them knows anything! They are just taking guesses. If you watch it with the volume on mute, you will be fine.

As I say, I like to remember that there is an idiot in every trade and I am not going to do anything that is going to make me that idiot. And I remember that I’m investing for the long run: that money is going to grow, or it’s going to diminish, and that is life.

People think about the risk to their portfolio, and I say: if you want to take risk, get married; and if you want more risk, have children. You have to put it in perspective and know that your portfolio is not the end of the world. The stock market is not the centre of the universe.

For those who who are anxious, does having a financial adviser help in these situations? And if so how?

Well, financial advisers can be really, really useful here. They are really earning their fees when they dissuade panicky investors from doing something that is really stupid; and so the first line of defence is to recognise that you don’t know anything more than others — and just because you feel bad and panicky, there’s no reason for you to sell. But if this is not sufficient, then financial advisers are the second line of defence: they can reason with people and explain precisely what they are talking about. They can say, “Look, I understand panic, I understand fear. This is natural to me, too — but my advantage over you is that I’ve learned things that I can teach you. Don’t act rashly, maybe wait two weeks to see if you cool down or change your mind.”

Some people say that advisers do nothing useful, because they don’t beat the market. But advisers manage investors more than they manage investments, and that’s where they justify their fees.

Clearly, selling equities when markets have fallen is not a good idea. But what would you say to people who have found recent market falls much harder to stomach than they expected? What should they do? Should they review their risk capacity? And if so, when?

I always say, if you cannot sleep because of the volatility in the market, take a sleeping pill. Don’t touch your portfolio; that is not the best thing to do. I also think that we don’t really have attitudes towards risk, we have aspirations.  There are two things that we want in life: one is to be rich, and the other is not to be poor.

So, you have to ask yourself: what will happen if you convert all your money now into cash or into treasury bills? If you are a young person, will you accumulate enough money for retirement? You might find that you don’t have enough for retirement — so ask yourself again, not what is my attitude towards risk, but what are my aspirations?

Risk is what we pay for the hope of reaching our aspirations, and the last thing you want to do when you are rattled by the market is get out of the market — because that way you only increase your risk. You’ll only lessen your chances of having a secure retirement rather than enhancing them.

Of course, some investors will have taken risk off the table with a view to getting back into the market at some stage. Others will be putting off investing until the volatility subsides. What are the dangers with that strategy?

The danger really is that, contrary to your perception, you don’t know when the market is at the top or at the bottom. Let me give you a quick a quick example. In May 2009, I was speaking to a large group of advisers. People were walking around with ashen faces as if the world was coming to an end.

We didn’t know what would come next, but we do know in hindsight that in May 2009, the market was already on the upswing. The bottom was in March, but people didn’t see it, and I didn’t see it, because when we look at the market day by day, it goes up and it goes down. We don’t really see a trend. You see a trend only when you look back at it. So by giving up hope of figuring out when to get in and when to get out, you are really doing a great favour for yourself, because it’s true, you don’t know.

Remember, it also helps your mental health because, if you are fearful and you sell all your stocks now, you have to make the decision of when to get back in. Let’s say that you sold them in the March or May of 2009, and now the market has gone up, and it has gone up beyond the price at which you sold.

Do you buy now? Well, no — because this would make you feel stupid. And so you just hold on and you say, “no, this is just a dead cat bounce or whatever,” and then the market goes even higher and then eventually you might just buy.

They say wise people don’t get into holes that smart people can climb out of, and I would rather be wise than smart.