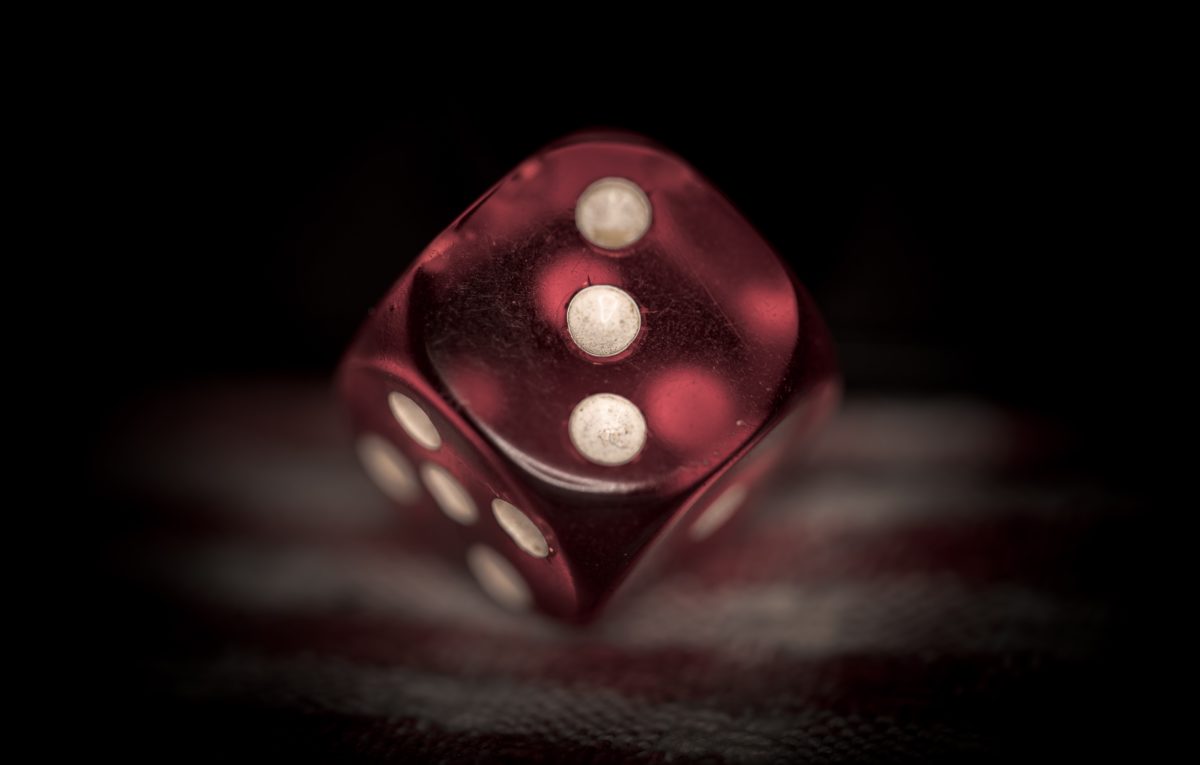 The menu of thematic funds has mushroomed in recent years. These funds attempt to harness secular growth themes ranging from artificial intelligence to cannabis. The result has been a steady supply of greater complexity from asset managers and increased demand for greater clarity among investors. In our recently issued report on the global thematic funds landscape, we introduced a novel taxonomy for classifying these funds. Here, with help from this framework, I’ll analyse key trends in the U.S. thematic funds’ landscape. I’ll finish by sharing best practices for choosing from this expansive universe.

Defining the universe of thematic funds

We have defined the universe of thematic funds as those that select holdings based on their exposure to one or more investment themes. These themes may pertain to macroeconomic or structural trends that transcend the traditional business cycle. Examples include demographic shifts or technological advances.

Our definition includes funds like cannabis exchange-traded funds, which hope to capitalise on the legalisation and commercialisation of cannabis globally. We exclude funds that might be useful for making tactical economic calls but lack a cohesive longer-term narrative, such as those that target Japanese exporters.

Although many active managers select investments based on exposure to a theme as part of their investment process, we have isolated a distinct subset of funds that explicitly target these themes, be they actively managed or indexed. The purpose of this exercise is to identify and analyse these funds to help investors better navigate this landscape.

To make sense of the diverse universe of thematic funds offered to investors around the world, we have developed a three-tiered taxonomy.

At first glance, it appears that thematic funds tend to resist rigid categorisation. However, after assessing the global universe of these funds, we found that themes do cluster into distinct groups. For example, funds tracking Smart Car, Next-Generation Automobile, Hybrid Car, and Automated Driving themes can all be comfortably collected under the umbrella of Future Mobility–which, in turn, can be grouped with other themes under a broader theme, in this case Technology.

The market for thematic funds in the United States has expanded dramatically in the past five years. Supported by strong net inflows, assets invested in thematic funds have nearly quadrupled to $30.1 billion. Of the 127 thematic funds available to investors as of the end of 2019, 92 (72%) were launched during this span. 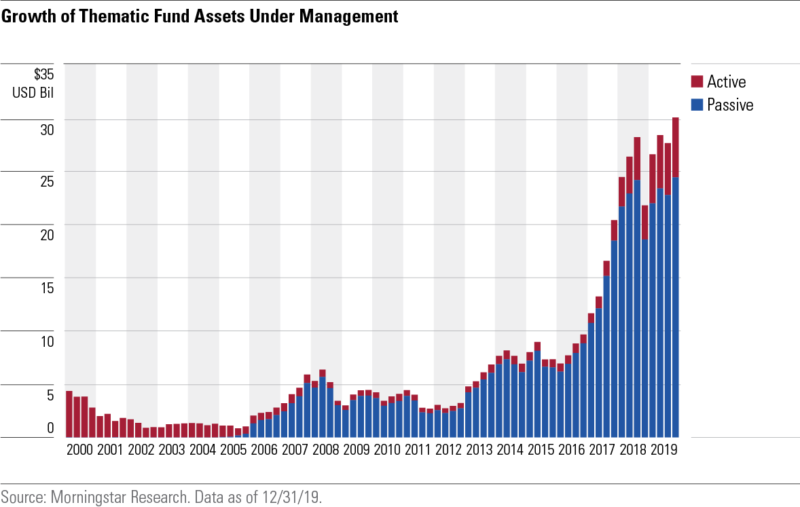 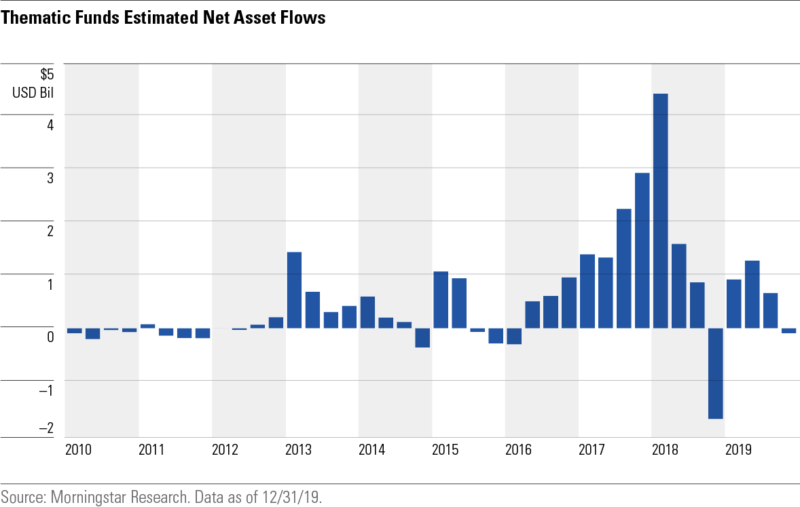 As of December 2019, passive funds controlled just over 81% of thematic fund assets in the United States. Passive thematic funds’ rise to current market share levels came in one burst in the mid-2000s. Between January 2005 and June 2007, outflows from actively managed strategies that focused on Internet and e-commerce stocks overlapped with the launch of several ETFs from Invesco (then PowerShares) that quickly grabbed assets. Over that period, passive funds’ market share of thematic fund assets surged from less than 1% to almost 80%. These early thematic ETFs from Invesco primarily focused on various forms of clean energy and water. All but one of them survived to December 2019. Since then, passive thematic funds–and ETFs in particular–have accounted for the bulk of growth.

Historically, thematic fund launches have aligned with periods of strong market performance, like the inflating of the dot.com bubble, the mid-2000s and–most recently–the five years through December 2019. Launches have waned during downturns and closures have waxed, as the exhibit below illustrates. This indicates that investors’ appetites for these strategies and the desire for providers to offer them tends to move in sync with the broader market. In short, thematic fund launches tend to be a bull market phenomenon. 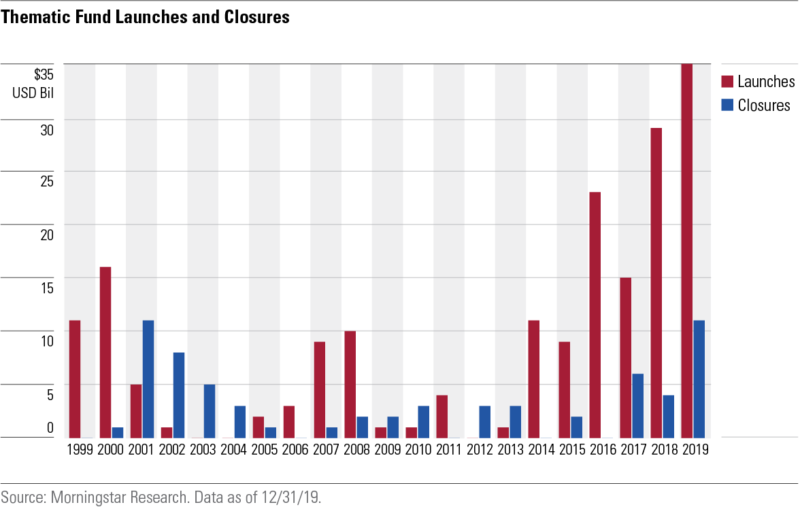 Most of the assets in this universe are controlled by a handful of funds. As of the end of 2019, only eight funds had assets exceeding $1 billion. Those eight funds collectively controlled over half of the region’s thematic fund assets. 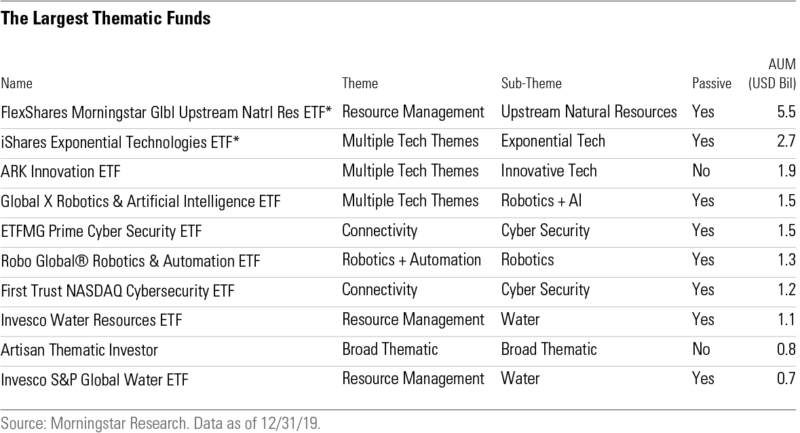 Technology is the most popular Broad theme in the U.S. Funds falling under this grouping account for almost 60% of thematic assets. Those with Multiple Technology themes, such the iShares Exponential Technologies ETF*, which tracks nine distinct technology themes, claim the most assets. Also popular are those with a Connectivity theme, a grouping which includes Cyber Security strategies.

Themes focused on the Physical World take up more than a third of assets. Resource Management funds are the most popular theme within this bucket. This grouping includes the largest thematic fund in the region: the FlexShares Morningstar Global Upstream Natural Resources ETF* and several large water funds.

Market dominance extended beyond individual funds to fund providers. The next exhibit shows the 10 largest providers by assets, which controlled more than 85% of all thematic fund assets. Most of the funds and providers have small asset bases. As of December 2019, the median assets under management among U.S. thematic funds stood at just $37 million. Funds with smaller asset bases, meaning those with less than $100 million, indicate that a strategy or theme has not gained (and may not ever gain) traction. Caution is warranted with these smaller funds as they could potentially liquidate because of a lack of interest. 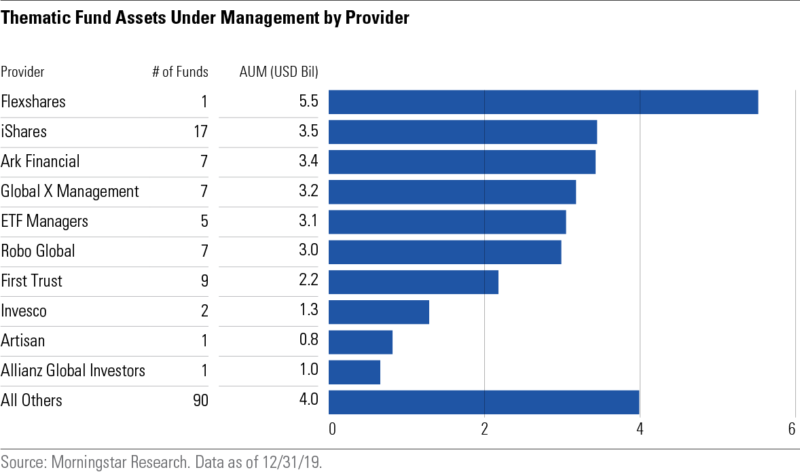 At the end of 2019, three fourths of all thematic funds in the U.S. exhibited a growth tilt, as measured by where their portfolios plot on the Morningstar Style Box. Just over 5% showed a value bias. Their growth orientation comes as little surprise given that most focus on emerging secular trends in relatively faster-growing sectors like technology and healthcare.

While the average annual management fee for all thematic funds is lower than that for all non-thematic funds, closer inspection reveals that the large number of relatively cheaper passive funds in the sample has weighed down the average.

By splitting active and passive, we can see that the average fee is higher for both. Also, these funds’ fees are much higher than the cheapest core beta products, which might charge a few basis points annually — if they charge anything at all. Thematic funds’ higher fees represent a higher hurdle to success. 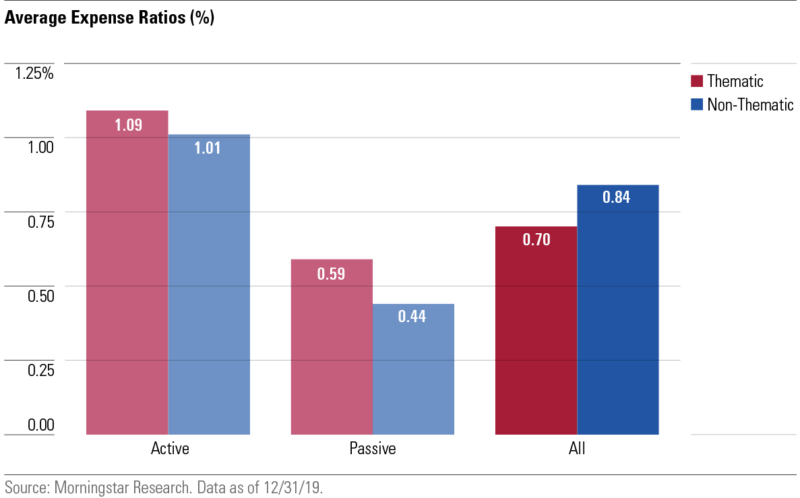 Investors in thematic funds are making a trifecta bet (a term from the racetrack). Specifically, they are implicitly betting that they are:

The long-term performance figures for thematic funds are not flattering. They suggest that investors’ odds of selecting a fund that will survive and outperform over the long run are slim.

Fitting thematic funds into your portfolio

Because of their narrow exposure and higher risk profile, thematic funds are best used to complement rather than replace existing core holdings. Some, like Global X Thematic Growth ETF (GXTG), might be considered as part of a core allocation, as they are broadly diversified and retain some of the characteristics of a broad global benchmark. More-narrow exposures might also be considered as single-stock substitutes for those investors looking to express a view on a theme but who lack the time, tools, and inclination to conduct due diligence on individual companies.

Durable themes are expected to play out over many years. This means that they are best deployed over longer investment horizons.

Most thematic funds will be used with the hope of boosting returns over the investment period, but some can be specifically used to reduce portfolio risk. For example, alternative energy funds can be substituted for core energy holdings to reduce carbon risk.

Even if we set aside the claims of prospective outperformance from asset managers, if a thematic fund has drivers of risk and return that are distinct from other portfolio holdings, adding them around the margins of a core portfolio might yield diversification benefits.

The exhibit below shows the distribution of five-year returns and standard deviations for all the surviving thematic funds we examined globally. The MSCI World Index is represented by the red spot. Clearly, the majority of these funds have failed to either boost returns or reduce risk relative to the cap-weighted global equity benchmark. 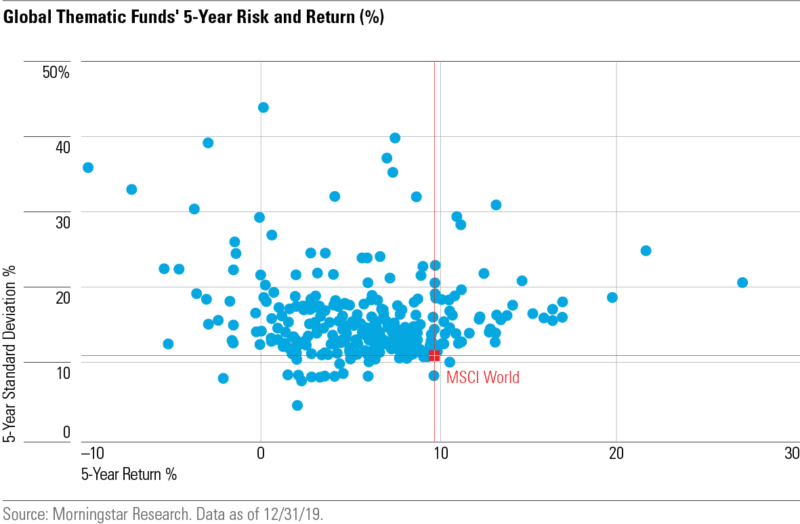 Thematic funds have captured investors’ imagination, but buyers should beware. Oftentimes, these funds are designed more with saleability in mind than investment suitability. Many cross the border into gimmick territory. Examples abound. The Whiskey ETF, The Kids Fund, and StockJungle.com Pure Play Internet Fund are just a few examples of those that have come and gone over the years. Investors have often piled into these funds at precisely the wrong time (The final exhibit features a recent example), only to be disappointed. Investors mulling thematic ETFs should think long and hard about whether a theme has durable investment merit or if it is a mirage.

BEN JOHNSON is director of global exchange-traded fund research for Morningstar. For more insights from Morningstar, take a look at a few more of the recent articles below:

Is market-cap indexing a form of momentum investing?

Active versus passive in Europe is no contest