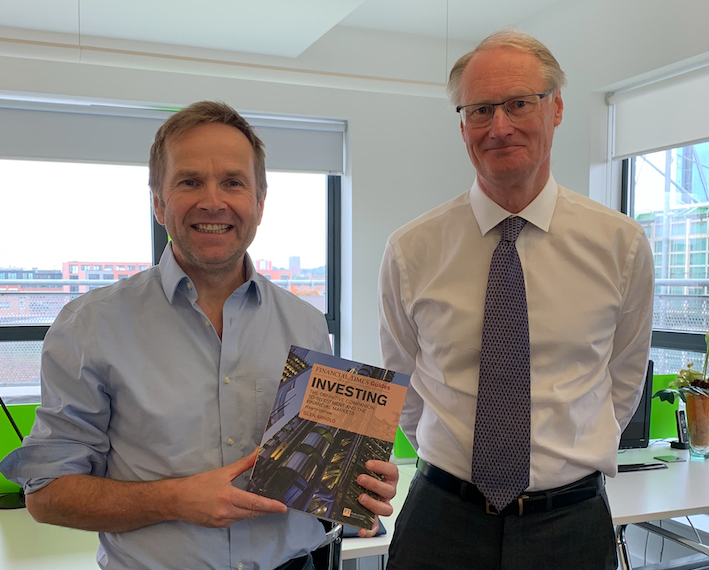 It’s a fact of life that economic shocks are never too far away. Yes, we’re still recovering from the last one — the COVID-19 pandemic. But that doesn’t mean to say there isn’t another shock just around the corner.

GLEN ARNOLD is a full-time investor based in Leicestershire. He’s been a Professor of Investment and a Professor of Corporate Finance, and he’s the author of several books, including The Financial Times Guide to Investing.  He will shortly be managing his own investment fund.

His special interest is in identifying future economic shocks. Rather soberingly, as he explains in this interview, he believes there is greater potential for a shock now or in the near future than there has been since the global financial crisis. When a shock comes, he predicts substantial falls in world stock markets. So what, if anything, should investors do to prepare?

RP: Glen Arnold, your view is that there are several potential shocks to the economy lurking beneath the surface, and that the biggest one is a housing crash. Why are you particularly concerned about the housing market?

GA: House prices have risen tremendously in many countries around the world in the last 12 months or so. That strikes me as one of the great dangers that we are facing as share investors. There are bound to be knock-on consequences. We learned about that in 2007-8, when the housing market in America collapsed and that wiped out a whole load of financial institutions and brought down the American stock market, and markets across Europe and so on. So one potential trigger for a major downturn in stock markets that I see today is in the housing market, or the property market more generally. And that is present in a lot of Western economies right now.

Yes, that’s another potential trigger. The current value of cryptocurrencies is two trillion — or two thousand billion — dollars. The entire British economy is worth about the same. In a year, two trillion dollars is what all the people in Britain produce. So if you suddenly removed what people thought was value, they would get very hesitant about spending. A lot of them will go bust. That would have knock-on consequences for the economy, and it would also have consequences for banks. You may find a lot of banks will go bust when cryptocurrencies collapse, because they’ve lent money to people. They may not have not lent it directly for cryptocurrency speculation, but they’ve lent people money for their houses, or for their business. So you can see how an issue in one sector can have huge knock-on consequences for the rest of the world economy.

You’ve mentioned two main threats to economic stability — cryptoassets and housing. What ar the others?

Another major threat is that the American stock market is not far off its highest level ever. If you take the earnings per share of the average American company and compare them to earnings for the past ten years, you’ll see that the current share price in America is about 38 times the average for the last ten years. That is much higher than it was in 1929, when we had a major crisis. It’s about the same as it was in the year 2000.

But what about the actual trigger that causes those prices to fall? What might that be?

The trigger could be connected to the amount of borrowing that’s going on in the world — particularly corporate borrowing. There’s lending happening right now which goes very, very easy on the borrower. Banks are desperate to lend, and the bond markets are desperate to lend to companies. They’re just taking the money, and there’s hardly any interest being paid on that money, and hardly any security against those loans. That lending will eventually come to a halt, though I don’t know what the trigger will be.

I’m still fully invested, by the way, in UK shares, because in my view UK shares are still fairly priced. But I’m waiting for that trigger to come along, and then I shall really think about whether I should be selling down my portfolio.

You’ve mentioned Britain and the US. There’s been plenty of discussion lately about China, where hares have already fallen sharply. How concerned are you about that?

I’m worried about China with regards to a potential shock. There are two elements there: one is, again, borrowing. There’s very high borrowing, particularly in the property market, in China, and especially by banks and local authorities. They’ve been through a big boom, and a lot of that boom was financed by ordinary people putting money into quite speculative ventures. Then there’s the potential of the Communist Party to misunderstand capitalism, basically. The Communist Party is currently trying to rein in capitalists — they’re attacking all sorts of sectors — and the danger is you’re suddenly going to get a loss of confidence. The Chinese economy is so big relative to the rest of the world that, if you get a major upset there — say, shares halving or banks going bust  — that will ricochet around the world. There will be bad debts and economic downturns around the world.

As I say, the American stock market has never been as high except 1999-2000. So that means investors are assuming a lot of good news; they’re assuming things are going to go really well over the next ten years, that there aren’t going to be any major upsets, and they’re willing to accept less than a three per cent earnings yield. So if you invest a dollar, you expect a three per cent return on that dollar in equities. Now equities are risky things: the mood could change just like that. People might one day say, “Three per cent isn’t enough for the risk I’m taking.” They might be investing in Facebook, and there could be new regulations which affect Facebook. Or they could be investing in Apple, and if they haven’t come out with a decent iPhone for a couple of years, they’ll ask, “Do I really want to take all this risk just to get a three per cent earnings yield, and less on my dividends?” People will think, “I really should be getting six per cent to take that risk”.

So suddenly the stock market could halve, and that would have serious consequences because lots of people are geared up. In other words, they’ve borrowed in order to invest in the stock market, or they’ve bought derivatives that suddenly go down to zero.

You paint a grim picture, and from what you’re saying, all investors will be affected, regardless of what they’re invested in. What can ordinary investors do to alleviate any concerns they might have?

The best thing to do is to bias your investments towards those sectors that are still reasonably priced. I would advise not putting a great deal of money into the American stock market, or into those sectors that everybody is very excited about at the moment. That’s good advice generally: if everyone’s excited about something, it’s probably overpriced already. If it’s the next big thing, and you’ve got every newspaper talking about it, it’s probably not worth looking into at all.

In my view there are sectors, and parts of the world economy, that are still reasonably priced. The UK is an example, because Brexit depressed the stock market, and then we’ve had COVID. So the UK stock market is still below where it was 12 years ago, and I’m still quite sanguine about the UK stock market as a relatively safe haven. Even if there were major crises — in China or America, say — then I’m reasonably OK with the UK businesses I’ve bought into.

Finally, I’m guessing that, as a financial educator, you would also recommend that people diversify and don’t overstretch themselves in any one direction?

Definitely diversify. Make sure you’ve looked after the crucial things in your life, like your house. Do not speculate in the stock market if it potentially means sacrificing your house. Make sure your insurance is sorted out and your pensions are sorted out. And as for investing in shares and unit trusts and so on, only do that with money that you can afford to lose.

The bottom line is that you could lose all your money. Now, we’re not expecting people to lose all their money, but it worries me that people aren’t following good advice. They hear of spectacular returns in cryptocurrency or whatever, and they’re going after it with money that they can’t afford to lose. So that would be my advice. Go easy!

You can read more about GLEN ARNOLD on his website.

Book-to-market: Is its explanatory power declining?

Why young investors should embrace EBI

Which country will outperform next is irrelevant