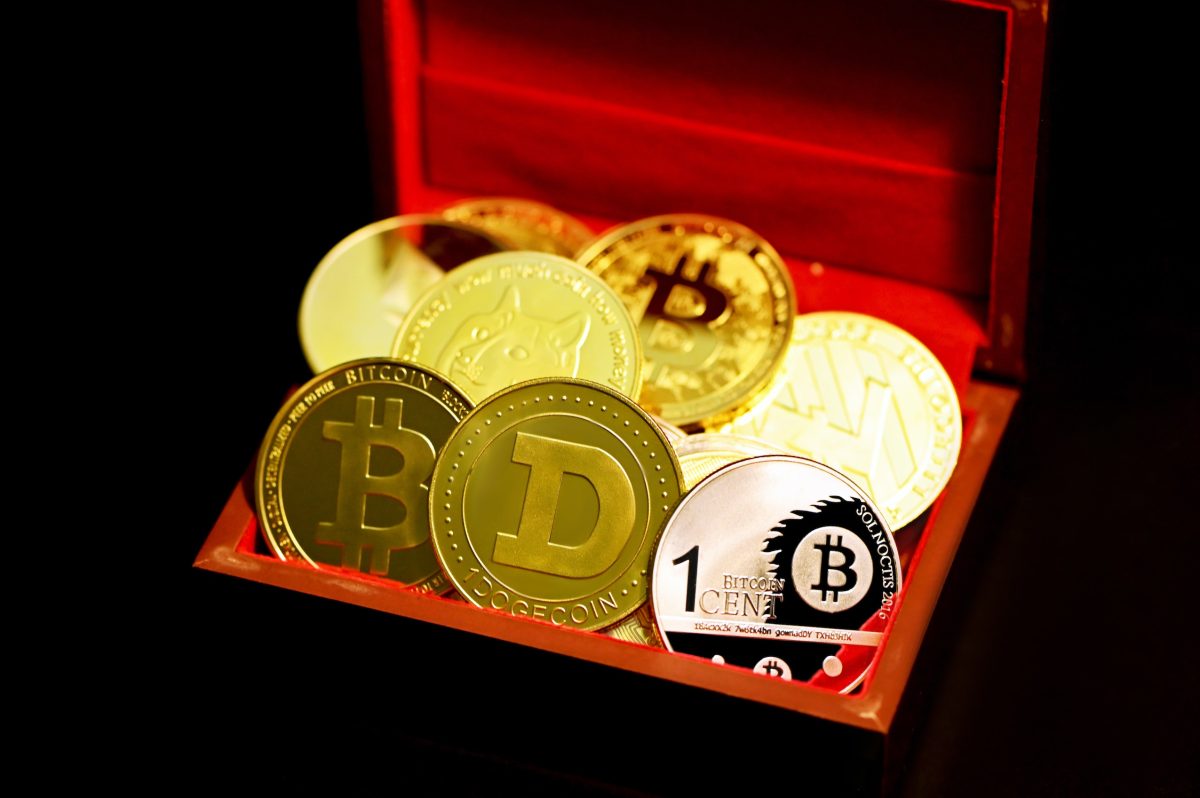 Since their introduction in 2008, cryptocurrency markets have experienced both multiple, massive bull markets and devastating drawdowns, periods of both euphoria and despair, and fear of missing out (FOMO). For example, bitcoin, which traded at just $0.09 in 2010, reached a peak of almost $69,000 in November 2021, and  it’s currently trading at around $22,000 — a drawdown of about 68 percent. 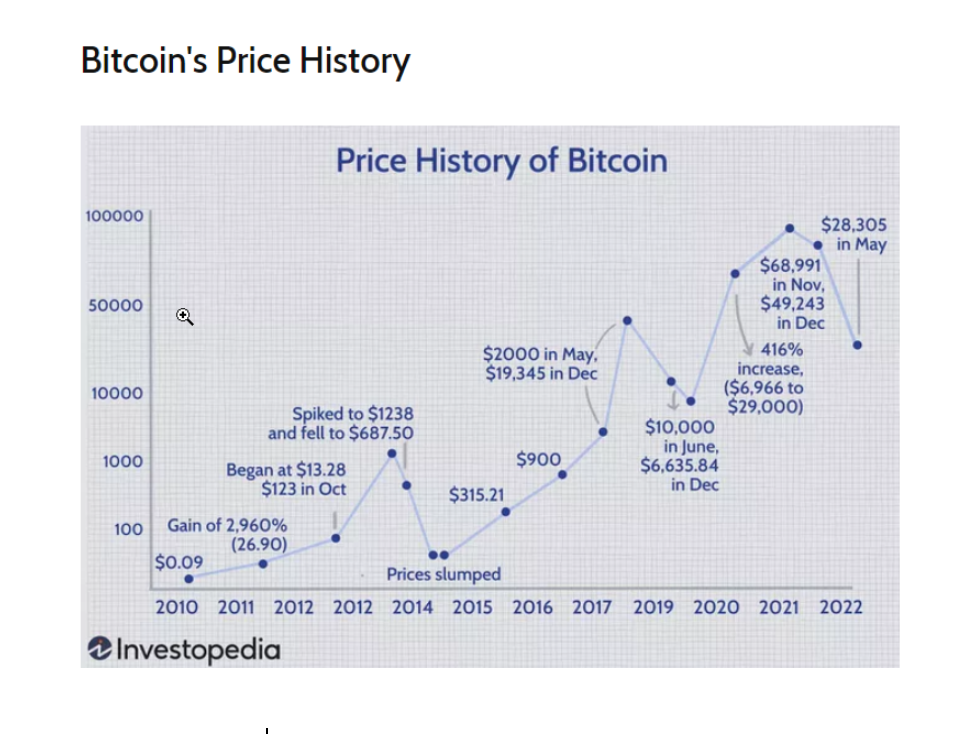 Because their value is not guaranteed by a government, their digital nature means the purchase and use of cryptocurrencies carry high levels of risks — not just market risk, but liquidity risk, security risk, regulatory risk and fraud risk. That is why many investor alerts have been issued by the Securities and Exchange Commission (SEC), the Financial Industry Regulatory Authority (FINRA), the Consumer Financial Protection Bureau (CFPB) and other agencies.

The kind of volatility that is typical of speculations, not investments, and all the warnings from regulatory agencies, raises the question: Who are the buyers of cryptocurrencies? Brett Martin, Polymeros Chrysochou, Carolyn Strong, Di Wang and Jun Yao, authors of the study Dark Personalities and Bitcoin®: The Influence of the Dark Tetrad on Cryptocurrency Attitude and Buying Intention, published in the April 2022 issue of Personality and Individual Differences, sought to answer that question and determine why people want to buy cryptocurrencies. Their hypothesis was that price volatility (i.e., potential gain) and autonomy from government oversight make crypto attractive to that subset of buyers who are prone to gambling and are suspicious of government. That led them to focus their research on examining the effects of the dark tetrad traits (Machiavellianism, subclinical narcissism, subclinical psychopathy and subclinical sadism) on a person’s crypto attitude and buying intention. The following mediators were examined as reasons for people buying crypto: (1) conspiracy beliefs (e.g., distrust of government), (2) positivity and (3) FOMO. Specifically, they examined the effects of: 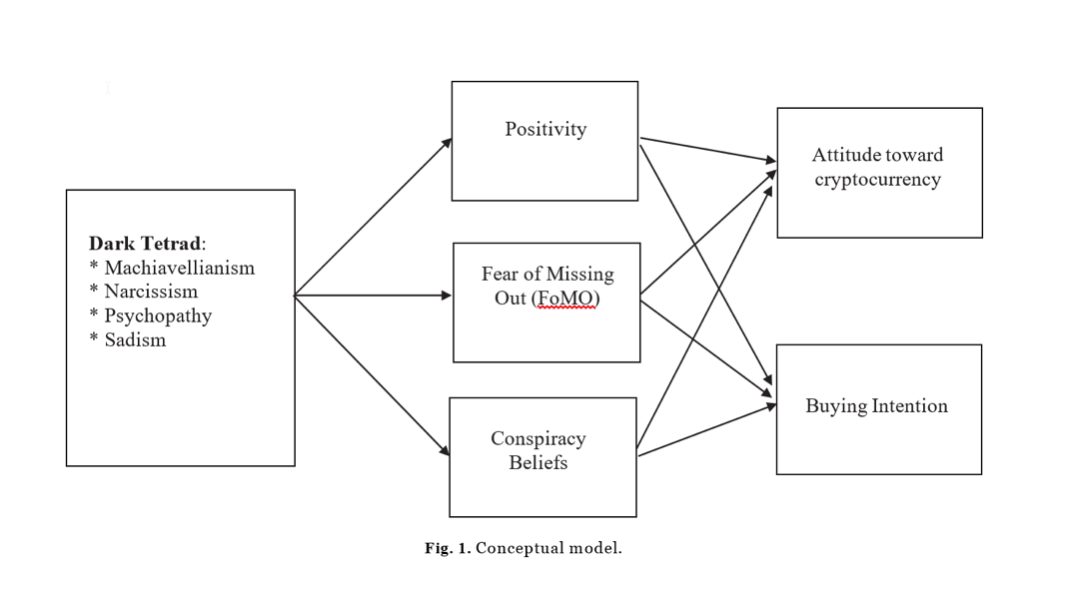 Their database of 566 participants (females, 63.3 percent; mean age, 31.1 years) was drawn from Prolific Academy, “the world’s largest crowdsourcing community of people who love science.” They stated: “The final sample size was adequate for testing the proposed model.” Attitude towards cryptocurrency was assessed with three items (bad/good, unfavourable/favorable and negative/positive), and buying intention was assessed with three items (unlikely/likely, unfavourable/favourable and negative/positive). All items were measured on a 7-point scale. They assessed the Short Dark Triad based on the 2014 study Introducing the Short Dark Triad (SD3): A Brief Measure of Dark Personality Traits. The scale consisted of three constructs, each with nine items: Machiavellianism, narcissism and psychopathy. All items were measured on a five-point agreement scale (1 = strongly disagree; 5 = strongly agree). Sadism was measured based on the assessment of the Sadistic Personality Scale (nine items) based on the 2017 study The Assessment of Sadistic Personality: Preliminary Psychometric Evidence for a New Measure. The items were measured on a 5-point agreement scale (1 = strongly disagree; 5 = strongly agree). Following is a summary of their findings:

Their findings led the authors to conclude: “The high risks and high potential returns of crypto trading make it attractive to the kind of people who like gambling. They added that the fact that cryptocurrencies are not issued or backed by governments like traditional or ‘fiat’ currencies makes them attractive to people who distrust government.”

The most interesting, and surprising, finding was that while investors were drawn to cryptocurrencies in the hope of lottery-like returns — which I would have guessed was the primary motivator — much of the motivations had little to do with money. Instead, they were related to the personality traits of the Dark Tetrad: Machiavellianism, narcissism, psychopathy and sadism.

While noting that they were not suggesting all crypto buyers have Dark Tetrad traits, Martin, Chrysochou, Strong, Wang and Yao found that studying cryptocurrency through the psychological lens of the Dark Tetrad offered insights into why people want to buy crypto. With that in mind, you should consider their findings to determine if they identified the reasons you want to own this highly speculative asset. If you already own Bitcoin or other crypto holder, you should consider if you exhibited any of the traits the authors identified when you made the decision. And in case you are wondering whether you have traits of Machiavellianism, narcissism or psychopathy, you can take an online assessment.

Cryptocurrencies are highly speculative, and investors should weigh their associated risks before including them in their portfolio.

For informational and educational purposes only and should not be construed as specific investment, accounting, legal, or tax advice. Certain information is based upon third party data which may become outdated or otherwise superseded without notice. Third party information is deemed to be reliable, but its accuracy and completeness cannot be guaranteed.  By clicking on any of the links above, you acknowledge that they are solely for your convenience, and do not necessarily imply any affiliations, sponsorships, endorsements or representations whatsoever by us regarding third-party websites. We are not responsible for the content, availability or privacy policies of these sites, and shall not be responsible or liable for any information, opinions, advice, products or services available on or through them. The opinions expressed by featured authors are their own and may not accurately reflect those of Buckingham Strategic Wealth® or Buckingham Strategic Partners®, collectively Buckingham Wealth Partners. LSR-22-323