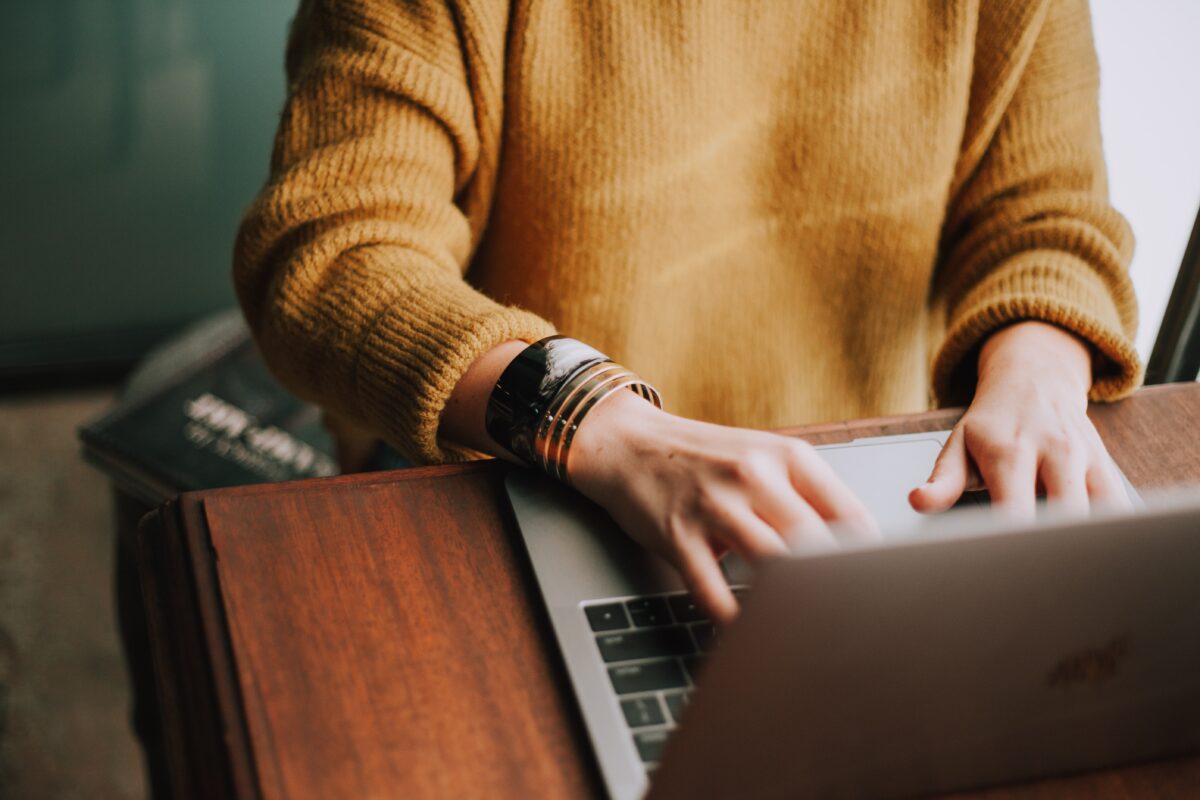 I was very moved by an article in today’s FT (which is free to read) about the suicide of a student day trader Alex Kearns. Alex, who was 20 and from Illinois, left a note for his family saying “I had no clue about what I was doing”.

Tragically, it seems he hadn’t lost anything like as much money as he thought he had. But large numbers of young people are losing significant sums in the recent boom in retail online trading.

The bottom line is that day trading isn’t a video game. Nor is it a way to “earn money” at a time when students are struggling to find alternative sources of income. Day trading — if you aren’t being paid a salary to do it — is plain and simple gambling. Sooner or later, you’re likely to lose.

But why are we seeing so many people trying it? And what should we make of sites that offer free trades? NICK MAGGIULLI for one is doubtful whether the growth of online trading is good for society at large.

I got an unsolicited text from my cousin one week ago:

Your free stock is waiting for you!  Join Robinhood and we’ll both get a stock like Apple, Ford, or Facebook for free. Sign up with my link.

With those three firms seeing a 106% increase in new account opening compared to last year, we seem to be entering a new age for retail investors with Robinhood at the helm.

Why the boom in retail trading?

The best explanation I have read for the recent surge in retail investing comes from Marc Rubinstein, who sees it as a pivot from sports betting. He states:

The demographic of Robinhood’s customer base is similar to that of a sports bettor. Men aged 25-34 are the segment most likely to bet on sports on a regular basis. According to Deloitte 43% of North American men aged 25-34 who watch sports also bet on sports at least once per week, and that’s the same group that has flocked to Robinhood.

With the lack of live sports to bet on because of COVID, the pent up demand has turned to the stock market. And no individual has demonstrated this pivot from sports to stocks better than Dave Portnoy of Barstool Sports fame.

I started documenting Portnoy’s tiptoeing into stocks back in late March and in less than three months he has become one of the most influential people in all of financial Twitter. And what kind of stocks is Dave trading?

The same thing that my cousin was trading. Mostly airlines and cruise lines. And I understand why.

With some major airlines and cruise lines up over 90% in the last month compared to only an 8% gain for the S&P 500, the fear of missing out is very real: 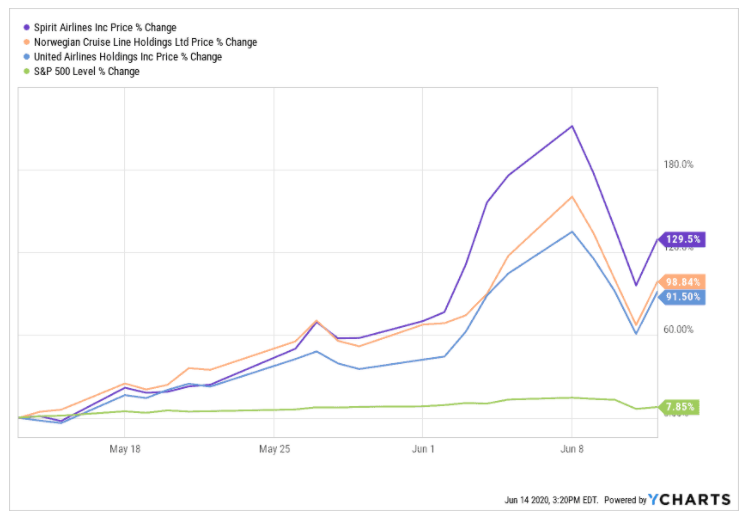 Thanks to Robintrack, we can also see that Robinhood traders are piling into companies like Hertz, which recently filed for bankruptcy:

And electric vehicle maker Nikola, which currently has $0 in revenue and was briefly valued more than Ford:

While this behaviour might seem dumb at first glance, it can be deemed rational if we assume that many of these Robinhood traders are just trying to make a quick buck before passing the bag to someone else. It’s like a game of musical chairs with stocks. Even Hertz is getting in on the action after a bankruptcy court ruled that it could issue $1 billion in “potentially worthless” equity to aid in its restructuring efforts.

Some day traders will always outperform

Though it might seem like I am trying to make fun of Robinhood traders for their rash behavior, the fact remains that a good chunk of them are going to beat me (and you) in this market. And the last time I checked, money doesn’t care how it was earned, whether by luck or skill, or by indexing or day trading.

For example, David Perell, one of my best friends from Twitter, has outperformed me by about 15% a year over the past five years despite never studying investing. What’s his secret? While bored at his summer internship a few years ago, David decided that he should put half of his money in Facebook and half in Netflix because they seemed like good companies.

Fast forward to today and that allocation (which he never traded or rebalanced) has beaten the Russell 3000 by about 15% a year. 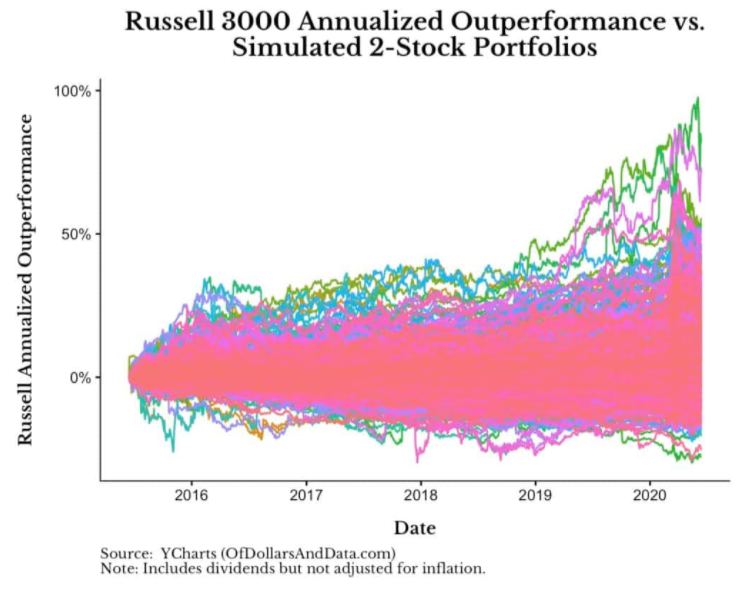 Less than 2% of portfolios above would have performed as well as David’s “I’m Bored” portfolio.

And 33% isn’t 0%! So while I do enjoy poking fun at some of the antics of Robinhood traders, I also have to respect their willingness to defy the odds. Given that only about 1 in 20 day traders remain profitable in the long run, it is even more impressive when one of them succeeds, whether by luck or skill.

This is why I have to give props to David for beating me over the past five years, because, despite his luck, he still had to hold on for all these years. He still had to not sell even when it looked tempting. He still had to take the risk, and that earns my respect.

However, for every David, there is another trader that was not so fortunate. A recent analysis by Barclays said that the top picks of Robinhood traders went on to underperform the overall market, not the other way around. Therefore, we must ask: Is the renewed interest in the stock market good for the investment community?

Is Robinhood good for society?

Regardless of how you feel about Robinhood traders, Robinhood the company has done a lot to reduce trading commissions across the industry. My first blog post ever focused on the harmfulness of high fees over time, so any company that has helped to reduce fees for retail investors has done them a great service.

However, Robinhood is still a tool like any other tool. While you can use it to buy index funds, you can also use it to day trade on margin to disastrous consequences. Unfortunately, one member of the FinTwit community recently learned this after one of their family members took their own life as a result of Robinhood trading gone wrong.

As I have since learned, apparently this was an issue where the Robinhood interface was showing the young trader owing money that he didn’t actually owe. The stress from this misunderstanding, unfortunately, became too much for him to bear.

When I hear stories like this I debate whether the newfound interest in the stock market is a net positive for society. While some people will benefit from this experience and some will get harmless entertainment, I worry about those looking to get rich quick.

Remember that Robinhood text my cousin sent me last week? Well, it wasn’t the first one he sent this year.  He sent me one back in February where he literally asked me “any recommendations on how to get rich quick?”

I told him that there was no such thing and tried pointing him in the right direction, but he wasn’t having it,

In fact, if there is anything I have learned from giving advice online over the last few years, it’s that some people don’t really want advice.

Some people don’t want to be saved.

If you’re currently day trading — whatever your age — and you’re worried about the risk you’re taking, please take a complete break from it NOW. Think carefully about what you’re doing. Talk to a friend or family member you really trust. If necessary, seek professional help.

You’ll find plenty of information on this website about how to invest properly. This video series by Andrew Hallam is a good place to start:

How to become a millionaire, Part 1

How to become a millionaire, Part 2

How to become a millionaire, Part 3

How to become a millionaire, Part 4

How to become a millionaire, Part 6

You might also want to look at our series Back to Basics:

Here are some more articles we think you’ll find interesting:

No emergency fund? Start one now

Pension saving — the sooner you start the better