Every year, it seems that there is a new argument against index funds. Investors can almost count on someone in the industry making the news with a criticism or a warning about why they are not a good idea.

Towards the end of 2019 it was hedge fund manager Michael Burry, whose shorting of the US housing market before the great financial crisis was the inspiration for the 2015 Oscar-winning movie The Big Short. He called passive investing a bubble that was distorting stock prices.

A few years earlier analysts at brokerage firm Sanford C. Bernstein & Co. released a note that argued that passive investing “worse than Marxism”. Index funds would, they said, undermine the entire system of capitalism and the the market dynamics upon which it relies.

A history of contempt

This antipathy is not new. A large segment of the investment industry has found the idea of passive investing galling from the start.

When Vanguard launched its first index fund in December 1975, it was greeted with derision. The industry couldn’t believe that any investor would want to indiscriminately invest in a whole basket of stocks without caring about their fundamentals.

Why, critics wondered, would anyone accept the mediocre returns that this approach seemed guaranteed to produce? Wasn’t it self-evident that a fund manager picking stocks would do better than mindlessly following an index?

One of the most famous examples of the scorn directed at passive investing is from the 1980s. Investment research firm The Leuthold Group sent out a poster to its clients with the slogan: “Help stamp out index funds! Index funds are un-American!” 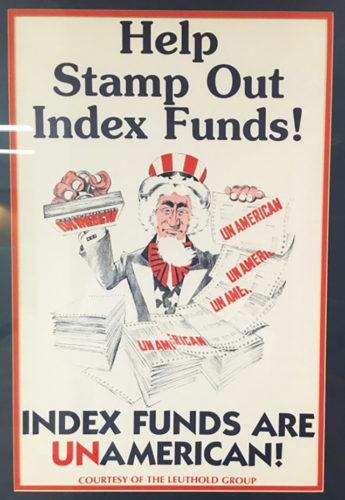 Alex Matturri, the retiring CEO of S&P Dow Jones Indices, remembers how passive funds were disregarded by the majority of the industry in those early days. Those involved in indexing weren’t taken seriously.

“In the index space everybody knew each other – it was kind of like a club,” he says. “Even if you competed with each other, it was a small community because you were the outsiders.

“The view for a long time was that it was stupid,” Matturri adds. “Fund managers thought that surely they are smarter than an index. But the maths always proved that this is not the case.”

The overwhelming evidence is clearly that the majority of active funds struggle to beat a broad market benchmark. The latest S&P Indices Versus Active (SPIVA) scorecard shows that only a third of active managers in the UK out-performed the S&P UK BMI Index over five years, and just over a quarter managed to do so over 10 years.

The simplicity of index funds has therefore proved to be deceptive.

However, while index investing has grown substantially in some parts of the world, most obviously in the US, there is still a reluctance to move to passive in many markets. This, Matturri believes, is because of vested interests in the industry.

“A great example is Canada,” Matturri notes. “It has some of the highest cost mutual funds out there, yet Canadian investors have easy access to the US market. There are all these really cheap products in the US, but just north of the border the market is still dominated by high-priced active products that under-perform.”

The reason is that the Canadian financial advice market is dominated by banks that make a lot of money off the commissions they earn from selling high-priced funds.

“But there will be a breaking point,” Matturri predicts. “In the US it happened naturally with the advent of independent advisers that provided services for a fee rather than a commission, and in some other markets regulation is forcing the issue. We’ve seen it in Australia, and you kind of see it in the UK and Europe where if you have products that charge high fees you had better deliver some value for those fees.”

The value of independence

As investors become more informed, they are also becoming more aware of these conflicts. Increasingly, they are appreciating the importance of advisers who are truly independent.

Those advisers who don’t rely on the commissions from high cost funds and are genuinely interested in ensuring the best long-term outcomes for their clients won’t ignore the compelling arguments in favour of passive investing.

In the past, this might have earned them some ridicule from others in the industry. However, as time passes and index investing continues to prove its value, the outsiders are becoming mainstream.

If you are interested in reading more of his work, here are his most recent articles for TEBI:

How much should the economy matter to stock market investors?

So you think you can pick winning stocks?