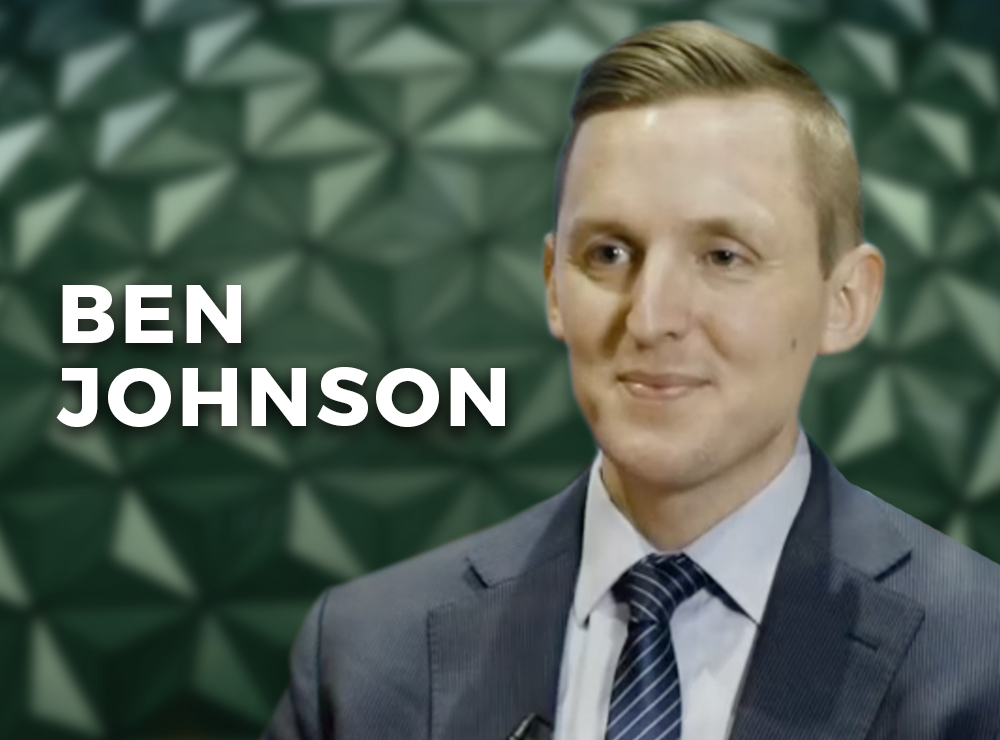 Whisper it gently: value funds have been on a little winning streak. That’s right, we haven’t said that for a long time. So, is this the start of a sustained comeback for the value premium? Or is it a false dawn? Or are most investors better off not worrying about growth and value at all? Morningstar’s BEN JOHNSON has been weighing up the evidence.

After a long, dark, cold winter, green shoots have emerged across the landscape of systematic value strategies — those that buy stocks that are cheap relative to some fundamental measure of their worth. Exactly what has plagued these approaches for so long has been widely debated. And while the recent thaw has been welcomed by many long-suffering value disciples, even some of the factor’s biggest fans worry that it may be a false spring.

Here, I’ll look back at value’s cold streak, survey some of its potential causes, touch on the catalysts behind its turnaround, and explore whether there’s any value left in value today. 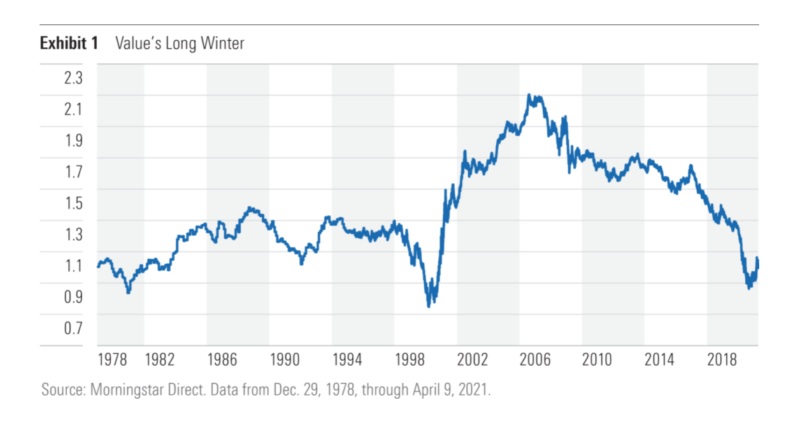 Academics and practitioners have published numerous studies attempting to explain why value stocks have underperformed their faster-growing and more richly priced counterparts for so long. Some have argued that traditional measures of value like the book value of equity are no longer a reliable gauge of companies’ worth, as modern enterprises’ assets skew away from plant and equipment, and toward intellectual property and goodwill. Others have tried to peg value’s woes on interest rates, arguing that low rates are better for companies whose best days and biggest cash flows are further out in the future. These stocks’ premium multiples may be justified by lower discount rates on those further-out cash flows, which boost their present value.

Another narrative — one that may be familiar to those who lived through the dot-com bubble — is that value stocks are systematically short innovation. By focusing on accounting measures for stock selection, they’re driving using the rearview mirror, favouring old industry, and failing to see and participate in all the disruption that is coming down the road.

If you ask me, most of these arguments hold little water. The factors affecting stock prices and the relative performance of those stocks trading cheap in relation to accounting measures and their more glamorous counterparts are too numerous to count.

The manner in which these factors interact is complex. It is impossible to predict how they will conspire to move markets ahead of time. And it is easy to try to explain how they affected prices with the benefit of hindsight and mounds of data.

Amid all this complexity are two relatively simple factors that I believe explain most of value’s woes: fundamentals and people. For most of value’s long drought, it deserved to be left in the dust by growth. This is because growth stocks’ earnings grew at a much faster rate during most of this period. But the difference in earnings growth rates has narrowed. That’s where people come in. When I say “people” I am referring to investor behavior, animal spirits, all those touchy-feely factors that have driven many a market mania and panic over the years. This is evidenced in the expansion of growth stocks’ multiples relative to the going price for value stocks.

Exhibit 2 depicts the ratio of the price/earnings multiple for the Russell 3000 Growth E Index to the price/earnings multiple for the Russell 3000 Value E Index. By definition, growth stocks tend to garner higher multiples relative to value stocks. But that premium has spiked higher in the past few years. Investors have thrown valuations to the wind, paying up for the market’s fastest-growing names. 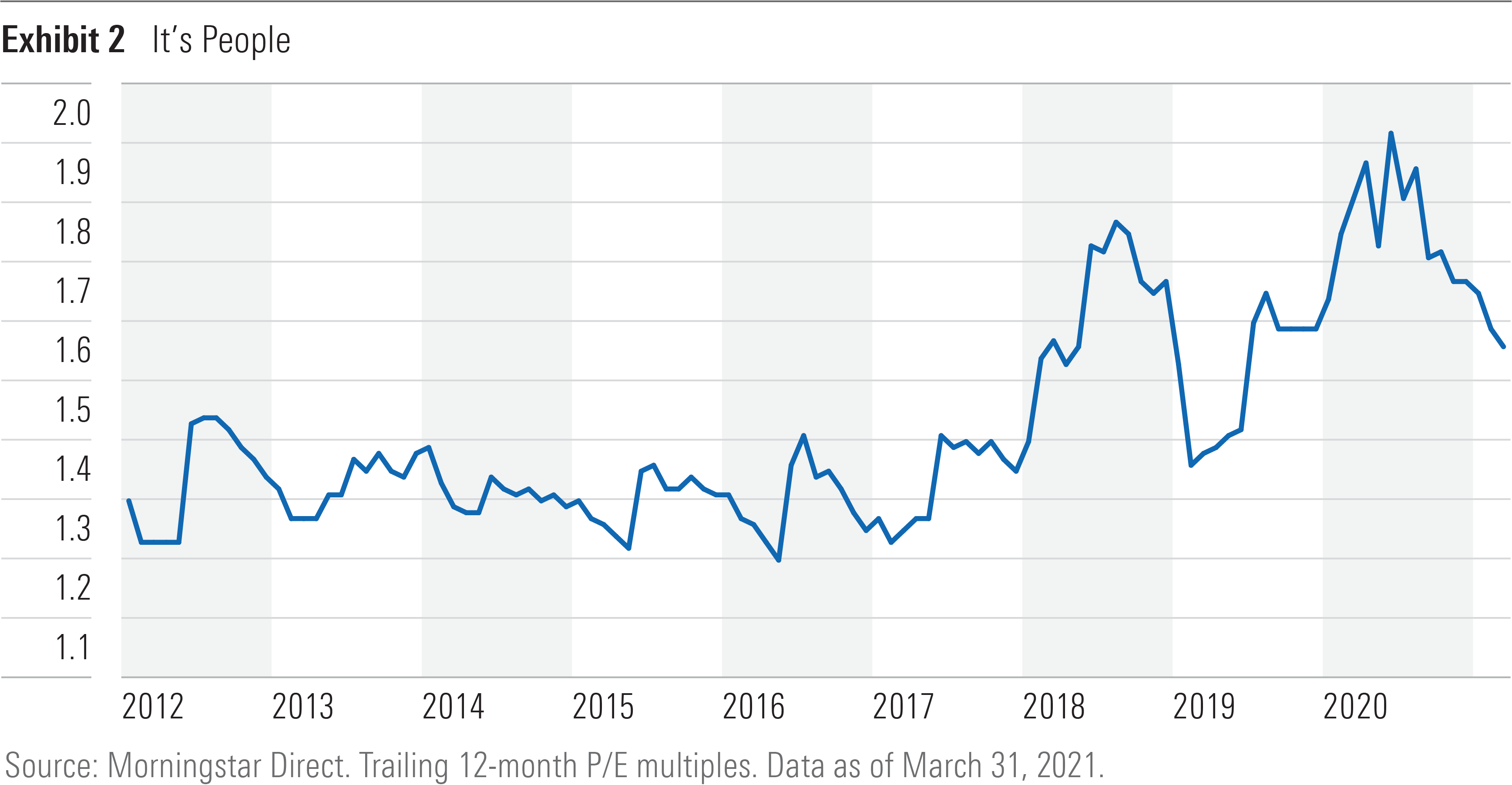 Value has bounced back, but it might be too soon to call it a comeback. From Sept. 1, 2020, through April 11, 2021, the Russell 3000 Value Index gained 30.52%, while the Russell 3000 Growth Index posted a relatively modest 14.39% return. Favorable stock exposure in the financials, industrials, and information technology sectors explain much of the value benchmark’s outperformance over this stretch. Top stock contributors include a number of names that stand to benefit from the gradual reopening of the global economy following a year that saw most of the world locked down. These stocks include JPMorgan Chase (JPM), Disney (DIS), and ExxonMobil (XOM).

But while some are heralding a comeback, driven by a strong fundamental outlook for value stocks as the world gets back to normal, others are worried it may just be a junk rally. Take the performance of Invesco S&P 500 High Beta ETF (SPHB) as an example. The fund sweeps in the 100 S&P 500 stocks that are most sensitive to the market’s movement–a proxy for low quality. Indeed, the fund scores poorly on a number of quality metrics relative to those tracking its parent index. From Sept. 1, 2020, through April 11, 2021, SPHB outperformed iShares Core S&P 500 ETF (IVV) by 34 percentage points. Subpar stocks have posted above-average returns. There may be some merit to the argument that value’s comeback is a head fake.

Is value actually a value?

Whether value stocks’ run will continue is anyone’s guess. From the beginning of April through April 11, growth stocks had gained back some lost ground. What we can readily observe is whether there’s any value left in value stocks. Exhibit 3 features the Morningstar price/fair value estimate ratios for a selection of Morningstar Medalist exchange-traded funds that are good proxies for U.S. and developed international stocks as well as the value and growth camps in each of those markets.

No matter how you slice the U.S. market, stocks look more than fully priced. The trio of iShares Core S&P Total U.S. Stock Market ETF (ITOT), iShares Russell 1000 Value ETF (IWD), and iShares Russell 1000 Growth ETF (IWF) were all trading well above their fair value estimates as of the close of trading on April 9, 2021. While IWD’s price/fair value ratio was slightly lower than IWF’s, the value is only relative. Of the six ETFs featured here, only iShares MSCI EAFE Value ETF (EFV) was trading at a discount to its fair value estimate, albeit a slight one. If there’s any value to be had among value stocks, investors are going to have to be choosy. As proxied by these ETFs and measured by Morningstar’s fair value estimates, value stocks, growth stocks — really almost all stocks — don’t appear to offer much value at the moment.

Is it worth it?

After years of underperformance and anguish, many investors in systematic value strategies could rightly ask whether the juice is worth the squeeze. While any successful investment strategy involves prolonged periods of underperformance, value’s latest stretch has been especially long in duration and large in magnitude. The rebound in value stocks could mark the onset of a long, bright, warm summer. Or it could be a false spring. The only certainty is that seasons change. There could be a lesson for investors in the long-term performance of the Russell value and growth indexes. From their December 1978 inception through April 11, 2021, the value index gained 12.09% annually while the growth index gained 12.11% per year. At face value, long-haul investors in either arrived at essentially the same destination.

Late Vanguard founder Jack Bogle often made similar observations regarding the first value and growth index funds the firm launched under his watch. Of course, the path to these remarkably similar returns has been long and winding, and the figures are very sensitive to one’s choice of starting and ending points. But the point is that over a long enough time horizon, value and growth are essentially two sides of the same coin. Value stocks may or may not be cheap today. Growth stocks may or may not prove to have been a good value — despite sporting higher multiples — at some point down the road. As Berkshire Hathaway vice chairman Charlie Munger said, “All good investing is value investing.” Rather than flipping that coin at regular intervals, tilting between value and growth, most investors would be best served to own a total stock market index fund with a Morningstar Analyst Rating of Gold like Vanguard Total Stock Market Index ETF (VTI) and leave to others the coin-flipping and all the anxiety it brings.

BEN JOHNSON is director of global ETF research for Morningstar and editor of Morningstar ETFInvestor, a monthly newsletter. This article was first published on the Morningstar blog. 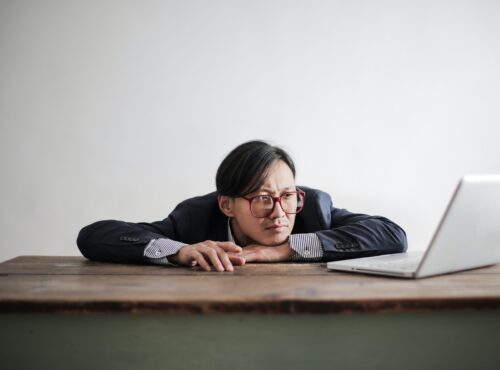 Mention the value premium to investors and chances are their eyes will glaze over. Most have...

By LARRY SWEDROE   One of the great debates in finance has been whether the source of...

By LARRY SWEDROE   One of the more common mistakes made by investors in index funds, and... 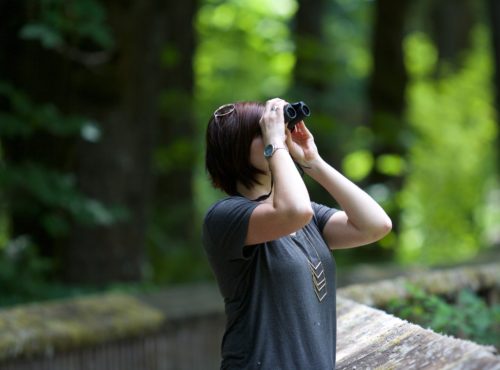