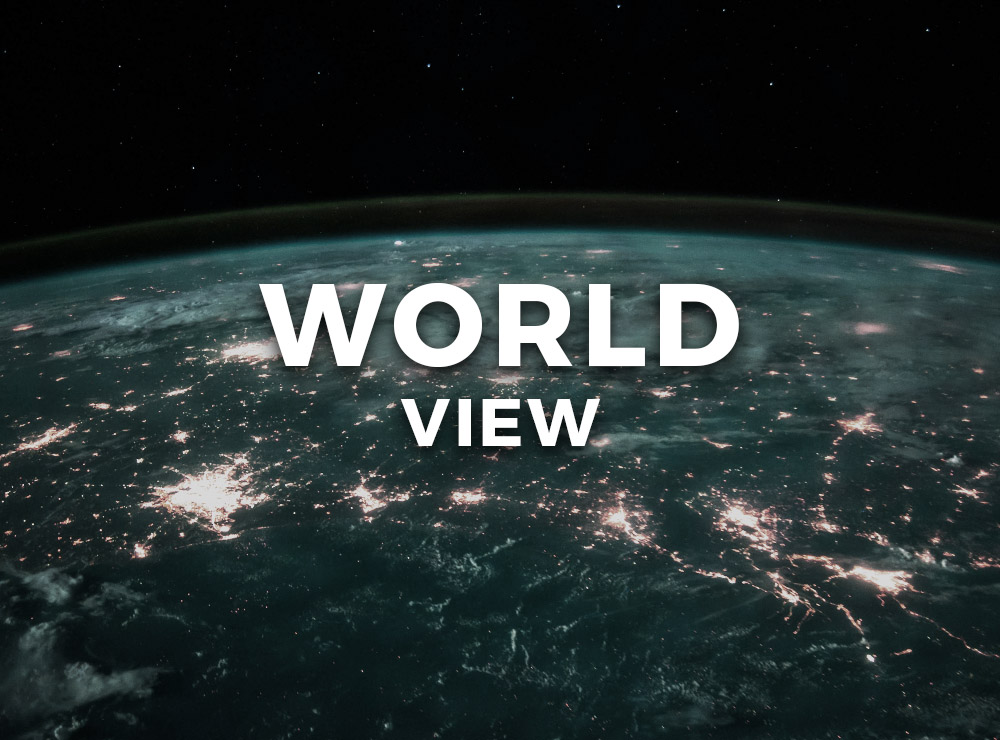 The start of a new calendar year tends to draw out the forecasters. People are naturally curious to know about what the future might hold. But the list of uncertainties appears to be particularly long as we head into 2022 – starting with the path of the pandemic, but also encompassing inflation, central bank policy, climate change and geopolitics.

Events in early 2020 humbled even the most careful forecaster. After a solid start to the year in global equity markets, prices went into dramatic reverse in March as the reality of the pandemic hit. Major indices fell by 30% or more in the space of weeks.

Assiduously compiled projections and forecasts made only weeks before were quickly shredded. Assumptions for global growth, inflation, investment, unemployment and dozens of economic and market variables were rapidly unwound.

As it turned out, the world economy quickly recovered, although with the exception of the US, not to the levels prevailing before COVID. Equity markets, after their savage decline, rebounded in equally dramatic fashion to reach record highs.

Two years later, and with the pandemic still raging, who can blame forecasters for seeking to hedge their bets about 2022? After all, hopes have been raised repeatedly, and then dashed again, as new variants emerged. For central banks seeking to withdraw emergency stimulus, there are questions also about where to strike a balance between heading off resurgent inflation and keeping the recovery alive.

For investors faced with this storm of uncertainty, there is little alternative but to stick to the basic principles of diversification and discipline – staying focused on their goals, maintaining a reserve of cash and resisting the urge to respond to information that is already reflected in market prices.

But that doesn’t mean one shouldn’t seek to stay informed, regularly reviewing the risks to the outlook and maintaining flexibility where needed. As always, this should be done in consultation with a professional adviser.

In the meantime, here is a brief summary of the state of play as we enter the New Year.

For all the doom and gloom around, world economic output continues to grow. According to the Centre for Economics and Business Research (CEBR), a UK-based think tank, global GDP will rise 4% this year to surpass $US100 trillion for the first time.

Separately, the International Monetary Fund in October projected a more robust 4.9% global growth rate in 2022, although this forecast was made before the appearance of the Omicron variant and the disruptions resulting from it. 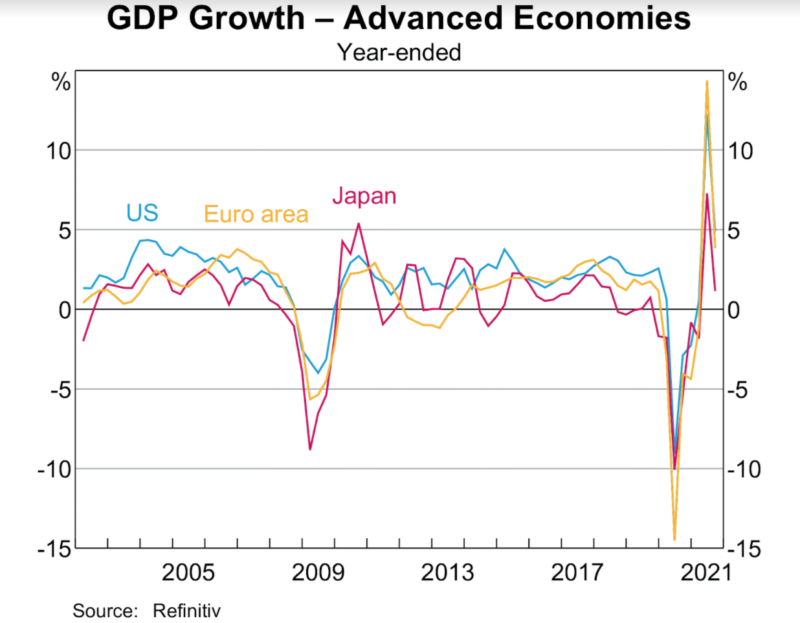 The wild card, according to most forecasters, is the path of resurgent inflation. This is most pronounced in the US, where the headline CPI soared by 6.8% year-on-year in November, its largest annual gain since 1982. In the UK, inflation jumped to 5.1% in the same month, its highest rate in more than 10 years.

“The important issue for the 2020s is how the world economies cope with inflation,” says Douglas McWilliams, deputy chairman of CEBR. “We hope that a relatively modest adjustment to the tiller will bring the non-transitory elements under control. If not, then the world will need to brace itself for a recession in 2023 or 2024.”

Already, we are seeing policymakers start that adjustment process. In December, the Bank of England became the first major central bank to raise interest rates since the pandemic began, voting 8-1 to lift the bank rate from 0.1% to 0.25%.

In the US, the Federal Reserve, which has already begun reducing its purchases of government bonds, has flagged three quarter percentage point increases in its benchmark overnight rate in 2022, with the first move expected by March. 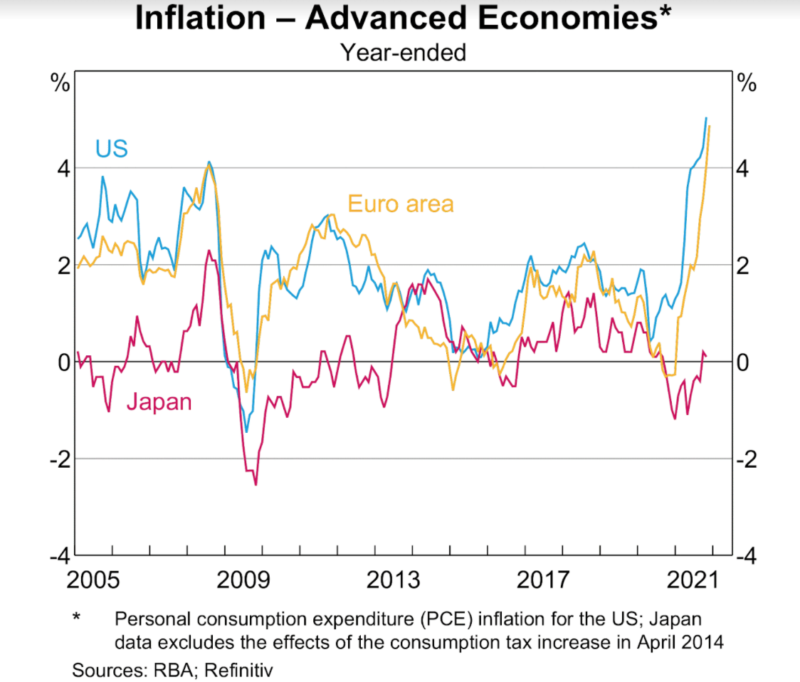 Given the extent to which accommodative monetary and fiscal policies have underpinned markets in recent years, the team at CEBR expect policy authorities will need to tread gingerly in winding back the stimulus.

“We have a hunch that the scale of the policy adjustment might not need to be too great because there will be a significant asset market response,” says McWilliams. “Translated into English, this means we are expecting bond, equity and property markets to fall around the world. The amounts will vary from 10% to 25%. And the timing will also vary and some of the impact will fall into 2023.”

The real economy is also unusually sensitive to the paring of policy stimulus. In its most recent world outlook, the IMF noted that the increases in inflation have been occurring even as employment is below pre-pandemic levels in many economies.

And all this is occurring against the background of multiple challenges – uneven access to vaccines across the world, food insecurity, rising energy costs, ongoing supply disruptions in many areas, climate change and the uncertain path of the pandemic.

“Overall, the balance of risks for growth is tilted to the downside,” the IMF said. “The major source of concern is that more aggressive COVID variants could emerge before widespread vaccination is reached.”

Lastly, there are also geopolitical issues to consider, with the pivotal US congressional mid-terms due later this year and national elections scheduled for France and Australia, among others. Also giving pause are tensions between China and Taiwan, Russia and Ukraine, and Israel and Iran.

The case for hope

As always with any overview of the economic and political outlook, however, it is worth recalling that risks are not tilted in one direction only. And, for this reason, a wise investor will maintain some allocation to growth assets.

In an article for Foreign Affairs, economist Charles Kenny – a senior fellow at the non-partisan, Washington-based Centre for Global Development – provided five reasons to be optimistic about the outlook in 2022.

The first of these is increasing rates of vaccination in the developing world, with as many as one billion doses scheduled to arrive in Africa by March.

The second cause for optimism is the accelerating transition in the world’s energy sources, with the largest increase in global electricity generation from renewables expected in the coming year.

A third reason for hope is democratic India, which as it celebrates the 75th anniversary of its independence this year, is on track to take over from China as the world’s most populous nation.

“After years of hearing that the future belongs to a rising, authoritarian China (a narrative much peddled by the country’s rulers themselves), it will be a much-needed lift for the democracies to see one of their own rising in importance,” Kenny says.

The fourth reason echoes the CEBR view – that after the COVID-led contraction, advanced economies will post 4%+ growth this year. As well, many countries are getting much better at handling economic shocks.

A final reason to stay positive is the progress the world is making in slowing the loss of biodiversity, with advances in modern agriculture improving the productivity of land use and reducing deforestation.

That the world faces major uncertainties in 2022 goes without saying. The threat of inflation, questions over the pace of withdrawal of stimulus, and, most of all, the path of the pandemic make forecasting an even more hazardous occupation than usual.

For investors, it may offer comfort to know that financial markets price these risks constantly as new information comes to hand.

But we also know that risks don’t all go in one direction. We know that the global economy has significantly recovered from the initial shock of the pandemic, that our understanding of the virus is increasing, that vaccinations are increasing globally, and that economic innovation continues in areas such as energy and land use.

Innovation and improved productivity hold out the hope of more sustainable ways of growing and preserving wealth. Investors can share in that by participating in global markets and maintaining a balanced outlook.

None of us know what the future holds. But we can prepare ourselves for whatever happens by focusing on what we can control and maintaining a realistic sense of hope.

A Happy New Year to all!

The reasons why investors stock with losers

Spending decisions that end up costing a million dollars

What impact have new accounting standards had on quant funds?