The poor performance of hedge funds has been well documented. What investors are less aware of is the risk of investing in a hedge fund that becomes distressed and is then subjected to so-called front-running trading behaviour. As LARRY SWEDROE explains, the risk has been highlighted in new research.

One of the most important lessons for investors to learn is that just because there are some investors smarter than others, that advantage will not necessarily show up. The reasons are that the market is too vast and too informationally efficient, and there are costs involved in trying to outperform.

Consider the performance of those superstar investors, hedge fund managers, over the last decade. As you can see in the table below, over the ten-year period ending December 2020, the HFRX Global Hedge Fund Index underperformed every single major equity asset class by wide margins. It also outperformed virtually riskless one-year Treasuries by just 0.4 percentage point, and underperformed intermediate and long-term Treasuries. 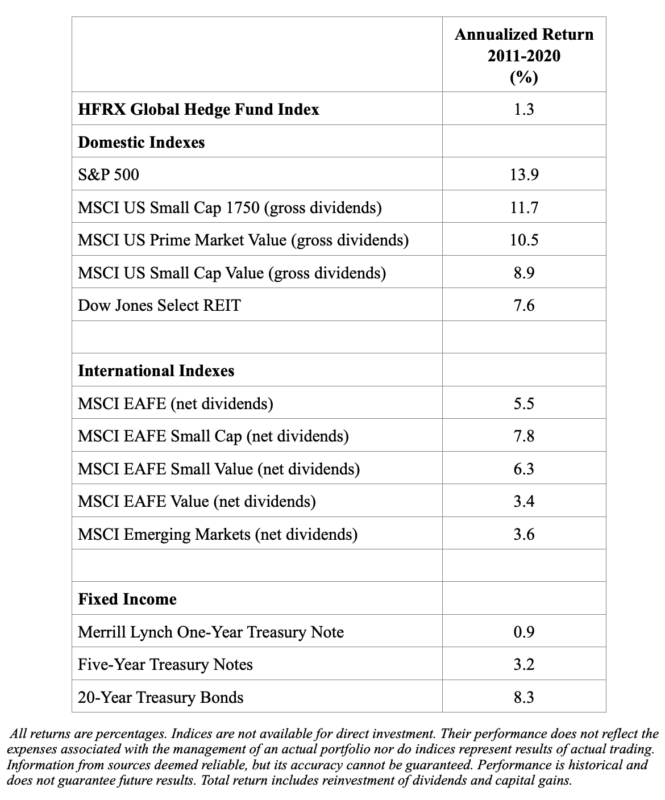 The conclusion you should draw is that while it is possible that hedge fund managers may be investment experts, the presence of special skills is one of the conditions — but not the only one — necessary for success. Trading costs, management fees, administrative fees, incentive fees and tax inefficiency are all costs borne by investors in hedge funds. To make matters worse, investors accept the risks of potentially poor diversification of assets.

Interestingly, at one time hedge funds were able to deliver significant alpha. William Bernstein, author of the mini book Skating Where the Puck Was, examined the returns of hedge funds, applying a three-factor analysis to the Hedge Fund Research global returns series, for the period 1998-2012. Bernstein found that while hedge funds did produce large alphas in the first third of the period, as investor assets chased those returns, alphas shrank and then turned negative. From 1998 through 2002, the hedge funds produced an incredible alpha of 9.0 percent. That performance fuelled the growth of the hedge fund industry. However, from 2003 through 2007, their alphas disappeared, falling to -0.7 percent. And from 2008 through 2012, the alpha became -4.5 percent.

Vikas Agarwal, George Aragon, Vikram Nanda and Kelsey Wei, authors of the July 2021 study Anticipatory Trading Against Distressed Mega Hedge Funds, provided another explanatory factor for the underperformance of hedge funds, one caused by a risk not understood by most investors.

The authors began by noting that “the hedge fund industry provides an ideal setting for the best and brightest investment managers to leverage their investment ideas and be rewarded for investment success. The largest and most successful hedge fund managers are among the world’s wealthiest people and achieve celebrity status. Therefore, perhaps not surprisingly, the trading strategies of such mega hedge fund (MHF) managers are heavily scrutinised by market participants. Public disclosures of MHFs’ stock positions (mandated by regulation) are regularly discussed by the financial media and closely followed by competitors and copycat investors. However, when MHFs suffer a setback or surprising loss that forces them to liquidate assets, their need to liquidate is often known to other traders. This has important implications for financial markets because predicable trading by distressed traders, especially large traders like MHFs, can be exploited by strategic traders in ways that further reduce liquidation values and impair price efficiency. Specifically, given the prospect of distressed selling by MHFs, other traders may rush to sell stocks in anticipation of negative return shocks resulting from MHFs liquidating a large position in response to margin calls or investor redemptions. These anticipatory trading activities can be intensified by the belief that trades by copycat investors that typically follow MHFs’ investments would exacerbate any price impacts of liquidation by distressed MHFs.”

Based on the above, Agarwal, Aragon, Nanda and Wei hypothesised that “front-running” trading behaviour can lead to prices falling further below fundamental values, amplifying the distress of MHFs and causing them even greater losses. They sought to answer the following questions: “Do institutional investors trade in the same direction prior to the anticipated stock trades of distressed MHFs and, in this sense, engage in front-running? Does such anticipatory trading adversely impact distressed MHFs, as reflected in worse portfolio performance? Finally, are stocks that are held by distressed MHFs and targeted for front-running associated with greater price drops and reversals – i.e., are such stocks more prone to prices deviating from their fundamental value?”

Their data sample covered the quarterly stock holdings of MHFs (hedge funds with more than $1 billion in assets under management) and other institutional investors over the 1994-2018 period. They focused on distressed MHFs (defining distressed as returns ranked in the lowest quartile during the quarter and returns below zero), noting that relatively poor performance and losses can trigger redemptions from fund investors and/or margin calls on levered positions that force the MHF to liquidate large positions. In addition, the authors noted that “due to their sheer large size, MHFs’ trading activities can be expected to impact stock prices, motivating other institutions to trade ahead of distressed MHFs.” Further, “MHFs’ portfolio holdings are closely watched by other investors as evidenced by their quarterly 13F filings being downloaded more than twice as often as those of non-MHFs. Consequently, the market impact related to both anticipatory and copycat trading is potentially greater for stocks held by distressed MHFs as compared to distressed non-MHFs.”

Following is a summary of their findings:

Agarwal, Aragon, Nanda and Wei concluded that their findings have important implications for market efficiency not only because such front-running can temporarily destabilise market prices but also because it can adversely impact MHFs that may have the greatest capacity for informed trading. Their findings also reveal another mechanism that can contribute to diseconomies of scale in active management. In addition, they provide yet another explanation for the poor performance of hedge funds (at least that of MHFs), providing investors with yet another reason to avoid investing in them.

Important Disclosure: The information presented here is for educational purposes only and should not be construed as specific investment, accounting, legal, or tax advice. Certain information is based upon third party data which may become outdated or otherwise superseded without notice. Third party information is deemed to be reliable, but its accuracy and completeness cannot be guaranteed. By clicking on any of the links above, you acknowledge that they are solely for your convenience, and do not necessarily imply any affiliations, sponsorships, endorsements or representations whatsoever by us regarding third-party websites. We are not responsible for the content, availability or privacy policies of these sites, and shall not be responsible or liable for any information, opinions, advice, products or services available on or through them. The opinions expressed by featured author are their own and may not accurately reflect those of Buckingham Strategic Wealth® or Buckingham Strategic Partners®, collectively Buckingham Wealth Partners. LSR-21-142

Quality, the flip side of value

How can you hedge against inflation?

What to do if you’re worried about inflation

Hedge funds: the end of an era?

Clarity in investing is not the same as certainty

Ten excuses for not investing

The biggest crash in world history