25 years ago, there were approximately $300 billion of assets invested in hedge funds. Today, that figure has increased to more than $5 trillion. Given the amount of assets under management, an important question for investors is: Have hedge funds justified the increased investment? The evidence demonstrates that the answer is no. And sadly for investors, this isn’t new information.

We’ll begin our review of the evidence with William Bernstein, author of the mini book Skating Where the Puck Was, who examined the returns of hedge funds, applying a three-factor analysis to the Hedge Fund Research global returns series, for the period 1998-2012. Bernstein found that while hedge funds did produce large alphas in the first third of the period, as investor assets chased those returns, alphas shrank and then turned negative. From 1998 through 2002, the hedge funds produced an incredible alpha of 9.0 percent. That performance fuelled the growth of the hedge fund industry. However, from 2003 through 2007, their alphas disappeared, falling to -0.7 percent. And from 2008 through 2012, the alpha became -4.5 percent. Bernstein’s findings demonstrate the wisdom of the investment adage that you don’t want to be a member of a crowd.

We now turn to reviewing the evidence from Rodney Sullivan’s paper, Hedge Fund Alpha: Cycle or Sunset?, published in the Winter 2021 issue of The Journal of Alternative Investments, which provided further support for the thesis that alpha is becoming increasingly harder to generate. Sullivan examined the performance of hedge funds over the much longer period 1994-2019. He created a hedge fund composite using the monthly after-fee returns of the overall Credit Suisse Hedge Fund Index and the HFRI Fund Weighted Composite Index (weighted 50/50). He began by noting that it’s a mistake to compare the performance of hedge funds to an all-equity benchmark because many hedge funds use alternative strategies. To address this issue, he used regression analysis and found that on average hedge funds had exposure to market beta (S&P 500 Index) of 0.37 and exposure to bond market beta (Bloomberg Barclays U.S. Aggregate Bond Index) of 0.14. Following is a summary of his findings. All results are net of fees:

The impact on investors was much worse than it appears because while hedge funds generated alpha of 1.7 percent a year over the full period, the strong results occurred while assets under management were relatively small. Those strong results led to a dramatic increase in cash flows, as investors wanted “in on the game.” Sullivan asset-weighted the returns and found that due to the increase over the full period, hedge funds had destroyed almost $46 billion on a risk-adjusted basis. And alpha has been persistently negative since 2008. Just think about how much has been lost in the quest for alpha.

Sullivan next analyzed the performance of the hedge funds taking into account their exposures to the leading common factors identified in the literature: size, value, cross-sectional momentum, quality, time-series momentum (trend following) and equity volatility (selling both a put and a call with the same strike price). He noted that each of the factors had low correlations to stocks and negative correlations to each other (they are unlikely to be redundant). Scaling each of the factors to a volatility of 10 percent, he found:

We now turn to reviewing the latest research from Nicolas Bollen, Juha Joenväärä and Mikko Kauppila, author of the study Hedge Fund Performance: End of an Era?, published in the Financial Analysts Journal, Issue 3 (2021).

Bollen, Joenväärä and Kauppila examined hedge fund performance using the union of six commercial databases of returns over two sub-periods demarcated by the December 2007/January 2008 breakpoint. Their data sample covered the period 1994-2016 and more than 12,000 hedge funds (of which 4,431, about 36 percent, were still reporting at the end of the period). They found that an equally weighted hedge fund index provided a cumulative return of 225 percent from 1997 through 2007, far outpacing an equally weighted stock and bond portfolio, which generated a cumulative return of 125 percent. Those returns led to the dramatic increase in cash flows, as investors wanted a “piece of the pie.” However, from 2008 through 2016, the hedge fund portfolio earned just 25 percent compared to the 70 percent return of the stock and bond portfolio—the underperformance occurred when the industry had much greater assets under management.

They also found that the cross-sectional distribution of individual hedge funds indicated a marked decline in performance over time—the percentage of funds with positive and significant Fung and Hsieh alpha, for example, fell from about 20 percent to 10 percent over the sample, while the percentage with significantly negative alpha increased from 5 percent to about 20 percent at times. Importantly, they also noted the wide dispersion in hedge fund performance: Sharpe ratios were 0.22 and 1.17 at the 25th and 75th percentiles. This highlights the risk of hedge funds and the importance of diversifying that risk. Their findings led Bollen, Joenväärä and Kauppila to conclude: “In sum, we confirm reports that hedge fund performance has weakened considerably over the past decade.”

Bollen, Joenväärä and Kauppila also examined whether investors can use any of a set of predictor variables, developed in prior work, to select subsets of hedge funds that perform satisfactorily out-of-sample despite the general decline over time. Their tests of performance predictability measured the realisable benefit of investing in hedge funds, taking into account real-world constraints and well-known database biases. Most importantly, based on survey data from institutional investors, they simulated a random selection of 15 funds (to address the dispersion of returns problem) from the top quintile as ranked by the predictor variables and repeated the process 1,000 times. They found that while the process improved the Sharpe ratio in the first subsample, in the post-2007 period the improvement was “gone with the wind,” as the lower volatility it produced was offset by lower returns. They concluded: “This result indicates that an overall deterioration in hedge fund performance cannot be overcome by using the predictors.”

Why has performance deteriorated?

We have one more data sample to review, which is the performance of hedge funds over the most recent 10 calendar years. As you can see in the table below, over the 10-year period ending December 2020, the HFRX Global Hedge Fund Index underperformed every single major equity asset class by wide margins. It also outperformed virtually riskless one-year Treasuries by just 0.4 percentage point, and underperformed intermediate and long-term Treasuries. 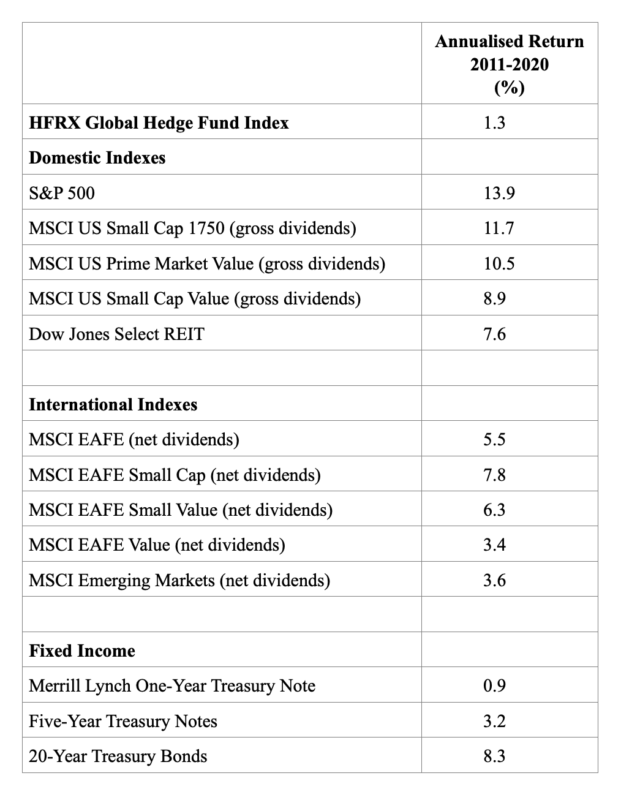 The evidence demonstrates that the market has been persistently teaching investors that on average the only objective hedge funds have achieved is transferring assets from investors to the fund sponsors.

In 1998 Charles Ellis wrote Winning the Loser’s Game in which he presented evidence that while it’s possible to generate alpha (risk-adjusted outperformance) and win the game of active management (individual security selection and/or market timing), the odds of doing so are so poor it’s not prudent to try. The surest way to win a loser’s game — like craps and roulette — is to choose not to play. In investing, that means using passively managed funds (funds that don’t engage in individual security selection and/or market timing, and use systematic approaches to implementation) such as index funds.

The Incredible Shrinking Alpha presented the evidence and the explanations demonstrating that since Ellis published his book, winning the loser’s game has persistently become more difficult. The research findings create a puzzle: Why have hedge fund assets continued to grow? Why have investors ignored the evidence? One possible explanation is that the growth in hedge fund assets can be explained by the triumph of marketing hype, and hope over wisdom and experience. Another explanation is perhaps the need to feel part of “the club” that has access to these funds. Those investors would have been better served to follow Groucho Marx’s advice: “I wouldn’t want to belong to a club that would have me as a member.” A third explanation is that they were not aware of the evidence. You no longer have that excuse!

The information presented herein is for educational purposes only and should not be construed as specific investment, accounting, legal or tax advice.  Certain information may be based on third party data which may become outdated or otherwise superseded without notice.  Third party information is deemed to be reliable, but its accuracy and completeness cannot be guaranteed. Indices are not available for direct investment. Their performance does not reflect the expenses associated with the management of an actual portfolio nor do indices represent results of actual trading.  Performance is historical and does not guarantee future results. By clicking on any of the links above, you acknowledge that they are solely for your convenience, and do not necessarily imply any affiliations, sponsorships, endorsements or representations whatsoever by us regarding third-party Web sites. We are not responsible for the content, availability or privacy policies of these sites, and shall not be responsible or liable for any information, opinions, advice, products or services available on or through them. The opinions expressed by featured authors are their own and may not accurately reflect those of the Buckingham Strategic Wealth® or Buckingham Strategic Partners® (collectively Buckingham Wealth Partners). LSR-21-134