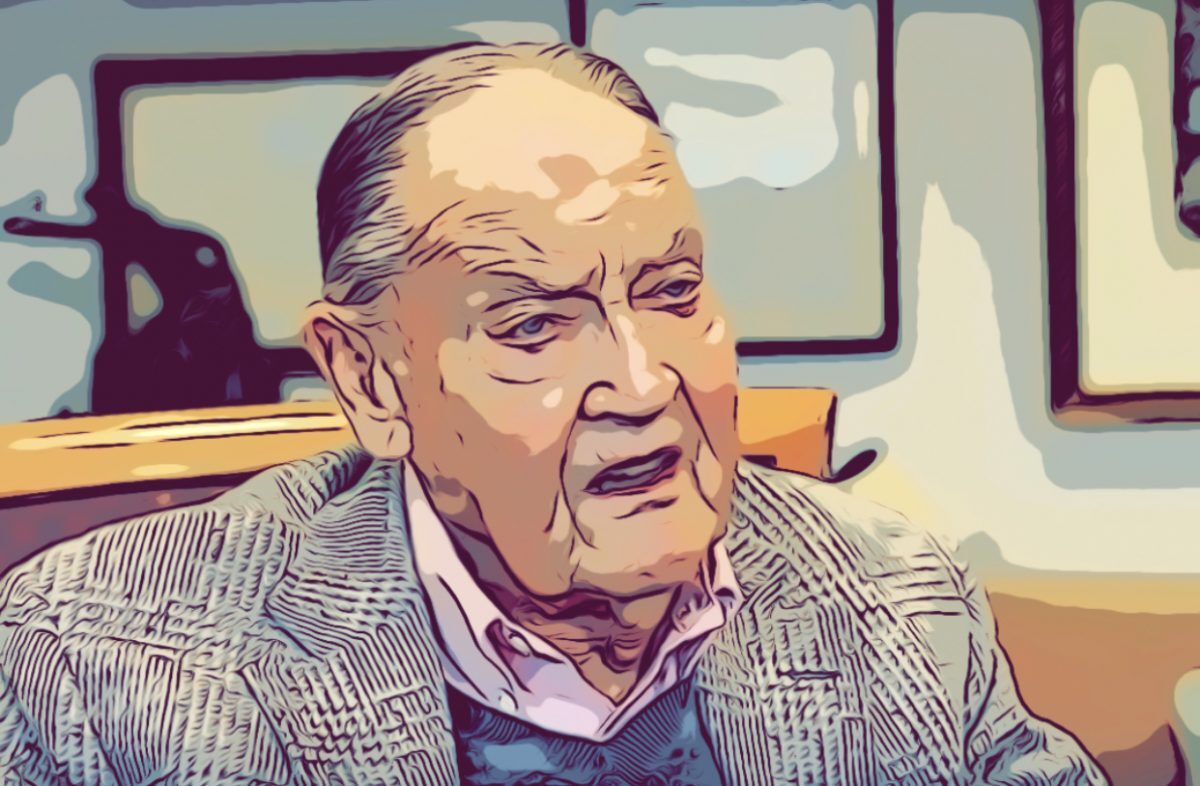 Last week marked the third anniversary of the passing of Jack Bogle, the ultimate investor’s champion. For those of us who were lucky enough to know him, he will never be forgotten. Indeed it was largely Bogle who inspired me to launch The Evidence-Based Investor, and we like to think that the work we do at TEBI is, in some small way, helping to keep his memory alive.

We’ve decided to pay tribute to the great man here with an extract from Trillions — the excellent new book by the FT’s global finance correspondent ROBIN WIGGLESWORTH on the rise of index investing. In it, Robin tells the moving story of Bogle’s first and only visit, five years ago, to the annual Berkshire Hathaway shareholders’ meeting. The event has become known as Warren Buffett’s Woodstock of Capitalism. Of course, it’s Buffett himself who usually takes top billing. But, in 2017, it was his good friend Bogle who received the warmest ovation.

Enjoy the story, and thank you to Robin for allowing us to republish it.

In December 2016, John Clifton Bogle received an enigmatic note from an old friend, a former Morgan Stanley strategist named Steven Galbraith, asking him to block off the first weekend of next May, when Bogle would be turning 88. Galbraith wanted to do something special to celebrate his friend, but refused to tell Bogle what he had cooked up.

After an inauspicious start in 1974, Vanguard had, thanks to the messianism of its headstrong founder, become one of the world’s biggest money managers, with an array of dirt-cheap funds that do nothing but attempt to mimic markets rather than beat them.

As his 88th birthday approached, Bogle had lost his earlier imposing physical presence. His angular features had softened, the severe crew cut he sported for most of his life had become thin and sparse, and his posture had been eroded by scoliosis, age, and other afflictions. Bogle suffered his first of many heart attacks at 31, at age 38 he was diagnosed with a rare heart disease, and at 67 he finally had a heart transplant. But his voice still bloomed like a foghorn, his mind was as sharp as ever and he had lost none of his appreciation for adventure. So he gamely agreed to whatever mysterious plan Galbraith had hatched.

On the morning of May 5, 2017, Bogle and his family drove from their house in Bryn Mawr to Atlantic Aviation, Philadelphia’s private plane airport. There, a Citation jet with Galbraith picked them up and flew straight to Omaha, for Bogle to attend his first-ever Berkshire Hathaway annual shareholder meeting.

The event is often called the Woodstock of capitalism, a forum for anyone who owns a share in Berkshire Hathaway to ask Buffett and his partner Charlie Munger about everything from business to geopolitics and personal values. The duo revel in the attention, Buffett responding with his well-honed folksy wit and Munger with terse acidity.

Checking in at the Omaha Hilton, Bogle received his first awkward but pleasant surprise: a horde of guests armed with iPhones gave Vanguard’s founder the full paparazzi experience, snapping photos of the latest financial celebrity to make a trek to Nebraska’s carnival of capitalism. “It felt like escorting Bono around,” Galbraith recalls. Bogle’s wife, Eve, was a little concerned about the frenzy, given his frailty, but Bogle lapped it up. The shower of photography continued through the day, including over dinner at the hotel later that evening. “I quickly learned that saying ‘yes’ was infinitely more efficient than saying ‘no’ and then arguing about it,” Bogle later wrote.

It was when he woke up on Saturday morning and looked out the hotel room window that Bogle realised just how big a deal the Berkshire meeting is. A line four people wide snaked from the conference center to as far as the eye could see, thousands of people braving the chilly Nebraska morning for the chance to sit closer to Buffett and Munger. That year, 40,000 people attended, with over half forced to watch a video link from a nearby overflow site. Bogle, his family, and the Galbraiths were, however, given prime seating near the front of the cavernous arena, right behind Berkshire’s longest-standing shareholders and next to its directors.

As usual, the duo opened with a limp joke. “You can tell us apart because he can hear and I can see. That’s why we work so well together,” Buffett wisecracked. He went on with the usual discussion of Berkshire’s last annual results, and as interesting as it was, after a while Bogle began wondering why Galbraith had brought him all the way to Omaha at his advanced age and poor health. But then Buffett made a sudden detour, and all became clear.

“Jack, could you stand up?”

“There’s one more person that I would like to introduce to you today and I’m quite sure he’s here. I haven’t seen him, but I understood he was coming,” Buffett said, scanning the audience. “I believe that he made it today and that is Jack Bogle… Jack Bogle has probably done more for the American investor than any man in the country. Jack, could you stand up? There he is.” To thunderous applause, the gaunt but beaming Bogle, dressed in a dark suit and checkered open-neck shirt, stood up, waved to the crowd, and took a small bow toward Buffett and Munger’s podium.

To attendees who might not know who the old man might be, Buffett explained how index funds like those pioneered by Vanguard had taken on and upended the money management industry. “I estimate that Jack, at a minimum, has saved and left… tens and tens and tens of billions into their pockets, and those numbers are going to be hundreds and hundreds of billions over time,” Buffett said. “So, it’s Jack’s 88th birthday on Monday, so I just [want to] say, ‘Happy birthday, Jack.’ And thank you on behalf of American investors.” Another round of hearty applause broke out in the arena.

For Bogle, being lauded by Buffett himself in front of thousands of people was an immensely emotional experience. “I don’t get verklempt about a lot of stuff, but this was really really awesome,” Galbraith said. “It meant a lot to him.” The number of people who wanted a photo with him reached the point where Vanguard’s founder had to start leaving sessions early to give enough time to get out. Bogle later wrote that he “began to understand why rock stars among our entertainers are so eager to avoid the paparazzi”. Nonetheless, for someone who was near the end of a long and eventful life that had left him wealthy but hardly rich, the sense of an astonishing legacy being recognised and burnished was unmistakable.

“I confess that, on this one grand occasion, I found huge satisfaction in being recognised for my contribution to the world of investing, and to the wealth of the human beings who have entrusted their assets to Vanguard’s index funds,” Bogle later said. “I’m only human!” But Buffett is also only human, and Bogle’s visit was akin to a victory lap for the Oracle of Omaha as well.

Trillions by Robin Wigglesworth is published by Penguin.

If you enjoyed this article, we think you’ll like these too:

Investment lessons the markets taught in 2021

The chart that shows traditional active management is dead

High-quality content such as this would not be possible without the support of our strategic partners, to whom we are very grateful.