There are basically two types of company assets — physical assets such as land,  vehicles, equipment and unsold stock, and non-physical assets, usually referred to as intangibles. These include, for example, goodwill, brand recognition and intellectual property. Some, but by no means all, intangible are included on a company’s balance sheet.

Most investment analysts tend to consider intangible assets when assessing whether a particular stock is either under- or over-priced. But what, if anything, do intangible assets tell us about future performance? And what type of intangible assets offer the most clues? A new paper by Savina Rizova and Namiko Saito from DIMENSIONAL FUND ADVISORS provides some answers.

Many companies use intangible assets such as patents, licenses, computer software, branding, and reputation to earn revenues. These intangible assets have always been part of the economic landscape. In our paper, we study the impact of intangibles on our ability to identify differences in expected stock returns and find no tangible performance benefit from adjusting for intangibles.

It is important to begin by distinguishing between two types of intangible assets. Under US generally accepted accounting principles (GAAP), externally acquired intangibles are reported on the balance sheet. They currently represent about a quarter of the reported value of assets for the average US company. These assets are accounted for when computing book equity.

Some argue that to more effectively infer differences in expected returns across firms sourcing most of their intangibles externally and firms sourcing them mostly internally, we should capitalise internally developed intangibles. Several academic studies do that by accumulating the historical spending on research and development (to capture the development of “knowledge capital”) and selling, general, and administrative (SG&A) expenses (to capture the development of “organisational capital”).

In the present study, we follow the approach suggested by Peters and Taylor (2017)2 and find that while intangible assets comprise more of companies’ assets over time, this stems mainly from growth in externally acquired intangibles. Estimated internally developed intangibles have not meaningfully increased as a proportion of total assets (see Exhibit 1). 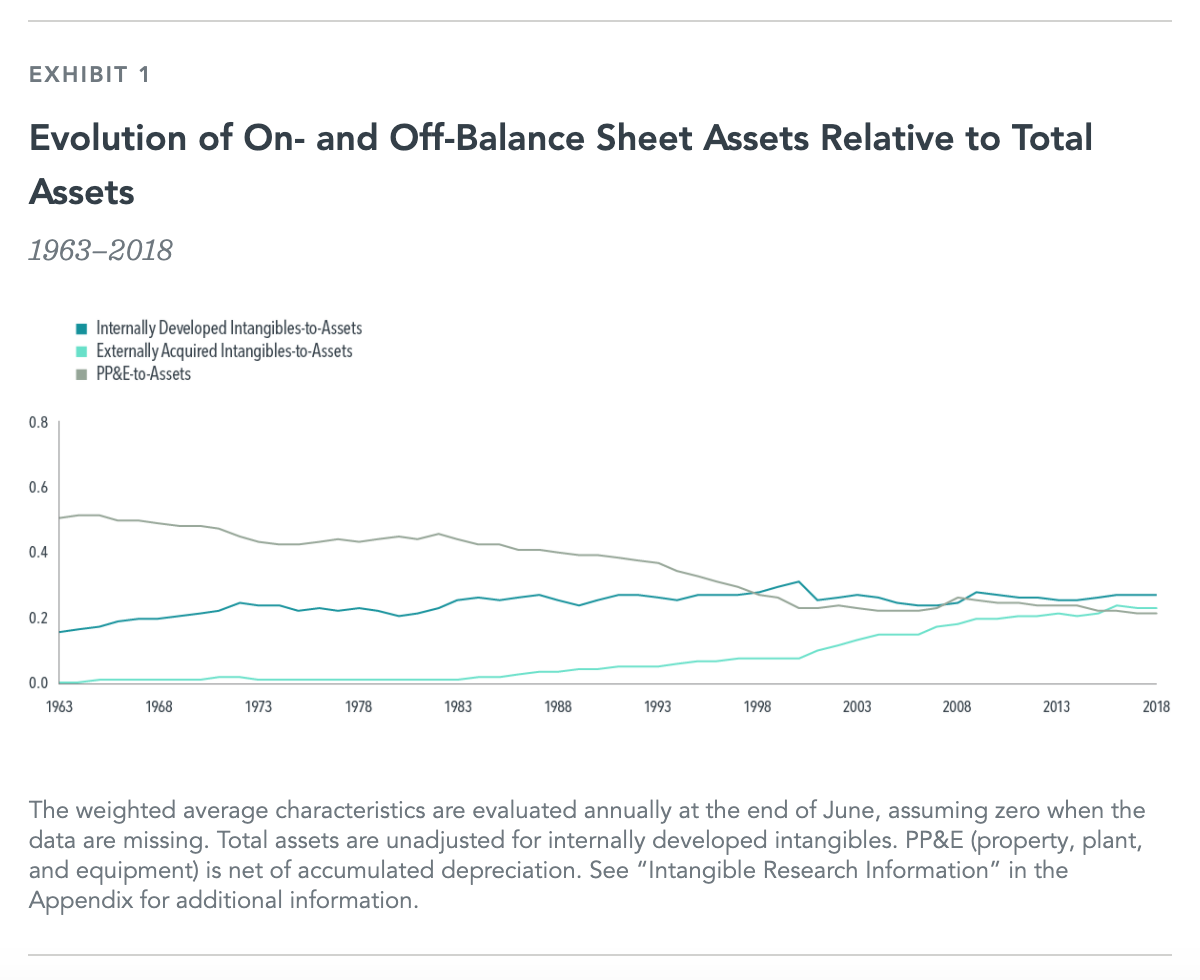 Moreover, the estimation approach for internally developed intangibles has several important caveats in addition to the lack of market valuations.

First, the estimation of internally developed intangibles assumes that the development of intangible capital can be captured fully through spending reported on the income statement. Second, the approach is critically dependent upon the availability of reliable and comprehensive R&D and SG&A data.

However, we observe R&D data for about half of the US market even today. As a result, the estimated knowledge capital is zero for about half of the US market. Thus, we would adjust the value and profitability metrics of half of the market for knowledge capital and leave the rest unadjusted, potentially making firms in the adjusted and unadjusted groups less comparable, not more, after the adjustments. Further, while SG&A data are available for most US companies since the 1960s, the breakdown of operating expenses into cost of goods sold and SG&A varies often across companies and data sources, which might add noise to the estimation of organisational capital. The estimation approach can also produce noisy results because it applies constant amortisation rates through time and does not allow for impairments. As a result, a company can be approaching bankruptcy and still appear to have billions of dollars’ worth of internally developed intangibles.

Therefore, we believe investors are better off continuing to incorporate externally acquired intangibles reported on the balance sheet and not adding noisy estimates of internally developed intangibles to value and profitability metrics.

You can read the full paper here:

This article first appeared on the Dimensional Fund Advisors website.

Interested in more insights from Dimensional? Here are some other recent articles from this series:

Should a top-heavy stock market worry us?