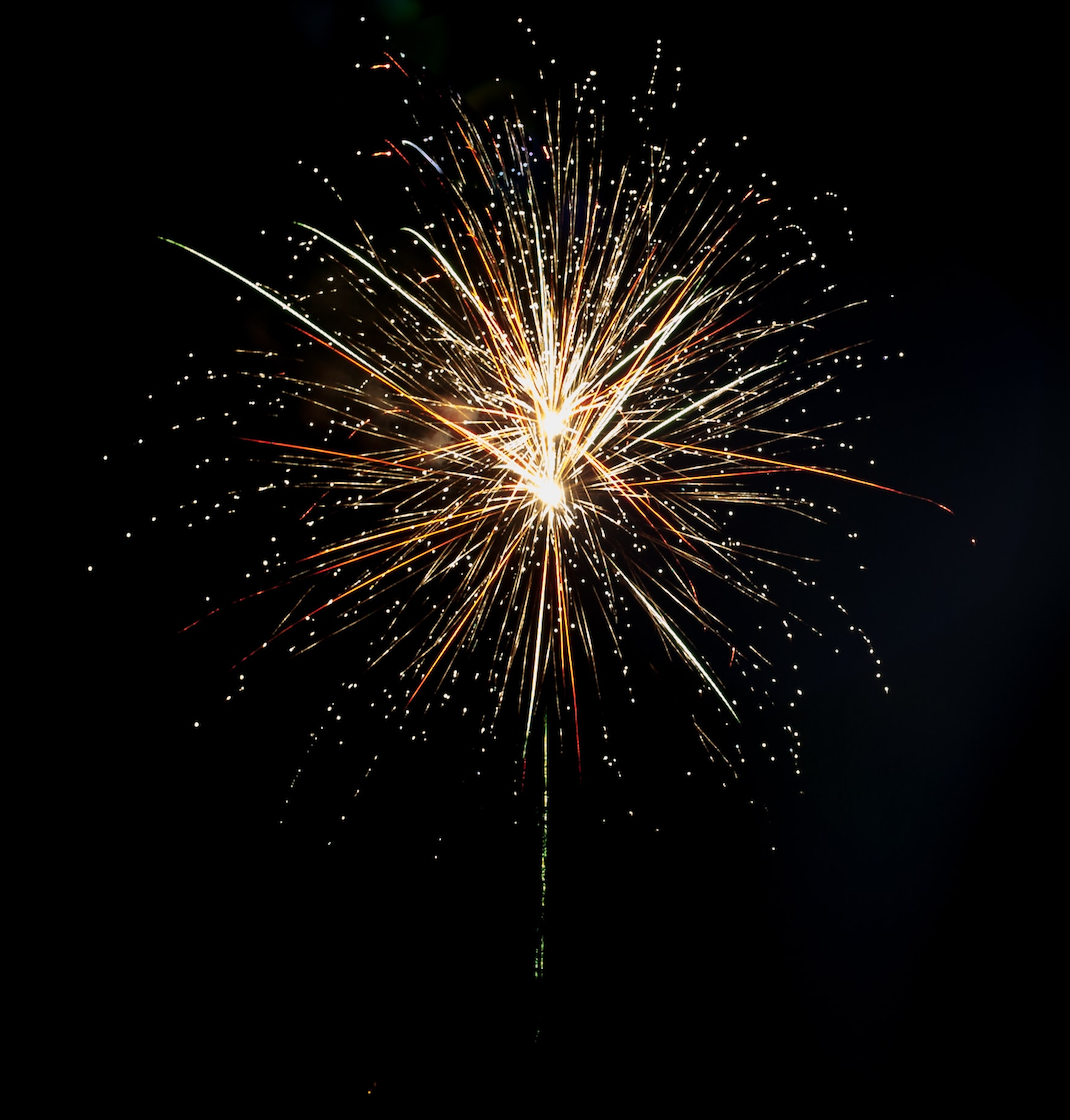 Investors and the media tend to pay close attention to a fund’s recent performance. When a fund’s short-term record is especially good, it almost invariably attracts greater attention and significant inflows.

As Craig Lazzara explained last month, there was an even smaller proportion of outperfoming funds than normal in 2020. But, as is usual in years when the dispersion of returns is higher, many of the winners outperformed by large margins.

But what actually happens, in general, after a fund manager shoots the lights out? Morningstar’s JEFFREY PTAK has just conducted a study into equity funds that gained more than 100% in a calendar year and how they fared afterwards. The vast majority lost money over the next three years. Jeff urges investors to avoid investing in such funds on impulse.

— These 18 funds tend to invest in stocks that are very expensive — they were recently trading at around three times the valuation of the NASDAQ 100 Index, on average.

In 2020, 15 stock mutual funds and three exchange-traded funds posted gains of 100% or more. That was the most since 2009, when 29 funds achieved the same feat. Investors have taken notice, with those 18 funds and ETFs gathering nearly $19 billion in inflows last year in total.

But what tends to happen to stock funds after they post a gain of 100% or more in a year? To answer that question, we scoured return data from the past three decades, finding:

— Funds have gained 100% or more in a calendar year 141 times since 1990. This amounts to 0.18% of all calendar-year returns reported over that span, making it a very rare occurrence. 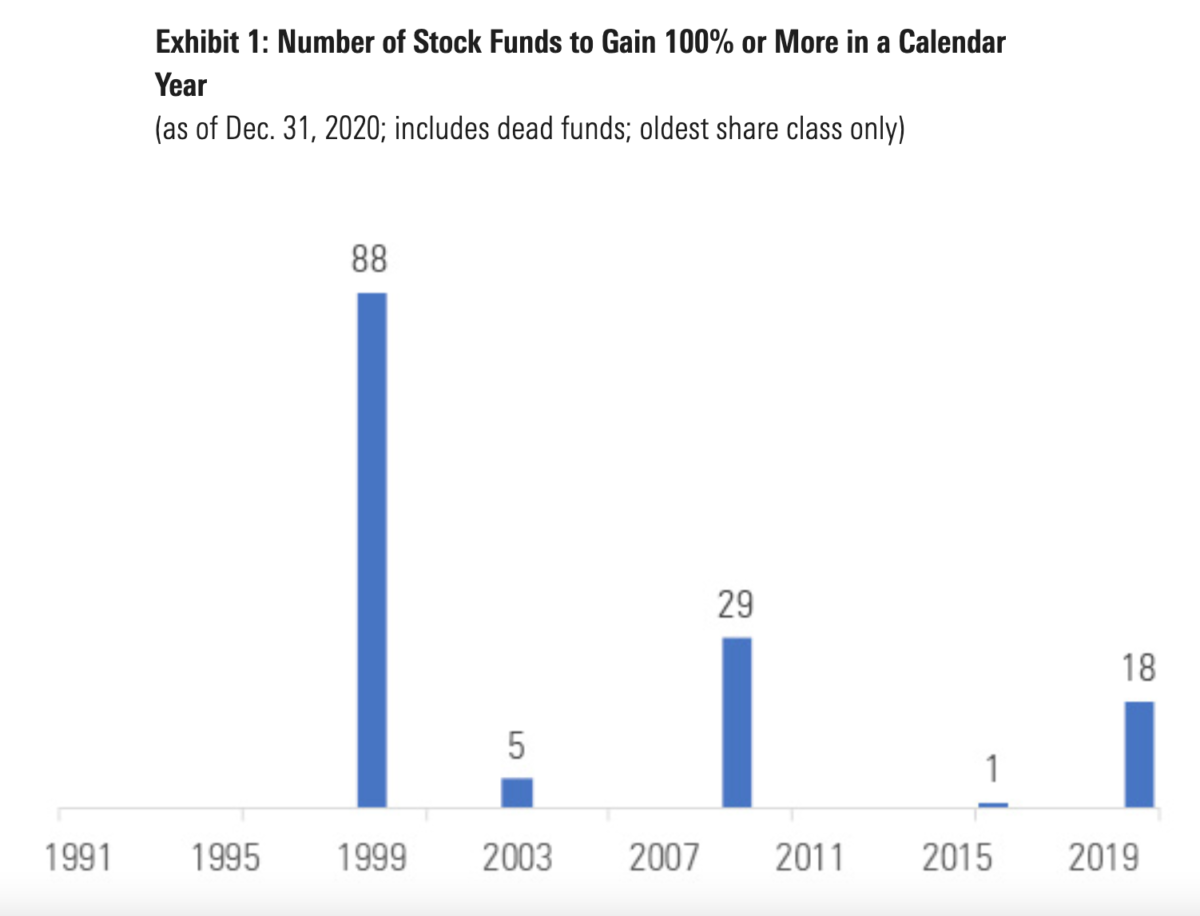 — The ensuing years tended to be unkind to these funds: The average fund tumbled to a 9.9% loss in the year following its big gain, a 17.5% annual loss in the two subsequent years, and a 16.6% per year loss in the three years that followed. 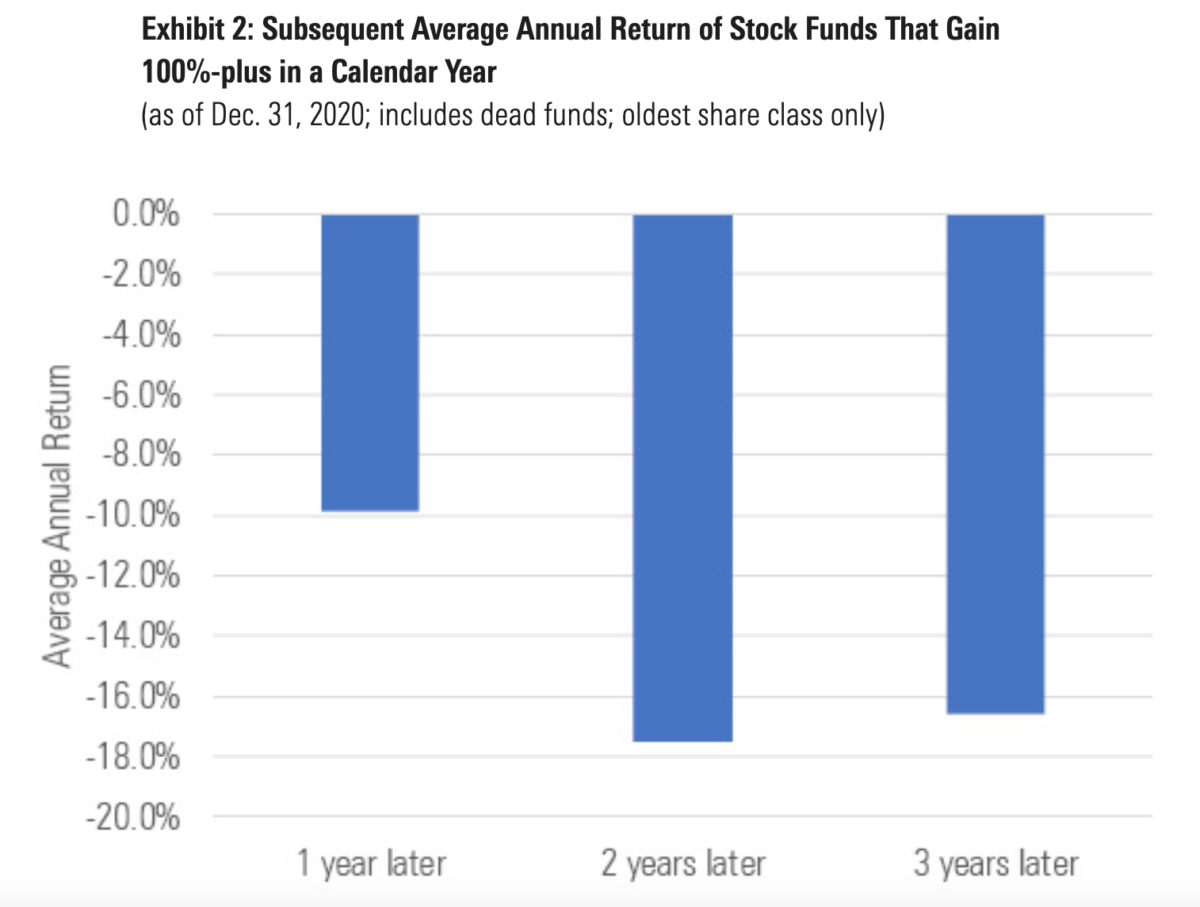 — Subsequent losses were widespread among these funds. Of the 123 funds to have gained 100% or more in a calendar year since 1990, only 24 earned a positive return in the three years that followed. In other words, 80% of these funds went on to lose money. 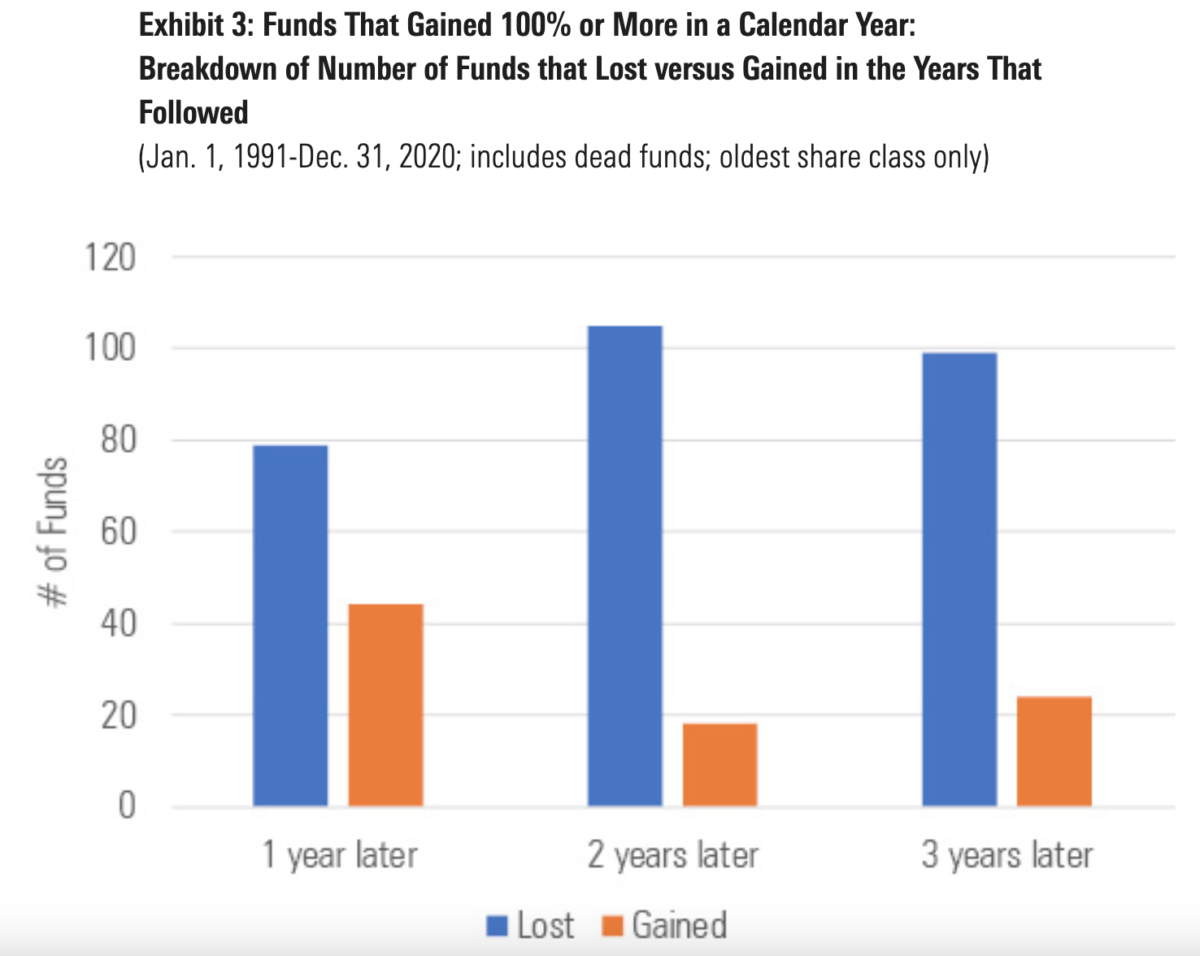 By contrast, the 18 funds that scored big gains in 2020 are better diversified and tend to own higher-quality names, the bulk being stocks our equity analysts have assigned a narrow (22% of holdings) or wide (38%) economic moat rating, indicating they possess a competitive advantage. (The analysts assign Tesla (TSLA), which is the largest holding of these 18 funds at more than 8%, a narrow moat rating.) 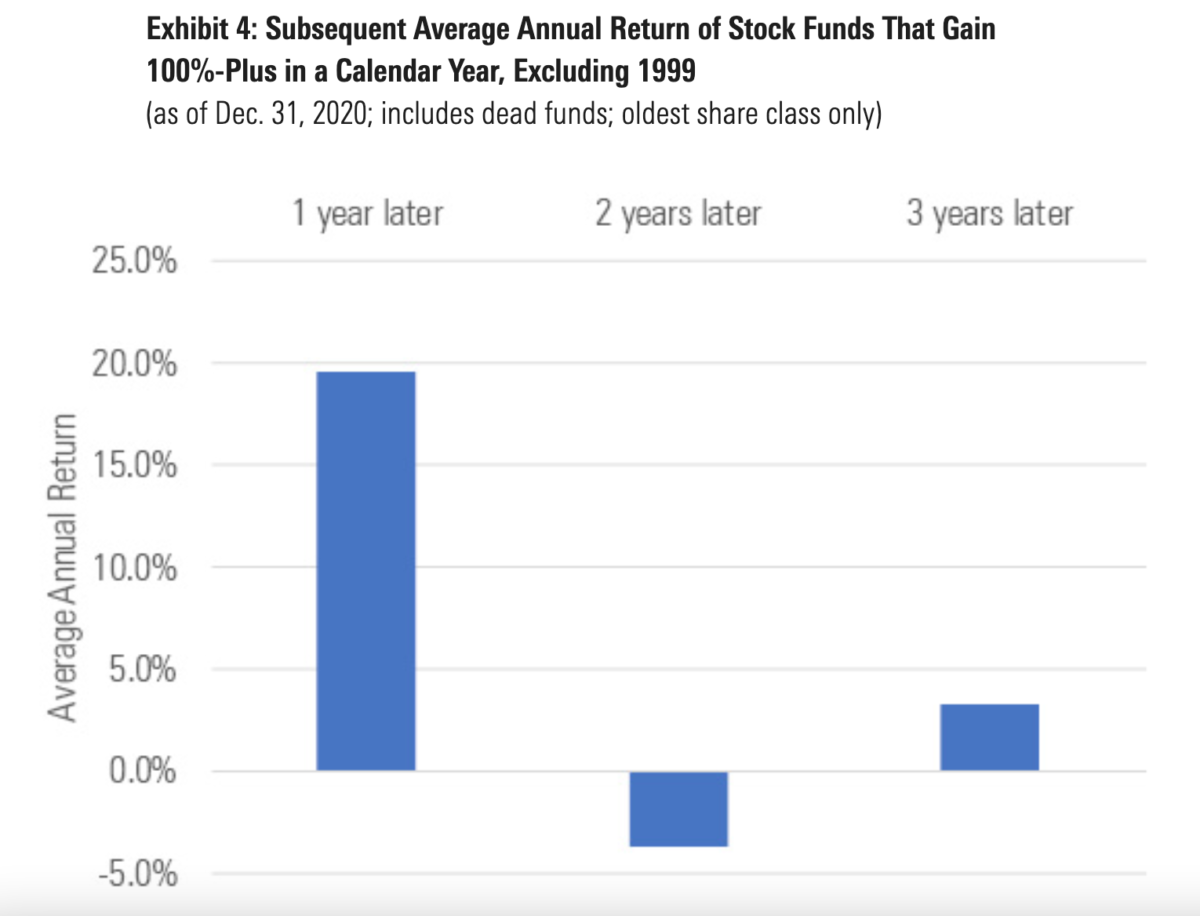 A strong predictor of how these funds fared in the years after their big gain was how they performed before that gain. When we plot the cumulative returns of these funds’ returns immediately before and after the calendar year in which they posted a 100%-plus gain, we find 17 funds that earned a positive return in the three years following their big gain (the encircled portion of Exhibit 5). What did they share in common? All but two had lost money in the years leading up to their big gain. 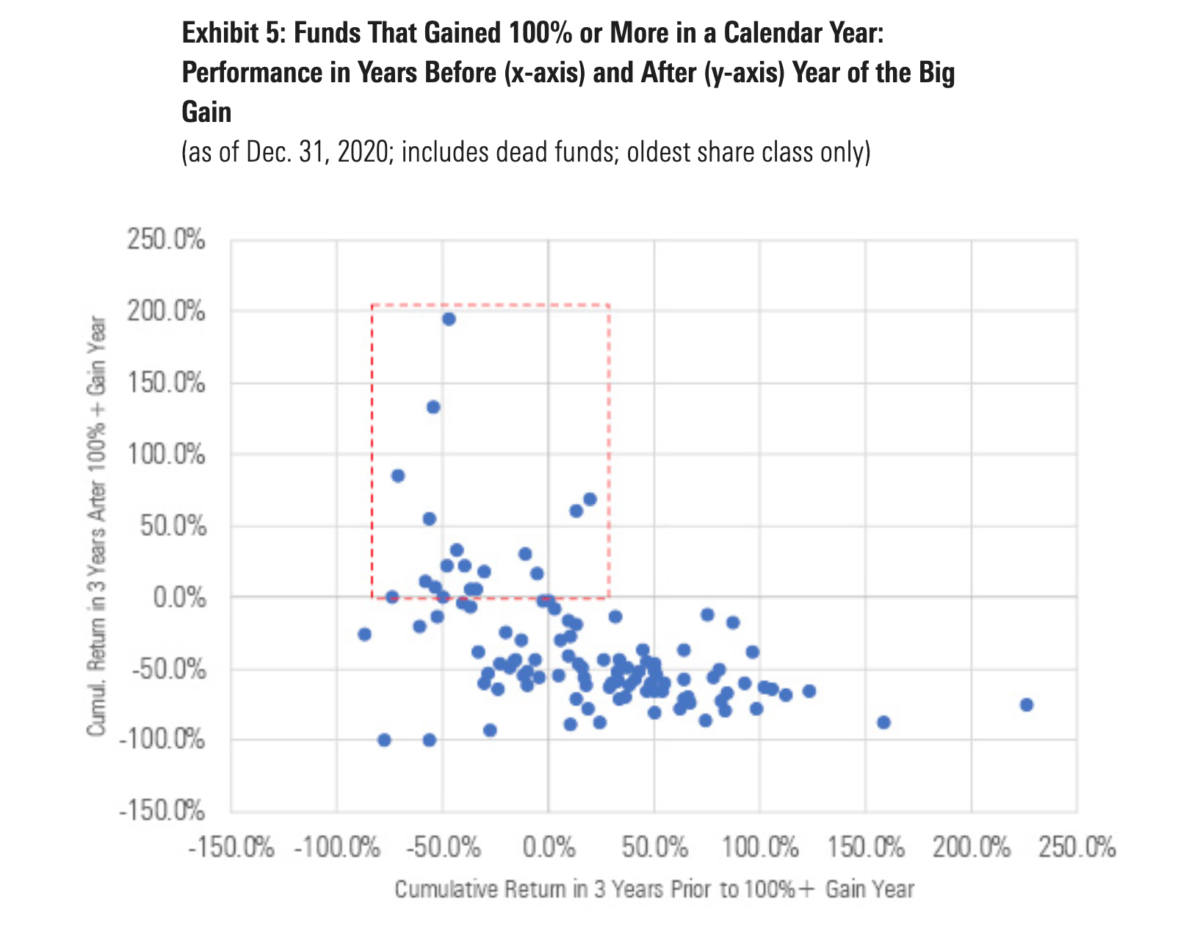 (There were five funds that gained 100% in a calendar year, and earned positive returns in the three ensuing years, but which did not have at least a 12-month prior track record entering the calendar year in which they posted the 100% gain. These funds are excluded from the chart above.)

Funds that lost money before their big year saw a 11% cumulative loss in the years that followed the big gain, on average. By contrast, funds that made money before their big year lost 52% of their value in the ensuing three years. Thus, prior-year losses didn’t eliminate the possibility a fund would lose in the years after its big gain, but it made it less likely and the subsequent losses tended to be shallower.

This is a concern when we consider that 17 of the 18 funds that gained 100% or more in 2020 had produced positive returns in the three prior years. What’s more, the average fund had gained more than 23% per year over the 2017-19 period, a very strong showing. 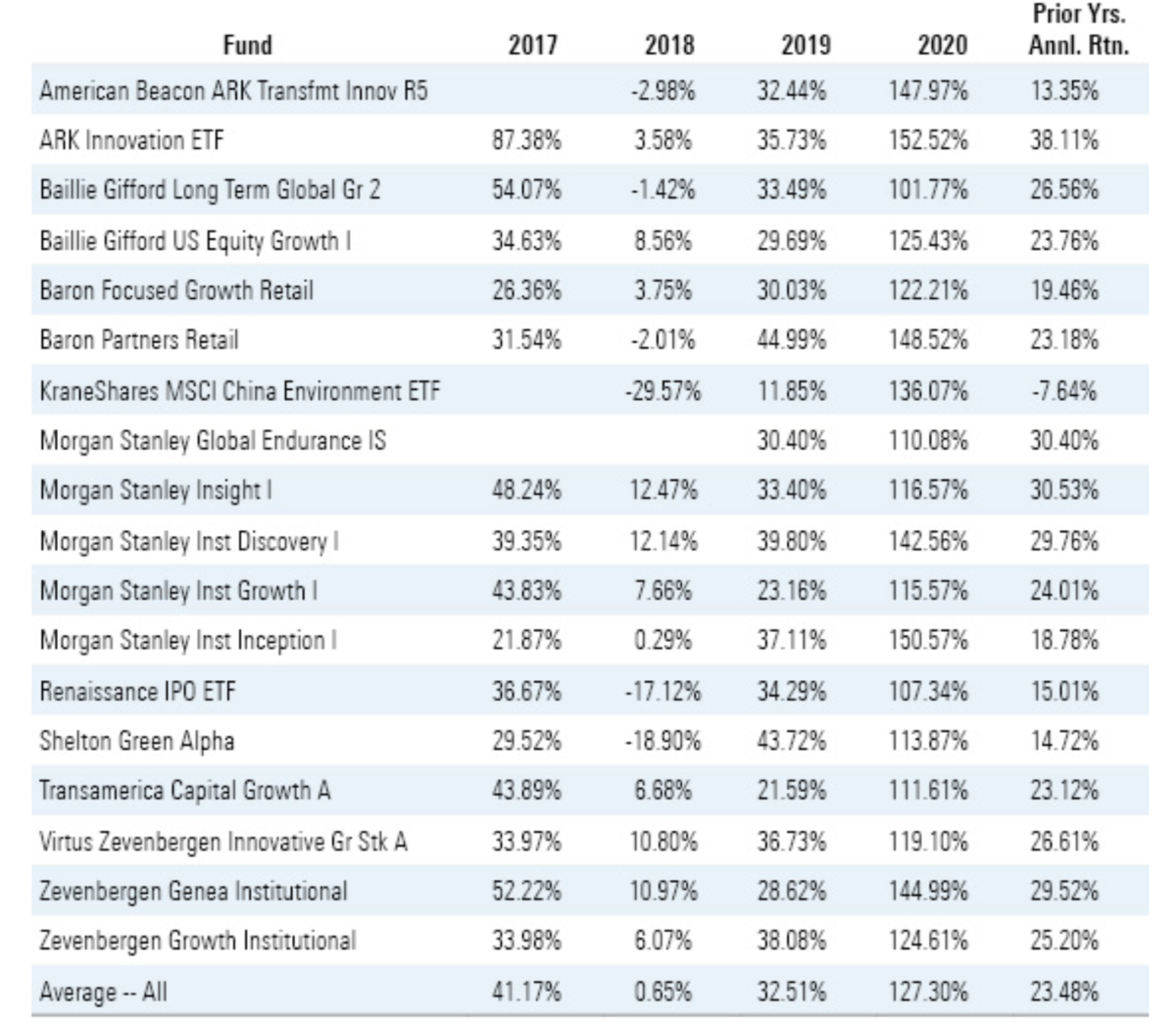 To be sure, this doesn’t indict these funds, several of which boast strong long-term investment merits. (Morningstar analysts have assigned an Analyst Rating of Bronze to Baron Partners Retail Fund and Silver to both Morgan Stanley Institutional Discovery Fund and Morgan Stanley Institutional Growth Fund.) But given their remarkably strong recent returns it behooves investors to ask themselves questions about how sustainable that performance is, especially if they have a shorter time horizon.

If you’re considering one of 2020’s high-fliers, here’s what you ought to consider asking yourself:

— What is my reason for investing in this fund besides its sparkling recent performance?

— Are those reasons fundamental (that is, the talent of the team running the strategy or the process) or emotional (that is, a friend owns it, so I thought I’d give it a whirl)?

— Why did the fund soar last year?

These questions are important because typically in situations like these a fund’s holdings appreciate not solely because their investments saw massive fundamental improvements, but rather because other investors were willing to pay more to own those securities.

That’s apparent when we look closely at the 18 funds that gained 100% or more last year. To state the obvious, when investors hold an equity fund, they’re investing in that basket of stocks and thus entitled to a share of their earnings. That makes it worth examining what investors in these funds were paying for a dollar of the underlying stocks’ projected earnings per share as 2020 rolled on, shown below. 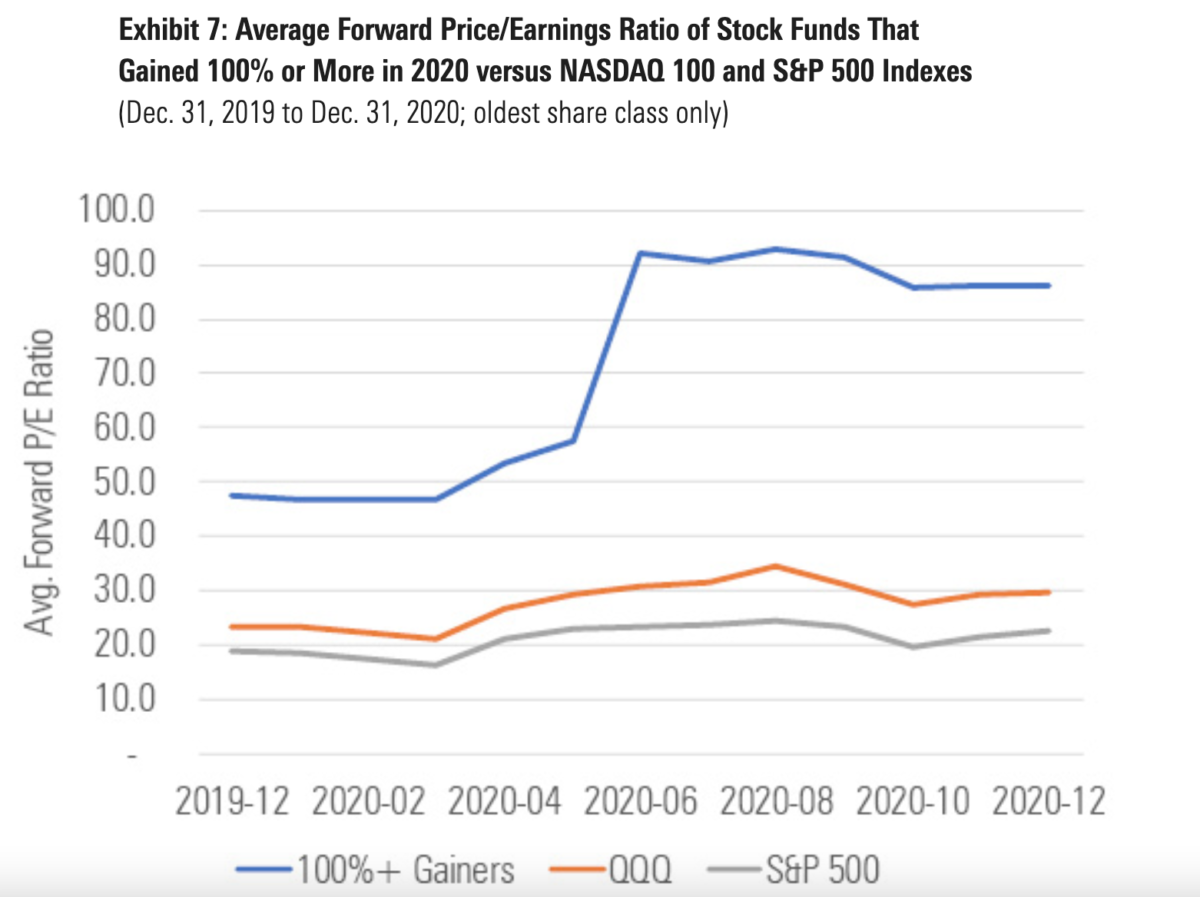 To summarise, the average price investors in these funds paid exploded higher over the course of 2020. This means that even for all the strides these funds’ investments might have made–and indeed a number of these firms grew sales and profits sharply last year–the share prices rose even faster, explaining why the forward price/earnings ratio spiked.

It’s true that these funds entered 2020 owning a basket of pricey stocks and despite that went on to bag big gains. And it’s also true that these managers could rotate away from these expensive stocks, opting for those that don’t cost as much to own. But if history has shown anything, it’s that it’s tough to thread that needle. And with these portfolios valued as dearly as they are — roughly three and four times that of the NASDAQ 100 and S&P 500 indexes, respectively–the margin for error is minuscule.

The managers of the 18 stock funds that more than doubled last year deserve credit. They made their investors a lot of money over a very short timeframe, a rare and impressive achievement.

That said, when we examine the track records of funds like these going back three decades, we find that many tumbled to hefty losses in the years that followed their big gain. It’s not a forgone conclusion that last year’s crop of winners will meet a similar fate. But they are coming off a string of very strong performances and, as a result, hold securities that look overvalued by a variety of metrics, which raises questions about their prospects for the next few years.

If you have a long time horizon and have worked through fundamental questions like “How prudent is this investment process?” or “How talented, deep, and committed is the management team?” (like our analysts do in assessing funds, including several of the offerings that notched triple-digit returns in 2020), then it should mitigate the risk of buying one of these funds for the wrong reasons, on impulse.

JEFFREY PTAK is Chief Ratings Officer at Morningstar. This article was first published on the Morningstar blog.

The most over- and under-hyped benefits of ETFs

The biggest investment lesson from 2020

If you’re a financial adviser or planner and you enjoy reading TEBI, why not try our sister blogs, Adviser 2.0 and Evidence-Based Advisers?