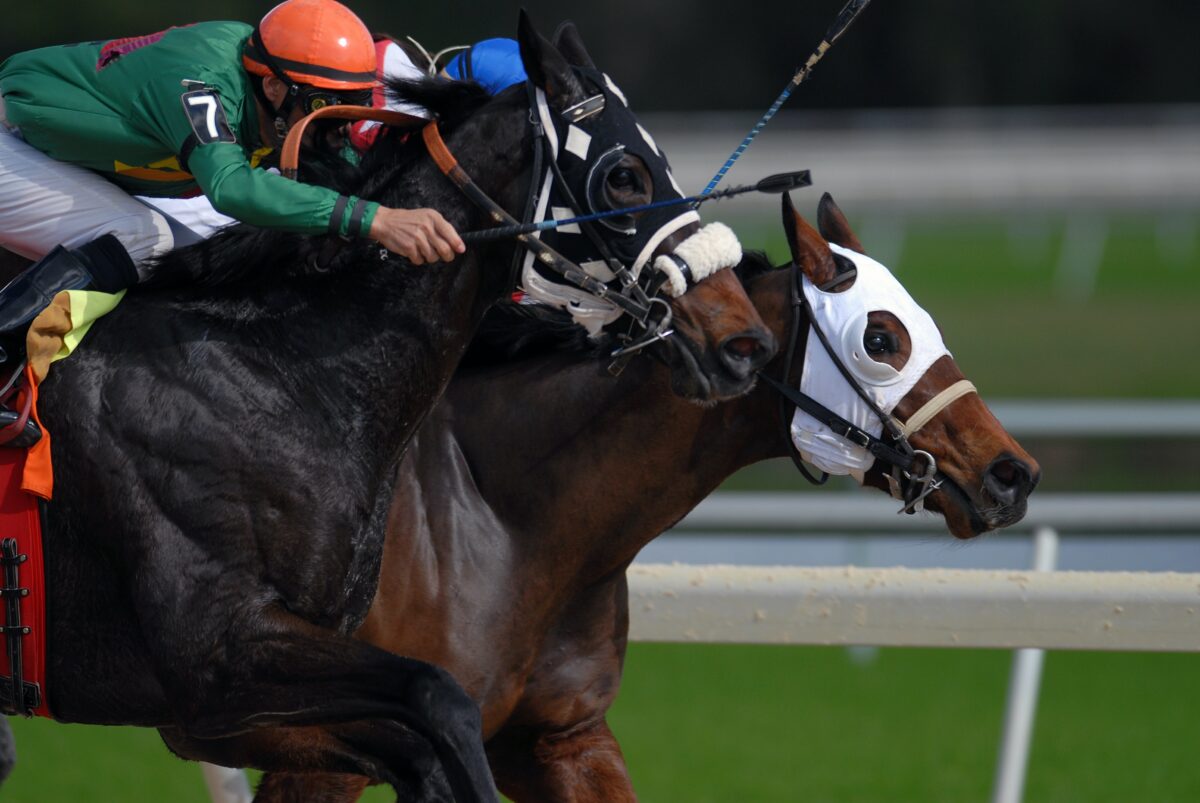 It’s 28 years since the first exchange-traded fund was launched, and they’ve grown from strength to strength. It’s a trend that shows no sign of abating. Assets managed by ETFs jumped by more than a third during 2020, with record net investor inflows pushing global ETF assets to an all-time high of $8 trillion. So will ETFs eventually become the industry standard. For Morningstar’s JOHN REKENTHALER, it’s virtually inevitable.

Some 20 years after their 1993 debut, exchange-traded funds had become commonplace. However, several obstacles prevented them from supplanting mutual funds as the Main Street investment. ETFs lacked sales commissions, which limited their appeal to financial advisors. They were almost always passively managed stock portfolios. In addition, several ETFs had behaved erratically during the 2010 flash crash, which raised concerns about the group’s structural stability.

Those roadblocks no longer exist. Consequently, ETFs are positioned to overtake mutual funds. That event won’t happen anytime soon, because mutual funds possess the power of history. Currently, U.S. mutual funds hold $18.2 trillion in assets, as opposed to $5.5 trillion for ETFs. But the outcome appears inevitable. ETFs offer several advantages that mutual funds cannot match, without counterbalancing drawbacks. Eventually, assets will be on their side. 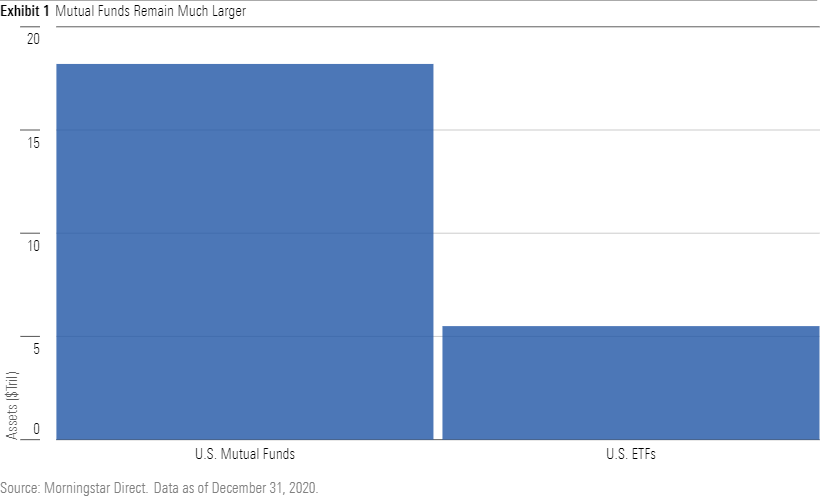 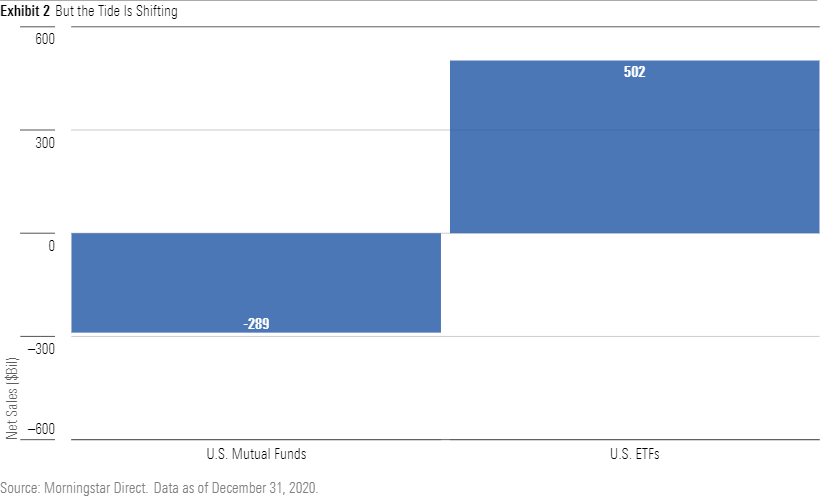 The obstacles are vanishing

The first barrier that ETFs have overcome, the inability to include either load charges or 12b-1 fees within their shares, has become an outright benefit. These days, financial advisors increasingly avoid shares that contain bundled sales charges, favouring instead institutional classes. Consequently, they have become likelier to use ETFs. And of course, institutions and do-it-yourself investors always insisted upon funds that are unaccompanied by such charges.

Over the past decade, ETFs have spread past their original investment boundaries, now offering a wide range of bond funds, as well as actively managed options. Last year, Dimensional Fund Advisors — a leading mutual fund company that bases its funds on indexes but takes enough liberties with those benchmarks to call its tactics “active”–launched its first ETFs. Next year, traditionalist Capital Group will do the same. If Capital Group likes the opportunity, even Mikey does.

True, actively managed funds have lost popularity. But capturing what actively run business does exist will nevertheless hasten ETFs’ takeover, as will the group’s expansion into bond funds. That ETFs were initially confined to a single (albeit very large) investment space does not indicate that the approach is limited. After all, indexing once applied only to U.S. equities. Those days are long gone.

It is premature to claim that ETFs have proved their construction is sound. One decade’s evidence is insufficient proof. However, it’s worth noting that not only have ETFs functioned flawlessly since their 2010 problems, but that a post-mortem of the March 2020 corporate-bond market, which was very turbulent, found that fixed-income mutual funds were a “greater source of systemic risk” than were their ETF counterparts. Each year, the concern about ETFs malfunctioning during market downturns becomes more remote.

(One thing is for certain: ETFs are better built than was the Tacoma Narrows Bridge, which survived for four months before performing this spectacular dance of death, courtesy of an effect called an “aeroelastic flutter”. This event became family lore, as at the time my mother lived a hop and two skips from the bridge.)

Of course, ETFs wouldn’t command $5.5 trillion had their attributes consisted merely of not being worse than the competition. They also possess clear benefits, the most obvious which is their ability to transact with a moment’s notice. (It would be strange indeed if exchange-traded funds did not trade on exchanges.) Unlike mutual funds, which exchange their shares only daily, ETFs are constantly available.

For most, the benefit of this additional liquidity is more theoretical than actual. Few will feel the need to transact immediately, and fewer still will profit from the urge. That feature primarily serves institutions, particularly those that use ETFs to hedge their portfolios. Still, alacrity is never a bad thing. And on occasion it can be very good, as with the sad tale of my friend, who exited his former employer’s 401(k) plan last March, thereby missing a 10% stock-market rally while waiting to reinvest the proceeds, which he received a full week later.

In contrast, ETFs’ transparency is no illusion. With the exception of a small coterie of nontransparent ETFs–which have not impressed Morningstar’s director of global ETF research, Ben Johnson, who calls such funds “a solution in search of a problem”–ETFs publish their portfolios daily. This practice not only helps to avoid surprises, but it gives researchers more information, so they can better evaluate funds’ performances (and determine whether those funds violated their prospectuses, should problems occur).

Also tangible is ETFs’ tax advantage. Although ETFs distribute income in same fashion as mutual funds, their ability to create and redeem their shares “in kind” reduces their capital-gains payouts. That makes them more tax-efficient than similarly positioned mutual funds. While it’s true that legislators could devise a regulation to close what effectively is a tax loophole, that possibility seems slight, given that legislators have accepted this approach for almost 30 years.

What will happen to mutual funds?

Mutual funds will not disappear. They will survive on sheer inertia for at least several decades, as their annual net redemption rate is but a fraction of their enormous bulk. Furthermore, they will remain a mainstay of 401(k) plans for the foreseeable future, because 401(k) record-keepers struggle to handle ETFs. (This difficulty is largely operational rather than fundamental.)

Also, as Morningstar’s Jeff Ptak reminds me, ETFs cannot close their doors to investors. In contrast, those who run mutual funds may, without the delay of requiring shareholder permission (which is mandated for several other varieties of fund actions, such as altering the fund’s prospectus or merging into a sibling), decide to no longer accept new assets. As a result, mutual funds remain the better choice for niche investment strategies that face capacity constraints.

These are, however, but quibbles. The broad direction is clear — as clear as the ultimate triumph of indexing was 20 years back. The age of mutual funds is passing. The age of ETFs is coming.

The most over- and under-hyped benefits of ETFs

Here are some other recent posts you may have missed: